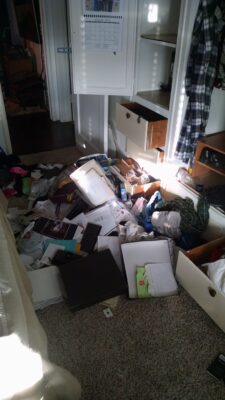 Burglars went through every room of two Hermosa Beach Strand homes and emptied drawers and cupboards looking for valuables.

A Hermosa Beach couple thought they were doing the prudent thing prior to a weekend vacation when they put their pink slips, passports, bank books, saving bonds, loan documents, Social Security cards and $500 in cash in a safe on the second floor of their Strand home.

“We were mostly concerned about a fire, but also about burglars,” said the husband, who asked not to be identified.

But instead of protecting their valuables, they made the valuables easier for burglars to steal. When they returned home Sunday afternoon, they discovered their 300 pound safe was missing.

In addition to personal documents and cash, the safe contained a WWII pistol valued at $10,000.

Other stolen items included a five-gallon glass water bottle the husband had been filling with coins since 1970 and six Corona beers that had been in the refrigerator.

The husband said the burglars appeared interested primarily in cash and jewelry during their ransacking of the house. They left behind credit cards and two new iPads, still in their boxes.

The burglars broke into the house Saturday night or early Sunday morning by smashing a leaded glass window in the front door and reaching inside to undo the deadbolt. The brick used to break window was left on the living room floor.

The next door house, whose owners were also away, was also broken into between Saturday night and Sunday morning. Their safe, which had also been upstairs, was found on the couple’s bed, along with a brick. Several thousand dollars in jewelry was taken.

“We’re guessing they shook the safe and concluded it was empty, which it was,” the homeowner said.

Hermosa police are investigating the burglaries.

Hermosa Lock and Key owner Frank Halberstein advised homeowners with safes to bolt them down.

“If they’re not bolted down, they’ll be moved, no matter how heavy they are,” he said.

Halberstein said he knew of two local bars whose safes were stolen after being left loose during remodels.

“If you don’t have a safe, wrap your valuables in aluminum foil and put them in the freezer,” he advised. ER