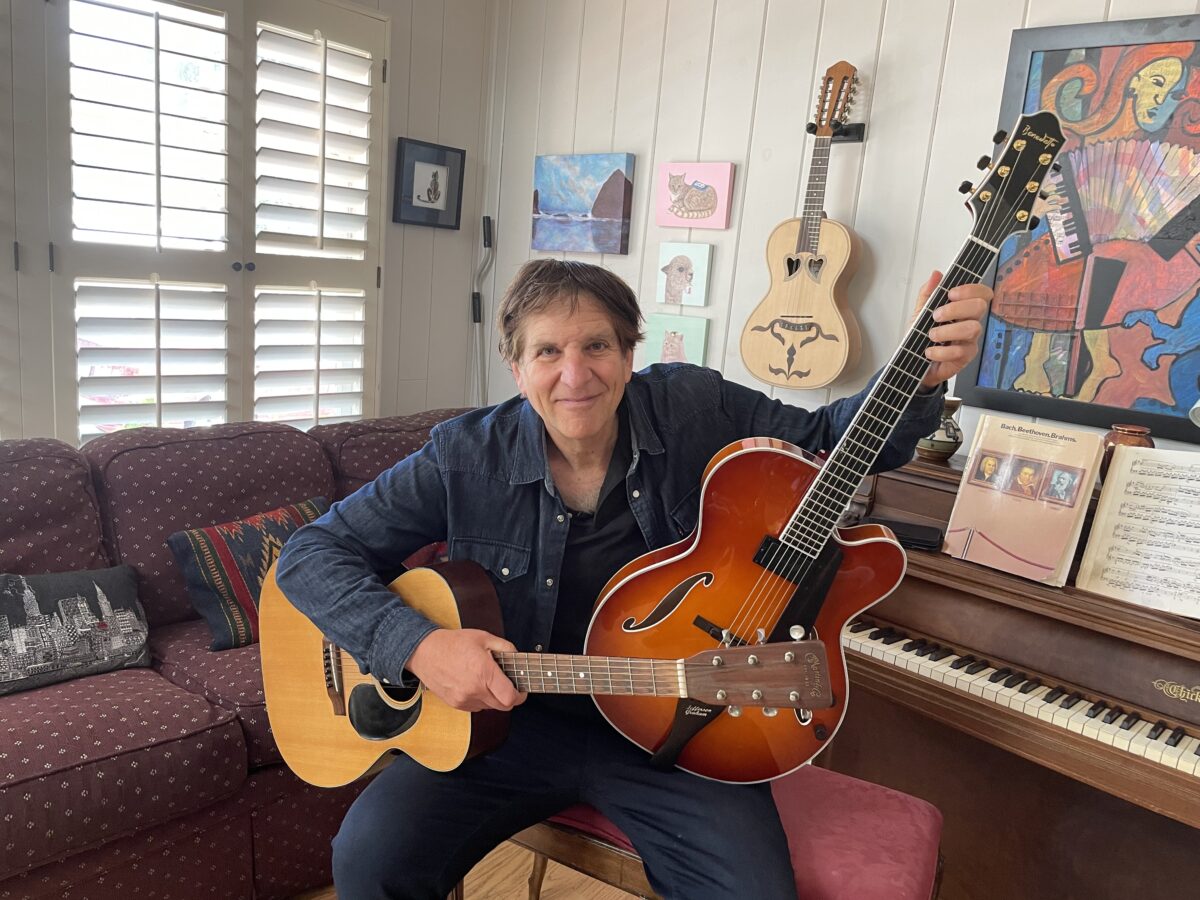 Jefferson Graham, holding two of his guitars, a Benedetto Bravo Deluxe and a Martin, with an import from Portugal behind him

Jefferson Graham, holding two of his guitars, a Benedetto Bravo Deluxe and a Martin, with an import from Portugal behind him. Photo by Ruth Stroud

You can never have enough guitars.

Even in a home with ten of them hanging on the walls, resting on couches, standing erect on the ground in guitar holders, I feel I’ve only just scratched the surface.

My friend Scott Kelby has 40 of them. But that’s nothing. The great guitarist Billy Gibbons from ZZ Top has 450.

Still, to have ten guitars in a small beach cities home begs the question I get often: “But Jeff, do you actually play all of these guitars? And why do you need to have so many of them?”

I’ll answer these in a second, but first, a hearty welcome to a new Easy Reader feature about crazy people like me and the things we collect. I’ll chronicle your stories every month, introducing you to passionate South Bay folks who love everything from classic cars and cameras to vintage shoes.

So, second question first. I have so many guitars because every guitar is different. It really is.

It starts with a vintage 1950s era Gibson ES-125, a hollow body archtop that was known for playing jazz back to the 1940s and guitarists like Charlie Christian and Freddie Green. It produced a warm, mellow tone.

For rock and roll, I have a Fender Telecaster, the model Bruce Springsteen had strung around his neck on the cover of his landmark “Born to Run,” album. Other notable Tele players have included Jeff Beck and the late blues legend Muddy Waters.

I have a custom made nylon string model made by Kirk Sand of Laguna Beach that’s cool because you can play it acoustically, or plug it into an amp for electrification.

A steel string from Yamaha that has a unique technology in the wood that brings in reverb sound without electronics.

And a rare handmade Portugal guitar (called a viola) that I discovered on a recent trip to a local guitar store. The clerk asked if she could help, and I said yes, “I’d like one of everything please.” 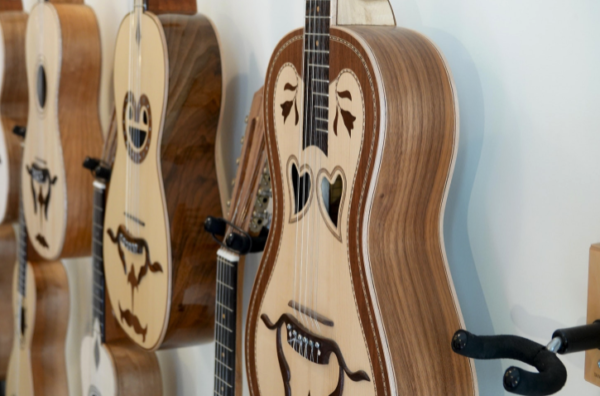 I discovered that Portugal “violas” (not to be confused with a Fado guitar) are widely different, and each model represents a different region of the country. The one I did buy is called the Viola de Amarante, and it hails from the northern Douro region, where the two hearts of the body are believed to be linked to a love story involving a medieval troubadour.

So travel mementos, mellow tone, rock and roll and a huge difference between nylon strings, which sounds softer and are easier to play, and the harsher sound of the steel string, most associated with bluegrass and country music.

My latest is another custom model, my most beloved, a Benedetto Bravo Deluxe, which is like the Gibson ES-125, in that it’s made like a violin for jazz, but feels better on the fingers and has better reproduction through an amp.

So why don’t I just ditch the ES-125? Never. It’s an old friend, it’s beautiful and I enjoy looking at it every day.

Do I play it every day? Of course not.

But I do go back and forth between models often. Because again, every guitar sounds different. I did a klezmer jam with local musicians Lisa and Larry Kohorn on clarinet and violin, and the steel strong just seemed most appropriate. For jazz recordings (please check my YouTube) I’ve been hitting the newest guitars, the Benedetto and the Sand model. But the other day I picked up my Martin, which is a traditional steel string, because, why not?

Meanwhile, there are so many more guitars I’d love to have. A 7-string Benedetto (most guitars have 6 strings,) a classic Gibson LesPaul for rocking out, a Gretsch with a whammy bar for tremolo, a 12-string steel….and on and on it goes. Like I said, this will ever end.

Readers: let us hear from you about your collections! Write me jeffersongraham@gmail.com and please subscribe to my newsletter, http://jeffersongraham.substack.com