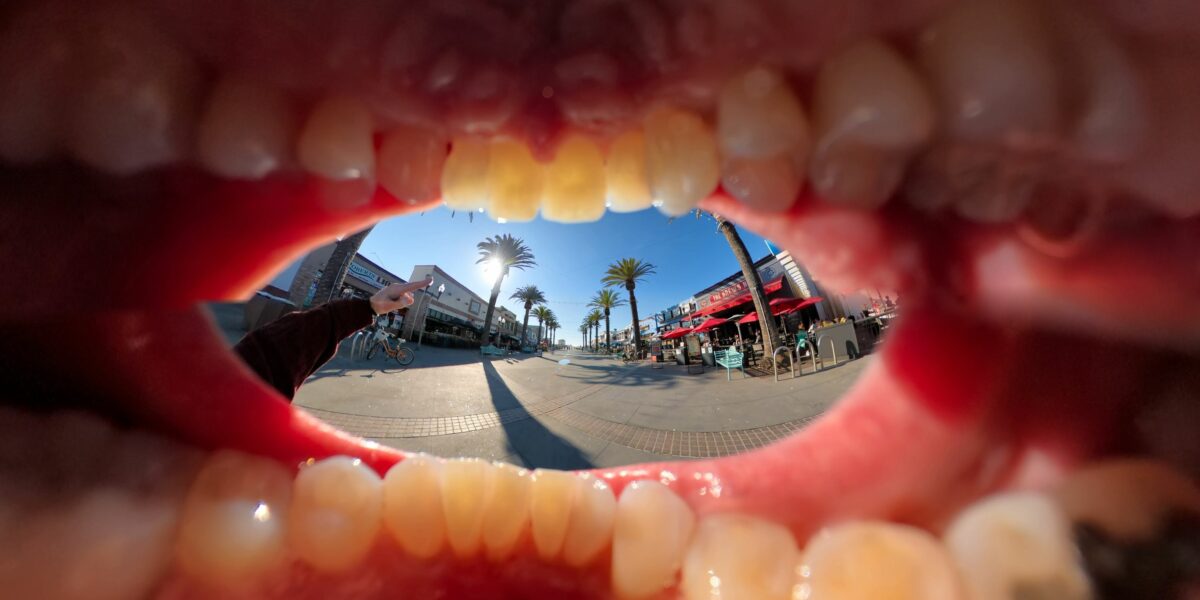 Honorable mention "Getting a Bite on Pier Plaza" by Warren Barr

“It was many and many a year ago, in a kingdom by the sea,”

“We’re out of blueberries!” Chef Thurman bellowed. The Pancake House wasn’t normally open on Christmas Eve, but a lucrative deal had been struck with retired police officer Ray Cozy, CEO of the Hollywood Riviera Santa Crawl.

“Curbside!” Thurman hit the bell so hard it clinked instead of dinging.

“You’re going to kill that poor bell,” Dolores said. She tapped her rhinestone Christmas tree earrings to make sure they were still there. She picked up the order, then hesitated.

“I’ll take the blueberry run. You need Charlie. Besides, my old English Lit teacher is bothering me again. Maybe he’ll be gone when I get back.” Dolores tried to hide her distress.

“He will be. I’ll have Ray talk to him.” Thurman promised.

Old man Van Tilburg had chased Dolores around his desk and gave her a bad grade for refusing his advances. Two years ago..

“She’s not your little Lolita. You need to leave that girl alone,” Cozy said as he pulled his Santa beard down, and tucked it under his chin.

“I offered to write a letter to the school board saying she deserved an ‘A’,” Van Tilburg said. He  crumpled a paper he didn’t want Santa to see yet.

“She doesn’t want anything from you. She quit school because of you. Here’s a to go box. Pack up your pancakes and go. When I get back from the pissoir you better not be here.” Ray pulled his Santa beard back up and disappeared into the swirling sea of drunken Santas.

The lookout paced like a panther on the balcony of a condo with a view of the construction site and the parking lot.

“It’s never open at night!” Valentino whispered angrily into his phone. He glared at the Pancake House as if it was open just to spite him.

“We’ll wait,” Payton accepted the situation. The only open vehicle exit from the construction site was through the Pancake House parking lot. They had to move the body before Christmas morning. That was the deal.

Valentino threw one leg over the balcony and grabbed a eucalyptus branch.

The cold wind churned the buttery marigolds in the planter in front of the Pancake House. Dolores was thinking she might take the shortcut to Smart & Final on foot, through the construction site when she heard a terrible noise. It sounded like lightning split a tree.

A Santa vomiting beside the bus saw Valentino climb into the tree and swing over the retaining wall. Valentino was easing down into the parking lot when the branch he was standing on snapped.

“Whoa! You alright buddy?” The nauseated Santa yelled and then passed out from the exertion of using his lungs.

Valentino sat on the ground slapping his face. It was covered with the powdery scales from the wings of the Jealousy Moth, aka the Great Ghost Moth. With a wingspan of twelve inches, it had completely covered his face then disappeared before he had a chance to see what hit him.

Valentino and Payton loaded the Senator’s niece onto the bed of their white tool truck. Silvia had been entombed in the column of concrete under the sidewalk since her disappearance from the discotheque on New Year’s Eve all those years ago. She’d danced to Atlanta Rhythm Section’s “IMAGINARY LOVER” but she didn’t win the bikini contest that night. The winner was a vulgar girl who repeatedly stopped dancing to point at her privates. Silvia was too demure for the crowd but she was the killer’s type.

“What’d you just say?” Valentino was still annoyed from his fall.

“Crazy old fart paid us in peyote buttons,” Payton repeated. “Did you put camouflage on your face?”

Valentino didn’t answer. He wasn’t in the mood to admit he fell out of a tree and he had no idea where the irritating gray powder came from.

They waited in the truck between the dirt hills like a couple of moray eels hiding in a jetty.

“Where’s Dolores with those berries?” Charlie complained. Thurman checked the phone app. No charges had been made at the Smart & Final. Her car was still in the parking lot.

Ray Cozy stepped outside and put a brick on the clattering aluminum coffee break table by the kitchen door to stop it from inching away like a crab. He tried unsuccessfully to light a cigarette. The wind strung like flying razors. He couldn’t believe his irritated eyes when he saw Van Tilburg in the distance emerging like a zombie from a chorus line of porta potties at the construction site.

“I thought I told you…. what is that in your hand?” Ray interrupted himself when he recognized Dolores’s Christmas tree earring.

“I found it,” Van Tilburg said with a repulsive lilt.

“How? It’s pitch black out there.”

The FBI showed up before Ray had the chance to call the police. An anonymous witness had called them from the Pancake House with a hot tip.

Thurman was asked to explain the pink highlighter on his chin. He pointed to the garlands of mistletoe draped about the Pancake House.

An FBI agent examining the Pancake House takeout records found the White GMC Savana on the list. It pretty much confirmed the Curbside Killer had abducted Dolores.

The Santa who had witnessed Valentino’s fall pointed to the eucalyptus tree. The FBI found blood where Valentino cut himself on the steel rebar jutting from a broken concrete wheel stop next to the tree.

“Hey Shephard! We got some kind of a shrine here,” Agent Farlow turned his flashlight on a spiral of hearts carved into the tree trunk. The oldest one read “Silvia and I”. The fresh one read, “Dolores and I”.

“Jesus,” Shepard’s lips disappeared into a thin line. It occurred to him that it was probably Silvia Schiller, the senator’s niece.

“There’s 38 of them,” Farlow reported. There were 38 hearts coiled around the tree.

The parking space facing the marigolds was clearly designated for CURBSIDE PICKUP ONLY. The white GMC Savana was likely already burning in the desert.

“They found the van! The girl is alive! Curbside is in custody,” an officer’s voice pierced the gloomy night. They had their man.

With most of the cars gone, Valentino and Payton figured it was time to make their escape. It was still raining hard.

Payton drove slowly over the speed bumps then hit the gas. The wings of the Ghost Moth had finally dried enough for it to fly again. It flew out of Valentino’s coat where it took refuge from the rain after he destroyed its home in the bark of the eucalyptus tree. It startled the men.

Valentino and Payton were killed instantly by a speeding big rig on Pacific Coast Highway.

The Ghost Moth like the Ghost Eucalyptus was not native to California. Its eggs came to the Hollywood Riviera from Queensland in the pages of a vintage collection of the works of Edgar Allen Poe.

“Merry Christmas,” one officer nodded to the other as they cordoned off the crash site and took photos of the portion of skeleton made visible when the pillar of concrete cracked.

Curbside was in custody but it would be the new year before they extracted Silvia’s purse containing the handwritten copy of Edgar Allen Poe’s “ANNABEL LEE”.

“Those dead boys out there on the highway did not kill these girls,” Shephard enlarged the photo on his phone of the hearts coiled around the tree.

“There is some kind of harmonic convergence of killers happening tonight,” Ray Cozy agreed.

“Curbside did not kill these girls. Son of a bitch probably saved Dolores by removing her from the scene.” Agent Shephard shook his head.

“I think Dolores might well need some more saving. I’d like to hear that tipster call. By any chance does the guy have a creepy voice?” Ray suspected the killer had purposefully used the FBI.

Professor Peyote admired Silvia’s VIP Card from Annabelle’s Discotheque, then carefully put the treasured trophy back in place with the second rhinestone earring that he hadn’t turned over to Ray Cozy. Van Tilburg drifted to sleep in his train compartment planning his return to the Hollywood Riviera to collect his darling Dolores. ER