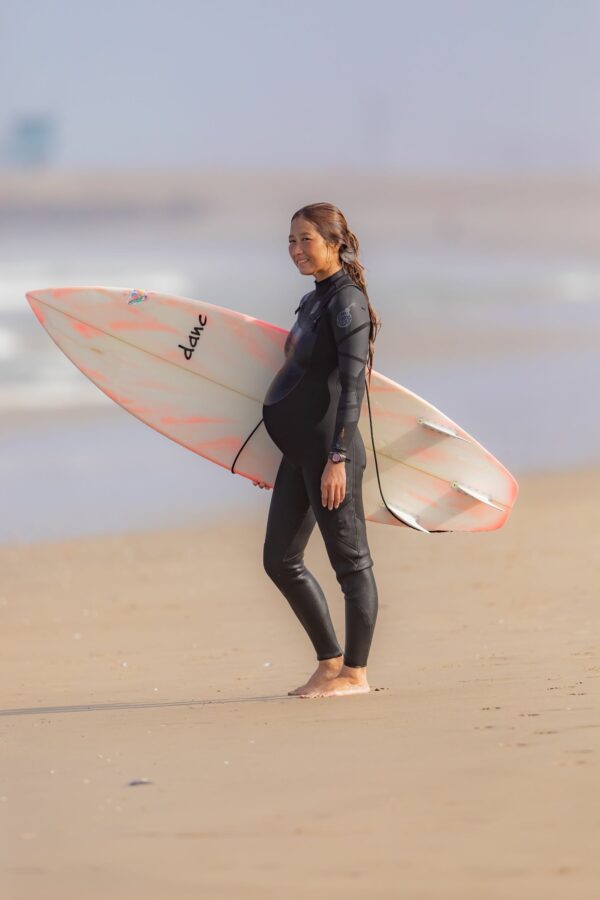 Honorable mention “Baby on Board, Maki Namikawa,” by Dave Weldon

The setting was serene, until the wind came up

At 5:37 a.m. the sun pulls itself up by its bootstraps, penetrating the lower quadrant of my window, and straight into my eyes, an interrogator demanding a response,

I’d made the mistake of keeping the curtains open last night so I could gaze at the starry night free of the fog, and light pollution so prevalent in our beach community at home. When I didn’t immediately respond, the sun shrugged its shoulders and moved on, capturing a mist that rained down on the willows who were busy weeping, while sweeping the grass. The ensuing dew hissed at the heat that threatened to vaporize it. On this almost summer day, the birds and the bees oversee the arc of the trees and the valley, the vast vessel that births rows of grapes snaking through the tilled soil, warmed by the fiery star that radiates life into our lives. As doves, sparrows, and starlings confer commentary on the state of events, the sun strikes a glistening strand of spider’s web, undulating to the beat of a soft breeze, and the concert begins. A rooster skats, a crow caws counterpoint, mockingbirds mock in double-time, a dog barks off key, and a woodpecker taps percussion. This is nature’s wedding gift to my daughter on her Big Day. But she notices none of it. My cell phone interrupted the interlude, with a voice I knew too well.

“Who the hell came up with this tradition that the bride has to sleep in a strange house all by herself the night before the wedding? I kept hearing noises, like someone was breaking in and couldn’t sleep, and now I have bags under my eyes the size of canyons, and look like crap. I made coffee and there’s no half and half. Where did Benny put it? And where are the mugs? Who the hell furnishes a bridal suite with no coffee mugs?  Mom, could you bring them please? And remind Benny that he can’t see me before the ceremony.”

Oh, I didn’t have to tell Benny to stay away. He knew.

36 years ago, I gave birth to this miracle of loveliness, my little girl. After an intense year with a team of experts that would create the “Magical Moment,” this three-day extravaganza was finally taking place on a 140 acre vineyard in the Edna Valley, 200 miles from home. In addition to my monetary gift, I vowed that I would do all I could to make their wedding weekend a success, including keeping my mouth shut. Decades before, I’d planned both my weddings, and wondered why so many pay so much to hire a stranger to orchestrate one of the most important days of their lives.

What I really needed was a marriage planner, but that’s another story.

After changing into sweats, I knocked on my son’s bedroom door. He remained in a state of oblivion. Lucky him.

“What?,” barely lifting his bed head.

“Mabel made coffee. She couldn’t sleep, she’s anxious, she needs mugs, I’m going to talk her down.”

“Good luck with that,” he said before easily slipping back into unconsciousness. Griffin soon learned how to handle family drama by moving half a world away.

“If you need to talk, we can always Zoom, mom. It will be like I’m right there,” he assured me. But for the next three days, he had no choice. He was involved with

I hiked the long hallway that leads to the open concept dining room, living room, and kitchen, spilling into the rest of the six bedroom, seven and a half bath ranch style home. It is big enough to entertain 100 guests. There are four homes dedicated to housing the wedding party, but many more buildings occupy the impeccably groomed property:  Stables, vintage barn, anew barn, homes for the caretakers, multiple garages, an entertainment hall that holds 300, an office for four employees, and a henhouse. Even that was impressive. In addition, there were fields that hold cattle, horses, goats, and a herd of emus. There was also a pond and small field where the ceremony will take place. The vineyard began as a dairy over 100 years ago, as did so many other properties on the Central and Northern coasts of California and Oregon.

Grif and I chose  bedrooms that shared a bathroom, leaving Benny and the bridesmaids, and their usher husbands to occupy the ensuites. Benny’s best man and his new boyfriend took the room with the view. In the north wing is an enormous game room, with a full-size bar, giant TV, oversized leather couch, and a ping-pong and game table, where we gathered nightly.  Benny’s mother, father, sister, and grandmother occupied the south home, the Maid of Honor and husband, the west one, and to the south, is the one-bedroom bridal cottage where Mabel spent a harrowing night. It sits adjacent to a pool, patio, and BBQ.

I grabbed the mugs, the milk and my camera, and left to visit Mabel, a three minute walk down a manicured path. For 13 years, she and I lived across the street from one another. Mom bought her home about the same time I bought my own. After updating and renovating every square inch of the two-bedroom historic bungalow, mom enjoyed her final five years living safely near me, her son-in-law and grandchildren. The oversized kitchen looks out onto a verdant backyard that I mowed. After mom died, Mabel and her boyfriend moved in. She earned her degree in music performance, then found a job teaching voice and piano in a private school. We shared the care of dogs and cats, and celebrated holidays and birthdays at her home and mine, cooking and baking for families and friends. We supported each other during the worst times, including the sudden death of her father, my second husband. I spent countless hours in her kitchen having breakfast, sharing coffee, discussing politics, and solving the problems of the world. She’d play piano and I’d sing along. Shortly after I met Gary, she met Benny, but it almost didn’t happen. He was a nerd, not the usual flashy type that attracted her. He was also thoughtful, and kind and listened to what Mabel had to say. He called when he said he would, and he was never late. For once, she chose against type, and won the jackpot. Now I think of him as one of my own.

Today, Mabel and I shared coffee. I listened, and we discussed the events of the day.

Delightful and entertaining make-up, and hair ladies soon arrived, and worked their magic on us six women. I took photos of everyone and everything, planning a wedding book that I would give to Mabel and Benny for Christmas. The photographer captured the rest, the rings, the bridesmaids, Mabel’s sparkly shoes and her wedding gown.

By 3:15, we were dressed in varying shades of pastel, a nice contrast to Mabel in her elegant white lace dress, and floor length veil, circled in crystals, her waist length hair curled to perfection. The photographer took them outside for more photos, taking advantage of the landscape as a background.

And then, out of nowhere and uninvited, the idiot wind arrived. It came charging through with no regard for bridesmaids in chiffon dresses and high heels navigating through thick grass, groomed grooms waiting by a tall wooden altar the wind pushed over, and harrassing guests who traveled hundreds of miles to celebrate this once-in-a-lifetime, allegedly joyous event. The wind wickedly picked and pulled at every curl that had been carefully arranged. Mabel’s diaphanous veil twisted in the gale, her Maid of Honor trying in vain to wrap it around the curls that remained. And then came the tears. Already frazzled, this new event pushed Mabel over the top. Elizabeth, a bridesmaid and wedding veteran, took her aside and assured me that she would be alright. It was time for someone besides me to help. With the ceremony just 15 minutes away, the rest of us filled golf carts that transported us. Once there, I found Griffin, dressed in his navy blue suit, and turquoise tie groomsmen uniform. The other men took their places up front and the rest of us waited behind the guests.

We all waited for the bride. The guests sat serenely on a soft carpet of grass near the pond while the wind continued to do its worst. Enchanted in the moment, no one cared. Then, when I turned around, I saw Mabel walking toward us, escorted by St. Elizabeth who delivered her to her brother and I. Her eyes were dry and she was smiling, a few curls left in her hair, protected by the veil. The Maid of Honor and bridesmaids began their slow procession up the aisle, the audience turning to look at them, a march of the flowers. Mabel linked arms with Griffin, a stand-in for his dad who seemed to be making his presence known in the dramatic wind. It was just like him, waiting until the last minute to protest, making a fuss about letting her go. As Mabel stepped carefully on the unsteady terrain, her brother held tight to her arm, and guiding from behind, I held her veil. As she took her place beside a glowing Benny, a kind of calm descended on the gathering. It seemed as if a reconciliation had been reached, and the wind blew away.

Later at the reception, Griffin’s toast to the happy couple brought the crowd to their feet, “…and there was less crying than I expected.” Drama, yes, but not too much. ER