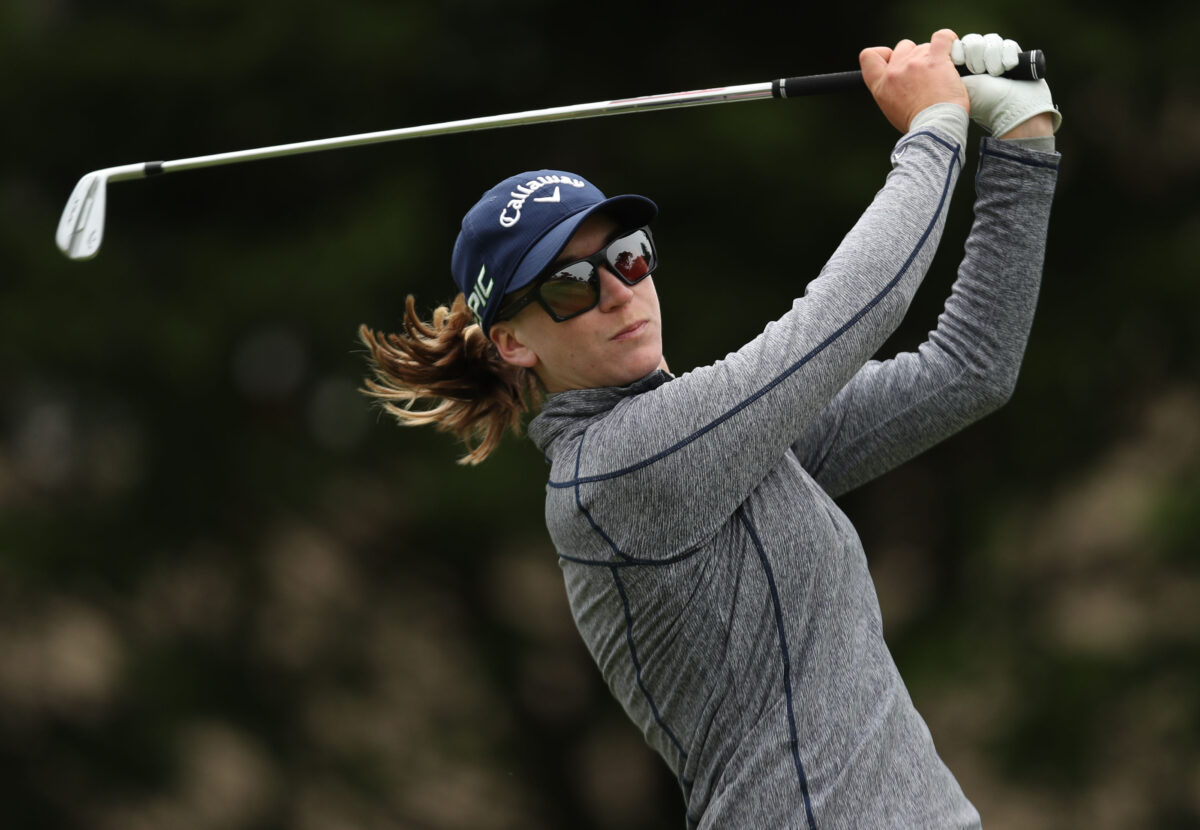 Jenny Coleman on the third hole in the final round of the LPGA Mediheal Championship at Lake Merced Golf Course in Daly City, on June 13, 2021. (Photo by Jed Jacobsohn/Getty Images) 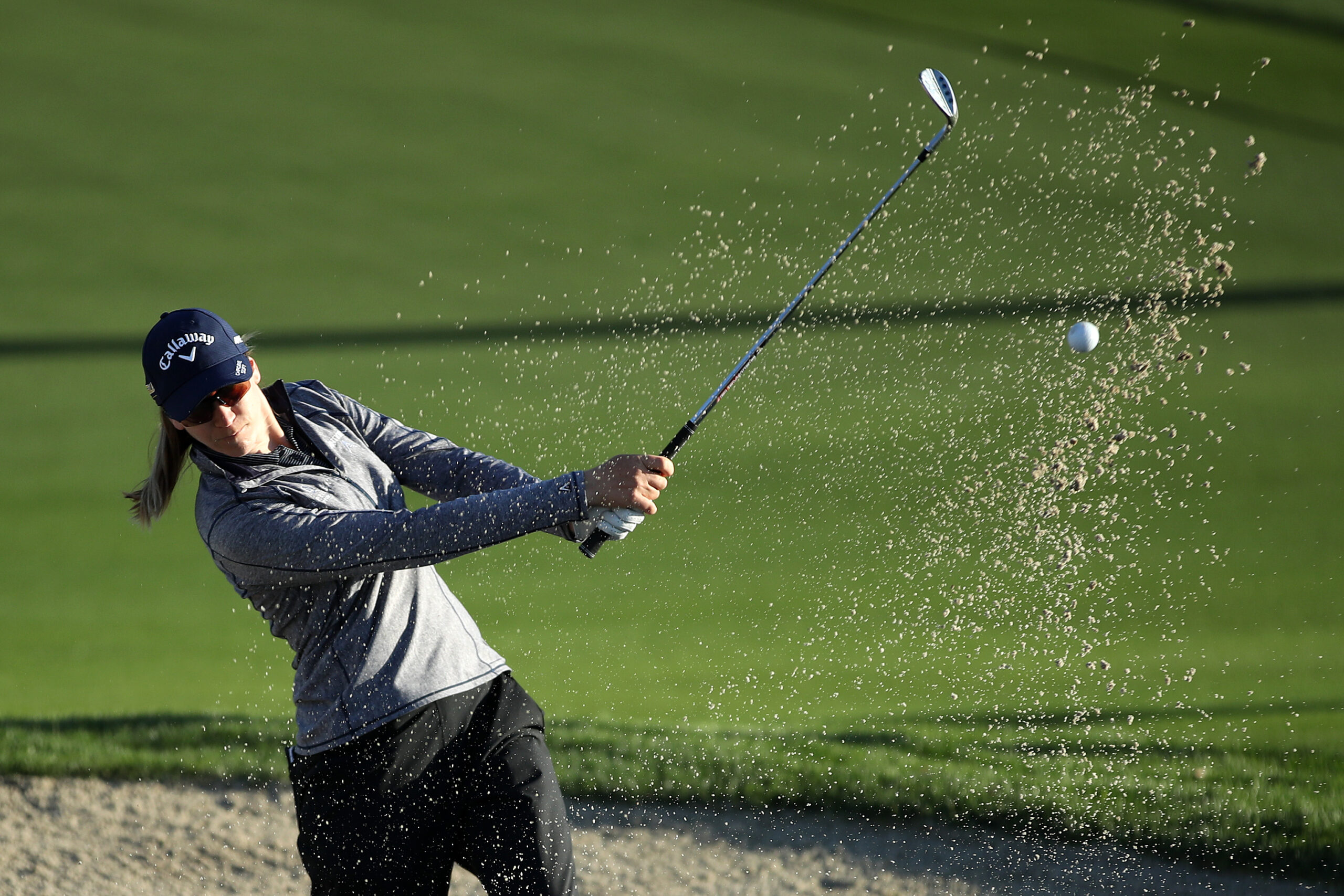 Jenny Coleman hits from the bunker on the 10th hole during the first round of The Chevron Championship at The Westin Mission Hills Golf Resort & Spa on March 31, 2022 in Rancho Mirage, California. (Photo by Katelyn Mulcahy/Getty Images)

Pro golfer Jenny Coleman will have a rare opportunity to play at home when the LPGA (Ladies Professional Golf Association) tour comes to the Palos Verdes Golf Club, April 28 through May 1.

“It will be nice playing a mile from my house. It will be nice to stay at home for the tournament,” said the four-year veteran of a pro tour that winds its way, course to course, across the US and abroad.

“It’s exciting that it will be close to home and all that, but you have to treat it like every other week, keep the same routine and all that,” she said.

“I’m going to enjoy the experience. It doesn’t happen every year,” she said.

Coleman said the presence of friends and family will not serve to make the event extraordinary for her.

“I play all over the US and all kinds of friends and family come out and watch,” she said.

Coleman tends to get stronger as the golf season goes along, and she expects to find herself hitting her stride right around tee time.

“I’ve been playing okay. It’s early in the season. I’ve got a couple of tournaments under my belt, and I usually start slowly and ramp up,” she said.

The LPGA tour comes to Palos Verdes following the LA Open at the Wilshire Country Club, allowing Coleman to drive down by car, arriving a day before the practice rounds that lead to the tournament itself.

Coleman played the Palos Verdes Golf Club course regularly while on the  Palos Verdes Peninsula High School golf team. She continued to occasionally play the course during college tournaments, when she played on the University of Colorado team in Boulder.

A couple of times recently, friends who are club members took her to the course so she could look it over, play it, and see how it has been altered since she played it last. The changes play to her strengths.

The topography will test the golfers’ creativity as they try to foresee the flight of their ball, how the geometry of the landscape affects where the ball will land.

Coleman enjoys the support and reciprocal coaching of another pro golfer who has known her literally all her life, her identical twin sister Kristin Coleman.

“We coach each other,” Jenny Coleman said. “We’ve seen each other’s swings for years, and we know what to look for. We can see what kind of deviation appeared, pinpoint which aspect shifted.”

The Coleman sisters started golfing at a very young age, when their parents took it up.

“My family all took it up when we were 4 or 5, and my parents were whatever age they were. Our grandpa on our dad’s side was an avid golfer, and he might have had some influence on that,” Jenny said.

The golf course, she said, was a special place.

“There’s something about golf. You can play the same hole on the same course and never have the same shot. And every course is different. Golf brings you to beautiful places all over the US, and you can play internationally,” she said.

“Playing a sport as a family, you hit the ball and then walk and talk,” she said, comparing the experience to less walk-and-talk family sports, like, say, soccer.

Path to the pros

Throughout her youth, the twins “played soccer and softball, and tennis for fun, a little basketball,” Coleman said. “Right before high school I started to take golf more seriously.”

The journey from childhood golfer to LPGA pro saw Coleman golfing on the Peninsula High varsity team all four years, playing amateur events the summer after graduation, then joining the University of Colorado varsity team, where she began to stand out in her junior and senior years.

After college she turned pro, playing on the Symetra tour (now called the Epson tour) before joining the LPGA tour.

In 2021 she played in 24 events, making 14 cuts and earning $292,327. She recorded three top-10 finishes, including third place at the Drive On Championship at the Golden Ocala course in Florida.

The identical Coleman twins have non-identical swings. Jenny hits the ball using a “one plane” stroke that looks about the same from backswing to swing, while Kristin utilizes a more modern stroke, with a steeper backswing and more inside-outside motion as the club approaches the ball.

“Everyone has their own unique swing,” Jenny said. “Both get the job done.”

Golfers do not so much choose to develop one or the other sort of swing, so much as they just find themselves swinging the club that way, doing what comes most naturally.

The 5-foot-9 Jenny said the shape of a golfer’s swing is influenced by factors such as their stature, and whether they use their upper body or lower body more when they launch the ball. In addition, there are “a million” other deviations in every golfer’s swing, whether they go one-plane or modern.

As the golfing Coleman twins pursue their careers, they’ve developed what appear to be complementary strengths.

“[Kristin’s] drives off the tee are very strong – she’ll hit almost every fairway,” Jenny said. “When it comes to the approaches, mine stand out a little. She uses a little more creativity, chipping. She’ll go for more finesse shots, and I’ll go for more high percentage shots.

“When it comes to putting, it’s hit and miss. On a given day it will either drop or it will not. It’s very personal.”

Jenny described herself and her sister as both having an even-keel temperament.

“We’re very similar, kind of medium. We’re neither outgoing nor quiet, pretty much middle of the road. We have the same likes and dislikes, the same hobbies,” she said.

Likes include hiking and going to the beach.

“I’ve gotten into some gardening from COVID, and doing home brew beer,” Coleman said, savoring memories of boiling, fermenting and bottling. She says she brews a good beer.

The Palos Verdes Championship, presented by Bank of America, is April 28 through May 1 at the Palos Verdes Golf Club in Palos Verdes Estates. The total purse is $1.5 million. See LPGA.com for details. PEN