A gate to the past in Palos Verdes Estates 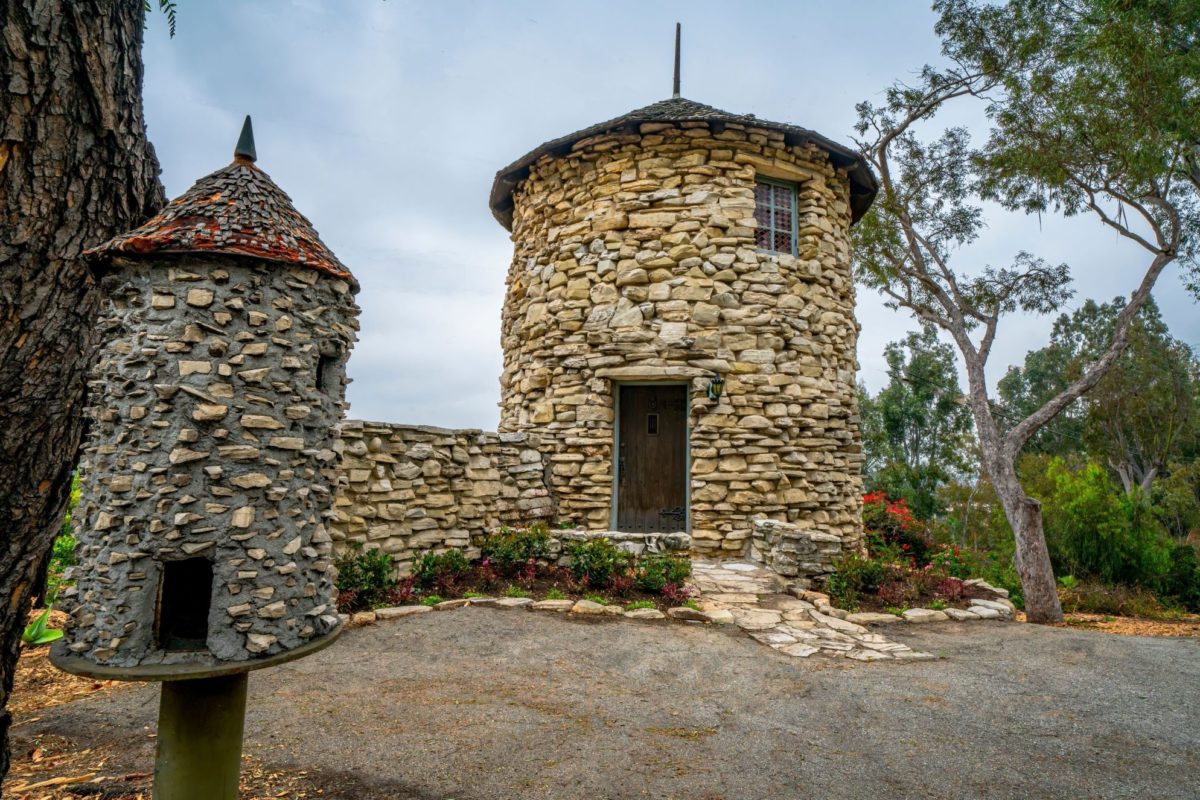 The building was originally constructed to be a gate tower and a gatekeeper lodge for the easterly entrance into Palos Verdes Estates. 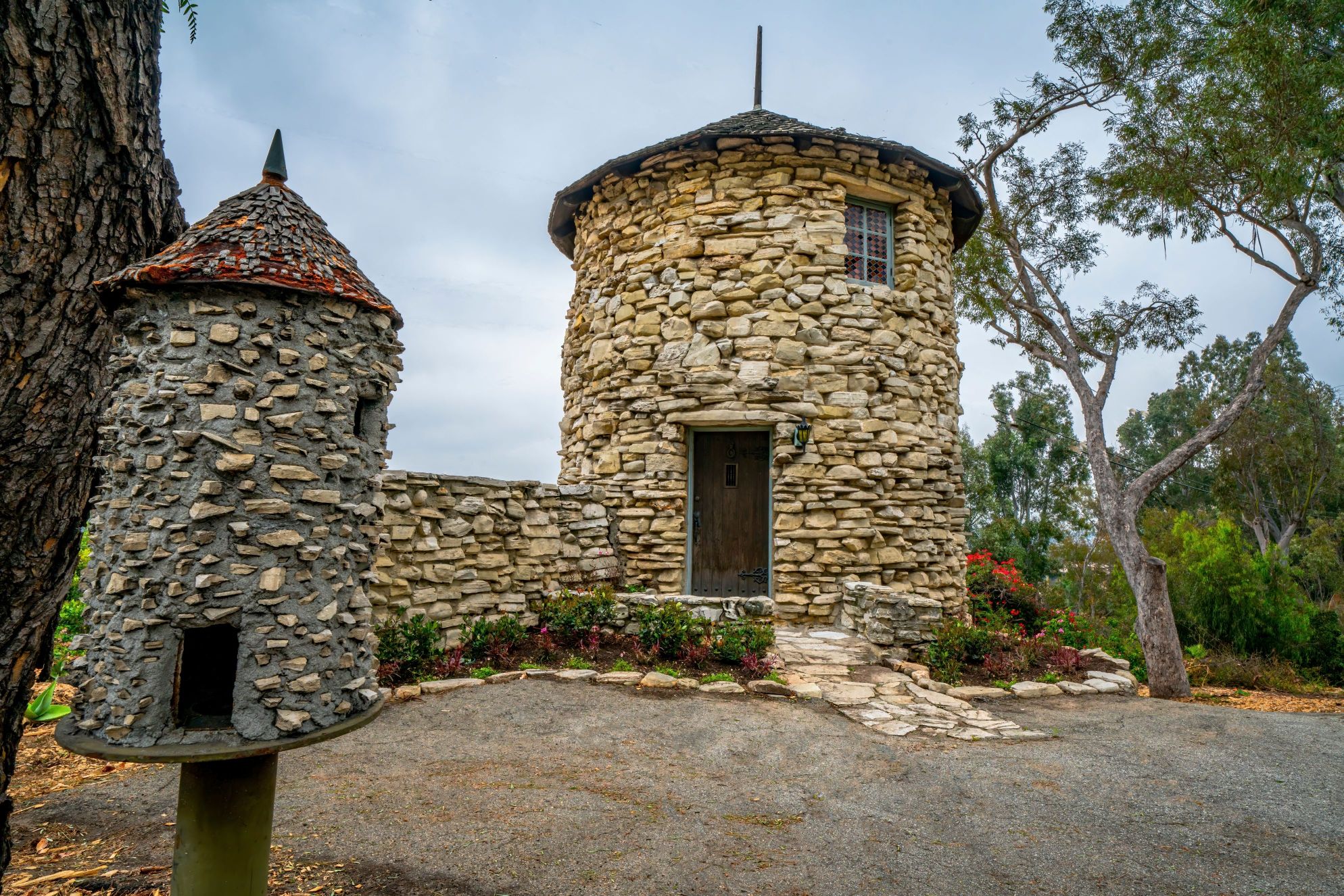 The building was originally constructed to be a gate tower and a gatekeeper lodge for the easterly entrance into Palos Verdes Estates.

Nine years after designing the reflecting pool for the Lincoln Memorial in Washington, D.C. in 1917, architect Clarence E. Howard finished plans for the Valmonte neighborhood Mirlo Gate Lodge, at 4420 Via Valmonte in Palos Verdes Estates. Howard was employed by the Olmsted Brothers, who are best known for designing New York’s Central Park. 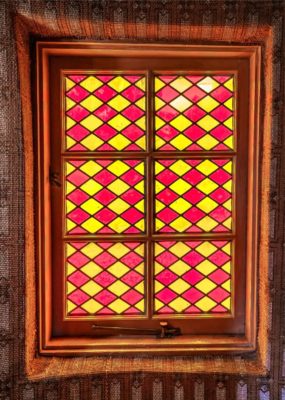 The leaded glass windows casements are deeply recessed into eighteen inch thick walls with both smooth and undulating plaster edges.

The Mirlo Gate Lodge was one of the first buildings built for the Palos Verdes Project dating back to the Roaring 20s and Frank Vanderlip’s vision for the Peninsula. Howard had a long and distinguished career following graduation from Syracuse University’s architecture program. He lived to be 93. He attended the Ecole des Beaux Arts in Paris and in 1910 became qualified as a city planner and architect. His time spent in France before and after World War I left him with an appreciation for the ancient art of stone masonry and inspired the conical stone design of the Mirlo Gate Lodge Tower, which is on the National Register of Historic Places. The architecture is described in the register application as”late 19th and 20th century French eclectic….” Its construction “is the embodiment of the ancient art of stonemasonry and techniques that are no longer handed down.” The foundation is comprised of concrete with timber support, the walls are a local limestone, called Palos Verdes Stone, set in lime mortar, and the roof is a wood shake from the Redwoods. The tower was intended to be a living quarters and guard gate for the easterly entrance into Palos Verdes Estates. The tower is approaching its 100th birthday. 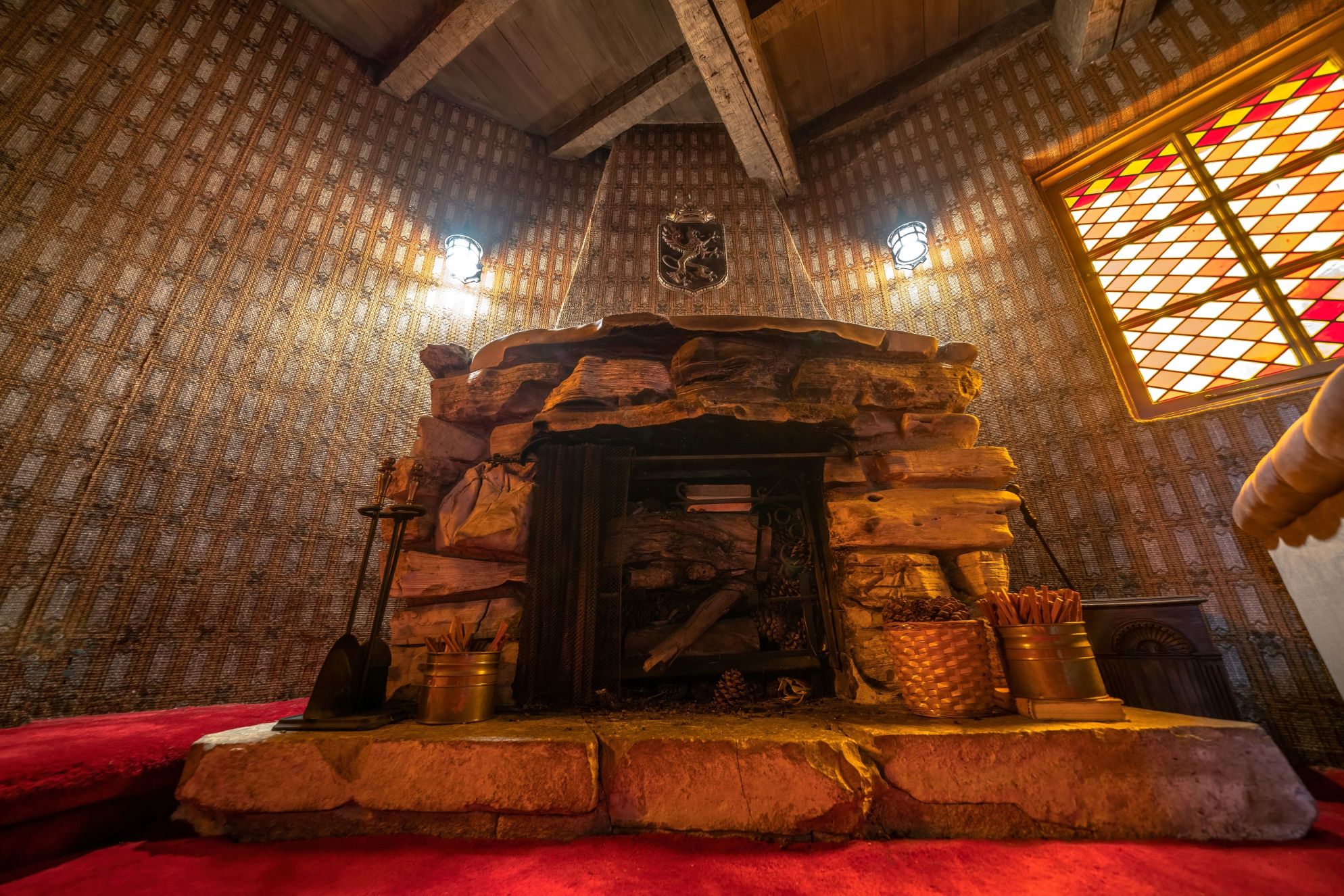 This massive and grand original fireplace and hearth is built of Palos Verdes Stone (a hallmark of Howard’s designs as he was the first to use this material commercially in building and in decoration) and is replete with an antique iron crane.

The tower is reminiscent of stone colombiers/pigeonnier/dovecote towers that were originally designed in upper Egypt and Iran and then are thought to have been brought over to France centuries later by the Romans. Pigeonniers are free-standing structures or built-ins at the end of a house or barn with pigeon holes for birds to come inside and nest. Pigeons and doves were an important food source in the Middle East and Europe, especially for nobility, and were kept for their eggs and dung. Pigeon droppings were used for tanning leather and making gunpowder. Only nobles were permitted to have a “droit de colombier” in Medieval Europe. The Roman author of the Naturalis Historia, Pliny the Elder, wrote about pigeon farms and the accompanying construction of these structures around the time of 40 A.D. 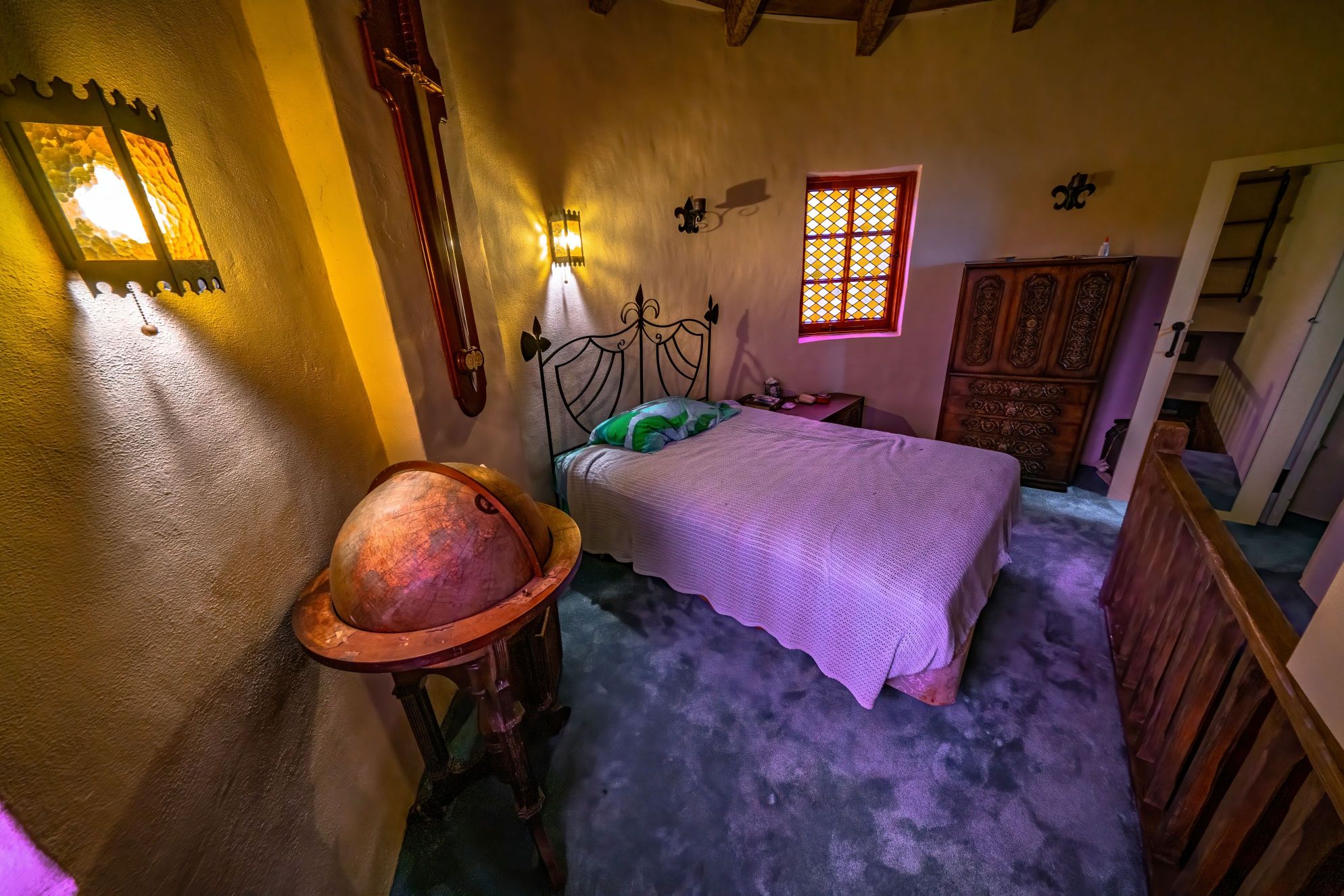 The gatekeeper’s bedroom which, according to tenancy city records, was actually used to house city employees including a policeman and a gardener.

Howard’s tower is two stories, with a basement and 508 square feet. The 18-inch thick walls are  composed completely of unreinforced masonry, a measure of the skill of the masons. The Palos Verdes stone on the exterior walls is beige and gray, with visible striations and marine worm holes. The interior walls are brick and there’s a wood beamed polygon planked ceiling. Each of the planks appear to be hand hewn “with visible scoring axe cuts and hewing adze cuts,” according to the city’s register application. There are six small, asymmetrically placed casement windows. Four of these have been replaced with a leaded glass pane with a colored diamond pattern. The other two windows have remained original. A chimney extends from the south side roof to support an original fireplace and hearth made of Palos Verdes Stone in the living room. 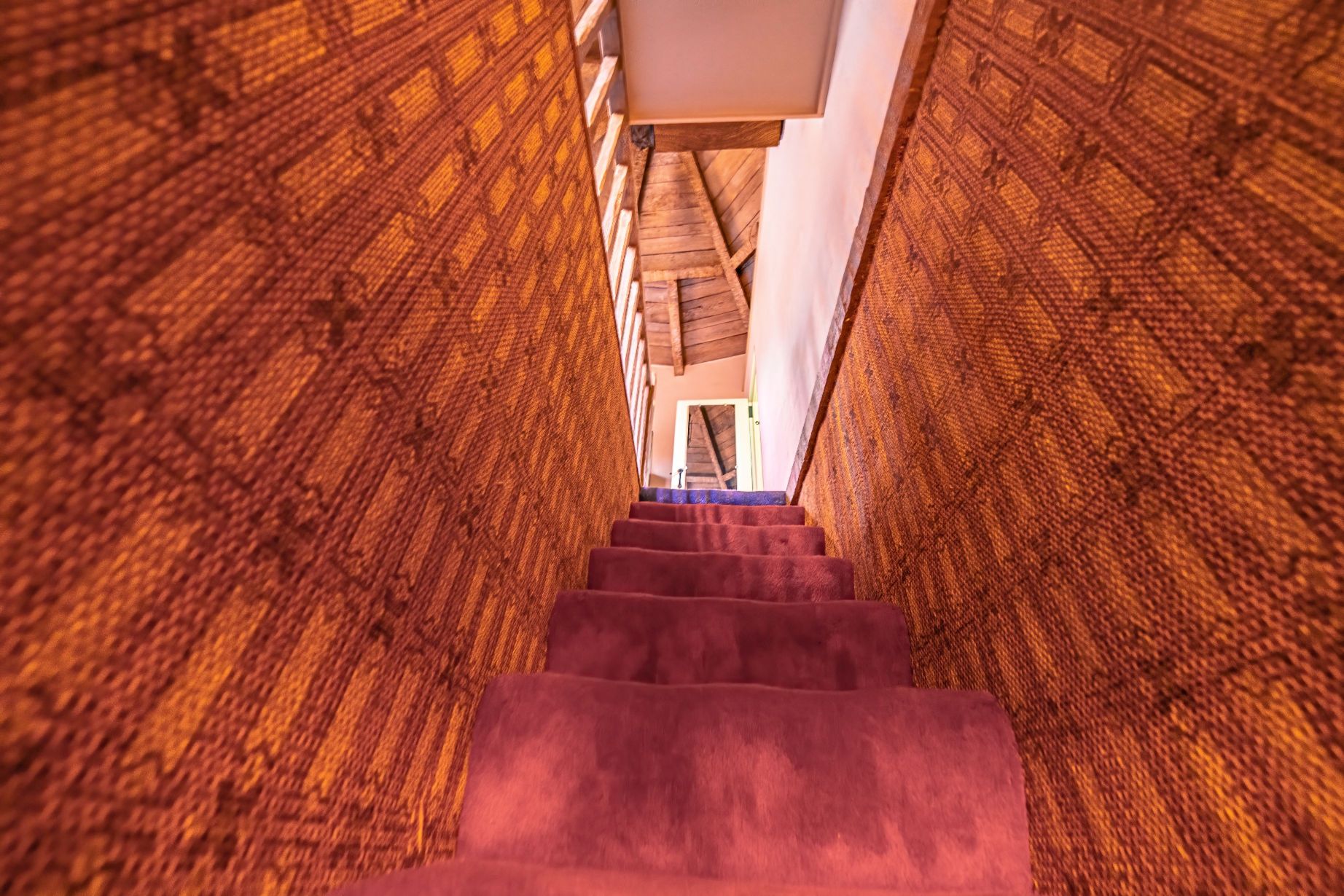 In 1966, the Palos Verdes Estates City Council stated that it was their intent to “preserve Mirlo Gate Lodge Tower as a landmark, standing as a gatehouse to the city with a commanding view of the South Bay to the north and east.” In 1988, The Rancho de los Palos Verdes Historical Society named the Mirlo Gate Lodge Tower, a historical landmark and had a bronze plaque placed at the site commemorating its history. 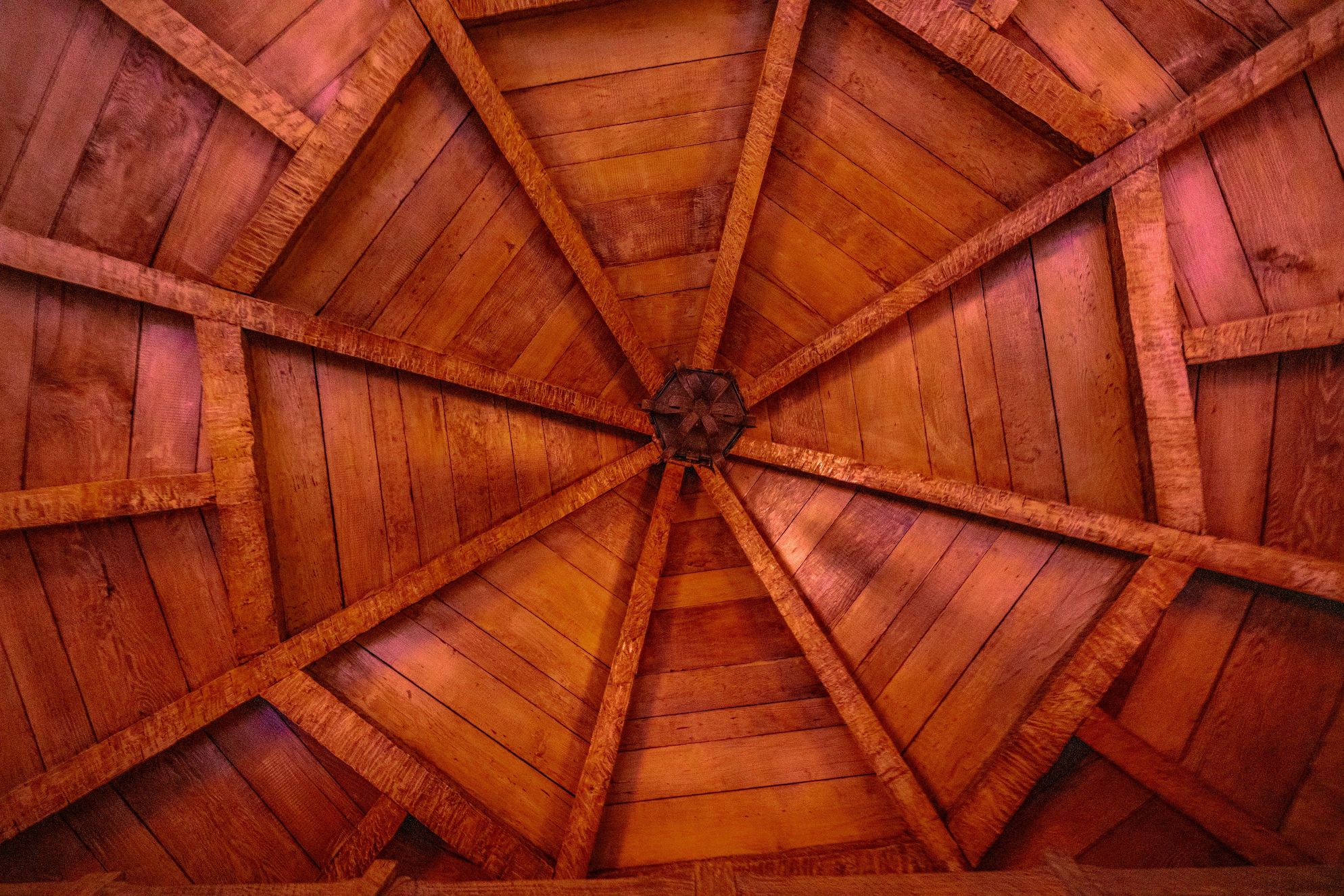 The tower’s front entrance faces west and towards the road, and is set back several feet with a landing, walkway and flower garden. A rock wall and fountain pool on the northeastern side of the property was added by a tenant in the 1970s. The pavers leading up the walkway are Palos Verdes stone. The front door is recessed with a horizontal support of timber and a landing made of a single large slab of Palos Verdes stone. The original, 1926 interior wood staircase leads to the second level where there is a bedroom and a small bathroom with a sink, toilet and walk-in shower. The cupboard facings here are original and the configuration of the bathroom follows Howard’s original design. There is a storage area that’s open above the stair landing and a separate closet, as well, on this floor. The downstairs is comprised of a sitting area with an oversized, wood burning fireplace. This historic monument was aptly named Mirlo Gate Lodge Tower because Via Mirlo was the former name of Via Valmonte. 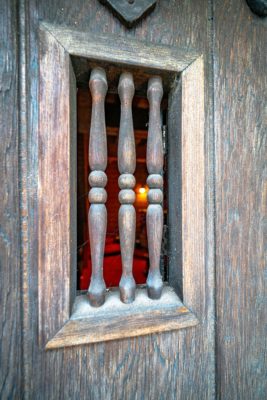 The tower door, battened and ledged with decorative wood spindles allowing a peek-a-boo view into the sitting area.

The tower is currently unoccupied and city officials say there are no immediate plans to lease it to a tenant.