A passion for pork and tradition 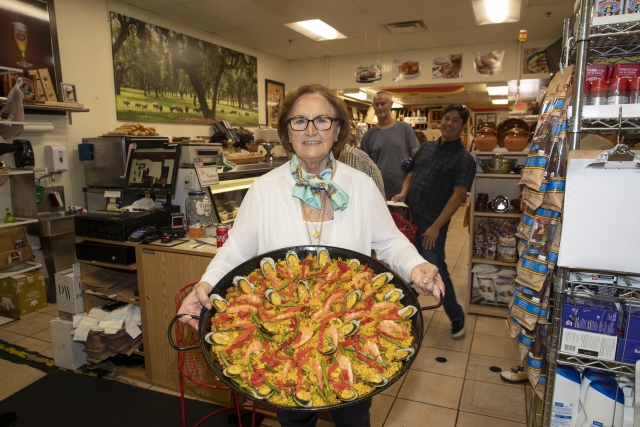 Those who cook to connect with their cultural heritage, or to recreate a meal they enjoyed in a local restaurant or on a vacation, often find they can’t get the ingredients they need at everyday markets. To replicate the flavors of other cultures  usually means a very expensive session at a gourmet grocery. We’re lucky in the South Bay, because when it comes to the cuisines of Spain and Mexico there are experts nearby whose passion led them to start businesses making authentic products right in our neighborhood. As it happens, both began with pork, though one has branched out to other things.

Though Humberto the Chori Man (story page 26) has never met Juana and Alex from La Española, it’s obvious that both of their businesses resulted from the same devotion to quality and tradition. Those who love to cook will enjoy experimenting with their products and discovering authentic flavors, even if their own heritage is different. Flavors know no borders, and we have artisans in our midst who deserve to be celebrated.

Juana Faraone didn’t learn the art of curing meats from her parents growing up in Valencia, Spain. Her father was an attorney rather than a butcher or maker of charcuterie. When she emigrated to America, Spanish food was little known, and when she bought a struggling deli in Lomita almost all her business was mail order to homesick Spaniards. The company’s first products were Spanish style sausages, morcilla and chorizo, but she soon started importing items that were otherwise impossible to find. As she remembers, she had a few customers who were begging for her products while nobody else knew or cared what they were.

“Back then you couldn’t get Manchego cheese in regular stores. Americans didn’t know what it was, but my Spanish customers pleaded for us to get it. It was the same with other things. When a customer came in and asked for something, I would write it down, and then when another asked for that I would make a note. When the third customer asked for the same thing, I would start figuring out where I could get it. I took a lot of trips back to Spain to find suppliers whose products tasted right. I knew what it was supposed to taste like, and I kept collecting recipes and trying them until it was correct.”

General Manager Alex Motamedi, Juana’s son-in-law, has heard the story of her early visits many times. He mentioned how difficult it was to get the business going, and the skepticism with which Spanish food purveyors regarded the venture.

“At that time Juana and her husband had young children, and she had to take trips on a regular basis to meet with chorizeros and butchers. When she did, they’d often laugh at her. “Sure, make chorizo in California? Good luck, here’s the recipe.” This was before the internet and Google, when you could look things up, but they gave away their secrets. They might not have been so helpful if they realized they ought to take her seriously as a competitor.”

Those Spaniards felt secure in helping her because at that time the USDA didn’t allow the importation of unsmoked, cured meats such Italian prosciuttos and salamis or Spanish hams and sausages unless the producers paid a licensing fee of as much as a $100,000, an amount far beyond the budget of artisanal producers. The law, which was intended to keep livestock diseases out of the US, wasn’t fully overturned until 2013. For many years La Española Meats had the American market to themselves, and they spent the time getting their recipes and techniques perfect. As they did, explained Alex, their customer base changed.

“We started out selling everything retail, and then our customers started telling restaurant owners, ‘If you are making paella, instead of putting andouille sausage or Italian sausage in it you should get Spanish chorizo. You should go to La Española’” We would get calls from chefs who said that their customers told them we had these products, and by the way, they’d also be interested in expanding their charcuterie platter. They didn’t call it that then, they called it a cold cuts plate, but that’s what it was. At the same time that chefs were getting interested, our retail base changed. In the early 90s we started getting local people who had traveled to Spain, loved the food, and wanted to make it at home. They got educated, and now about 75 percent of our business is Americans.”

Customers who visit the store in Lomita, or online, can choose from over 30 kinds of sausages that are dry-cured, smoked, or fresh and ready for the barbecue or sauté pan. They range from butifarrita, a fresh sausage similar to bratwurst, to the salami-like chorizo vela or the blood sausage called morcilla. There are even a few non-Spanish items; they recently started making a French sausage that was previously unavailable in California. When asked which item from her inventory is little known but would be appealing to Americans, Juana picked something that is obscure indeed, a sausage from one of Spain’s islands in the Mediterranean.

“I would say the Mallorca-style sobrasada, which is not like the Italian soppressata. It’s a very fine ground sausage that is so soft it’s spreadable, like pate or ‘nduja from Calabria. I fry it by itself, no oil because it makes that itself, and then add either cauliflower or cabbage – you could do them together, but I do them separately.”

Alex mentioned an item that is one of their imported specialties.

“Mojama, tuna belly that has been salted and dried. It’s like the Italian bottarga that you grate over soups, pasta, or salads. In Valencia they slice it thinly, put it on a plate with marcona almonds and a drizzle of olive oil, and they serve it by itself.”

You can get all the requirements for that plate, including the almonds and olive oil, by visiting La Española’s deli at their factory in Lomita. If you do so midweek you can sample some of their meats on a sandwich, and on Saturdays they offer plates of paella at lunch. Juana said that in the early days they advertised it with a hand-lettered sign on the side of the road, and on some days they threw most of it away because not enough people stopped in. Now, she says with a smile, those days are gone. 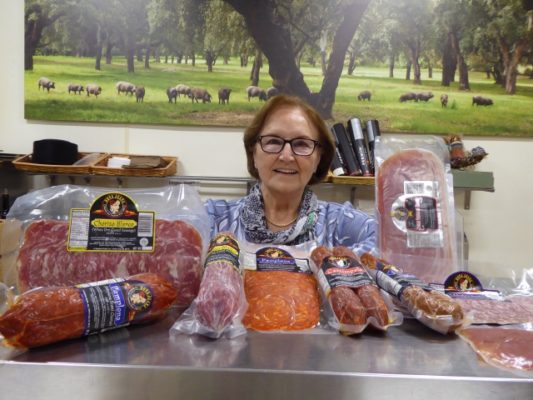 Juana Faraone with a selection of the meats she prepares at her La Española Meats. Photo

“We started serving paella in 1995, and we have never missed a Saturday unless it was a national holiday. It started for 10 or 20, but last Saturday we made it for 150 people. Most of it is to go, but some people enjoy it here. Our patio isn’t that big, so it’s best to reserve. One week a month we have a group in from Melting Pot Food Tours, and they get a tour of our manufacturing plant and see the sausage being made and cured.”

That tour is a remarkable inside look at the spotless factory where meat is chopped or ground to various stages of coarseness, blended with spices, and prepared in an amazing variety of ways. Along the way you see tons of sausage in the process of being aged for weeks or months, all meticulously tagged so that each can be traced from its moment of manufacture to the eventual sale. It’s a chance to see how farmhouse traditions are recreated in a modern space, and well worth the time.

All of the sausages that are produced here are sold under the Doña Juana label, named after Juana Faraone herself. She still keeps a vigilant eye on the operation she started with her late husband. It’s a business that was founded on an unshakeable certainty that the then-obscure flavors of regional Spain would someday be popular in the USA, and time has shown her to be right. 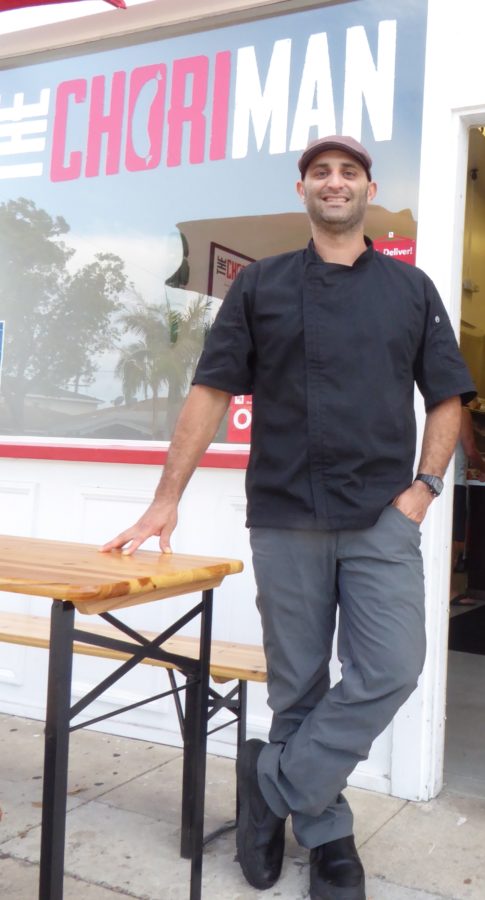 If you go into the Mexican food section of an average supermarket they will have one kind of chorizo. That will be a very finely ground sausage whose principal ingredient is “pork by-products,” and its principal purpose is to give a greasy, paprika-heavy flavor to egg and rice dishes. That outrages Humberto Raygoza, who comes from a long line of butchers and sausage makers in Zacatecas.

“If you look at the label of chorizos by the big companies they name it Mexican, but there’s no actual region of Mexico where they eat a sausage like that. Nobody seems to know where this style comes from*. They’re mixing scraps of meat with fillers like lymph nodes and glands that should be trashed. When my grandparents and great-grandparents were making chorizo they used all the meat that was left on the bones after the big pieces had been cut off. It was good meat, every bit of it.”

Humberto was born and raised in the Antelope Valley but stayed with his grandparents in Mexico every summer.  While there he worked in his family’s butcher shop, rotisserie restaurant, and in the poultry business. After he finished his schooling and working various other jobs he started making chorizo at a kitchen in Culver City, at first selling it to local residents. After  eight months he had his first restaurant accounts, and he was on the path that led to opening a business called The Chori Man on a side street in San Pedro. There he offers sandwiches and tacos, but sells most of his product by the pound to restaurants and the public.

Humberto explained that there are many varieties of chorizo for an obvious reason; the many ecosystems within Mexico produce a variety of spices.

“People grow different spices and peppers around Mexico, and everybody uses their own chiles, whether it’s pasillas, guajillos, negros, whichever. They incorporate that into their sausages, and it means there are subtle differences wherever you go. I make a native Zacatecas red chorizo with Guajillo pepper, and I also make a Sonora style, a Toluca style, green chorizo with poblano and coriander, and also an Argentinean style.

“I’m practicing making new chorizos, and this is my test kitchen. We also want to incorporate smoked chorizos, maybe smoked hams… that’s something they only do in one little region of Mexico, around Toluca, and their smoking techniques are a little rough. It’s not a common thing, but when I experimented with smoking red chorizo, it came out phenomenally.”

It was natural to ask whether Mexican-Americans who have grown up here recognize Humberto’s sausages as part of their heritage. He was emphatic that they do.

“Most people here who grew up in the Mexican community may have grown up with the mass market chorizo but they know the real stuff when they get it. I had a guy in here yesterday who tasted it and said, “Dude, this is like the stuff my grandpa used to make.” I told him that it tasted that way because my grandpa taught me how to make it. The second generation, they go to Mexico and taste it there, or they have a family member who makes small batches of chorizo, so they know what good chorizo is. I want to give chorizo a better name in Los Angeles by making it the way we do in my family.”

Humberto noted that he has received some criticism.

“I just got a Yelp review from a woman who said, ‘This isn’t chorizo because it isn’t greasy enough.’ I’m afraid that in that case I don’t sell anything that is going to make her happy.”

*Before writing this article I contacted three commercial chorizo producers asking what part of Mexico was reflected in their recipe. Two acknowledged receiving my request, but none responded after over a month.