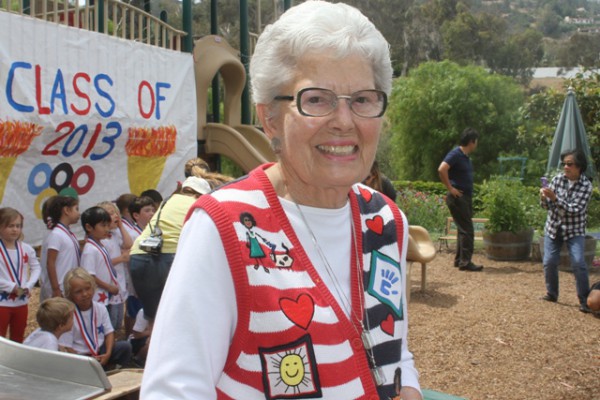 Romey Mumby was in attendance of The Olympics at Town & Country this month in which students perform jumps and other physical accomplishments. The school has put on The Olympics since 1983, the year before Los Angeles hosted the Summer Olympics. Photo by Ed Pilolla

Town & Country Nursery School was founded in 1958, the year Romey Mumby’s first child was born. Jeff was 7-months-old when he received a medication for a virus that caused his brain to swell, leaving him mentally challenged. Nursery schools rejected the boy when he was 3 and not speaking, but not Town & Country.

Mumby credits Town & Country’s extended socialization time for Jeff’s break-through with speech. He was grouped with other children his age, and by the time he left the school at age 6 he was speaking as well as anybody else.

Known as Miss Romey, the director since 1971 retired this month after 52 years. She originally became involved as a parent volunteer. After teaching at the nursery school, she became director when Mary Muchmore, who founded the school with Pat Horan, retired.

Mumby adopted their philosophy: Never do for a child what he can do for himself.

“They learn to solve their own problems, and not always to run to an adult to fix it for them,” Mumby said. “It’s a matter of learning through play and allowing children to be independent and develop at their own rate of speed.”

About half of the 105 youngsters ages 3-5 at Town & Country come from Palos Verdes and the other half arrive from the Beach Cities. Nestled amid the green hills, the school is located off Palos Verdes Drive next to St. Francis Episcopal Church. It holds a annual lottery for admissions, and parents patiently wait on a waiting list for a chance to enroll their child.

“They teach independence and conflict resolution,” said Elizabeth Peterson, who currently has a second child attending Town & Country. “The kids work it out on their own without parents or teachers or aides hovering over and telling them how to do it. It’s really important for life.”

Parent volunteers do not work in the same classroom as their child, and supervised children spend half the morning in the classroom and half outside on the grounds that include a playground. Yuri Chon, whose 5-year-old son attends the nursery school, said the surrounding hilly nature adds to the experience.

Chon said her son Isaac enjoys his time at Town & Country so much that he doesn’t want to be picked up early.

“He always wants to be the last one picked up. He wants to go home with Ms. Mumby,” Chon said.

Mumby plans to stay on as a volunteer and remain on the board of trustees.

Toni Graeber, who has worked as co-director with Mumby since 2003, will head the organization.

“I feel like I’ve learned from the best,” Graeber said. “She has been incredibly generous with her mentoring and modeling for me so I feel pretty comfortable launching into this position.”

Graeber is one of 50 employees at the school. Only three new employees were hired within the last year, and 17 employees have 21 to 30 years of experience at Town & Country, Graeber said.

“We are not a group that retires young,” Graeber said. “We are a family and incredibly loyal to the school and one another, and we love the fact that we continue to do this, as long as we’re basically breathing here. That’s a tribute to what it means to be part of this staff and this wonderful school. And a lot of that is a tribute to Ms. Mumby and just the way everyone believes in what we do.”

Observing kids for more than 50 years yields knowledge, and Mumby said that young children today are “not exactly the same” compared to 1961.

“For the most part I’d say they are the same,” Mumby said. “I think they have become more independent, and perhaps that’s because their parents are so busy. The child has more time to be on his own.”

Mumby said she does not see as many shy children today. She sees more children who are willing to try.

One thing about kids that hasn’t changed: “They always have to take a few minutes to get used to something before they are comfortable,” Mumby said.

Mumby grew up in South Gate, attended Occidental College in Los Angeles, and with her husband Wayne had three children. These days, she has four grandchildren, enjoys knitting and belongs to a book club. Wayne died in 2005.

Mumby’s oldest son, Jeff, who learned to speak at Town & Country, lives in Arizona on a special ranch. Mumby will always have a special place in her heart for challenged youngsters, and the staff has a sharp eye.

“For the most part, parents don’t know they have a special child that young unless it was as severe as mine, without any speech,” Mumby said. “After he’s with us for a few weeks, then we are getting clues that there is something here that needs some help, and we refer them to someone who can evaluate the child’s behavior… That’s one of the reasons we have such a good ratio of more adults [to children] because this child might need careful monitoring to make sure he stays with the group, that his behavior isn’t wild so that we can help him to stay and be appreciated.” PEN