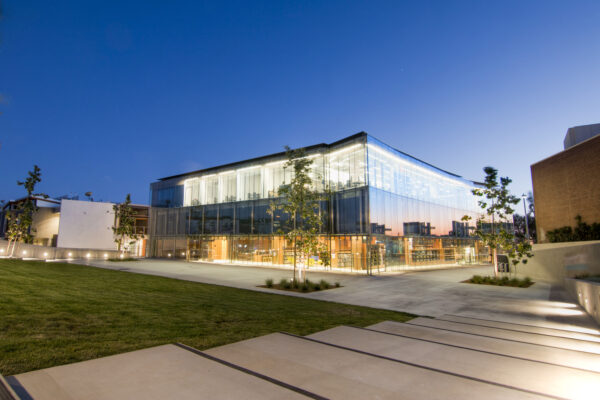 The new Manhattan Beach library, which will open on May 1. Photo by Brad Jacobson

When the new $26.3 million Manhattan Beach library is unveiled on May 1, it will be after almost two years of construction. But it’s actually been decades in the making.

The beginning of the newest branch of the Los Angeles County library system dates back to 1995, when the county shut down the Manhattan Heights Library on Manhattan Beach Boulevard because of financial struggles. (That building is now the Manhattan Beach Art Center.) The city’s other library, in the same location on Highland Avenue as the new library, remained open. The city continued to pay taxes as if it had two libraries, however.

“We were basically being a donor city to the rest of the LA County library system,” said Steve Napolitano, a senior deputy to Supervisor Don Knabe who was a Manhattan Beach city councilmember at the time. “We were paying more than we were getting in services.”

The city asked the supervisor’s office to set aside the excess funds, which Napolitano said added up to about a million dollars per year. It set up a library commission to evaluate if it should stay in the county library system or start its own like the city of Redondo Beach.

However, if the city left, it would lose all its money. So it lobbied state legislators to pass a law to let it keep its funds, which the legislators did.

More pressing, however, was the need to build a public safety building to house the police and fire departments, according to Napolitano. They were operating out of temporary buildings and trailers after their outdated buildings from the 1950s were torn down.

Then there was Metlox Plaza, which the city had acquired, and improvements to the Strand.

Those projects were being completed as Napolitano and his colleagues termed out of office in March 2005.

“We left it to the new council to build the new library,” said Napolitano.

The city council decided it would be more beneficial to remain in the county system, where it could take advantage of the county’s resources without having to pay the ongoing costs, and since it could keep the money it had paid the county over the years. It started considering whether it wanted to renovate its one-story building from 1975 or build a new one entirely. 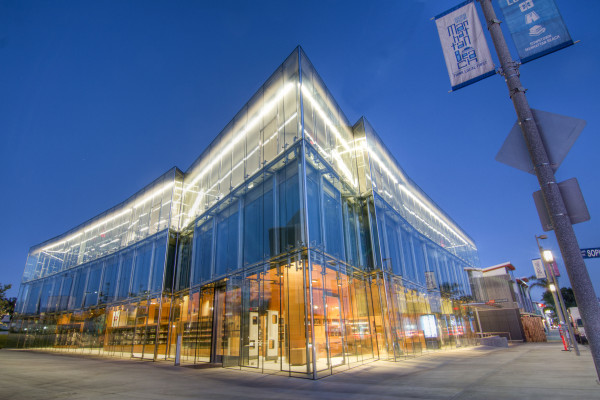 After the closure of the Manhattan Heights library, the library on Highland Avenue became more crowded, according to Napolitano and City Councilmember David Lesser, who is also on the County Library Commission. The fact that it mostly consisted of one large room made it difficult for different groups to use it at the same time.

“Out of 80 libraries, it had the most popular story time hour,” said Lesser. “Sometimes it was hard with the commotion of kids like mine to have quiet space for reading.”

Because the building was so dated, it would cost only a nominal amount more to build a new building from scratch, said Mayor Wayne Powell, who served on multiple committees related to the project.

“They looked at remodeling the former library, but it would have been structurally unsound to add a second story,” said Powell. “It needed seismic retrofitting. It made more economic sense to demolish it and start over.”

The county selected the Culver City architecture firm Johnson Favaro, which received local recognition for its design of the West Hollywood library.

The firm surveyed the town, looking for a prevailing architectural style to match, but found none.

“Nothing blends in anywhere in the city,” said Powell. “They said we should start with a blank canvas because in any event, city hall needs to be remodeled or redone.”

Johnson Favaro came up with the design of an all-glass, rectangular building.

The downstairs of the new library is devoted to children’s use, while the upstairs, which has a fireplace and panoramic views of the Pacific Ocean from Palos Verdes to Malibu, is for adults.

“It’s going to be a real fight to see who gets the seats in front of the window,” said Powell, who viewed the space while it was still under construction.

The 21,500 square feet will almost double the area of the old library.

Powell, Lesser and Napolitano refuted criticism that it doesn’t make sense to spend so much money on a library in this day and age.

“Libraries are being used more than ever,” said Napolitano. “They’ve evolved into community centers. It’s a place to meet, read, research and share information.”

To that end, the new library has a 100-seat community room and an outdoor area bordering the civic center plaza with speakers and electricity that can be used for events.

The city and county each put forward money for art to decorate the interior. Those works by artist Kathy Taslitz will most likely be unveiled at the end of the summer, Powell said.

There were a number of concerns that had to be addressed along the way, Powell said, such as what would happen when seagulls and other birds defecated on the glass.

“I thought they were going to put in an electronic squeegee system,” said Powell. “But then Supervisor Knabe said, ‘If that’s the worst problem, it’s not so bad.’”

True to Manhattan Beach’s reputation for being environmentally friendly, the building was designed to meet LEED gold-certification. All the wood inside, including a decorative ceiling, was repurposed, according to Powell.

The library will also have the county’s first automatic book sorter. Patrons will be able to watch on a screen as their books are processed.

On Friday, local officials will gather for the ribbon-cutting ceremony. Lesser said the library would become a new “focal point” for the city.

“It sends a message about the community’s great value of learning and education,” said Lesser. “It’s not just about the pier and views, and the library reflects that.” ER