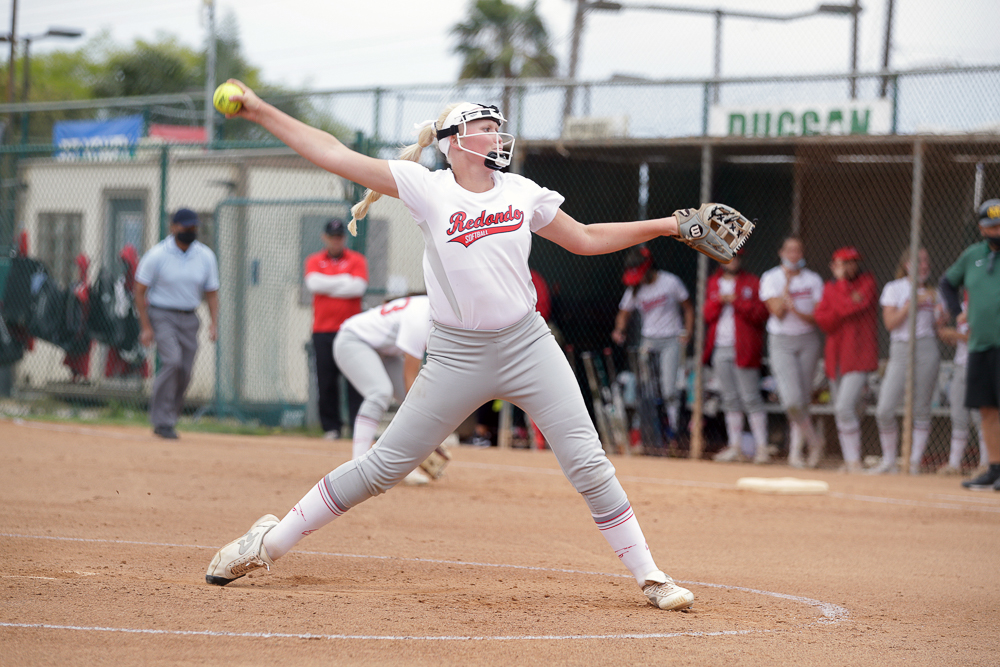 On the mound and at bat, Redondo’s Carly Koltko helped her team go 6-0 to win the Bay League title. On Saturday, Kolto drove in two runs in the first innings, leading the Sea Hawks to a 12-6, first round victory over Quartz Hill in the CIF Southern Section Division 3 playoffs. On Tuesday, the Sea Hawks advanced to the semi finals by defeating Don Lugo 7-5. Redondo is scheduled to play Beckman, in Irvine, on Thursday. If they win that game they will play for the championship over the weekend. Photo by Ray Vidal

When you strip away all the hot air rhetoric about “building the right culture,” and “getting high-character guys,” and “looking for players who play for each other,” there’s really only two ways to build an NBA championship contender.

The first is to tank for several seasons in a row, to lose as many games as possible in consecutive seasons so you get several high draft picks. Then you have to hope that all that young talent matures at the same time and develops a winning chemistry.

Call that approach Plan A. It’s the most common approach, but some team owners and fans don’t have enough patience to wait for their team to blossom into a winner. And even then you have to get a little lucky because there’s 29 other teams just as desperate to put together a title contender. And of course not all 19-year-olds mature into stars, no matter how promising they look.

The other tried and true method is to mortgage your future in the form of young players and draft picks to trade for several veteran stars – preferably superstars – at the same time and hope that they can quickly learn to play together and share the ball in time to win a championship before they get too old.

The 2008 Boston Celtics are the prototype. They traded for Kevin Garnett and Ray Allen to team up with their own Paul Pierce and they won a title in their first year together.

This year’s version is the Brooklyn Nets, who have acquired Kevin Durant, Kyrie Irving and James Harden for a Big Three of their own. Manhattan Beach’s own Steve Nash is the lucky first-year coach who has to win a title in his first try or be called a failure.

Call that approach Plan B.

The Lakers tried Plan A as the late, great Kobe Bryant was limping to the end of his career, losing so many games that they were able to draft top-rated prospects like Julius Randle from Kentucky, Brandon Ingram from Duke and Lonzo Ball from UCLA in three consecutive years.

But when LeBron James let it be known he was leaving Cleveland a second time after he had once before ditched the Cavaliers for the Miami Heat, the Lakers decided to chuck Plan A and go with Plan B.

Within a span of 12 months they let Randle walk as a free agent and then traded Ingram and Ball along with Josh Hart — another promising youngster — and a boatload of draft picks to New Orleans for Anthony Davis.

Now that LeBron had a genuine star as his wingman, everything went according to plan and the Lakers went from zeros to heroes in 12 short months as they won the 2020 NBA title in the Florida bubble. Trouble was, no one outside of LA seemed to give a damn about the championship because the nation was mired in pandemic panic.

That 2020 title now feels devalued.  Only Lakers owner Jeannie Buss keeps talking about how proud she is to have revived the Lakers fortunes after a 10-year playoff drought.

But now, after watching an injured-but-game LeBron limp through the Lakers first-round loss to the Phoenix Suns this week while Davis collected so many injuries, he couldn’t stay on the court for more than two games at a time, it’s clear that the LeBron-AD superstar pairing is a one-and-done combo platter.

LeBron will be a 37-year-old diminished superstar at the tail end of his career next season.  And AD is unlikely to ever play a full season again – much less play a full season extended by the kind of two-month playoff run necessary to win an NBA title – unless he drastically revamps his brittle body and his passive mental approach.

That’s why the only thing the Lakers won this year was a new nickname for AD. The great Charles Barkley – as glib on TV now as he was unstoppable on the court long ago — dubbed him “Street Clothes” because he was so sick of watching AD lounge around on the bench in fancy threads while his teammates were on the court busting their butts to get a win.

The new nickname instantly stuck because it had the ring of truth.

Meanwhile, although no one around the Lakers likes to talk about this, Randle was so good with the New York Knicks this year that he made the All-Star team and is actually in the conversation for NBA Most Valuable Player, although he won’t win it.

Ingram made the All-Star team for a second time and has found the perfect teammate for himself in Zion Williamson, already one of the 5 most unstoppable players in the entire league.

Even Ball, who endured so much criticism after he didn’t live up to Magic Johnson’s prediction that he would be the next Magic and take over LA, improved his shaky shooting so much this year that he is now a highly valued free agent who will sign a big contract with someone this summer.

So much for the Lakers Plan A and Plan B. Now their future is all used up, and there is no realistic way to re-load before the end of this decade. They’ve traded away all their first-round draft picks, most to New Orleans, through the 2027 season.

Lakers fans won’t hear this kind of brutal truth from the mainstream media because most of them are too close to the team, too dependent on the team’s PR staff for access to the players, and too worried about being called haters on social media.

But it’s the truth, and if these Lakers ever win another title with LeBron and AD All Ball will happily admit we were all wrong.

At the same time the Lakers were going after LeBron and AD, the Clippers tried their own version of Plan B by trading all their best young players and five first round draft picks to Oklahoma City for Paul George, an All-Star but not a superstar.

They really had no choice because Kawhi Leonard, who had just led Toronto to the 2019 NBA title, said he would sign with the Clippers – but only if they first acquired George, who had recently given himself the nickname “Playoff P” despite a history of playoff failure in Indiana and OKC.

That star pairing bombed out last year in a second-round playoff series against Denver when George choked so badly that players around the league started calling him “Boy George.” And if you think that’s a compliment in the macho NBA, think again.

After the Clippers prevailed over the great Luka Doncic and the Dallas Mavericks this week in one of the strangest first round series in NBA history – indeed, the only one ever in which the road team won the first six games – the Clips have a new challenge.

Kawhi and PG – sorry, Playoff P — have a second chance to prove they are not epic chokers and carriers of the Clippers Curse that dogged the franchise even back in the day when it was located in Buffalo, New York and later in San Diego before coming to LA in 1984.

Multi-billionaire owner Steve Ballmer – who bought the team from racist cheapskate Donald Sterling — has invested a ton of money in his team. He sits on the sideline frantically rooting for his team like a guy who just downed a six-pack of Red Bull.

And he deserves a winner after making the difficult decision to sack Coach Doc Rivers, whose voice had worn thin with the players, and to hire Ty Lue, a former player who commands the locker room despite his 6-foot stature.

He is a true player whisperer and made all the right moves and proper adjustments after his team lost the first two games at Staples Center.

But the Clips don’t win that game without Terrance Mann and Luke Kennard.

They’re the little-known, unsung bench players who proved the difference in the Clippers victory. They both came off the bench to provide scoring support exactly when Kawhi and Playoff P most urgently needed it.  Mann hit 5 of 10 shots for 13 points with 5 rebounds and 1 assist in 26 minutes, while Kennard hit 4 of 6 shots for 11 points in 14 minutes.

That either of them got that kind of playing time was a shock to Clippers fans. But it’s exactly the kind of supporting-cast contribution Kawhi and PG will need as they advance to play the top-seeded Utah Jazz, who finished with the best record in the league.

The Clip Show has replaced the Lake Show – for now and likely for a long time to come. 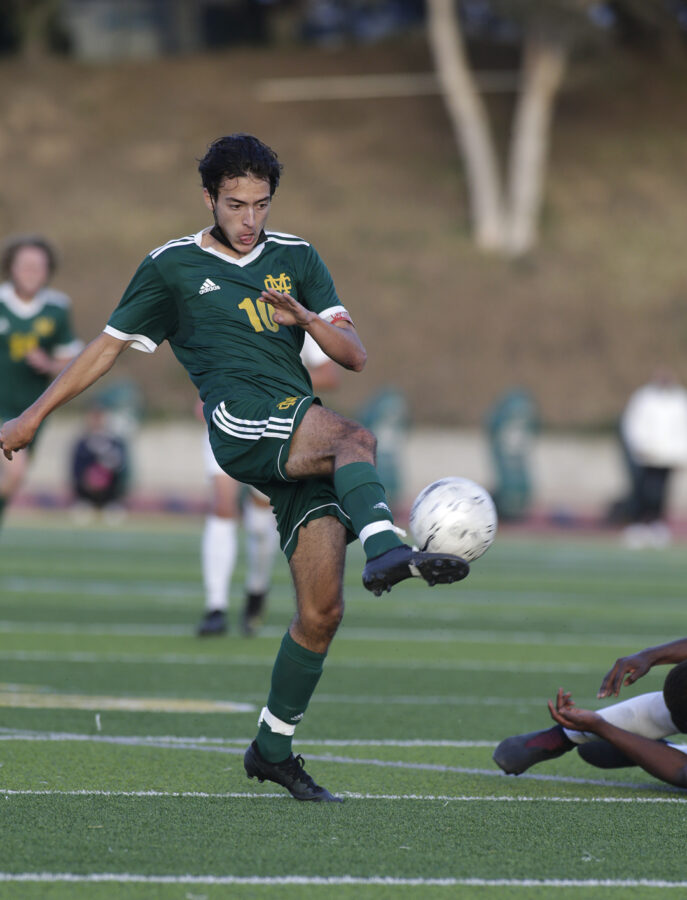 And for the Mira Costa boys soccer team, it was indeed golden as it made the Mustangs officially the best team in Southern California.

Once again, the Mustangs had to knock off an undefeated team to attain their latest honor.

Three weeks after winning the Bay League, two weeks after beating undefeated and nationally top-ranked Cathedral in a CIF quarterfinal match, and one week after narrowly edging out archrival Loyola by a score of 1-0 to win CIF, the Mustangs beat top-seed and previously undefeated Lake Balboa Birmingham 4-3 in overtime Saturday afternoon to win the Southern California Division 1 Regional Championship.

Just like they did with Cathedral, they traveled into the Lions den, to Birmingham High and took what they wanted home with them.

But this time it came a lot harder and took a lot longer. And this time they had to come back from a one-goal deficit, three separate times just to tie the game each time.

Finally, in overtime, senior Tanner Mendelsohn gave the Mustangs the upset win when he took a low shot to the bottom right-hand corner of the goal in the 91st minute of overtime. That was the so-called golden goal.

But just getting to overtime took a spectacular effort combined with endless resilience.

Birmingham, which finished 18-1 on the pandemic-shortened season, took a 1-0 lead into halftime. The Mustangs tied it at 1-1, but Birmingham scored again to go up 2-1. Mira Costa tied it again at 2-2, but again Birmingham went ahead 3-2.

Elias Kraus tied it at 3-3 for the Mustangs, setting up the long, overtime, which finally ended with Mendelsohn’s golden goal.

The Mustangs finished 18-1 on the season, with three ties.

After the epic victory, team leader Thomas Southey summed up the crazy game and at the same time the crazy, beyond-all-expectations season: “They were the number one team in California, so I guess we are now.”