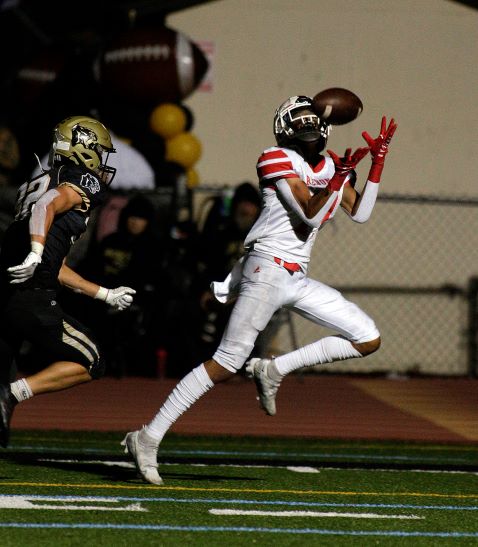 Wide receiver Bobby Shaw covered 33 yards on this play midway through the third quarter to tie the game. He caught six passes for 105 yards and two touchdowns. Photos by Ray Vidal

It took fourth quarter heroics in both games, but in the end both the Mira Costa and Redondo football teams opened the Bay League season with a victory Friday night.

The Sea Hawks’ 28-21 win at Peninsula maintained their unbeaten record at 6-0, as Redondo continued its astonishing climb from the doghouse to the penthouse in the space of less than a single year.

Last season Redondo went 2-8, finished at the bottom of the Bay League standings, and was pounded in almost every game they played. It got so bad that Coach Matt Ballard, who had a long record of success before stumbling in his final few seasons, resigned right after the season.

That paved the way for former Sea Hawk star and NFL linebacker Keith Ellison to take over as Head Coach. While hopes were high that he could revive the once-elite program over the next few seasons, no one expected this kind of overnight turnaround.

Indeed, the Sea Hawks had been so good this season that they led most of their games from the opening kickoff to the last play. But that wire-to-wire dominance was missing in the win over Peninsula.

The Sea Hawks fell behind by a score of 14-7 at halftime and their unbeaten status was facing a severe challenge – until their defense stepped up and saved the day with two huge fourth-quarter defensive plays just 78 seconds apart.

In the first minute of the fourth quarter, defensive back Zane Hull returned an interception 21 yards for a touchdown. Then, just four plays later, Max Horowitz picked up a fumble and sprinted 32 yards for another score and a 28-21 lead that stood up despite a last-second push by Peninsula.

But Shaw got behind the Peninsula secondary for his second score, covering 33 yards, midway through the third quarter to tie the game, and then Redondo’s defense made its two big plays.

First Hull stepped in front of a receiver, picked off the football cleanly, and raced down the left sideline to give the Sea Hawks the lead. Just over a minute later Horowitz picked up a Gonzalez fumble and ran down the same sideline for another defensive touchdown.

Peninsula pulled within 28-21with four and a half minutes to go, and had one more chance to tie or go ahead when they got the ball back two minutes later. But the game ended with Peninsula unable to complete a pass into the endzone.

With Mira Costa nursing a 14-12 lead in the fourth quarter and Culver City pinned inside its own 10-yard line, Culligan saw a slant play developing and made his move towards the pass.

Culligan came up with the interception and had a wide-open path to the end zone, giving Mira Costa a 21-12 lead with 5:13 left in the game.

Senior running back Matt Kraskouskas was the key offensive player for the Mustangs, just as he has been ever since he emerged as a star early last season when Costa was trying to recover from a terrible start.

Kraskouskas rushed for 115 yards on 27 carries, including a 1-yard scoring run at the 9:03 mark in the third quarter that gave Mira Costa a 14-12 lead.

Then Culligan and the defense pitched a second-half shutout. Of course, Culver City (2-4, 0-1) helped the Costa cause with three second-half turnovers. 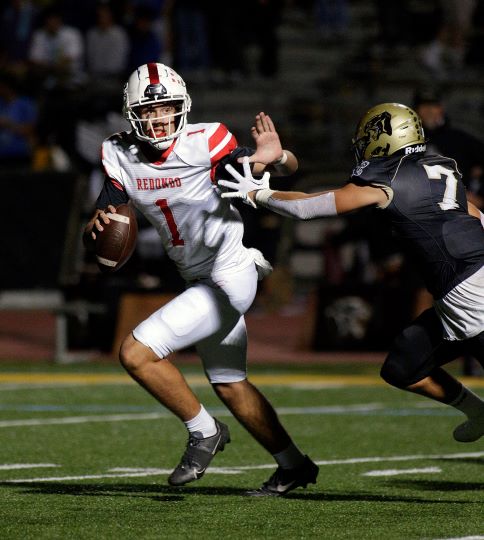 Christian Hunt connected on 14 of 23 passes for 182 yards and two touchdowns in the Sea Hawks 28-21 win at Peninsula last Friday.

Crotty leaped high for a pin-point pass from De La Cruz and came down with a 41-yard touchdown catch for a 7-6 lead with 7:06 left in the second quarter.

Crotty also made a memorable catch on a low ball that was just a few inches off the ground on a key third-down situation in the third quarter that set up Kraskouskas’ 1-yard scoring run.

Mira Costa hasn’t won a Bay League since 2016 but now has the title firmly in its sights, with two main obstacles still in its way: perennial league power Palos Verdes, and of course unbeaten Redondo. They take on PV at PV next week, and will travel to Redondo for the annual backyard brawl in the regular season finale.

If all continues to go well for the local Beach City teams, that final game could decide the Bay League title.

Rams, Chargers: Stuck in the Middle With You

In the NFL, the key word has always been parity, meaning on any given Sunday any team can beat any other team.

While that cliché is occasionally true, the reality is that parity in the NFL means there are a few very good teams, a few very bad teams and a whole bunch of mediocre teams bunched together in the middle of the pack.

This year, so far, the Chargers (2-2) after Sunday’s 34-24 win over the winless Houston Texans, and the Rams (2-2) after Monday night’s 24-9 destruction at the hands of the San Francisco 49ers, are stuck firmly in the middle.

After a quarter of the season has been played, the big picture is becoming clearer and clearer: the Chargers are totally reliant on superstar quarterback Justin Herbert having a great game to have any chance to win, and the Rams will struggle as long as aging quarterback Matthew Stafford continues to regress from his championship form of last season.

Stafford was awful Monday night, getting sacked seven times, failing to produce a touchdown on three different trips into the red zone, and throwing a game-ending interception when they were marching downfield with a final chance to tie the game.

Of course, it’s not all Stafford’s fault. The offensive line has been decimated by injuries, and without Odell Beckham Jr. Cooper Kupp is the only weapon the Rams have left.

And when the other teams know you’re going to Kupp on almost every play, it becomes easy to shut down the Rams. Miracle worker Coach Sean McVay and General Manager Les Snead need to do something quick to get Stafford some more weapons to work with.

If they don’t do that, the season could be effectively over much sooner than anyone could have imagined for the Super Bowl champs.

It only took him five years to reach that milestone.

And UCLA quarterback Dorian Thompson-Robinson finally played a complete game where his elite talent carried the Bruins to a big-time victory.

It took him five years to reach that milestone, too.

Back when Kelly was hired in 2017, Thompson-Robinson was Kelly’s first and biggest recruiting triumph, a superstar run-and-pass quarterback coming out of a Las Vegas high school that played a national schedule.

After five years of Bruin mediocrity, he is still Kelly’s highest-rated recruit.

Over those five years they have had a couple of wins over big-name programs, but mostly it has been a case of watching Thompson-Robinson’s sensational athleticism and running ability try to off-set his sub-par passing skills — and too often failing to do so.

That was the reality behind UCLA’s impressive destruction of previously undefeated Washington, ranked 17thh in the country, on Friday night in front of a frenzied crowd at the Rose Bowl.

The win pushed UCLA’s record to 5-0 and earned them a national ranking of 18th when the new poll came out Monday morning. But three of those wins were against no-hope creampuffs Bowling Green, Alabama State and South Alabama – which turned into a white-knuckle 32-31 thriller, won on a last-play field goal — and the fourth was over under-manned Colorado, the worst team in the PAC-12 at 0-5.

Oh, and DTR, as he will forever be known in UCLA lore, is re-writing all the Bruins record books. Of course, he’s rewriting the record books because he’s in his fifth year as a starter, whereas previous Westwood stars like Gary Beban and Cade McCown had to do it in four years.

You could say he’s one of the few people who benefitted from the pandemic, which forced NCAA administrators to grant a fifth year of college eligibility to anyone who played during the Covid-19 season of 2020-21.

Against Washington, DTR threw for three touchdowns, ran for another, and had at least two highlight reel plays – a leap over a lunging tackler, and a spin move that left two Washington defenders crashing into each other – that deserve to make a top 10 end of the season montage.

The Bruins looked great for one night, like a team worthy of being ranked in the the top 10.

But after five years of boom and bust with both DTR and Kelly, of hopes raised and hopes dashed, it’s eminently fair to ask: was this yet another illusion? Or was it the beginning of a fairytale PAC-12 season for the Bruins that ends with a victory over USC in the annual rivalry end-of-the-season game followed by a trip to the Rose Bowl on January 1?

The answer most likely will come next Saturday when they take on 12thh ranked Utah, which won the PAC-12 last season, and has won four straight games since a season-opening road loss to Florida.

The Utes have won five consecutive games over UCLA, so a Bruins win Saturday in Pasadena will set the home crowd on fire, get the Bruins a national ranking, and maybe, finally, earn Kelly some credibility with a Bruins fan base that has been agitating for his firing for the last three years.

Most of all, it will make UCLA football relevant in a town where USC and new coach Lincoln Riley and new star quarterback Caleb Williams and new star receiver Jordan Addison have shone so brightly that they’ve commanded almost all the media’s attention.

After their 42-25 victory over Arizona State Friday night, the Trojans are now ranked sixth in the country with a 5-0 record. And Williams looks like a slightly bigger version of star NFL quarterback Russel Wilson, a guy who can beat you with his arm or his legs.

Is there room for two LA teams in the national top ten?

There will be if UCLA can beat Utah on Saturday at the Rose Bowl.

To quote a disgraced, twice-impeached former president who shall go nameless in this column: Be there, will be wild.