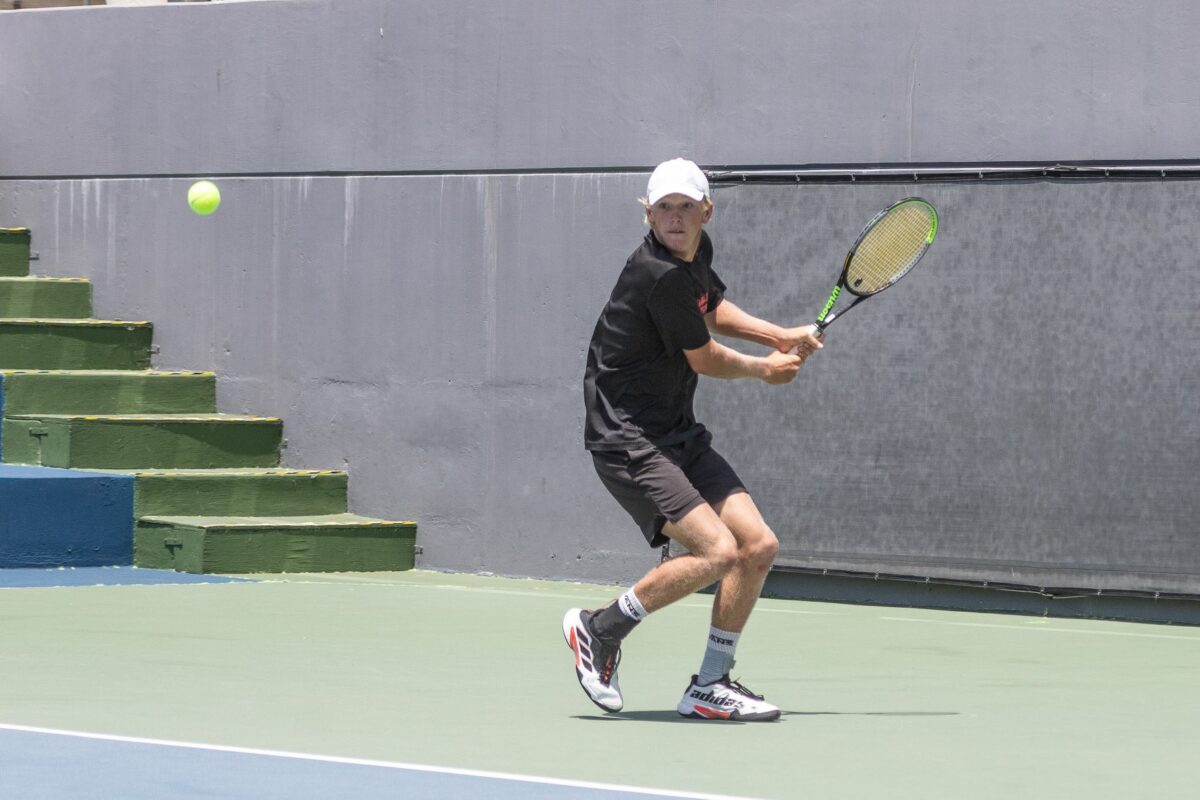 Mira Costa tennis star Kelly Giese bombed a serve deep to the backhand corner, smacked the short return deep to the forehand corner, and was all set to knock off a sharply angled forehand volley into the open court when he noticed at the very last second that a stray ball was just starting to roll onto the far side of the court.

Karl Collins, his opponent in the quarterfinals of the Manhattan Beach Open, later confessed that he didn’t even see the stray ball, and that it didn’t affect the point – and that he probably would have lost the point if they had played on. 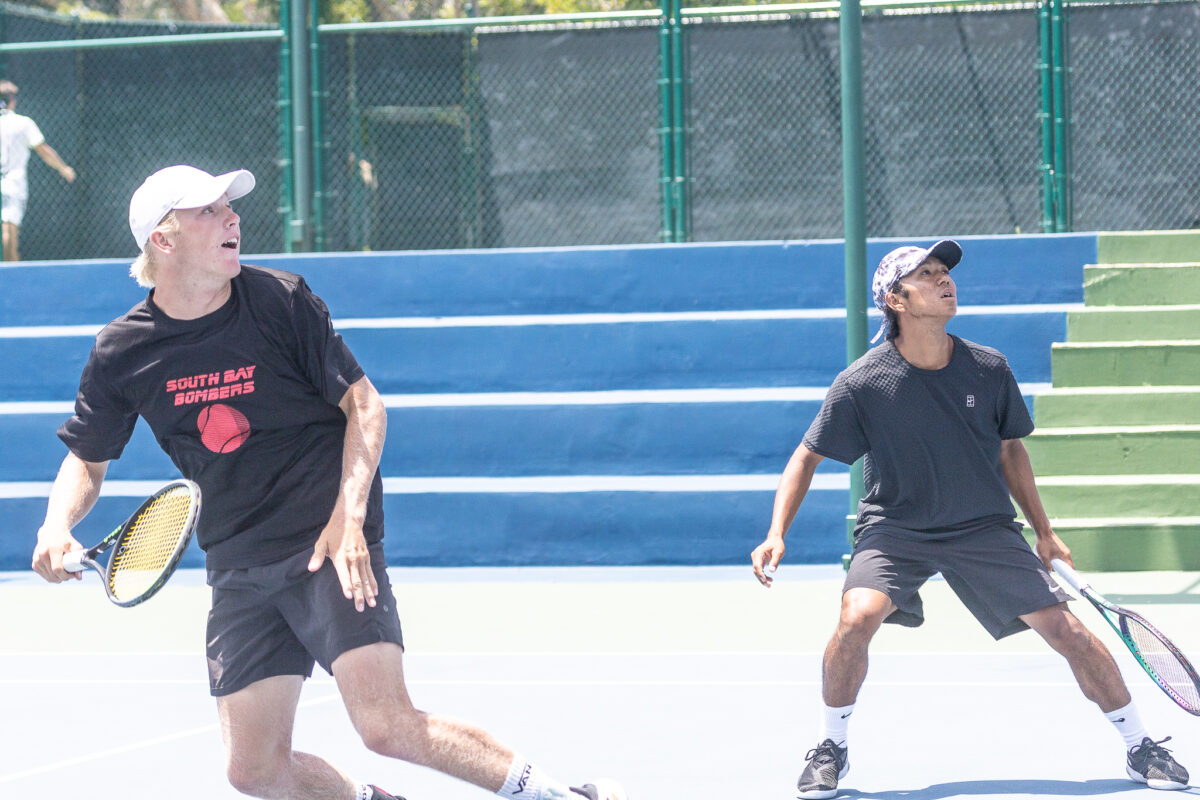 Kelly Giese and partner Nathan Caoile react to a high lob during the Doubles Final.

Giese, however, did something that not all players in his position, deep into a third-set tiebreaker, and desperately fighting for every point, would have done if they were about to win the point.

“Ball on, ball on,” Giese called out, stopping play and costing himself a key point that would have given him a 4-3 lead in the super tie-breaker, which goes to the first player to reach 10 points.

On the sidelines his coach, Allan Yap, was not surprised. “He’s a great sportsman,” Yap said. “Always has been. That’s just the kind of kid he is. His whole family is like that.”

Giese, and Collins replayed the point, and the momentum turned. Collins won the next seven points to win the match 6-2, 2-6, 10-3. 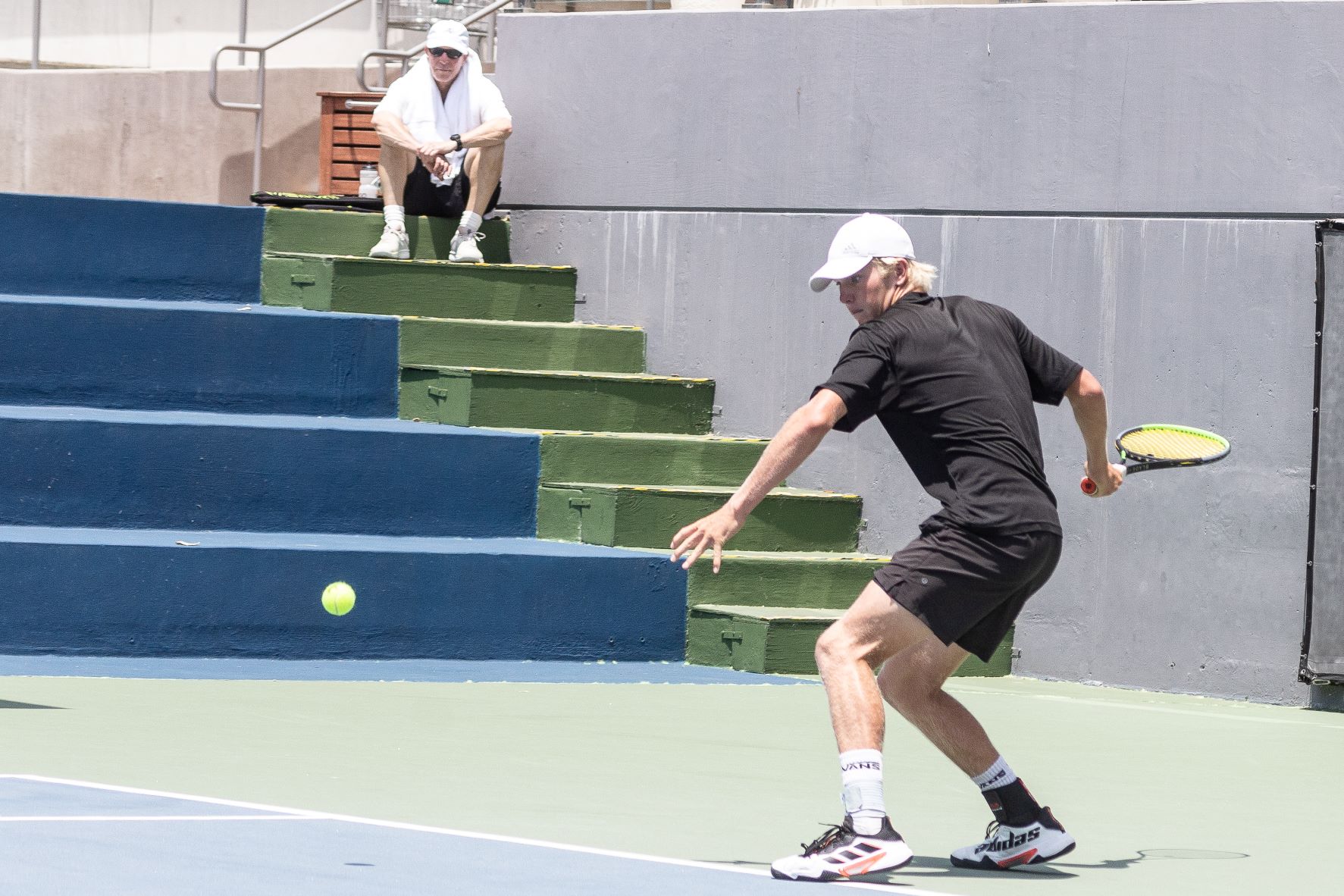 Kelly Giese winds up to smack a topspin forehand, his best shot, during the Doubles Final.

Giese had just missed pulling off a huge upset over the player who eventually was the runner-up in the tournament, but his family, and friends gathered at Live Oak Park to cheer for him seemed more disappointed than he was.

“Hey, I gave it everything I had,” he said. “No worries. At least we’re still alive in the doubles.”

Indeed, he and his doubles partner, Nathan Caoile, went on to win the Open Division Doubles Sunday afternoon at the Manhattan Beach Country club with a white-knuckle win over the Lam Brothers.

The doubles match was eerily reminiscent of his Saturday singles quarterfinal, with one significant difference – this time he and his partner won the super tie-breaker. Under the tournament’s rules, if teams split the first two sets they would play a super tie-breaker to determine the winner rather than play a complete third set. To further streamline play, the tournament used no-ad scoring in doubles – meaning if the score reached 40-40 in a game they would play one point for the game rather than keep playing until one team won the game by two points.

Giese, and Caoile cruised to a first set 6-1 win behind the power play of Giese – rocking a big kick-serve and an even bigger forehand – and the finesse touch of Caoile, a lefty with one of the sweetest, most fluid, and flowing one-handed backhands you’ll ever see, amateur or pro.

After the match, Yap could barely contain his pride in seeing his star pupil continue his upward march. “In the last nine months he’s progressed from good to great,” Yap said. “It’s a wonderful thing to see. No one works harder than him, so he deserves all his success.”

When Giese added his name to that list, it took an epic effort: as an unseeded player, he came out of nowhere to beat four seeded players on his way to the final.

“The kid is a late bloomer,” Yap said. “He became the first player from Mira Costa to reach the Ojai Final since Jeff Tarango did it all the way back in 1985.”

Tarango, a genuine Live Oak legend, made an appearance at Live Oak Saturday afternoon to watch the high-level tennis being played as everyone from the lowest divisions – like 3.5 and 4.0 – up to the Open Division battled to make it to Sunday, when the semi-finals and finals were played at the Manhattan Beach Country Club. 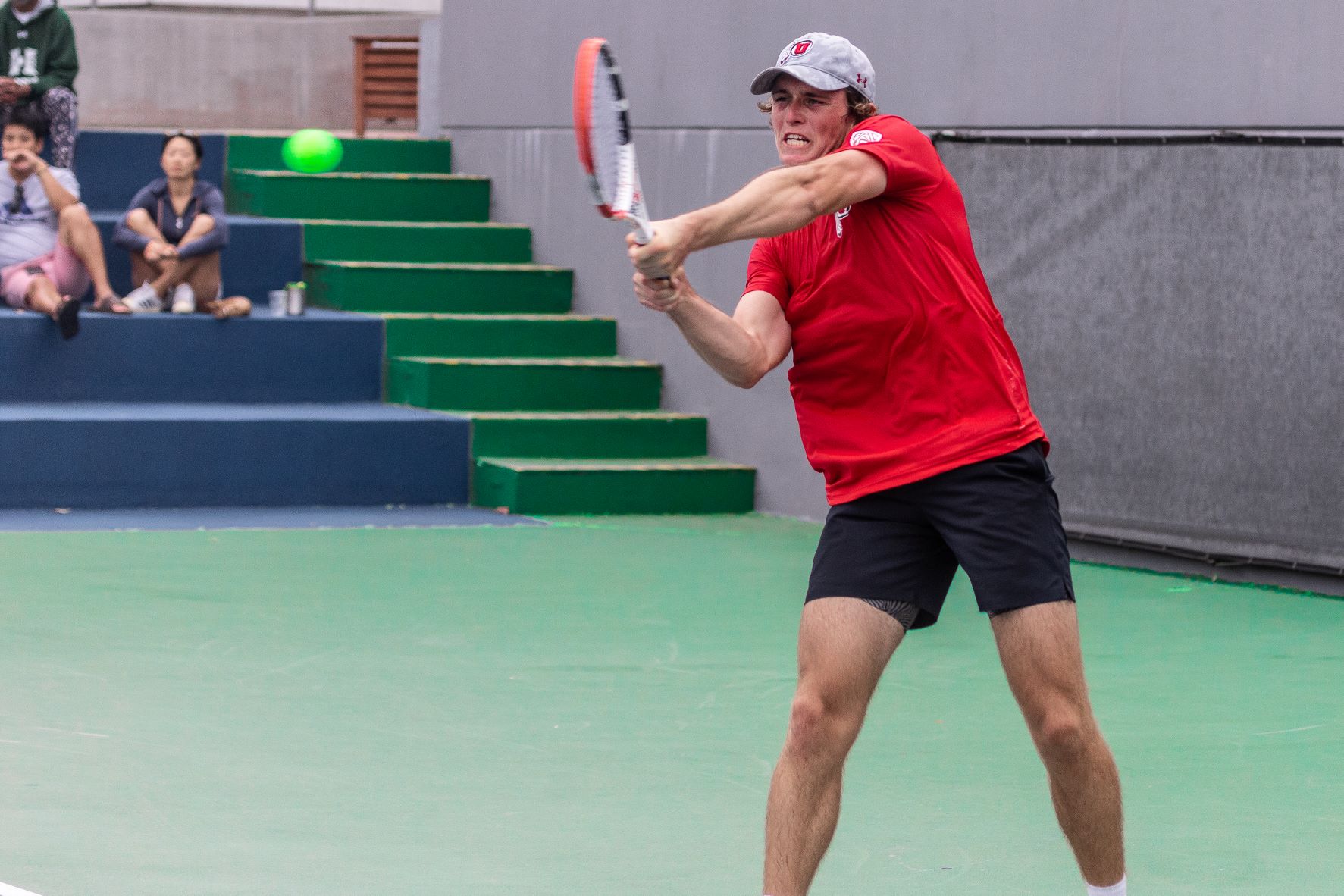 The Sunday switch of tournament locations is a long-standing tradition that gives the MB Open a little extra juice at just the moment when most tennis tournaments are winding down to a small band of finalists, and their families huddled on the sidelines, cheering them on.

Instead, the plush, top-end country club was crawling with tennis fans, and club members alike, all of whom got to see great tennis all day long played on the club’s sunken-bowl stadium court, with perfect sight lines from every angle. On the south end, club members, and guests ate, and drank on the expansive upper patio as the players fought their battles below them. On the south end, friends and family lined the benches set up for optimal viewing.

Giese’s father, Doug, said he first put a racket in his son’s hand when he was 18 months old.

“He just took to it naturally,” Doug Geise said. “That racquet was bigger than he was, but he was so competitive he made it work.”

His older sister, Madi, was a tennis star in her own right at Mira Costa five years ago, and now coaches young players. She said watching her little brother’s progress from pee-wee pusher to grown-man power player was a study in perseverance.

“He has two older sisters, so we beat up on him a lot early on. He had to develop a thick skin. I could always beat him until he was about 15,” she said. “But then he started beating me. I knew eventually he was going to be better than me, but still….”

By his own admission, Giese never imagined that his tennis game would reach the level it has in the last year. Typically, stars-to-be are identified before they even hit 9th grade, but Giese took a different path.

“As a freshman at Costa I played second doubles, and as a sophomore I played second singles.” he said. “Then junior year I played first singles, and then again in my senior year.”

His Ojai run to the Finals ignited something deep in his athletic soul, and showed him he was capable of much more than he had ever realized.

“He’s a great athlete, and a guy who competes on every point, tries for every ball. That’s pretty rare for a tennis player,” Yap said. “That combination of athleticism, work ethic and advanced skill set is going to carry him a long way. He’s capable of playing on the pro tour if he keeps working as hard as he is now.”

Giese is scheduled to attend Lubbock Christian University in Lubbock, Texas this fall. He is the prize recruit of a brand-new tennis program there, and Yap said the team’s coach was thrilled to get his commitment.

“It’s a great opportunity for Kelly to shine right away,” Yap said. “I think he’ll be their best player from day one.”

His performance in the Doubles Final showed just how dominant his game can be. When his team got to the super tiebreaker after losing the second set, Giese took the lead offensive role while Caoile played steady and smart, setting up shots that let Giese shine.

With the crowd cheering for both teams but the MB kids holding a clear edge in crowd support, Giese and Caoile jumped out to a quick 4-0 lead.

Giese won the first point with an overhead slam that bounced into the spectator stands. Then he drilled consecutive forehand winners from the baseline, and finally Caoile jumped in front of a cross-court shot for a stunning stab-volley that caught the Lam brothers by surprise.

The two teams battled to 6-2, until Giese ended a long rally by scraping a sharply angled volley winner off his shoe tops for a 7-2 lead that basically decided the match. From there he got a bit lucky when he shanked a serve return that fell in for a winner and the taller Lam brother slammed a ball way out in pent-up frustration to make it 9-2. Giese put an end to the match when he drilled a service winner and both he and his partner leaped in the air to exchange high-fives and yelled in unison “Let’s go!”

Then he walked to their bench, took off his sizzling sneakers, and put on his signature fish-flops, a pair of rubber sandals shaped like sea bass heads with a wide-open mouth for the toes to stick out where the fish’s teeth would normally be. 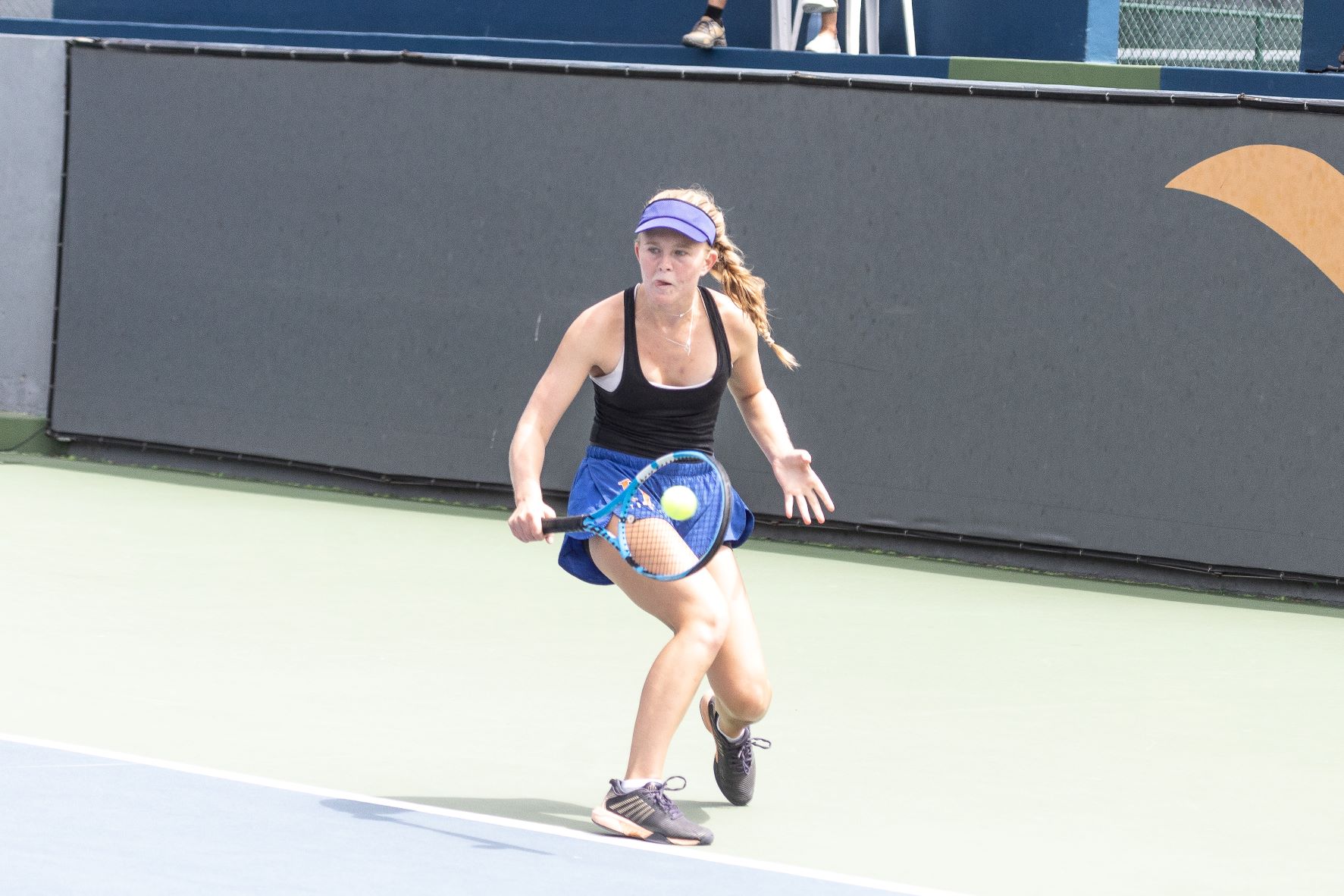 Women’s Open Division Winner Marissa Markey gets down for a backhand volley during the Finals.

“I’m going to get me a pair of those fish flops too,” his sister Madi said. “They’re pretty cool.”

Mike Hayes, a 12-year resident of Manhattan Beach, won the 4.5 Men’s Division with a dramatic ending. On the next to last point his opponent hit what looked like a winner that was going to be out of reach for his backhand. Out of desperation, he quickly switched his racquet to his left hand and managed to hit a lefty forehand for a winner.

“I’ve done that once in a while before today,” he said. “But never in that kind of situation.”

Beth Rager of Manhattan Beach and Becky Anzivino of Redondo Beach won the Women’s 4.0 Division with an amazing comeback. After winning the first set 6-1, they fell behind 5-3 in the second set, and looked to be headed for a super tie-breaker. “We told each other to just dig deep, because we didn’t want to go to a third set,” Anzivino said. “I’m best at the net, so I stayed up there as much as I could while Beth ruled from the baseline.”

Sure enough, they pulled even at 6-6 and forced a second set tie-breaker, which they won to secure the match after winning the 3.5 Division last year. But rather than take the safe route and go for a repeat in the 4.0 Division next year, they vowed to move up a class and compete in the 4.5 Division.

“We want to keep challenging ourselves,” she said. “And give some other team a chance to win the 4.0.”

In the Open Women’s Singles Final Marissa Markey of Torrance outlasted Jovana Romero in a battle of baseline bashers, while Bruno Krenn beat Karl Collins in the Men’s Open Final. 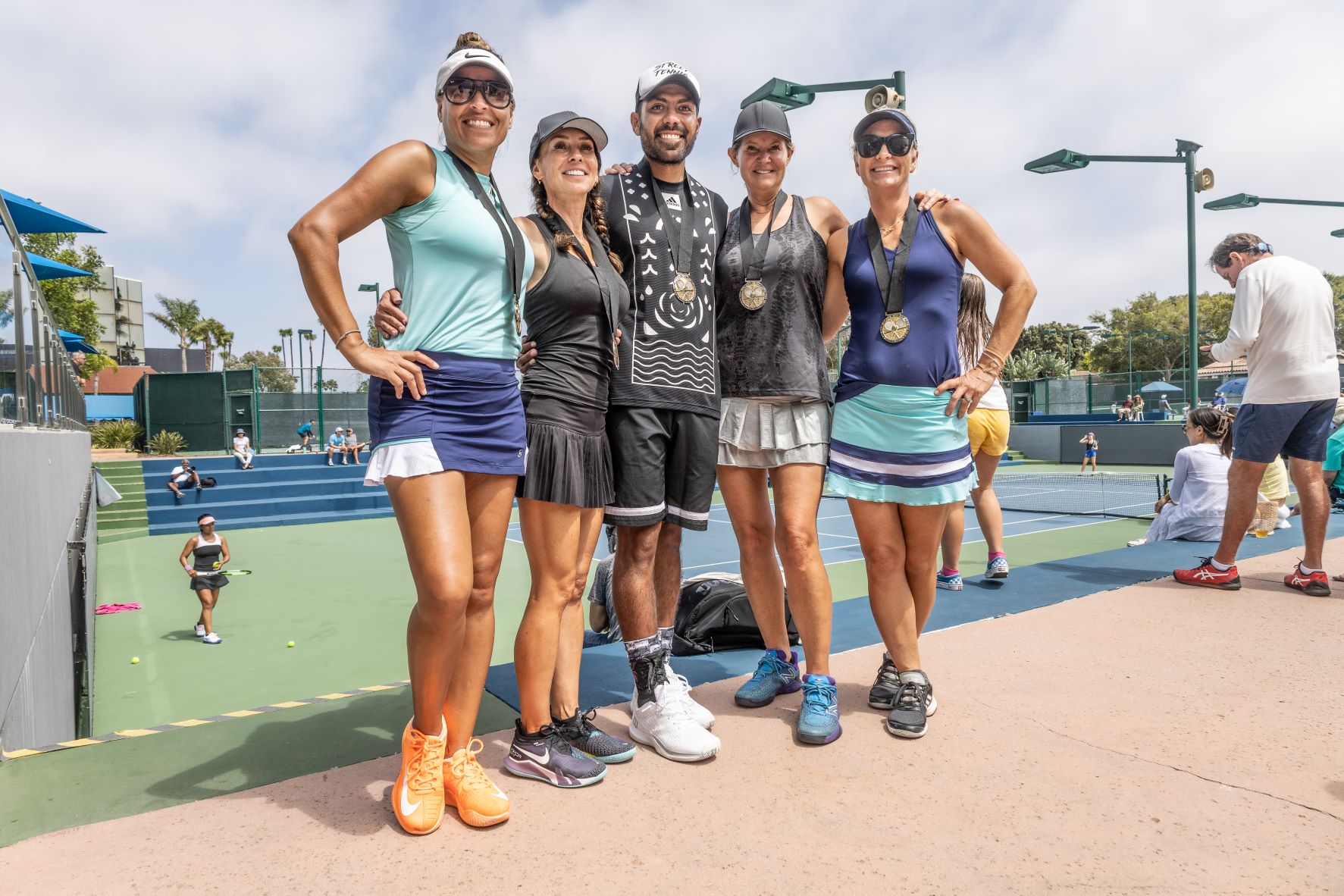