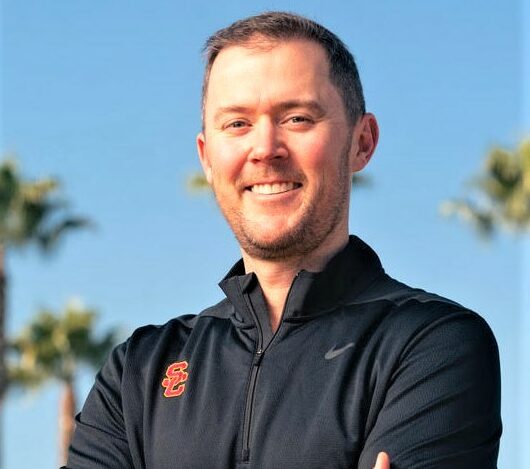 UCLA just blew its best and last chance for the foreseeable future to beat USC in its annual rivalry football game.

How can we make such a definitive statement after Saturday night’s white-knuckle, nail-biting, down-to-the-last-play thriller in which USC outlasted the Bruins 48-45 in front of 90,000 crazed fans at the Rose Bowl?

Well, All Ball should have some credibility on this issue since we predicted in this same space last week that USC would win by 45-42. If the rivalry game were a power ball drawing, we wouldn’t win the $2 billion mega prize but we would surely get one of those $1 million consolation prizes.

The single most important reason we feel confident making that kind of long-range prediction is the same reason that we picked USC to ring the Victory Bell this year: the Trojans have a hot young head coach who is a brilliant offensive innovator.

At age 39, Lincoln Riley is the kind of charismatic young coach who the most talented players want to play for. Like a football magnet, he just naturally attracts the elite guys who see the NFL in their future and want to make sure they’re on a glide path to the pros when they commit to a college.

Riley already groomed quarterbacks Baker Mayfield and Kyler Murray while they were at Oklahoma. He turned them into Heisman Trophy winners and the first overall picks in their respective draft classes.

Now he’s doing the same thing with Caleb Williams, the sophomore quarterback who transferred from Oklahoma after Riley announced he was leaving Oklahoma and coming to LA. After personally putting up a Rose Bowl record of 503 yards of total offense – running and passing — while leading the Trojans to victory Saturday night, Williams has to be considered the favorite to win this year’s Heisman Trophy.

UCLA, on the other hand, has a guy who used to be a hot young coach, who used to be an offensive innovator whose charisma and genius play calling just naturally attracted the most elite high school players who were looking for a launch pad to the NFL.

But Chip Kelly’s glory days at Oregon are long gone, going back to the days          when Myspace and AOL Online were the trending tech darlings. Now they’re yesterday’s news, and that makes him, at age 58, yesterday’s man. Today he looks more like a fat, tired old guy who cares more about keeping his huge salary than he does about working 24-7 and driving his team to a national championship.

When Kelly came to UCLA five years ago after washing out in the pros with both Philadelphia and San Francisco, he was still a big enough name to draw a recruiting commitment from Dorian Thompson Robinson, the top-rated quarterback in the country who was a mega-star at a Las Vegas high school.

Five years later, DTR is still Riley’s highest-rated recruit. His talent is undeniable: he’s an electric runner, an elusive target who runs like a gazelle and is tough to bring down.

But all during their five years together, Kelly has not been able to mold DTR into the kind of reliable pocket passer and decision maker that Williams, at age 19, already is.

That was never clearer than in the last two minutes of Saturday’s game. With USC leading 48-45 and marching toward a clinching score, Williams made one of the few mistakes he made all night. Rolling left on a run-pass-option play, he evaded two tacklers and had an open field in front of him, with plenty of running room to convert the third-down play into a first down.

But Williams had a brain freeze, suddenly launched a wild pass toward the sideline that had no chance of connecting, and USC had to punt on fourth down. So here it was: one last chance for UCLA to win the game, for Kelly to show that all his work with DTR was finally paying off, and for DTR himself to prove to the dozens of NFL scouts in attendance that he is a legit pro quarterback prospect.

With 60 yards to go for a field goal that would tie the game or a touchdown that would win it, and more than two minutes to play, it was all set up for DTR to be the hero in his last game against his team’s archrival.

Instead, the final two plus minutes turned into a microcosm of DTR’s entire five years at UCLA: exhilarating at first, but ultimately maddening and deeply disappointing.

He started out well, with a couple of short completed passes and a couple of escape runs for good gains. But as the clock ticked down and they reached a crucial third down with 1:32 left, the old DTR reappeared at the worst possible time for the Bruins and their hyped-up fans.

Scrambling to avoid a sack that would have made it fourth and long, DTR tried to force a pass that was intercepted by lineman Korey Foreman, who had dropped back into coverage. It was DTR’s third interception of the game.

There was still a minute plus left, but that was the ball game right there and everyone knew it, especially DTR — who left the field in tears.

As a sidebar, Foreman’s game-clinching interception was the feel-good story of the night. Just two years ago he was the nation’s highest rated recruit, a local kid from Corona Centennial, a five-star monster projected to be the next dominant defensive player for USC.

Instead, he barely made the team, hardly played at all in his freshman year, and was quickly labeled a gigantic bust who didn’t have the heart for the game and might quit football altogether. But he stuck with it, came back for his sophomore year, and gradually worked his way into the lineup as a spot reserve.

And when the moment of decision came for USC, he was in the right place at the right time when DTR, as has been his custom for much of the last five years, made the wrong play at just the wrong time.

And here’s the short-term problem for UCLA: as erratic as DTR is, there is no one in Kelly’s talent pipeline remotely ready to step in and provide the kind of dynamic quarterback play and veteran leadership that DTR has provided for the last several years.

His backup is someone named Ethan Garbers, a nice kid from Newport Harbor who was a very good quarterback in high school. But in his few game appearances as a Bruin, he has shown no signs that he is ready to fill DTR’s shoes.

So now USC has punched its ticket for the Pac-12 championship game, probably against Oregon. First, they have to play Notre Dame next Saturday in what has turned into their second-most important rivalry game. But if they win those two games, they will be ranked in the top four in the country and a strong choice to be chosen for the college football playoffs.

And UCLA, which just suffered its second straight loss and fell to 8-3 on the season? They’re in line for nothing except some third-tier bowl game like the Holiday Bowl, the Sun Bowl or the Las Vegas Bowl.

Not exactly what UCLA fans had in mind when they started the season.

Think of the USC and UCLA football teams as ships passing in the night: one is the Titanic, headed to the bottom of the ocean with Captain Kelly oblivious to the iceberg ahead. The other is a super-yacht moored in Marina Del Rey and headed for a Caribbean cruise with Captain Riley decked out in shades and a big grin.

Which ship would you rather be on?

Every relationship in the history of mankind, whether personal, professional or both, comes to an end at some point. It’s just that some endings are a lot more painful and a lot more baffling than others.

That’s why the Dodgers decision this week not to offer 27-year-old former National League Most Valuable Player Cody Bellinger a contract extension was so painful, yet in hindsight so inevitable.

Fifty years from now, when the history of this Dodgers era is written – starting with an astounding streak of ten Western Division titles in eleven years — Bellinger will still be a mystery wrapped inside a riddle wrapped inside an enigma.

In April 2017, when the Dodgers called him up from the minors early in the season, he immediately hit the ball like Roy Hobbs in the great Robert Redford film based on the even greater Bernard Malamud novel The Natural.

It seemed like there was nothing he couldn’t do on a baseball field. Not only was he a great hitter, but he was an outstanding defensive player, anchoring the Dodgers’ outfield with his elite speed and glove skills. He was named to the All-Star Game and the Home Run Derby in his rookie year, and it was no surprise when he was voted Rookie of the Year.

He averaged 40 home runs a year in his first three seasons, and after he was named the NL MVP in 2019 his future was so bright he was being talked about as the cornerstone of the Dodger’s future, a guy capable of taking over from Clayton Kershaw as the face of the franchise when Kershaw inevitably left the team to retire.

Then came the celebration that changed everything. During the 2020 playoffs he smacked a homerun and celebrated with teammate Kiki Hernandez by leaping in the air and smashing shoulders with him.

Although he stayed in the game, it was clear immediately that Bellinger had been hurt in the celebration collision.

He was never the same player again.

In 2021 he was one of the worst batters in the entire National League. In 2022 he was even worse, becoming an automatic out while relegated to the bottom of the batting order.

It got so bad that he was benched during the playoffs, and that was a harbinger of things to come. The Dodgers had to extend him a qualifying offer of at least $18 million by Friday if they wanted to keep his rights, and after weighing the pros and cons President of Baseball Operations Andrew Friedman declined to make an offer and cut him loose.

Now understand: Bellinger can still sign with the Dodgers for a lower figure than $18 million for one year. But the odds are that one of the other 29 clubs will be willing to gamble on a still-young talent who was such a high-level hitter for his first three years.

For Bellinger’s sake, All Ball hopes that he can recover his once-formidable form and find a new home in the Major Leagues.

For the Dodger’s sake, we hope they made the right decision. Keeping in mind that they should be socking away every penny they can to sign Shohei Othani next fall when he becomes an unrestricted free agent – it will take at least a half-billion-dollar deal to get him to move up the 405 – this was a decision they had to make.

Every relationship comes to an end at some point. But few endings are more painful or more puzzling than this one.