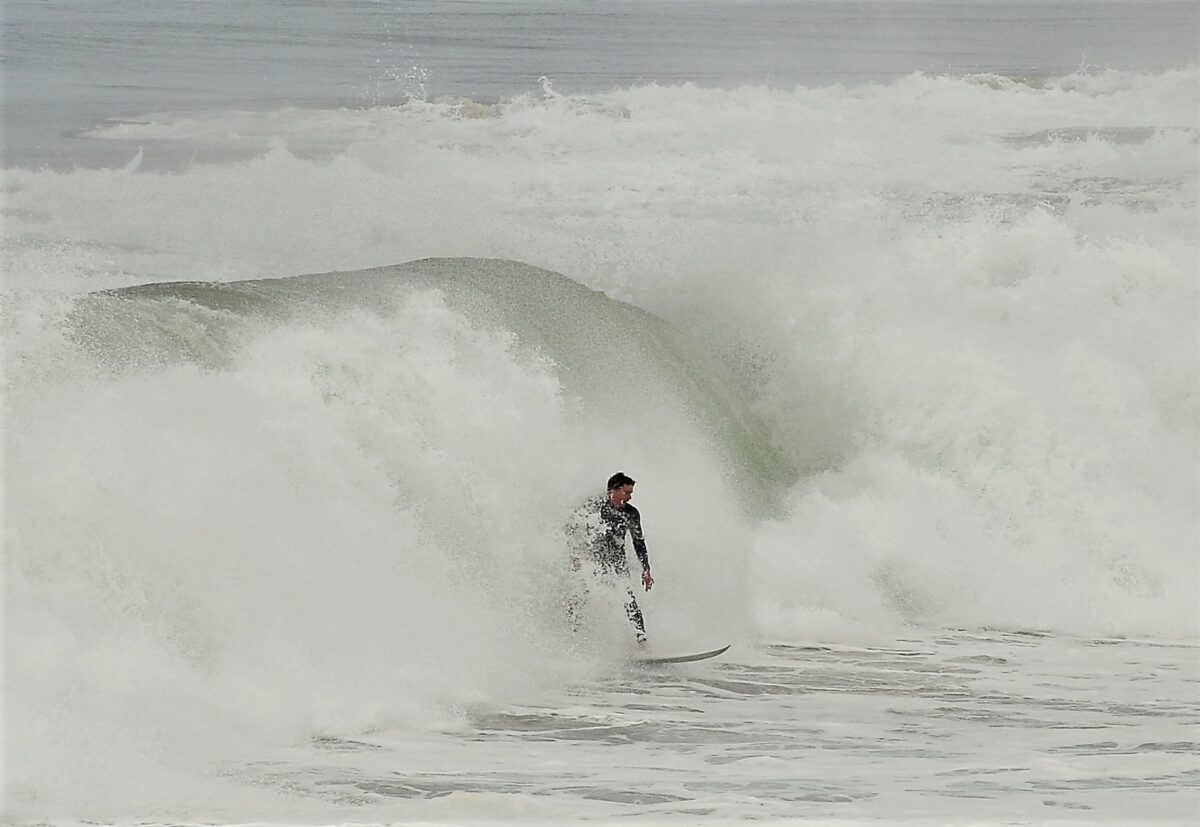 Andrew Ryan wanted just one wave when he jumped off the Hermosa Beach Pier during a giant swell on Jan. 28, 2018. He got it. Photo by Dean Lofgren

Late morning, on Friday Jan. 20, 2018, Andrew Ryan, 30, was disappointed to see a big, highly anticipated north swell barreling in so consistently that it would be impossible to paddle out. He had arrived at the Hermosa Beach pier with the biggest board he had, a 7-0 shaped by his dad Pat Ryan, ET Surf’s long time shaper.

“It’s a magic board. I rode it a few days earlier at Silverstrand in 10-foot waves,” Ryan said.

Like every surfer raised in Hermosa Beach, Ryan knew there is an easy way out to the line-up on big days. Simply jump off the pier. He also knew it’s illegal and with the lifeguard tower on the pier, not easily done undetected.

“I put a button-up shirt over my wetsuit and walked out on the pier, like I was just checking the waves. But they saw my 7-0. A lifeguard truck with its siren on, raced up the beach to the pier, and over the bullhorn shouted, “Don’t do it,” Ryan said. 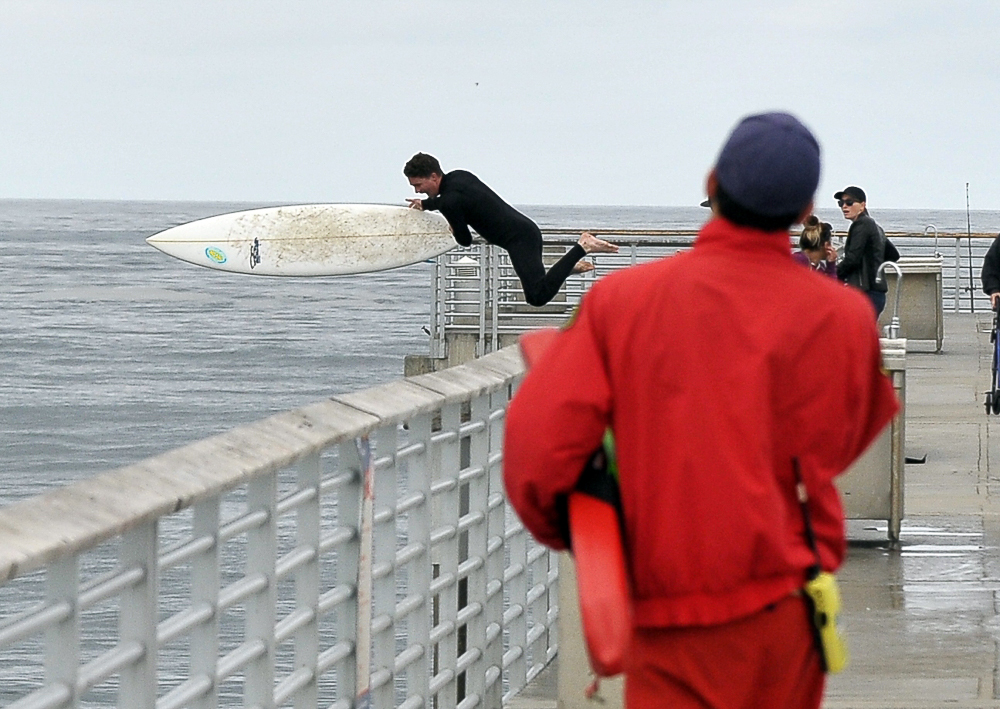 Andrew Ryan leaps from the pier before a lifeguard can stop him. Photo by Dean Lofgren

“Then I saw a guard walking out on the pier towards me. I was thinking, ‘It’s too late to back down now.’”

Ryan stripped off his shirt, stepped over the south side pier railing, tossed his board a safe distance away, and jumped feet first.

He didn’t bother with a surfboard leash because he knew after one wave he wouldn’t be able to paddle back out.

Shortly after he jumped, Baywatch Redondo arrived and over a bull horn, ordered Ryan to paddle ashore. Ryan paddled under the pier to the north side. He was glad he did.

Ryan usually surfs the south side of the pier, where the waves have better shape.

But on this particular day, Ryan said, the waves on the north side were better. 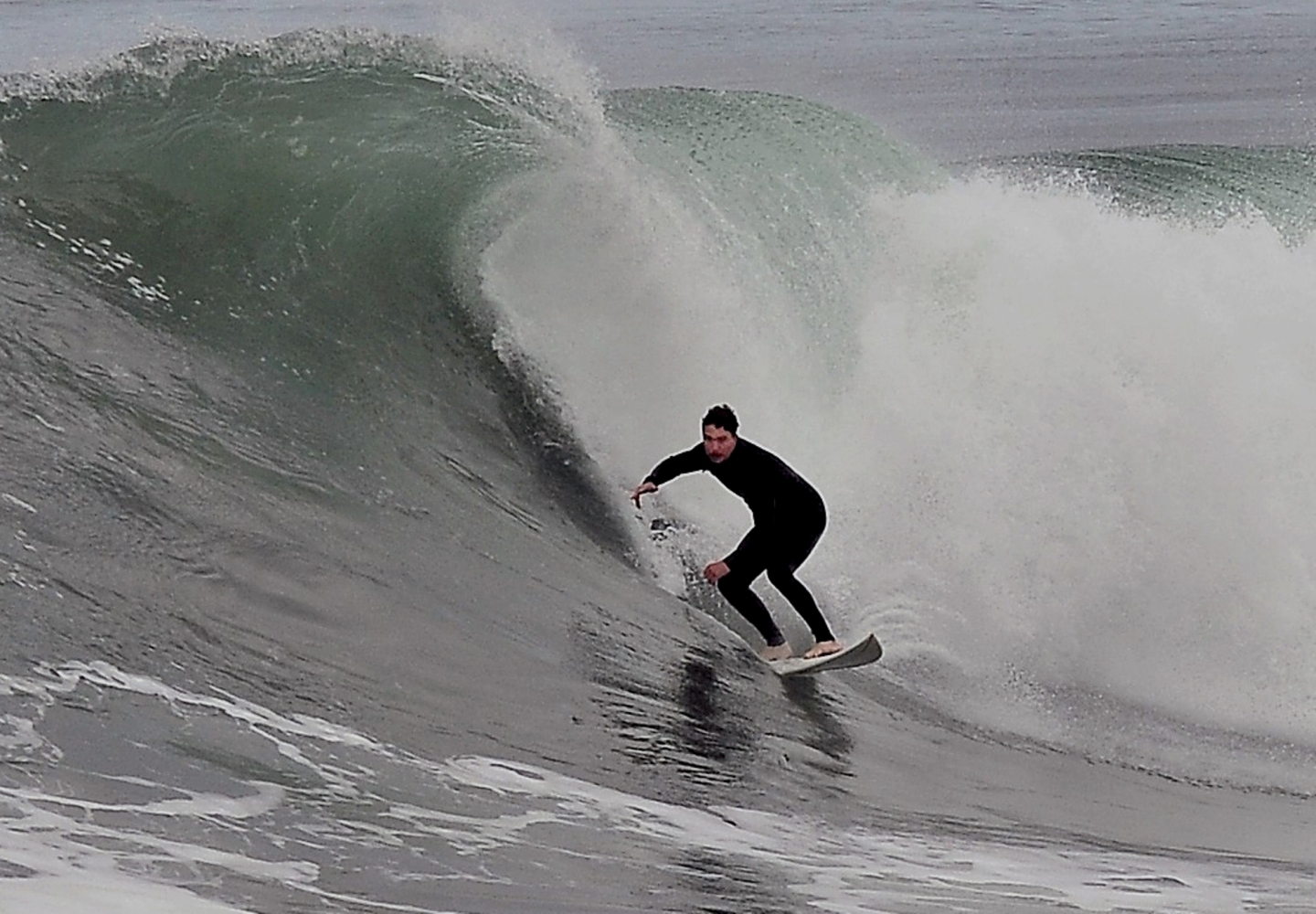 Andrew Ryan waited half an hour for a makeable wave.

While he waited for his wave, Baywatch reappeared. A photo taken from the beach by Dean Lofgren, shows Baywatch close enough to the beach to be rocked by the swells.

“We were both jockeying for position. They’re yelling at me to take the next wave in. I’m yelling back that I need a good wave,” Ryan recalled

He waited nearly half an hour for the wave he wanted. It was double overhead with a hint of a shoulder. 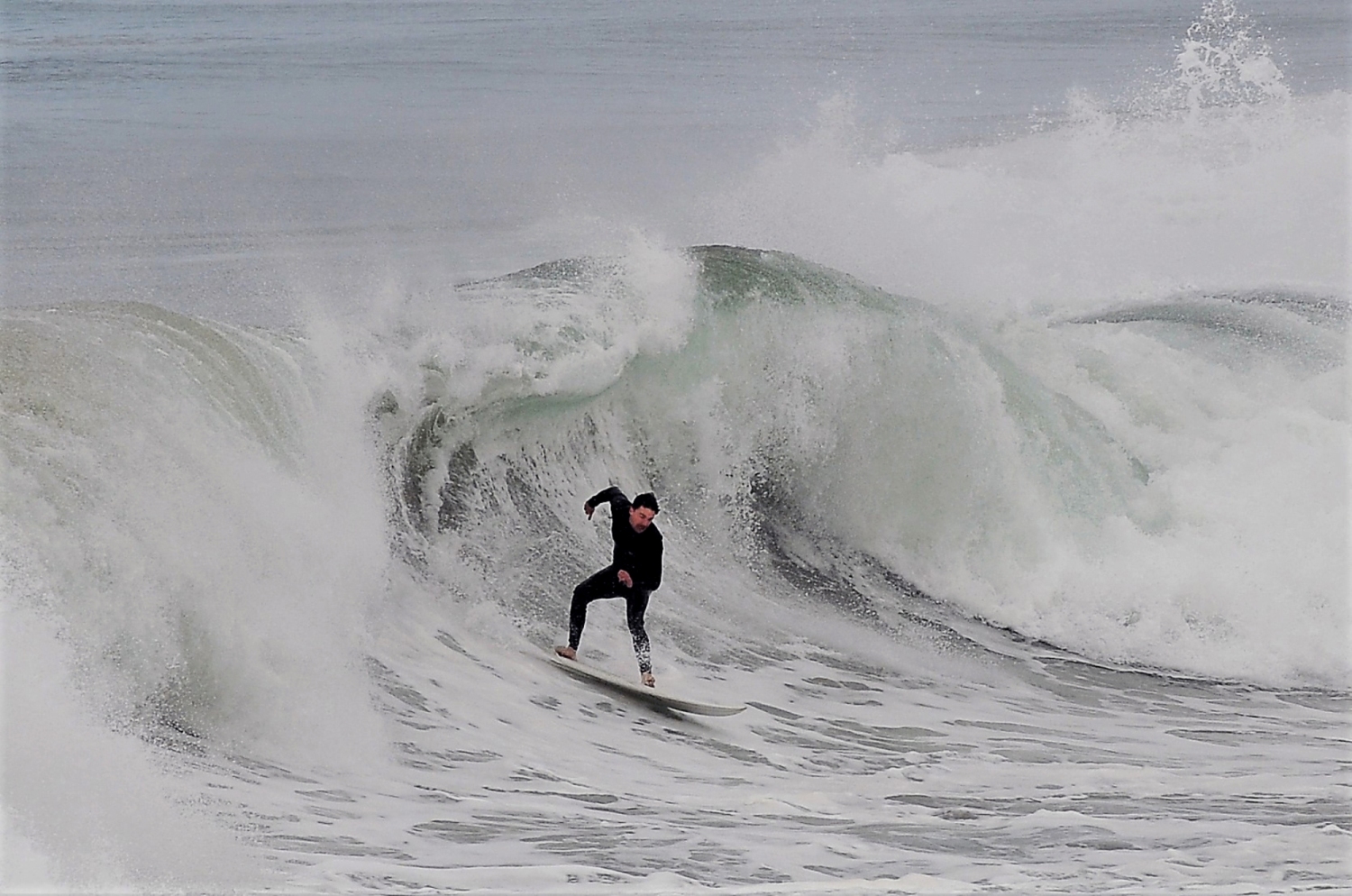 Andrew Ryan didn’t wear a leash because he knew he wouldn’t be able to paddle back out.

“It was steep. After I made the drop I just tried to stay in the pocket. When the wave began to close out, I thought about pulling in, but thought better of it,” Ryan said.

Lofgren’s photos show Ryan racing just ahead of the pitching lip, and then making a hard turn toward shore as the wave explodes behind him.

Lifeguards escorted him to a police squad car on The Strand.

“Mr. Ryan, I might have known it was you. You know I’m going to have to give you a ticket,” said the veteran Hermosa Beach Police Officer, who had watched Ryan grow up.

“The lifeguards on the beach and the police were cool. The cop told me to ‘have a nice day’ when he handed me the ticket,” Ryan said. Jumping from the pier is an infraction and carries a $100 fine for the first violation.  ER 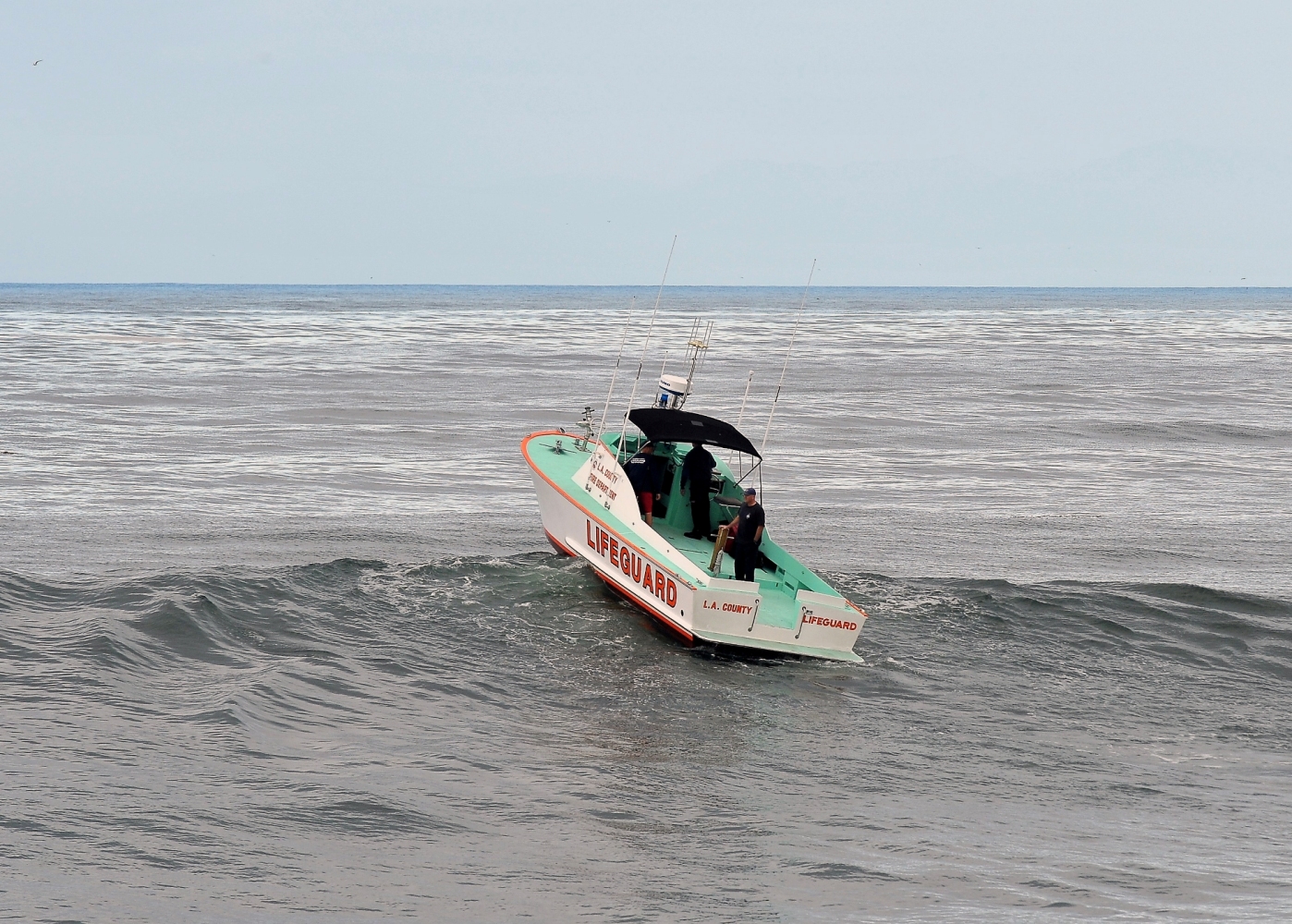 “We were both jockeying for position,” Andrew Ryan said of himself and Baywatch Redondo. 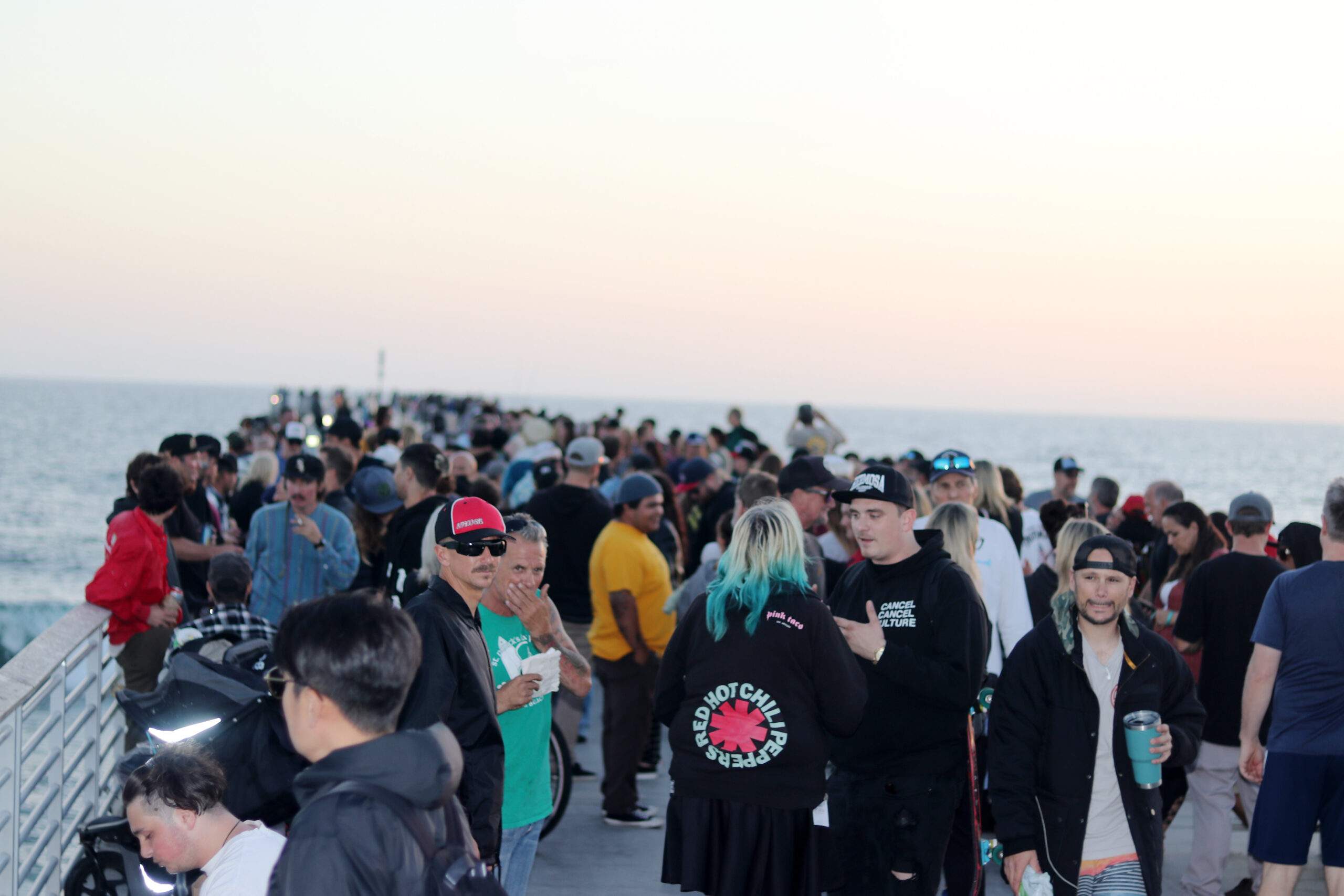 Mourners gather at the Hermosa Beach Pier in memory of Andrew Ryan Tuesday at sunset. Photo by Kevin Cody 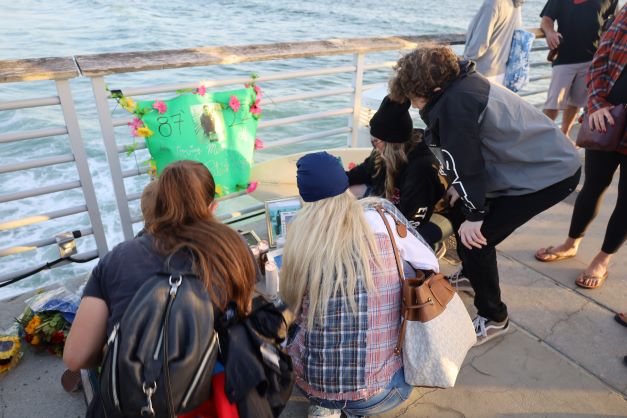 Mourners gathered for a sunset vigil in memory of Andrey Ryan on the Hermosa Beach pier on Tuesday. Photo by Tim Tindall