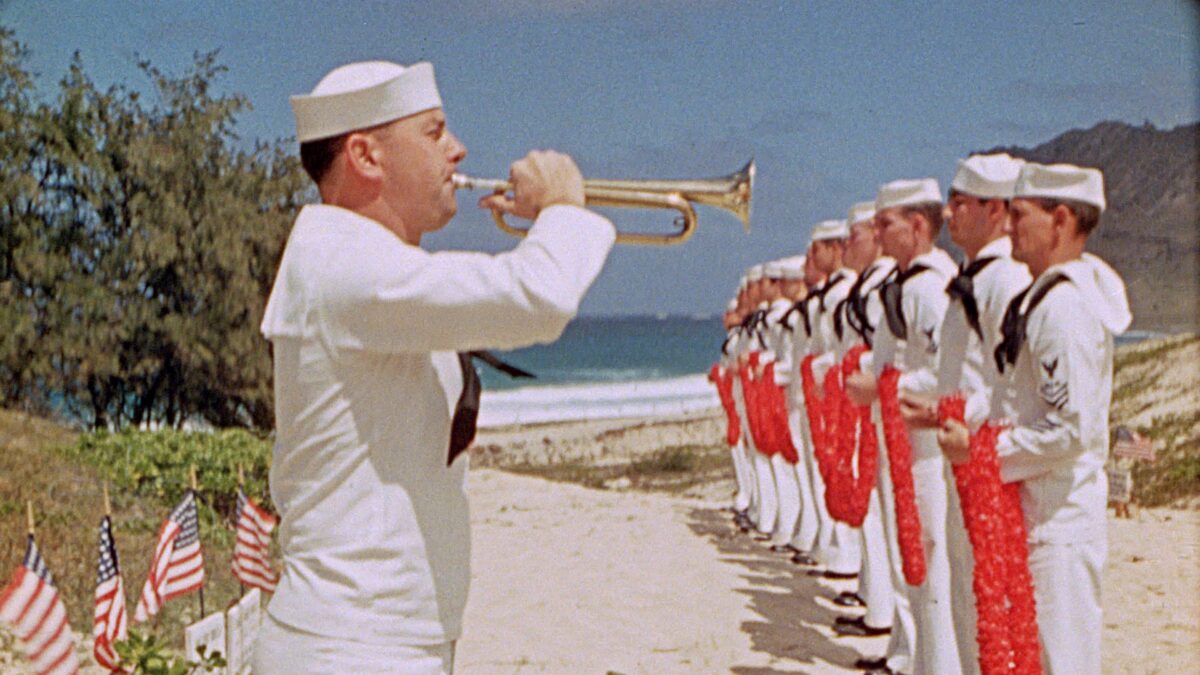 With new, previously unseen footage, director Erik Nelson brings the last horrific months of World War II into view again. The battle for Europe was all but over by April 1945. Hitler committed suicide on April 30, and Victory in Europe Day (V-E Day) on May 8 marked the end of the war in that theater. But unlike Germany who recognized the futility of continuing a war that was no longer economically and militaristically possible, the Japanese in the Pacific theater doubled down. Outmanned and severely lacking in the financial means necessary to continue a war with a foregone conclusion, the Japanese military command determined to fight until their last soldier was dead. This would, at the very least, cause what they hoped would be irreparable damage to their enemy, the American forces. There would be no surrender.

“Apocalypse 45” is fueled by footage shot by filmmakers embedded within the troops. As a reference point, one should see “Five Came Back” about five famous directors who served during the war as documentarians of the fighting. Commissioned by the U.S. Department of War to make films about the various war theaters, for the most part they covered Europe. The directors, all of whom had or would win Oscars, were Frank Capra, John Huston, William Wyler, George Stephens, and John Ford. Unlike the other four, Capra never left U.S. soil but made films under the banner of “Why We Fight, introducing the average American citizen to our foes. About Japan, he produced “Know Your Enemy.”

John Ford is the only one among the five who spent considerable time in the Pacific. His most famous wartime documentary was “The Battle of Midway,” filmed on a handheld camera during the U.S. defense in a critical air-sea battle off Midway Island six month after the bombing of Pearl Harbor. Ford continued his filming in the Pacific but most of his additional footage was believed lost. The filmmakers of “Apocalypse 45” were able to locate some of it, which is feature here.

What is extraordinary about “Apocalypse 45” is the vast documentation of day to day life of the Americans serving in the Army, Air Force, Marines, and Navy. It is stunning how young they all look. It would appear that each group had a photography unit recording them both in the mundane activities on board ship or ground and their fighting against the enemy. Each bomber plane had a camera on the wing to record the air battles and credit for the “kills.” The sheer proximity to the fighting put these camera-wielding servicemen in the same danger as their colleagues with guns and bayonets.

Director Nelson devised an ingenious method to try tying together the clips he found by dividing his documentary into short chapters, sometimes showing the slate board identifying the officer directing the footage and the date and location of the shots.

We see footage of the everyday soldiers and their day-to-day lives alongside a view of the wounded and the fire fights on the ground. But it’s the fighting of a tenacious and ruthless enemy whose culture was so alien to Americans who couldn’t believe that they would revere the sacrifice of death, which is stunning even today.

A sobering clip of General Curtis LeMay encapsulated the continued fighting that would end in deafeat for the Japanese. “Wars don’t end until you kill enough people.” Until August, the Japanese high command were willing to sacrifice every single one of their soldiers even though they could no longer “win” this war. 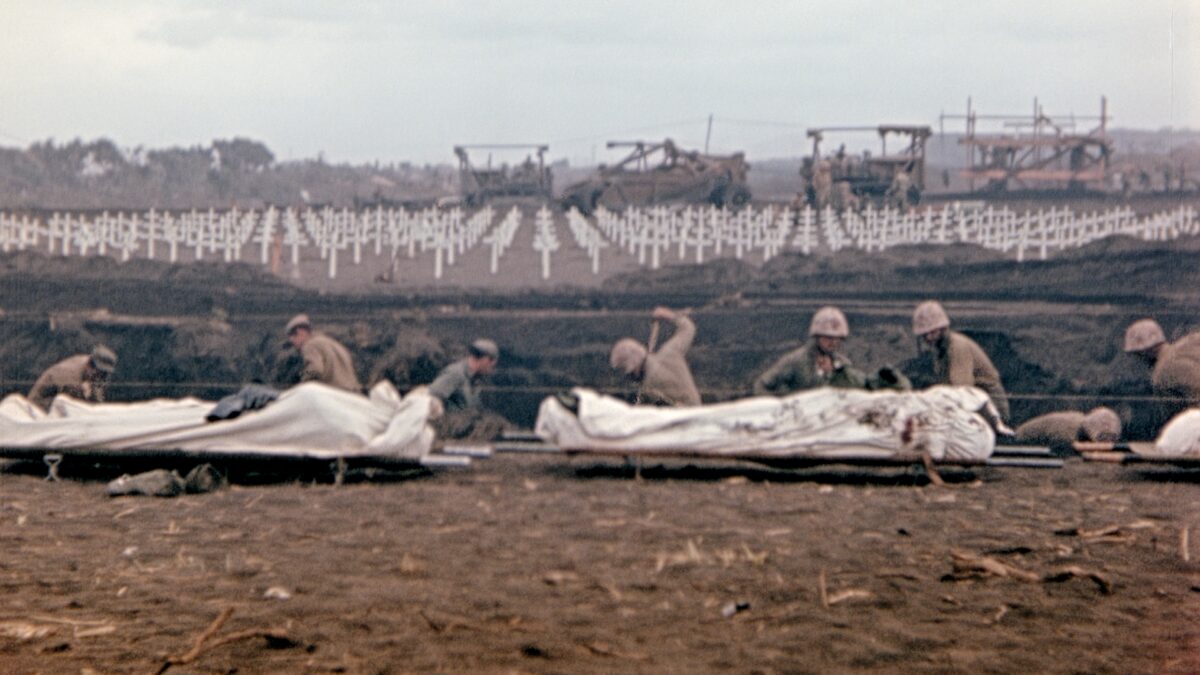 Graves being dug after battle of Iwo Jima, Spring 1945. 6800 Americans were killed on that small island. Photo courtesy of Discovery.

We are shown footage of the raising of the American flag at Iwo Jima, a battle that had not yet been won and where 6,800 Americans and almost 22,000 Japanese soldiers perished. The footage of the invasion of Okinawa which was actually a trap set by the Japanese to inflict maximum damage on an army of far superior numbers resulted in 12,500 Americans deaths. 110,000 Japanese soldiers died in those battles. Film of kamikaze pilots preparing for battle as well as their hits on American ships is stunning.

With the war against Japan dragging on despite their huge losses, and months to go until the Allied planned invasion of Tokyo, President Truman made the decision to drop the Atomic bomb, quickly securing the capitulation of Japan and ending the war.

Director Nelson’s inspired use of the found film clips is immensely aided by the voice over narration of some of the last remaining veterans of the Japanese theater. All in their 90s, they give an invaluable perspective that is remarkably down-to-earth and straightforward. Nelson succeeded in putting a human face to the experience of war.

If there is a weakness, the short debate on the ethics of dropping the bomb adds nothing to the previous narrative. This was a film about the futility of trying to end the war and the countless lives lost to the dogged determination of Japan to continue killing until their last man was dead. The American firebombing of Tokyo in March killed more civilians than Hiroshima and Nagasaki combined.

The inclusion of an ending segment on the “Greatest Generation” also feels gratuitous. This doesn’t fit with the previous tone of the film and seems like unnecessary filler. Better to have left it with just the narration of the remaining veterans who gave their time and insights to this marvelous film. Although only a few soldiers contributed their voices, many more contributed their insights to the filmmakers. The final credits pay tribute to these men showing photos of what they looked like during the war juxtaposed with current day pictures. Stay to end.

Streaming on Discovery+ beginning May 27.