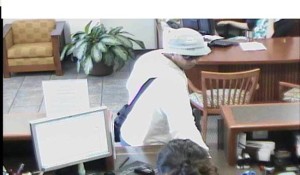 The robber, who is described as being a white man and between the ages of 30 and 45, has not been found. Photo courtesy of the Hermosa Beach Police Department.

A  man robbed the One West Bank in Hermosa Beach at gunpoint Monday afternoon, according to police reports.

Police said the man brandished a handgun and demanded money. Bank employees complied with his orders and handed him several thousand dollars. The man then ran on foot from the bank down Aviation Boulevard and has not been found, according to reports. The bank is located on the 1100 block of Pacific Coast Highway.

The man, described as white and between the ages of 30 to 45, was wearing a black t-shirt with a white zip up hoodie, blue Adidas sweat pants and a light blue fisherman’s hat.The  Hermosa Beach Police Department responded to the robbery at approximately 3:12 p.m.

Anyone with information is urged to contact Detective Dean Garkow at 310-318-0348 or dgarkow@hermosapolice.org.