Advertisement
Added on February 7, 2020  Judy Rae  around and about , newsletter , Palos Verdes

Around and About February 2020 Peninsula 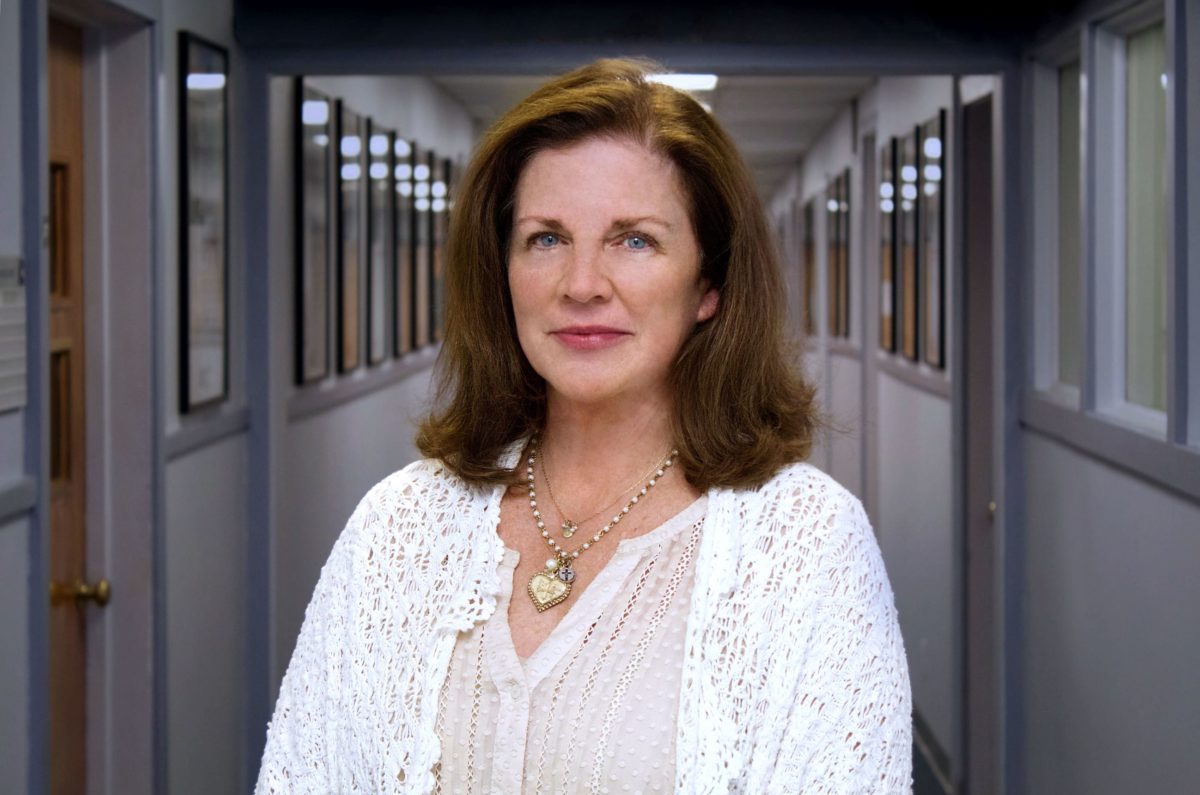 In her new and expanded role, Spillane will oversee the institute’s communications and government relations strategy in addition to leading the organization’s education and training efforts.

Previously, as Vice President for Education and Executive Communications at the Lundquist Institute, Spillane was instrumental in launching the institute’s first doctoral program in translational biomedical research, the first comprehensive degree of its kind.

Spillane brings with her more than 30 years of management experience in education and training, outreach and communications. Prior to her work with The Lundquist Institute, she launched and was Program Administrator for UCLA ACCESS, an umbrella program which became a national model for admissions and training for graduate students entering Ph.D. programs.

While there she worked closely with The Lundquist Institute’s current President and CEO David Meyer, PhD.

Spillane’s promotion comes as The Lundquist Institute enters a new era following its recent name change, which followed a $70 million gift from philanthropists Melanie and Richard Lundquist. The institute also opened a $63-million, four-story, 78,000 square-foot research building earlier this year that is equipped with some of the most advanced life sciences technology and contains an 18,000 square foot incubator, “BioLabs LA at The Lundquist.” More at https://lundquist.org. 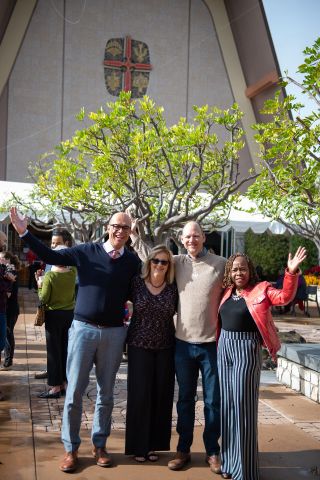 St. Peter’s by the Sea Presbyterian Church is celebrating the 60th anniversary of its founding in 1959 by undertaking a multi million dollar campaign to renovate the sanctuary, preschool, and other community service facilities. Called Widen Our Welcome, the campaign led by Rev. Paul Barrett and co-chaired by Valerie Ryan, InaMarie Johnson, and Dan Bolton, is closing in on its goal. Over 200 members and their families came together on the St. Peter’s campus the evening of December 7 to celebrate and honor the church’s history and to reminisce about the many benefits across generations of members through worship services, music, youth programs, and service projects over the last six decades. The St. Peter’s campaign to renovate campus buildings is just one part of its commitment to further expand its spiritual role in the community and grow its worship, service, and educational efforts. 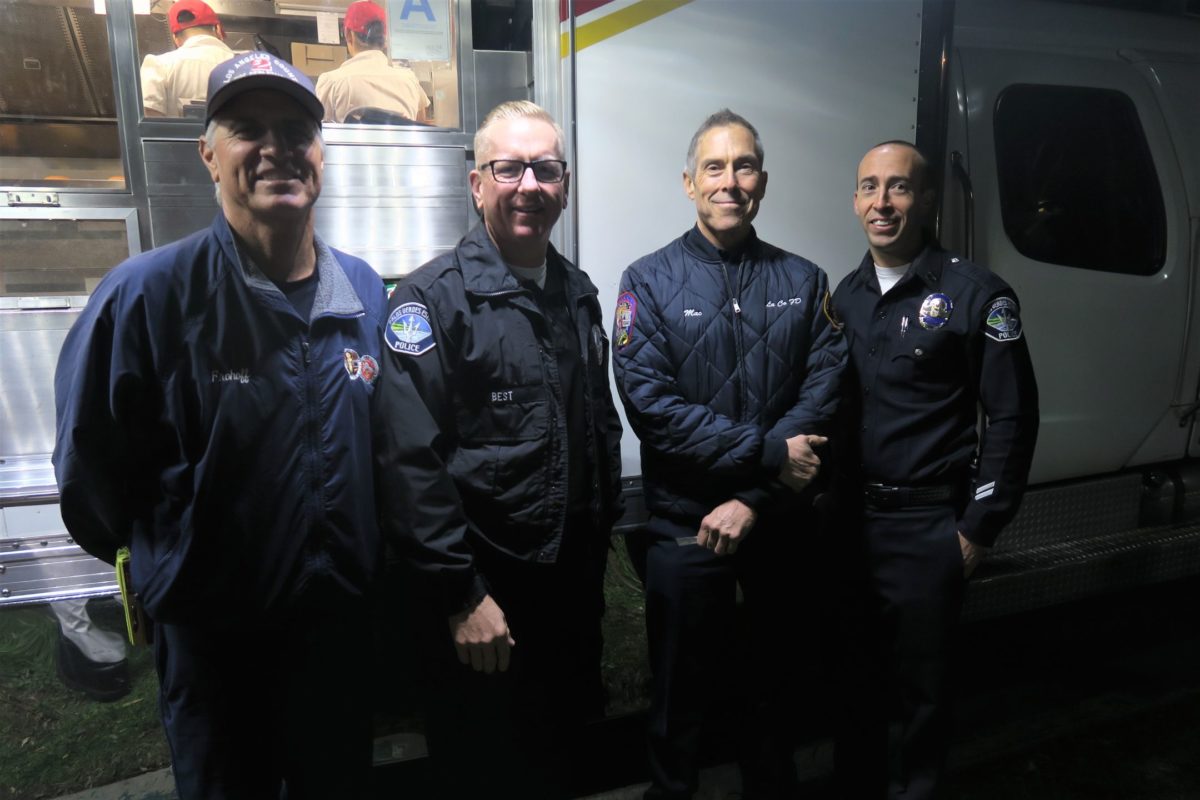 Palos Verdes Estates City Hall hosted a community police force and fire department appreciation evening. Catered expertly by In-and-Out Burgers on a chilly winter night outside in the plaza. Guests wore smiles of appreciation and the Malaga Cove Christmas Tree lighted the plaza gathering. Thank you to our Police and Fire Departments from Peninsula Magazine! 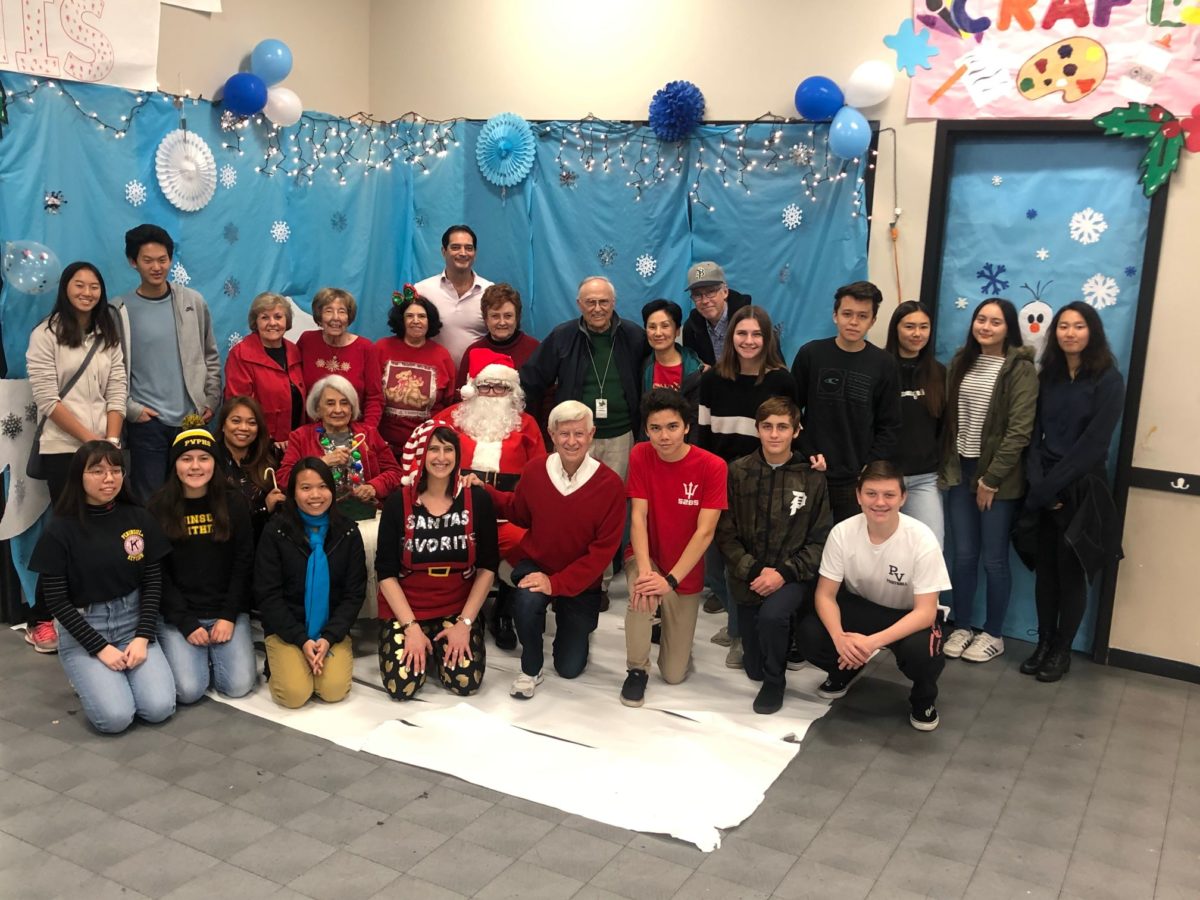 Members of the Kiwanis Club of Rolling Hills Estates along with Palos Verdes Peninsula High School Key Club members and Palos Verdes High School Kiwins, joined Santa and Mrs. Claus at the annual Children’s Christmas Party. Student volunteers helped Boys & Girls Club students of Harbor City make tree ornaments. Santa asked each child “What is something you will do to help someone else?” before gifting presents donated by the Kiwanis Club. After sharing what they would do to help others over the holiday, these happy children opened their gifts. 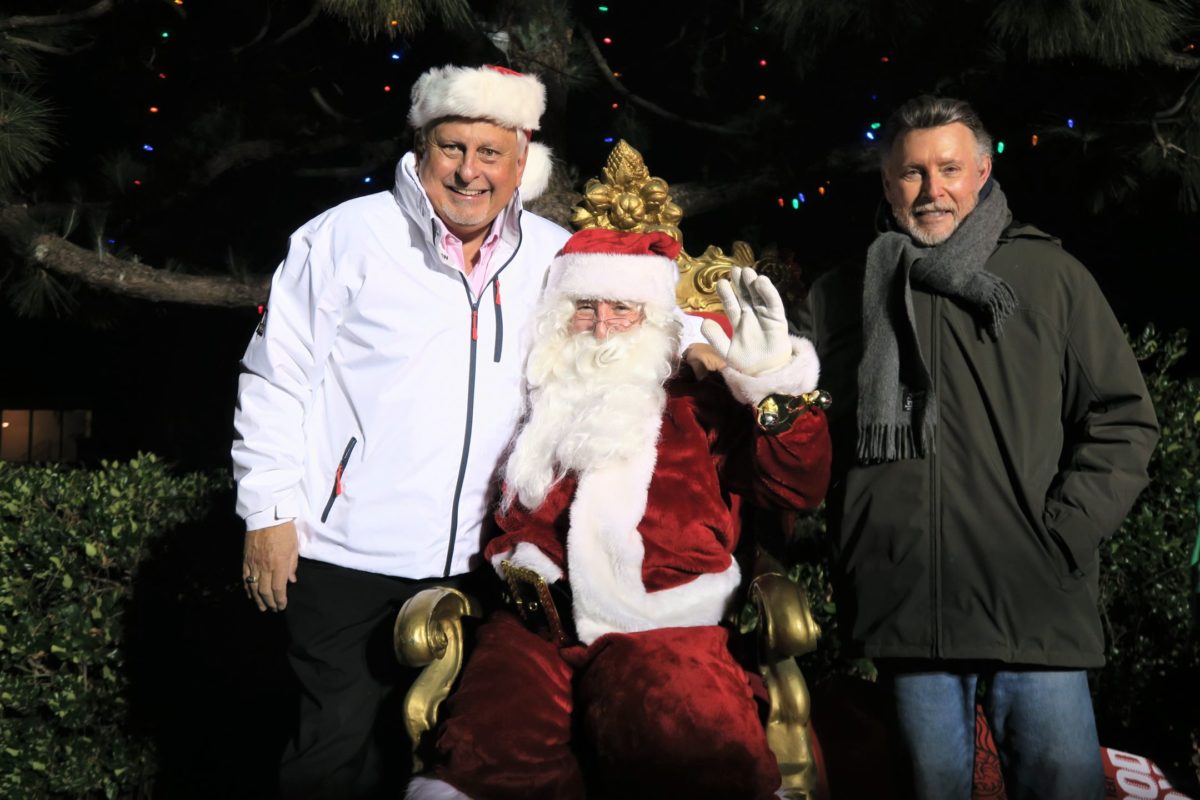 With high anticipation, lots of commotion, sirens and firetrucks and police in a brigade, Santa Claus came to Malaga Cove Plaza on December 24th, Christmas Eve.. The lines were long with families waiting patiently in the cold to meet Santa. He was very jovial exiting the Firetruck and was flanked by two Palos Verdes Estates officials, Mayor David McGowan and Councilman Sandy Davidson. The parade commenced at Coronel Plaza at 5:30PM and then traveled down the hill ending at Malaga Cove Plaza at 6PM. It’s an annual event not to be missed! 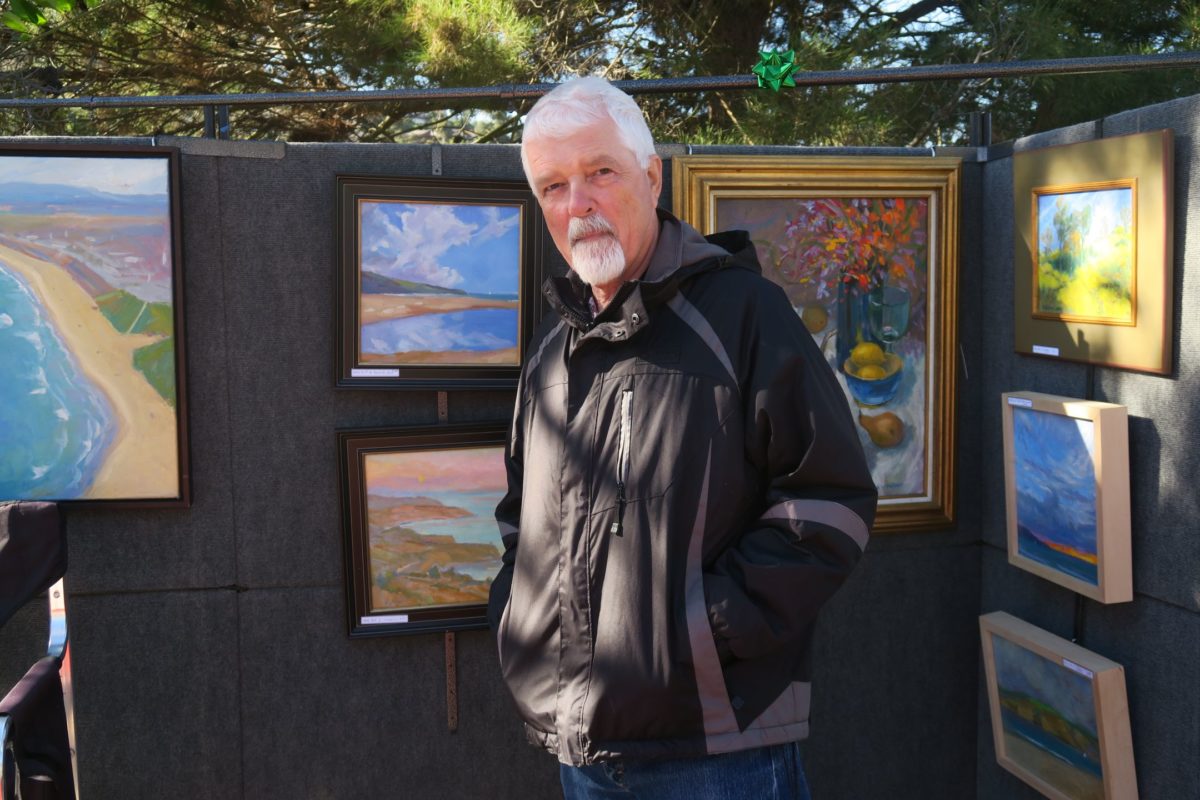 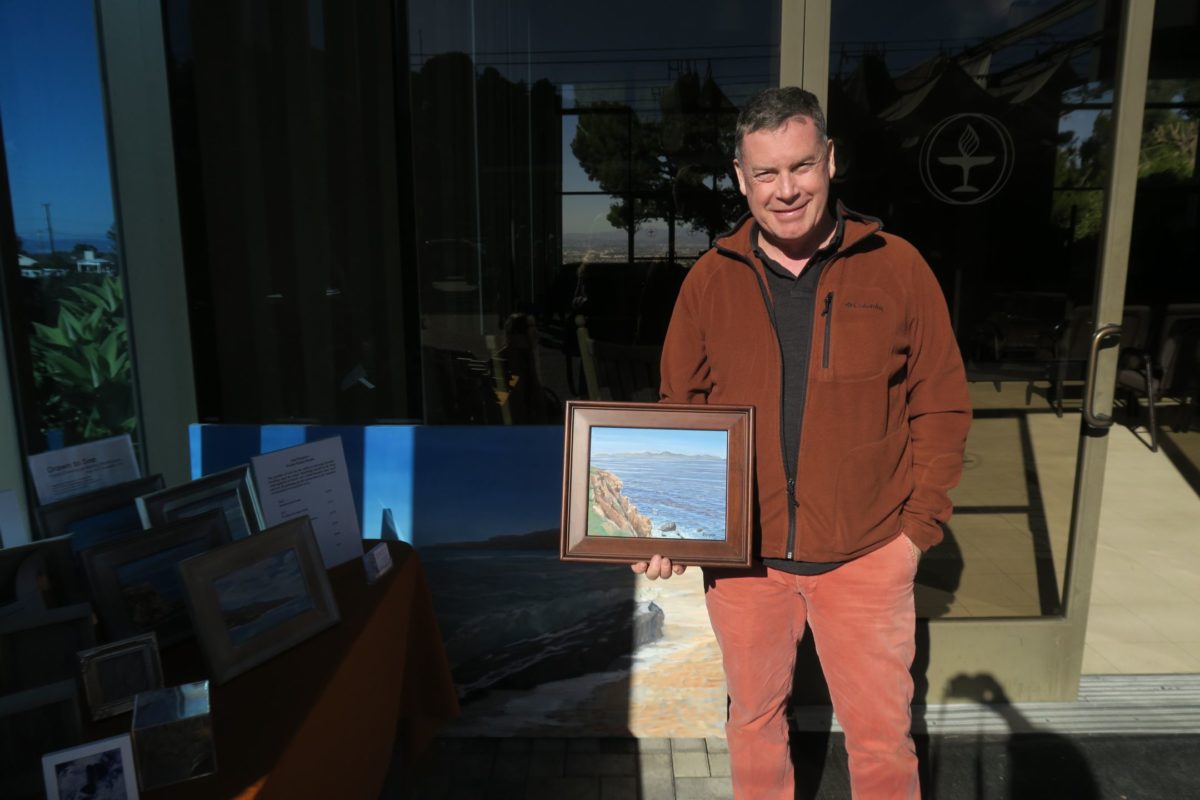 On Sunday morning, December 8th, a juried group of professional and gifted amateur artists created a tantalizing selection of small and miniature paintings, drawings and sculpture specifically for the show. Pacific Unitarian Church in RPV was the venue overlooking the snow capped mountains and ocean. The day was divine with an intimate outdoor show held primarily in the verdant hillside church campus. Their slogan was, “Come for the art, stay for the company, leave with gifts!” 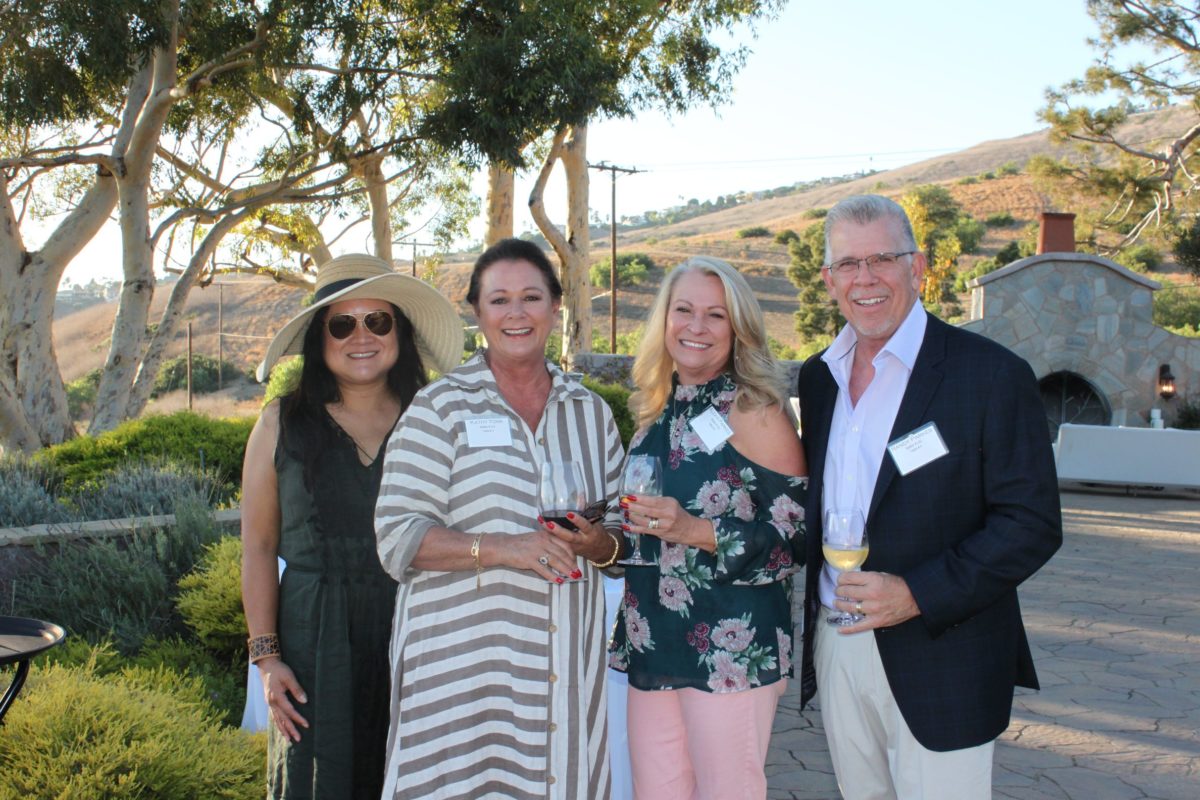 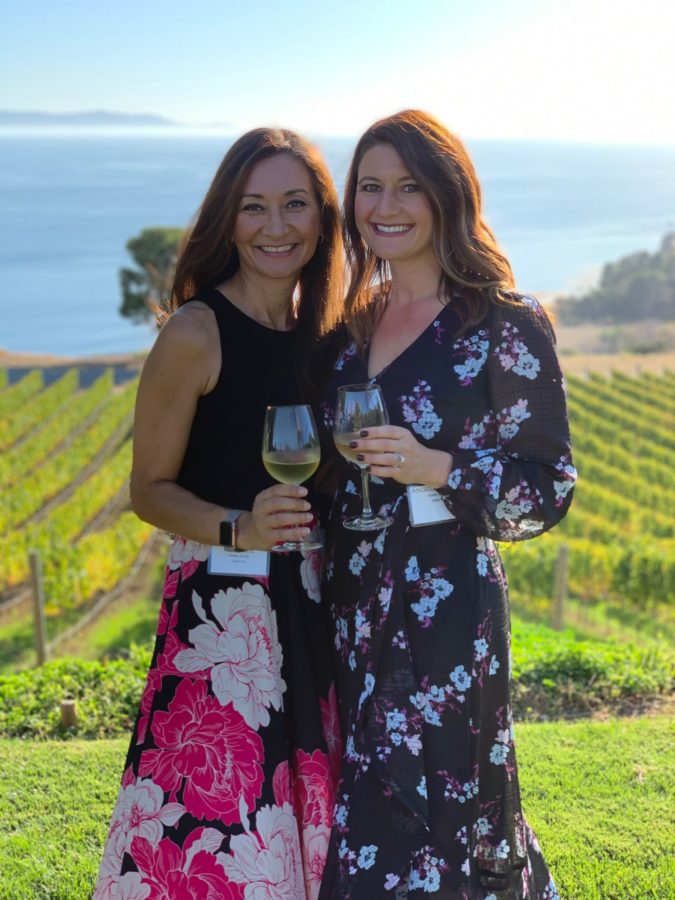 The afternoon began for VIP guests with a rare opportunity to take a stroll with owner and former PEF trustee, Jim York, through his vineyard while sipping on a glass of crisp Chardonnay.  A reserve cellar tasting paired with delicious bites from Chef Dora followed.

All of the guests then enjoyed a sunset reception sipping on Catalina View Wines, specialty crafted cocktails and appetizers, while they enjoyed the breathtaking view of Palos Verdes’ coastal bluffs.  This was followed by an unforgettable dinner created by Chef Dora which featured local fresh produce and exclusive wines by Catalina View Wines. 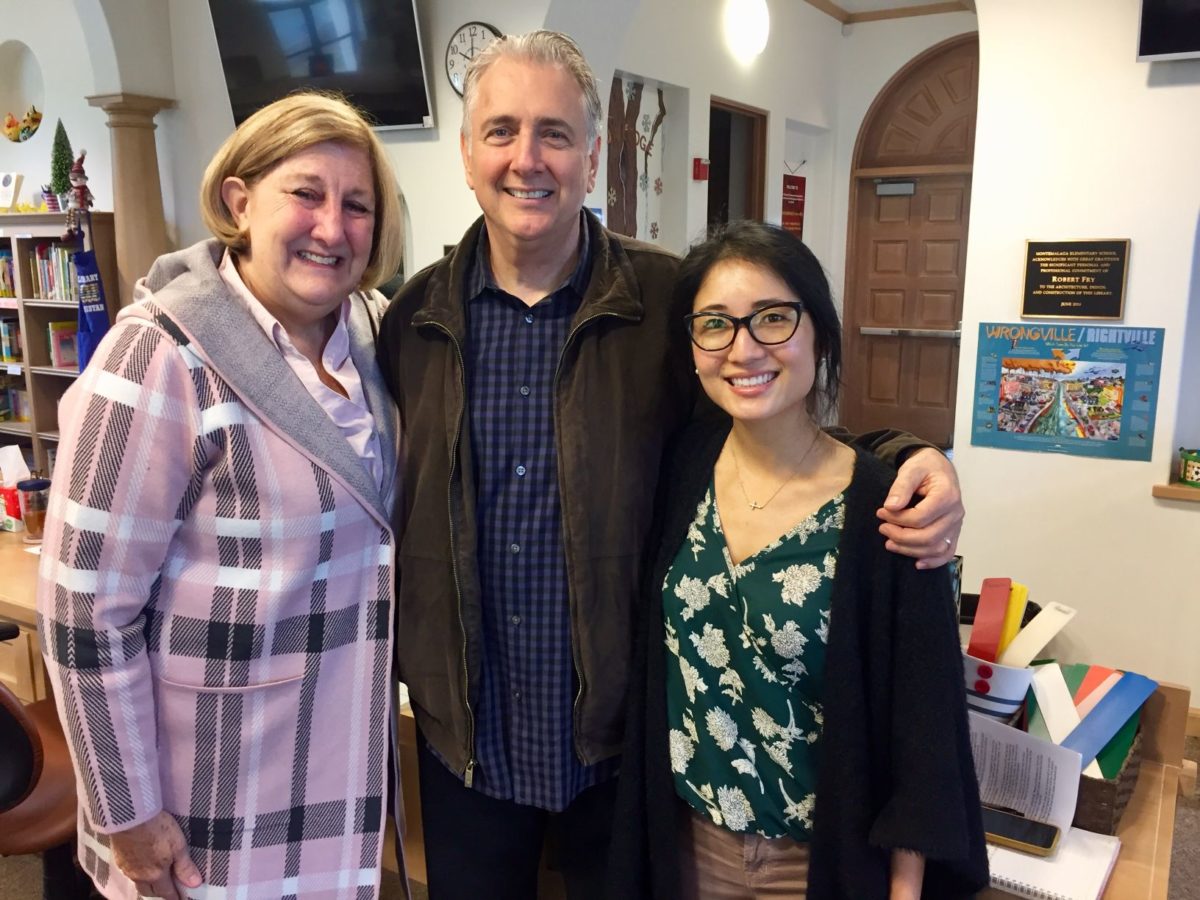 On January 14th, Dr. Greg Allen, Director and Founder of Freedom4U, came to Montemalaga Elementary school to address parents about how to incorporate and balance technology at home with their families. He discussed putting together a vision for the family. He called this a “reset to being real.” “The goal is to align our external lives with the values of our inner selves, he discussed. He talked about being a good technology example for your kids and for parents to teach their kids how to live by being connected with their inner selves and to not live solely externally. He mentioned how not keeping social media in check can lead to stress and depression in kids who aren’t taught that what they see is only 50% or less sometimes of the real picture. Also teaching kids what is appropriate to post and when to refrain from posting possibly hurtful comments towards somebody else. He recommended parents visit: www.connectsafely.org to learn more safety tips and advice.