It’s been a year since Leonard Armato stepped down as commissioner of the Association of Volleyball Professionals (AVP) and changes brought on by the new regime — along with a number of new teams — will begin to be noticed this weekend when the players hit the courts in Ft. Lauderdale, Fla. 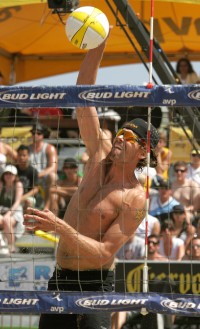 The most visual change will be the color scheme at the events on the 2010 tour. After a four-year relationship with Crocs, the AVP signed a new title sponsor. With only a little over two weeks before the first tournament, AVP CEO Jason Hodell announced that the AVP had reached a multi-year deal with NIVEA. The iconic blue color will be prominently featured, turning each event site into a sea of blue.

Redondo Beach resident Matt Fuerbringer is among the top players in the AVP and was ecstatic when he learned of the new partnership.

“I was more fired up than relieved,” Fuerbringer said. “I believe in our product and knew it would just be a matter of time before we signed one (title sponsor).  The AVP has done a great job all off-season and I look forward to more sponsors jumping on board throughout the season. I do want to buy the CEO of NIVEA a beer and thank him for joining our AVP family.”

Perhaps not as noticeable, but equally as vital to the AVP’s change of direction, came in February when Mike Dodd was named the new commissioner of the AVP.

Dodd, of Manhattan Beach, brings a wealth of knowledge to the position. The former Mira Costa High School standout earned nearly $1.8 million as a player on the beach circuit and was a five-time winner of the Manhattan Beach Open.

Throughout his volleyball career — which included being an Olympic medalist, coach and broadcaster — Dodd has seen the ups and downs of the AVP. He believes his familiarity of international competition, experience as a business owner and understanding of the sport from the lowest level up will not only benefit today’s players but those of future generations.

“Our short-term goal is to get our tour sponsorship and cash flow and basic business model more secure,” Dodd said. “Long-term is to continue what we start this year and build the grassroots level, creating more opportunities for more players.” 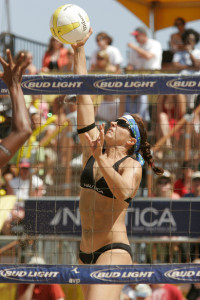 After missing most of last season, two-time Olympic gold medalist Misty May-Treanor returns to the court with a new partner – Nicole Branagh, the 2009 AVP MVP. File photo by Ray Vidal

The AVP’s outreach to the volleyball community includes:

A Qualifier Tour consisting of nine two-day tournaments and a five-tournament Developmental Tour for players age 26 and under where the team from each gender accumulating the most points from each tour receives automatic main draw berths into the first four large-field events of 2011;

The Barefoot Wine AVPNext Series where the winners from 24 leagues throughout the country, including Volleyball Ventures in Manhattan Beach, advance to a one-day qualifier on Aug. 17 in Chicago with the male and female winning teams earning a main draw in the AVP NIVEA Chicago Open. Visit www.vbventures.com for information;

Eight AVP Juniors’ camps will be held throughout the season including Manhattan Beach from Aug. 17-19.

Coming off a transition year and dealing with the difficult economy, the AVP has reduced its 2010 tour from 17 to 12 events with seven of the tournaments being held in California. Local events include the Huntington Beach Open, June 3-6; the Hermosa Beach Open, July 16-18, and the Manhattan Beach Open, Aug. 19-22.

Dodd said he is concerned about alienating many parts of the country, but the schedule reduction needed to be made.

“This schedule lends itself to be run efficiently and economically,” Dodd said. “Obviously, people here in California will be ecstatic. We had a great event in Atlanta that we didn’t go back to. There are other areas that we will need to eventually get back to. With the nature of beach volleyball now being an Olympic sport and our best players having competed internationally, I don’t know if we need as many tournaments. There are only so many weekends in the summer.”

Another change this season will come via the television channel. The AVP signed a two-year agreement with ABC and ESPN which will televise 13 AVP events (four on ABC, nine on ESPN2) in 2010. Coverage begins Sunday when the women’s finals will air at 2:30 p.m. on ESPN2.

Each off-season, there are a number of players switching teams and this year is no exception. Missing from the women’s field (at least for the majority of the season) will be Kerri Walsh who, along with husband and AVP star Casey Jennings, is expecting the couple’s second child at the end of May. After the birth of their first child on May 22, 2009, Walsh returned to the court in August. With two small children, it will be more of a challenge to duplicate the feat this year.

Back on the scene will be Misty May-Treanor who competed in only one event in 2009 after suffering an Achilles tendon injury. The two-time Olympic gold medalist will team with Nicole Branagh, her first partner other than Walsh since 2001, splitting up last year’s top team of Branagh and Elaine Youngs.

Branagh, the AVP Best Offensive Player and MVP in 2009, leaves Youngs after the two joined forces at the end of 2006. The pair competed in the Beijing Olympics in 2008 before winning nine events while advancing to the finals in all 12 of their regular season events last season.

Youngs will reunite with Rachel Wacholder who spent most of 2009 on maternity leave. The pair won five championships in 23 tournaments from 2005 until mid-2006 when the two had a tumultuous parting of the ways.

Last season’s second-place team of Jen Kessy and April Ross and third-place finishers Annett Davis and Jenny Johnson Jordan remain together and will be ranked among the top with the aforementioned new teams.

Other new teams to watch will be local players Jenny Kropp (Manhattan Beach)/Brittany Hochevar (Hermosa Beach) and Jennifer Fopma, who split with Hochevar to play with Whitney Pavlik, the 2008 Rookie of the Year.

Also contending will be the teams of Carrie Dodd (Hermosa Beach)/Dianne DeNecochea (No. 4 in 2009), Brooke Hanson/Lisa Rutledge (No. 5 in 2009), Angie Akers (Redondo Beach)/Tyra Turner, Priscilla Lima (Redondo Beach)/Tatiana Minello, and the sibling team of Katie and Tracy Lindquist.

On the men’s side, Olympic gold medalists and three-time defending AVP champions Phil Dalhausser and Todd Rogers enter the season as favorites with the second- and third-place teams of 2009 — John Hyden and Sean Scott (Redondo Beach) and Jake Gibb and Redondo Beach native Sean Rosenthal – on their heels.

Fuerbringer, the Rookie of the Year in 2003, split with Jennings after a seven-year partnership. The pair won at least one title from 2004-07. Lucena, who spent the first three years (2003-05) of his career alongside Dalhausser, will join Fuerbringer to form a team that should be a contender at every event.

“Nick has been a great player for many years, but he is just entering the prime of his career and still has a lot of upside in his game,” Fuerbringer said. “I look forward to both of us helping each other play the best volleyball of our careers and have a lot of fun in the process. Oh, yeah, bringing home a few titles as well.”

Another pair to watch will be the local team of 6-foot-9 Bill Strickland (Manhattan Beach) and Aaron Wachtfogel (Hermosa Beach). Strickland finished the 2009 campaign among the top 10 leaders in blocks and killing percentage, while Wachtfogel was fifth in digs with 5.13 per match.