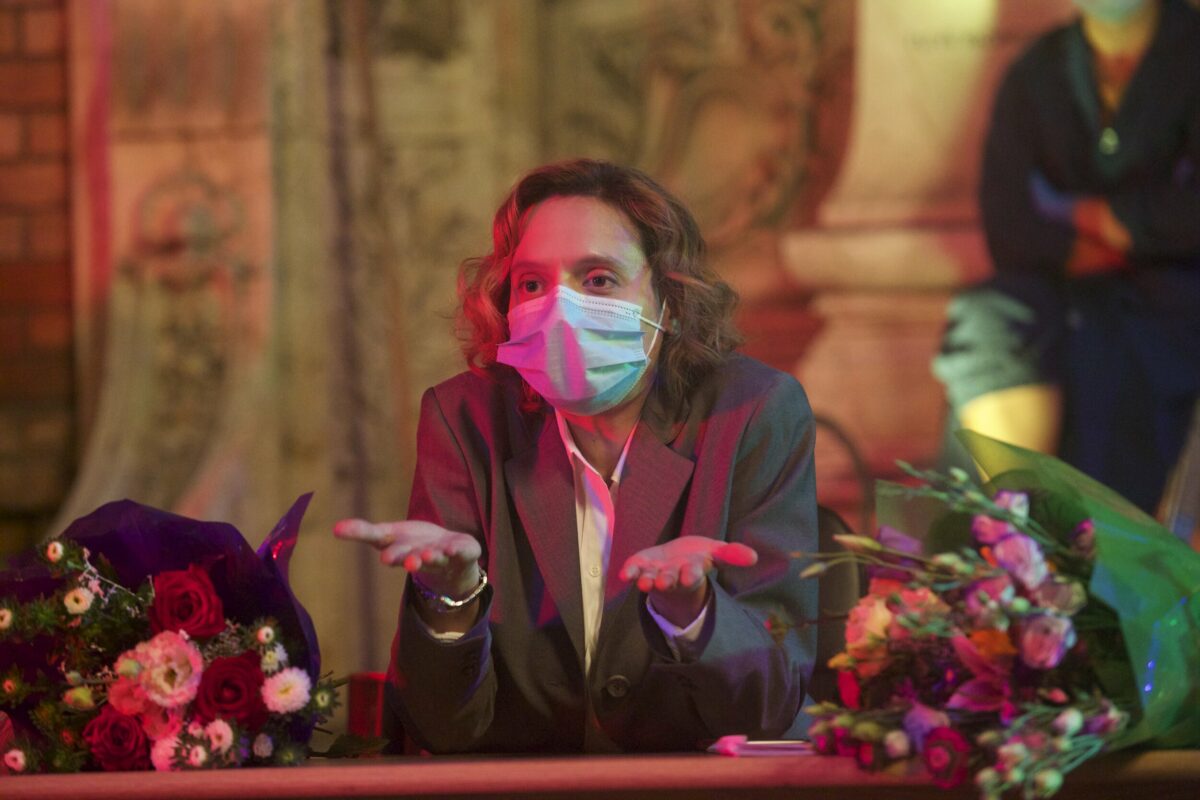 Jude has made Bucharest one of the characters in the film as Emi traverses the city. Buses and trolleys pass, many of the businesses are boarded up and empty due to the pandemic, masking is clearly mandatory for indoor spaces like the grocery store where Emi buys her supplies and the pharmacy where she tries to buy Xanax over the counter to calm her nerves. The city walls are pasted over with decaying posters, and contact with passers-by is non-existent. For most of her life she’s just an ordinary woman leading an ordinary life in an ordinary town. Except for the porn (and maybe it’s not so exceptional), she could be you or me or anyone you know (or think you know).

Act Two is Jude’s paean to absurdist comedy as he takes us on an anecdotal ride through Romanian and world history. Clips of Romania’s participation in the two world wars, their embrace of Hitler until they were sure he’d lose, at which point they joined the allies, the Ceausescu years, and the revolution against him, and many other conflicted moments are shown. He gleefully inserts intimate body parts, in isolation, just to wake us up and perhaps to remind us that they are an integral part of  everyday life, even if the presentation is a bit more direct than most of us acknowledge in the dark. It’s not all meant to make sense but most of it heightens the absurdities of life. When a clip of transformer robotic toys is shown, a chyron appears with the following quote: “An officer who fought in the Middle East is worried that robotic warfare will remove human empathy from armed conflict.” By the end of this act, you will find yourself amusedly disoriented and ready for the third and meatiest act.

Act Three: Is there a right to privacy? Is what one does in a private, supposedly secured environment away from the public eye protected? This will be the crux of the kangaroo court held to determine whether Emi, an excellent teacher, should be fired from her job at the school. Her tape was placed on a private, adults-only platform and immediately taken down when she discovered it had been leaked and seen by some of her students and their parents. Do not the guardians have some responsibility in monitoring the activity of their own children and keep them off “adults only” platforms? The vitriol spewed by the parents becomes tribal as their horrific prejudices come to the fore. Their Fascism, anti-Semitism, hatred of gypsies, accusations that Emi is teaching about the Holocaust, which some believe is overrated, and not enough about St. Stephen the 15th Century warrior king and Eminescu, the revered Romanian poet. When she points out that Eminescu also wrote erotic poetry, the parents are outraged. Losing her temper, she illustrates the duplicity and illegal actions of her biggest enemy in the group resulting in a cat fight. 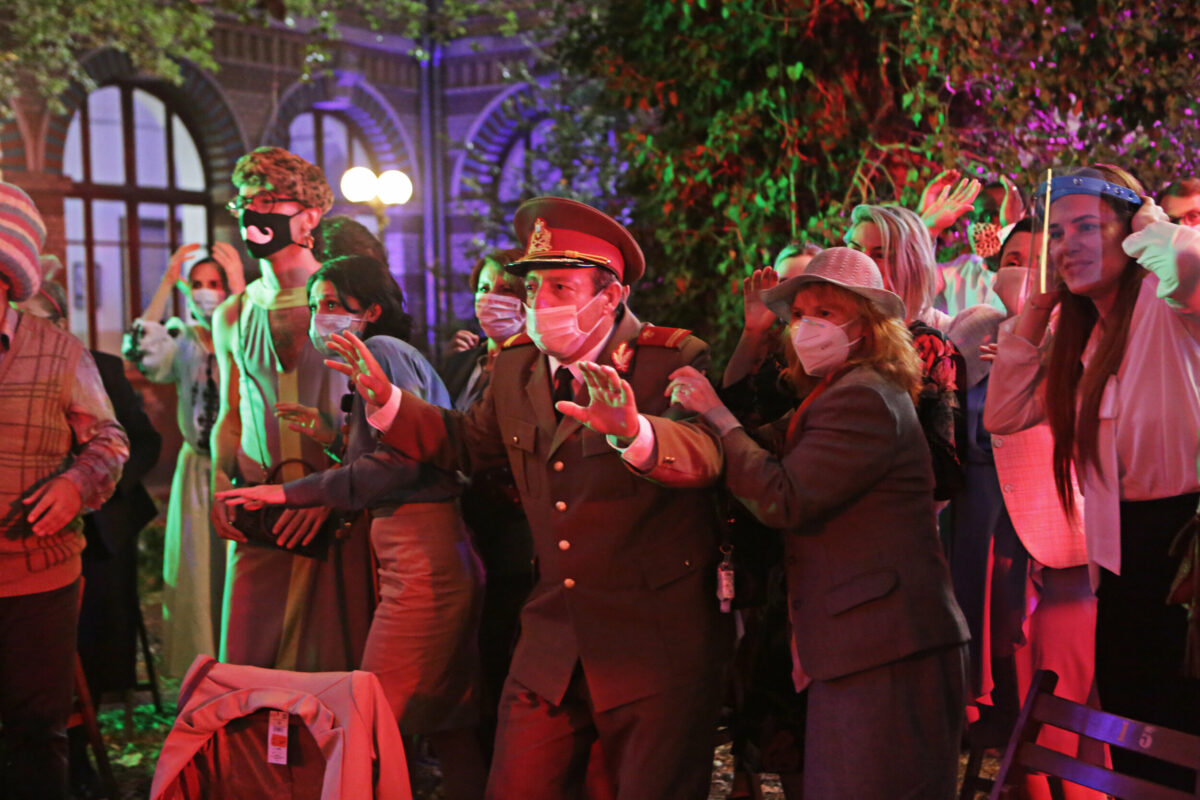 Jude gives us an epilogue of three endings, each stacked a different way. But the real issue is private rights of the individual away from the public arena in an era of hatred, hypocrisy, conspiracy theories, and intolerance. Is her lack of common sense and foresight less grounds for retribution than the intolerance and hatred of that which permeates the everyday life of the parents who stand in judgement of her? I guess not. In the case against pornography, it is obscenity that wins.

Katia Pascariu gives us an Emi who travels from unbridled sex goddess, to ordinary woman, to freedom fighter. Traveling the road from profane to mundane and back again with convincing flair, she is everywoman, extraordinary and ordinary by turns.

Olimpia Malai as Emi’s nemesis is effectively odious. Also notable is Nicodim Ungureanu as the army officer who takes offense at anything reflecting badly on Romanian history as he hilariously veers from defending the Fascism of the war, the Communism that followed, the continued Anti-Semitism and persecution of the Roma, and the righteousness of those who denigrate Emi. One of my favorite quotes (and there are many) is the interaction between the school priest who doesn’t want her indoctrinating the children about the Holocaust and one of the parents. Agreeing with the priest, he says, “Thank you, Father Bârsescu! Porn Teacher here indoctrinates kids about the Holocaust, with lies about Romanians killing kikes and crows!” (“Crows” is a pejorative for Gypsies.)

Jude’s film is Romania’s submission to the International category for the Oscars. The judges are known to be among the oldest of the Academy and whether they will be able to get past the first three minutes is a big question. I would hope so because “Bad Luck Banging or Loony Porn” is a brilliant satire of prejudice and hypocrisy as practiced everywhere. Very few films ever lead to the kind of discussion that this one puts forth. How would you react if this was your child’s teacher? Who has rights and do they matter? And what has been the effect of the tribalism brought to the forefront by autocratic governments (our previous one included) on rational discourse? This is a fabulous, troubling, provocative and unique film.

In Romanian with English subtitles.

Opening November 26 at the Nuart Theatre.