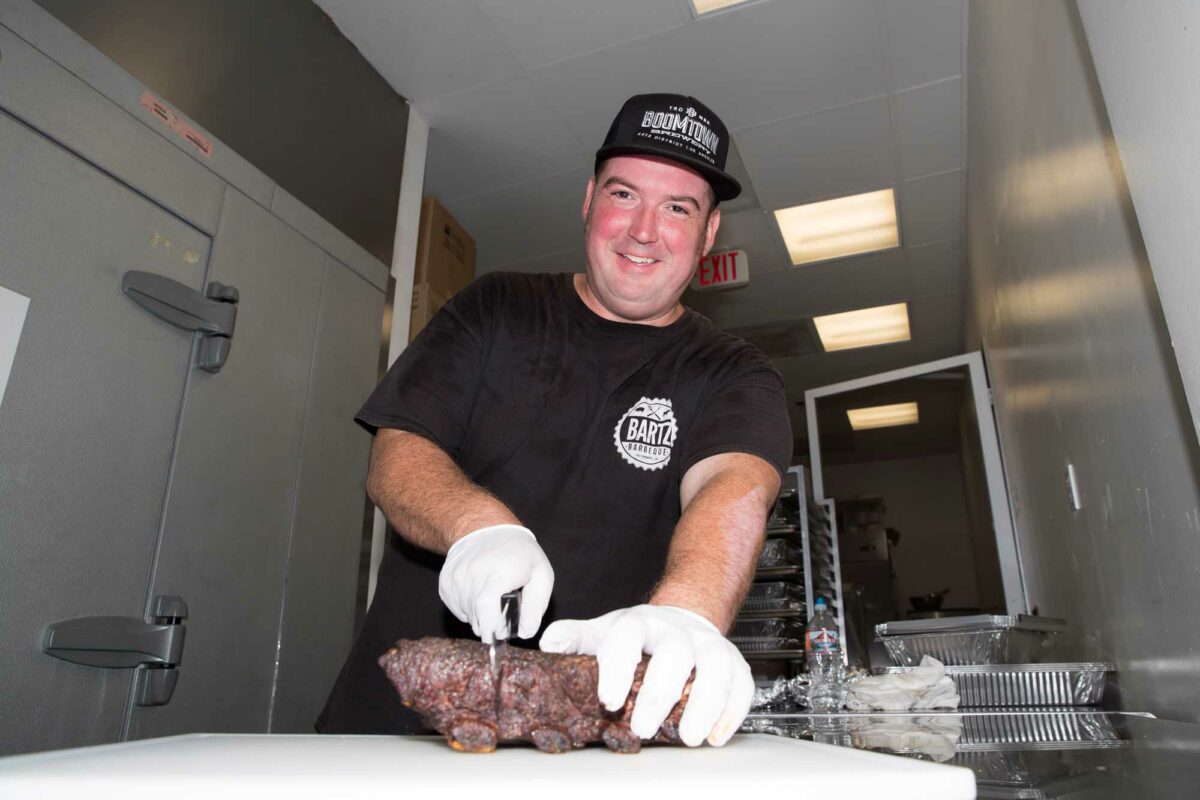 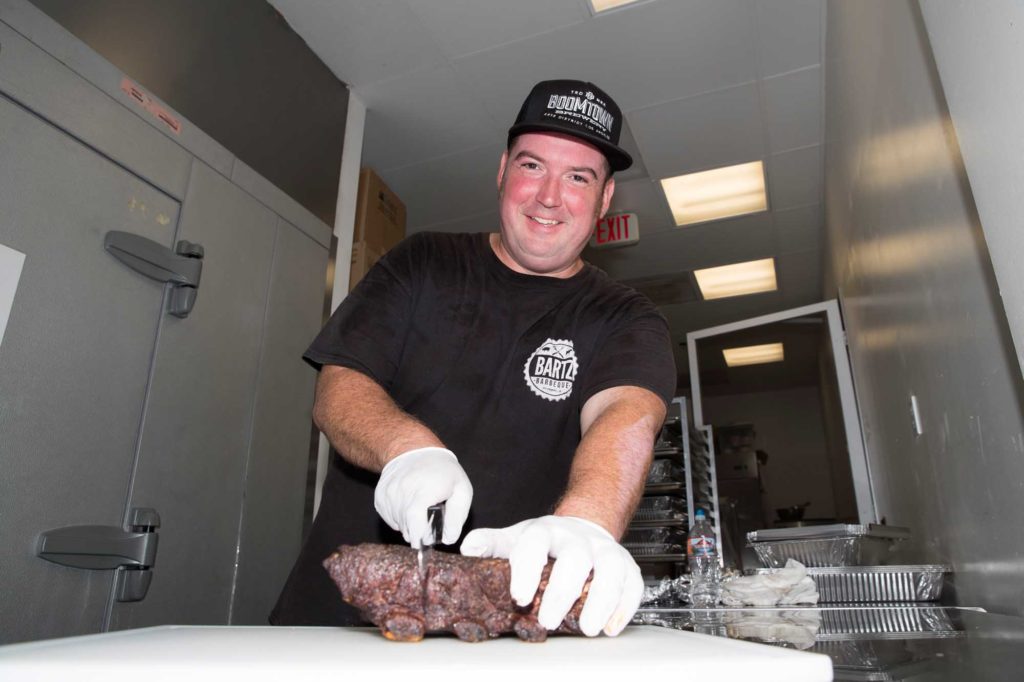 Dustin Bartz wasn’t a particularly avid barbecue fan when he left the South Bay for Texas for his job as a security camera distributor. As he remembers it, “I went to Austin in 2007 and stayed for three years, and that’s where I learned what barbecue was supposed to taste like. When I came back and there weren’t any places to compare with what we had in Texas, I bought a smoker.

“I lived in Hermosa and didn’t have a place to put it, but my buddy who lived nearby had a backyard so we put it there and started cooking. It weighed 1,500 pounds so moving it wasn’t trivial. I moved again and it’s at my house now. Over the course of three or four years, my friends started offering to pay for the food I made, so I decided to turn it into a business. It didn’t start as one, just as a way to get food that I couldn’t find anywhere else.”

Now barbecue is at the center of Bartz’s world as he travels from brewery to brewery hauling a smoker weighing half a ton, plus wood, hundreds of pounds of meat, tables, and all the paraphernalia of a mobile food stand.

I showed up early to watch him set up for business outside Absolution Brewing’s tasting room. His pickup truck was loaded with coolers, insulated cabinets, and less identifiable objects. The trailer it towed held even more stuff, neatly sandwiched around a squat smoker with a short chimney. Two large men wearing jeans and matching black shirts and hats hopped out of the truck and went to work with the efficiency of a practiced team. Dustin Bartz and helper Roger Castro proceeded to do the following:

“After hearing people say ‘Hey, you should be selling this’, I spent another year trying to figure out how to do it legally, because I didn’t want to be a fly-by-night operation. I had to learn the health code laws, all of that. I also had to work out transporting everything. I was afraid the truck would be top-heavy and the whole thing would capsize going around a corner,” Bartz said.

Though Dustin has the smoker with him, the meat that’s cooking today won’t be served until tomorrow.

“Smoking is a two-stage process – you smoke the meat with wood and then bring the heat up with charcoal. The Austin style is to smoke with white oak, though I sometimes use red oak when I can’t get white oak. You cook with wood for eight or nine hours to infuse smoke flavor, and after that, you’re keeping it warm to finish it and break down the muscle fibers. I have a computer-controlled, gravity-fed smoker so I can control the temperature and smoke level. It turns the smoker into an oven when needed, and it makes it way easier.”

The meat that will be served today came off the smoker this morning and arrives in an insulated box. This not only doesn’t degrade the result, Dustin says it improves it.

“Even after the time to transport it to wherever it’s being served, I often have to pull it out almost an hour before I serve it so it’s cool enough to slice. It’s actually better for the time in that sealed, hot container because staying at medium heat and cooling very slowly makes it exceptionally tender.”

“The meat has a rub of salt and pepper. That’s it, nothing else. Sometimes I do pork ribs and I’ll add paprika, onion, and garlic, but for my beef, pulled pork, and chicken we keep it simple. You have to sauce pork ribs, and I have sauce for people who feel like they need it, but that’s not the way they do it in central Texas. They sauce it everywhere else I’ve ever been, but not there.

“There is a variety of sauces depending on where you are. Some have a thick vinegar base, like Kansas City, or a thin sauce in Virginia and sweeter sauces in the Deep South. But at least they smoke the meat properly before they add it. Here in Los Angeles, most places don’t cook it right. They give it barely any smoke and then pour sauce on it. There are a few around here that do a good job, like that Hop Saint place – it’s a restaurant that serves barbecue rather than a barbecue joint, but that’s about the only place around here where I actually order barbecue.

“I don’t have any plans to open a restaurant, because I am perfectly happy doing this, going between breweries. My goal is to get consistent days at four or five places, so I’m always at the same place at the same time. Places in Austin open up at maybe 11 a.m., and when they’re sold out for the day they close. If I had a restaurant I could make money selling other stuff, drinks and sides and such, but I’d have all the hassle of making that stuff, running inventory, dealing with staff, and all that. I’ll admit that a restaurant seems a good idea when it’s raining, but it doesn’t do that very often here.” 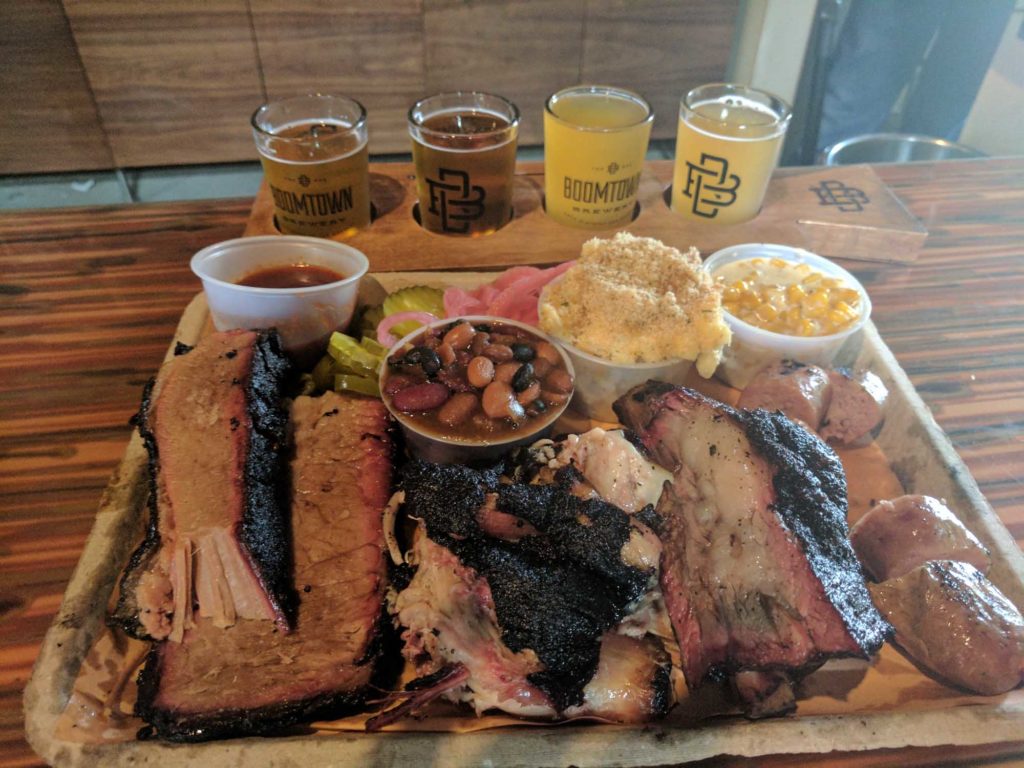 “I’m getting calls from places in Los Angeles that would like me to come up there, but I’m happier just staying in the South Bay. Last month we showed up at 30 different breweries – I sometimes schedule three different places the same day, and on one day I did five. I had two crews working… that got crazy and it didn’t make sense. This month I’m taking it back to one event each day.”

My companion and I get a beef rib, pulled pork, and brisket, along with creamed corn, beans, and mac and cheese. Everything is served in Styrofoam containers, and we head into the brewery to get a table and pints of beer. The pulled pork is so tender it practically melts, and the brisket has a crust (called bark by barbecue fanatics) that has the sweetness of caramelized fat. Underneath that is juicy, smoky meat that is incredibly good. Nevertheless, it’s the beef rib that stands out; it’s the best I can remember ever eating. The richness reminds you that this is prime rib meat, the cut prized for both tenderness and flavor even when cooked less adroitly than this. My companion is an amateur barbecue guy himself who has entered competitions. He is in a state of bliss as we share the meal.

It took just over 35 minutes from arrival to serving the first plate of ‘que. Then Bartz took the time to greet regulars and chat with the staff at Absolution Brewing. He had a few minutes to rest for before going to Redondo Beach Brewing to do the whole thing again — hopefully minus the part about chasing his tent.

You can find where Bartz BBQ will be setting up their stand at bartzbarbecue.com.