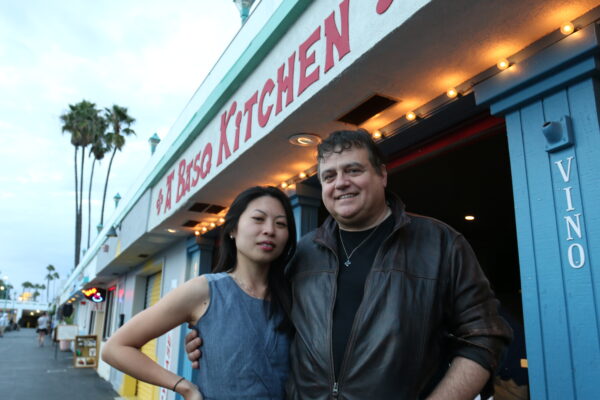 Jessica Lo Ibarra and Chef Bernard Ibarra at their restaurant, A Basq Kitchen, which will reopen Thursday after a regulatory miscue caused a temporary closure. Photo by Mark McDermott

The moment is a nightmare for any restaurant owner: the sudden arrival of an officer from the Department of Environmental Health bearing a shutdown order. What had been a bustling enterprise goes silent in an instant and the owners start to scramble to fix whatever violation had been identified, usually a problem with sanitation. While they struggle to fix the situation a sign posted outside acts as a scarlet letter, notifying the public of the closure and damaging the reputation of the establishment.

The fear of that scenario is a strong motivator for restaurant owners, and closures are rare. The system usually works well, but in the rare times when it doesn’t an innocent business suffers. One such case occurred on September 23, when one of the most exciting new restaurants in Redondo was suddenly shuttered.

The reason A Basq Kitchen was closed? Failure to file plans for kitchen remodeling.

The problem was that no remodeling had occurred, or was scheduled to take place. There had been cosmetic touch-ups and repainting in the customer area when A Basq Kitchen took over from Gambrinus earlier this year, but that was all. The business operated continuously throughout the transition and earned an A grade on its initial inspection. Then a paperwork error in the Health Department’s office caused an inspector to treat A Basq Kitchen as a new business rather than an existing one, triggering a traumatic chain of events.

“They closed us on Wednesday, and I went to try to work it out on Thursday, but I was a bit shell-shocked,” said Jessica Lo Ibarra, who owns the restaurant with her husband Bernard, who is also the executive chef at Terranea Resort. “Bernard and I both have full-time jobs, and it’s not like we could just turn on a dime and knock out an appeal letter. I think it was a miscommunication. Somebody on their end classified us as a new restaurant rather than a transfer, with our kitchen permits grandfathered in.”

The Ibarras were blindsided by this turn of events, and had to prioritize their response.

“Imagine someone just shutting you down – what do you do?” Jessica Ibarra said. “There’s some internal processing that goes on there. The first thing you do is take care of the employees – if we couldn’t give them work that weekend then we had to set them free to find other jobs. They were relying on us for a living, and we didn‘t know how soon we’d be back in business. It was out of our control.”

Ibarra was generous about the Department’s response to their situation.

“We had to get the facts and documentation together, and once we sent that out on Monday they responded on Tuesday,” she said.  “As soon as they got our appeal letter, they cleared everything up and reversed the decision.”

The restaurant will officially reopen Thursday. But reopening A Basq Kitchen wasn’t as easy as shutting it down, and Ibarra said that they still haven’t completely assessed the damage.

“We haven’t added up all the perishables we had to throw out, the loss of business – it was thousands,” she said. “We were confident we’d reopen but didn’t know how soon, so we lost a lot of staff, and of course we have been still paying rent on the place while it was closed.”

It was a blow to a restaurant that made a big bet on the International Boardwalk’s revitalization, though Bernard Ibarra admitted that his decision to open there had been based on more than a cold business choice. He was drawn to the area because it reminded him of the coastal towns of the Basque region, which straddles the Spanish and French border along the Atlantic coast.

“I really wanted to be on the boardwalk or pier because it reminds me of the old quarter of San Sebastian, the Parte Vieja that is right next to the harbor,” he said. “That sea breeze that you can smell and taste when you lick your lips, the simplicity of the restaurants, that makes you feel you are part of the history and culture of the place. I only looked in this area and didn’t want to be anywhere else.”

If you have been to other Basque restaurants in California you probably have expectations of a traditional country inn experience, featuring family-style dining with huge portions. Bernard explained that the style of service at A Basq Kitchen is more like another type of Spanish cooking.

“What we are offering is the bar food of San Sebastian, Bilbao, and Pamplona. You order small plates, and the whole bar is covered with bite-size food. It is similar to tapas, to bruschetta, but called pintxos, which means spike – it is because the meats, seafood, and other items are held on slices of bread with a toothpick. The Basques would call this a pintxos bar.”

A Basq Kitchen is the only Basque restaurant in greater Los Angeles – their closest competitors are near Pomona and in Bakersfield. They have quickly become a center for both the small expatriate community and for travelers who experienced the cuisine and want it again.  Ibarra regards himself as a cultural ambassador, and wants to promote some of the more arcane items he serves.

“I think only thirty percent of our customers are completely new to Basque food – some of those I have to explain where the Basque country is,” he said. “If they seem adventurous I’ll go for the jugular – tell them they need to try squid in its own ink, or the beef cheeks. I don’t go slow with them – I want them to taste how different our food is, how good it is. I do plan on expanding the menu – right now I have three or four items on the specials board every day, I would like to expand that to six or seven. The menu is a guideline, the specials board is what is in season, what we want to highlight.”

Since they received their official notice that they could reopen, the Ibarras have been putting every spare moment into contacting staff, provisioning, and a thousand other details needed to get ready. As Jessica Ibarra put it, “The restaurant is like a child, it demands a lot of attention and needs a lot of love. We’re lucky we have a staff to help us –parents don’t have that advantage. The best thing we can do is get back on our feet and keep going.”