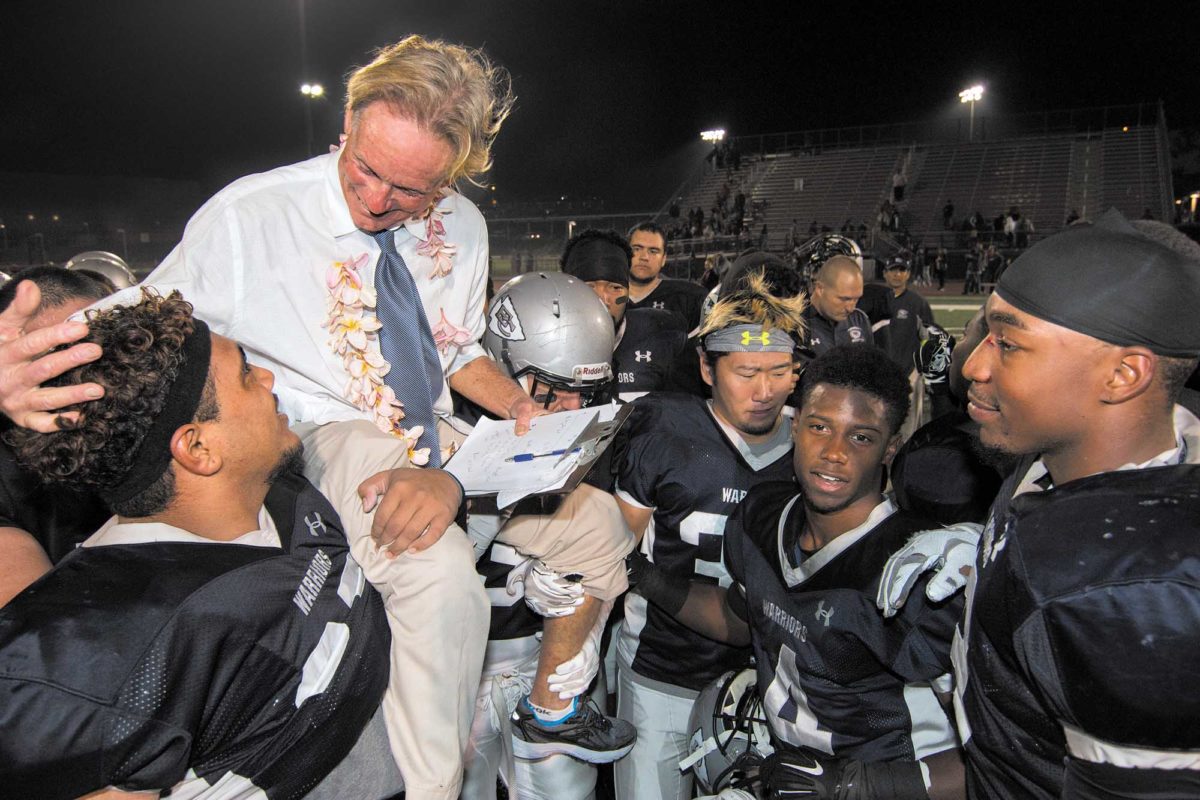 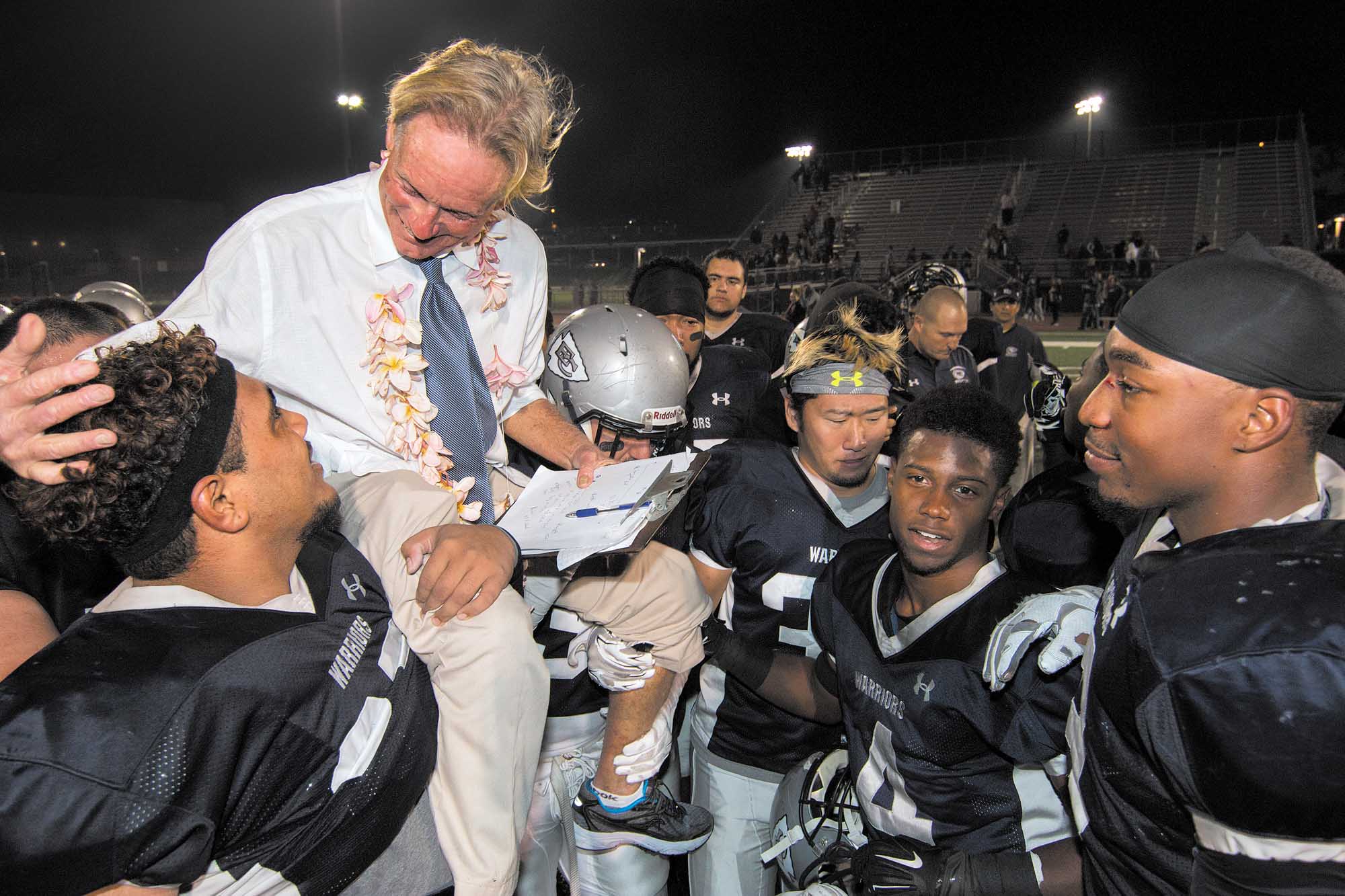 John Featherstone had an unusual feeling as he stood on the sidelines of a Redondo and West Torrance battle in the CIF-Southern Section Western Division football playoffs four years ago. During the previous 50 years, he had attended countless high school football games. That night,  he was still getting accustomed to surveying the action from a new viewpoint — as a fan.

The former gridiron star and coach had recently announced his retirement after 31 years as head coach of El Camino College’s football program.

“It is strange,” Featherstone said. “It will take some time getting used to. Old habits are hard to break.”

Featherstone coached his final college football game on Saturday, Nov. 14, 2015 at Redondo Union High School, where his players came up just a little short of their goal to win one last game for their admired coach. Trailing 38-23 heading into the fourth quarter, El Camino rallied to lose 38-36 to Long Beach City College, the top-ranked team in Southern California’s National Division.

The game was played at Redondo because El Camino’s Murdock Stadium had been torn down to make way for a new, $48 million 7,869 seat stadium and athletic facility. The original stadium was built in 1949 and named after the college’s founding president Forest G. Murdock.

At the Warrior’s Nov. 16 homecoming football game, the new stadium’s field will be named Featherstone Field during during a ceremony prior to the coin toss.

Coach Feather, as he is affectionately known, finished his coaching career at El Camino with a record of 214-119-1, including three national championship game appearances and a national title in 1987. His teams also captured two state titles and 11 conference championships. They appeared in 19 bowl games and reached the playoffs five straight years, from 2004 to 2008. He was inducted into the El Camino College Athletic Hall of Fame in 2005.

During his final game’s halftime, Featherstone took the microphone and acknowledged his coaches — past and present.

“The reason we coach is for our football players. Our goal is to see they get to the next level academically,” Featherstone said. “We work them hard academically and when they step on the football field during the week, they work hard. That’s what life is all about.”

“I am proud to have known Coach Featherstone since our elementary school days when I had to attempt to tackle him on the playgrounds of Manhattan Beach,” said Bill Beverly, a member of the El Camino Community College District Board of Trustees. “He has touched thousands of lives and presided over the building of innumerable young players into better students, athletes and men. John represents all that is best of El Camino College.”

Keith Ellison, a standout player at Redondo Union High School, has known Featherstone since he was an 8-year-old watching his older brother Chris play for El Camino before transferring to BYU.

Keith followed in his brother’s footsteps, playing linebacker for Featherstone prior to two successful seasons at Oregon State University and an NFL career with the Buffalo Bills.

“There are no words that can describe what Coach Feather has done for athletics in the South Bay. He is a great coach and has given opportunities to many players with a variety of backgrounds,” Ellison said. “He has the right touch with players and I’ve never seen him in a bad mood. His positive attitude rubs off on everyone around him.”

“Feather is a great alumnus of Mira Costa,” Morrow said. “He has helped me a great deal over the years, especially with ideas in the passing game.. He is a true legend in South Bay football.” 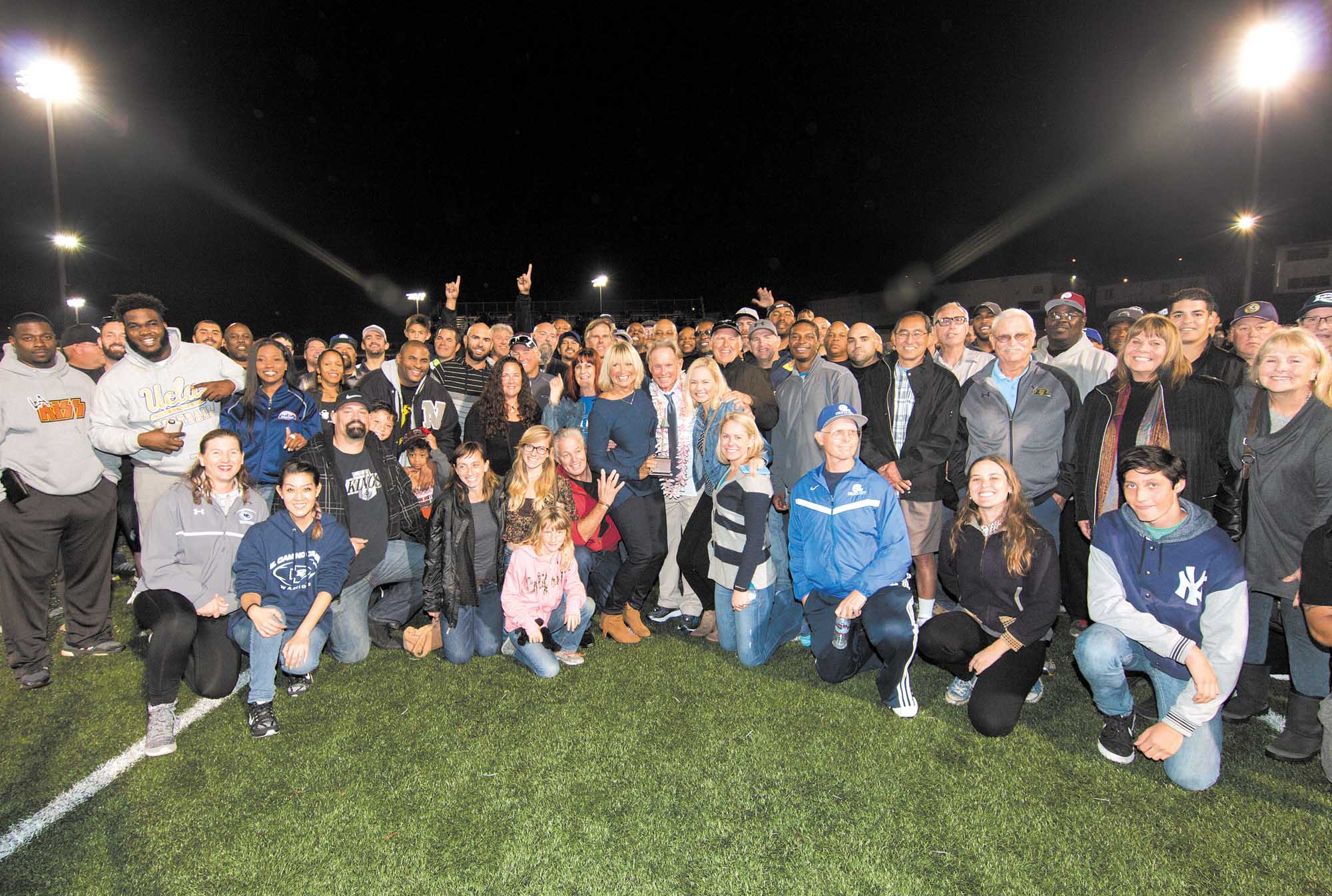 John Featherstone, with family and friends in December 2015, following his final appearance as head coach of the El Camino Warriors. Photo

Featherstone grew up across the street from Live Oak Park on 21st Street in Manhattan Beach. He and his older brother Fred spent countless hours playing baseball in dirt lots, catching footballs and making tackles on the grassy fields of Live Oak Park, running and jumping in the soft sands of beach volleyball courts and surfing the best waves in the South Bay.

At Mira Costa, Featherstone excelled in track and field, baseball and volleyball. “Sometimes during the baseball season, I would leave in between innings and go over to the track to run in a relay event or compete in the long jump, then return to the diamond,” he recalled

In 1866, because volleyball was more than a decade away from becoming a CIF sanctioned sport, Featherstone and a few friends founded the Mira Costa Volleyball Club.. “We weren’t very good, but we sure had a lot of fun,” Featherstone said.

But Featherstone’s true calling was on the gridiron. He played quarterback, running back and wide receiver at Mira Costa. In 1967, he earned All-CIF honors as a wide receiver.

Featherstone’s knowledge of the game and strong work ethic made an impression on his head coach that would lead to a life-long friendship.

“When I played at SDSU in 1970, it was the first year that college football went to single digit numbers on uniforms,” Featherstone said. “I was the smallest guy on the team. Coach Coryell asked me how I felt about wearing number 1. I said, ‘Hey, I‘m just happy to wear the uniform.’ The lockers in the stadium were in numerical order, so mine was the first one in line, next to the coach’s office. Coryell never dressed in the office. He wanted to be close to his players, so he would hang up his red coat and get dressed in my cubicle. He was very superstitious. Even on road games, he would dress in my locker, so we formed a tight bond.”

The highlight of his college playing career, he recalled was during SDSU’s 1969 division championship game at the Pasadena Bowl in front of 52,000 fans.

“I had a dream the night before the game about playing in Pasadena and having a good game,” Featherstone recalled. “Our star receiver, Tommy Reynolds was injured and our second-string receiver pulled a hamstring in warm ups, so I was thrust into the starting role.”

Featherstone scored two touchdowns in the Aztecs’ win and was selected as the game’s Most Valuable Player. 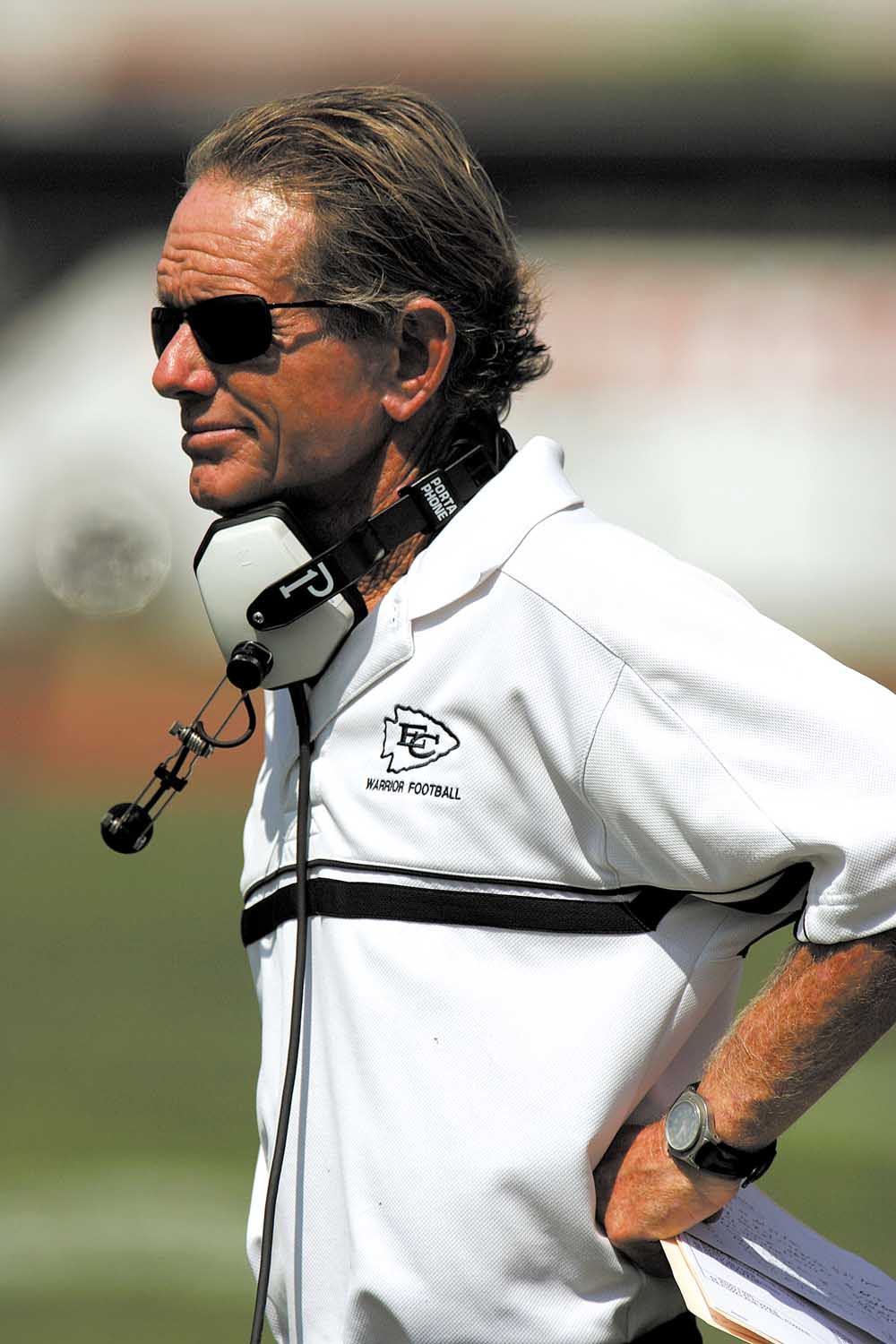 In 1971, after receiving journalism and physical education degrees In 1970, Featherstone began his coaching career as the Aztec’s wide receivers coach.

Featherstone earned his master’s degree in physical education from SDSU in 1973 and over the next four years, served as quarterback and wide receiver coach for Grossmont College, helping the Griffins win a state championship in 1974.

“I was so excited to return to El Camino,” Featherstone said. “We had two good seasons when I played for the Warriors under Ken Swearingen, who was another great influence to me. I’ve been very fortunate to have been associated with good teams, especially good quarterbacks.

“When you look at our offense, we averaged more than 20 points per game in my tenure.” “Playing junior college football is the last time these guys can play for fun,” Featherstone said. “I tell the players to approach each game as if it’s your last, stay focused and have fun. Football is not a game for sissies. It’s a violent game and we’re part of a chosen few who get to play at this level. It’s a privilege.”

Featherstone has a credo that he not only used on the field, but also in the classroom. “Dream Prepare Endure Achieve. If the first three pieces of the puzzle fit, you will achieve.”

Although a high-energy coach, Featherstone did not believe in using whistles on the practice field, nor did he believe in cussing. “If we have to yell and scream, it’s done during the week, never during the game. We make the correction, and then give them positive reinforcement.”

“We got a lot of kids who haven’t had a lot of love and discipline. One of the highlights of coaching was watching these kids grow up to be men and productive, successful citizens.”

“I looked for overachievers. Team guys with discipline and the attitude to work hard in all phases of their lives. The only promises we gave our recruits was that if you come to ECC and stay out of trouble and become a good role model to your younger brothers and sisters, work hard in the weight room and on the practice field and play hard between the lines on Saturday night, we will take care of you for the rest of your lives. We wrote letters, made calls, whatever it took for our players to get to the next level. ”