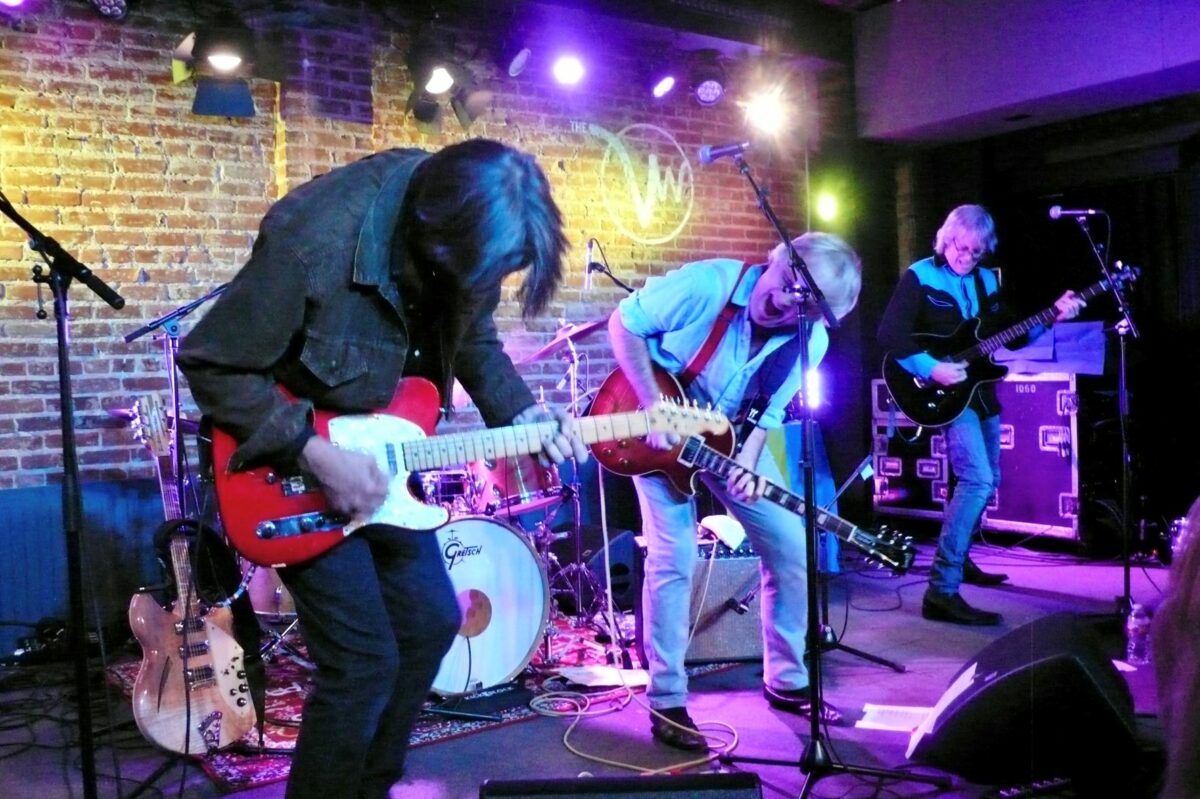 The Long Ryders, who are credited with popularizing American music, during a performance on election night at The Venice West. Photos by Garrick Rawlings

Fans of the BeachLife festivals in Redondo Beach and the now sadly closed Saint Rocke in Hermosa Beach would be wise to travel north up PCH to The Venice West, less than 12 miles from the ol’ Rocke on the same State Route 1. The reason for this is veteran South Bay live music entrepreneurs Allen Sanford, and Rob Lissner, who built and own all these endeavors. Their dedication to quality and musical diversity of both touring and local artists remains and thrives at Venice West, which opened just over a year ago.

Zac Garfinkle, is the talent buyer, and Jenn Tomich is the manager. Garfinkle lives nearby and met Sandord and Lissner shortly before the club opened.

“We all have very diverse tastes in music, and Venice is diverse. So part of our mission statement is to bring music to everyone in Venice. There is so much talent out there, amazing up-and-coming artists, hyper local artists, and tons of legendary artists who are hitting the road. There are also incredible comedians, DJ’s, reggae, jam bands, hip hop, rock, indie rock, alternative, tons of Latin; it’s a mixture of all that. We get tons of customer feedback, and I think unlike other venues we actually take that into heavy consideration. We curate to what does the community want to see?”

In a great stroke of luck for this assignment, on the night I visited, the legendary American rock and roll band The Long Ryders were in town. They are just beginning to tour again. They stepped off of the five-day  Outlaw Country West Cruise from LA to Cabo and back the morning of the show.  The Long Ryders (LR) are credited with inventing the “Americana’ genre a decade before anyone called it that. They formed in LA in 1981, and started out as a Ramones influenced garage rock punk band. Then they integrated the Bakersfield sound, a la Merle Haggard, the 12-string jangle of The Byrds, and the cosmic cowboy country rock of Gram Parsons/Flying Burrito Brothers into their own unique blend of truly original American Music, with a whole band of songwriters. They were the most rocking of the Paisley underground scene era.

The LR fell apart in 1987 after quite nearly cracking the big time. Sporadic reunions occurred over the years until they reformed in 2003, which led to their first new release in over 30 years, 2019’s appropriately titled Psychedelic Country Soul. Sadly, in January 2021, their long-standing bass player Tom Stevens died at his Elkhart, Indiana home. For this tour the LR brought in their good friend Murry Hammond (Rhett Miller’s partner in the great Texas band The Old 97’s)  to play bass, aperfect fit. 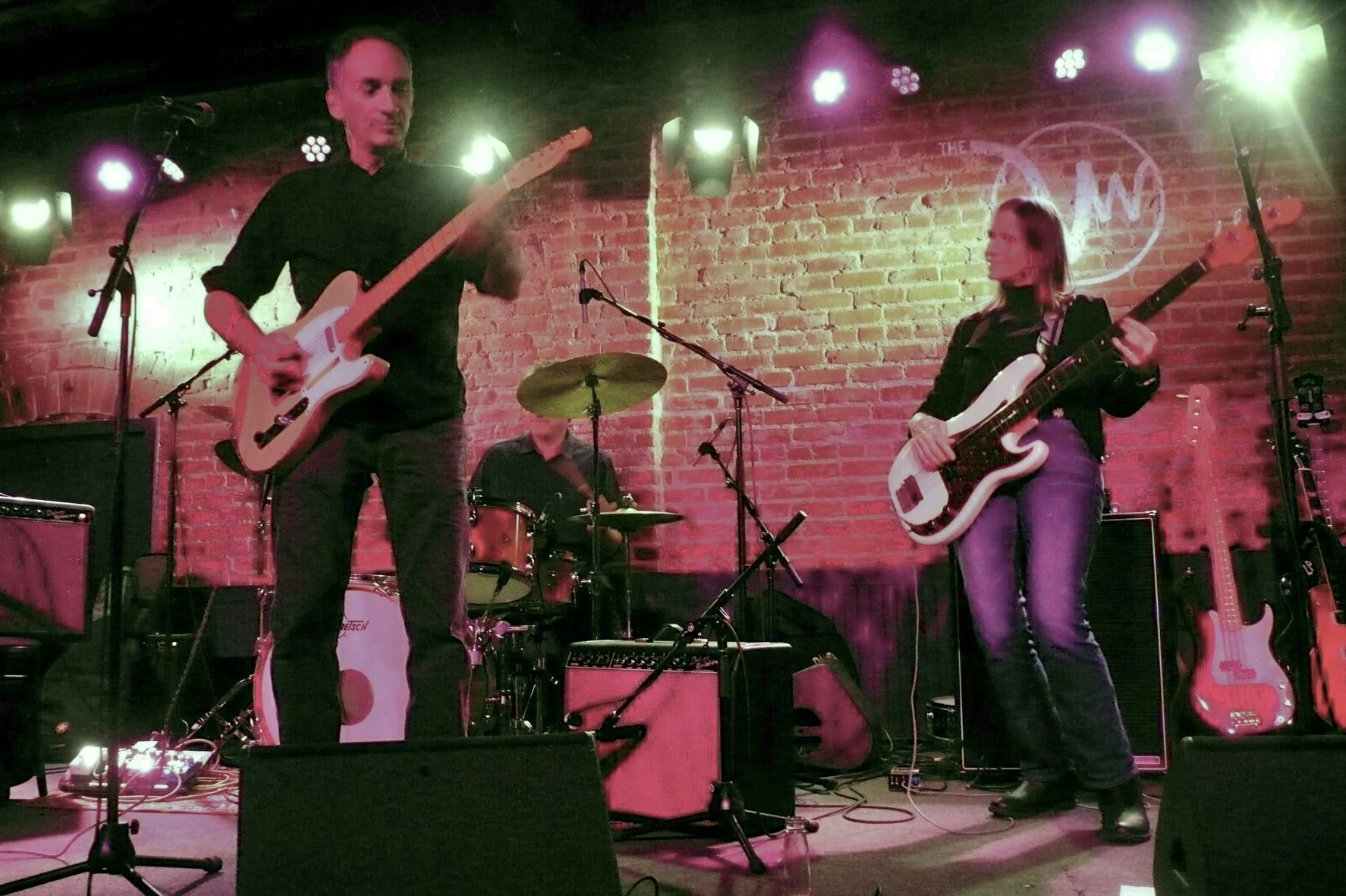 Ben Vaughn, who opened for The Long Ryders, said he had forgotten how much he liked the band.

The LR took The Venice West (TVW) stage on full-throttle, tearing into “Tell it to the Judge on Sunday,” from their classic 1984 album Native Sons. No evidence of sea legs on this rainy night in Venice. Sid Griffin (guitar/vocals), Stephen McCarthy (guitar/vocals), and Greg Sowders (drums)  have been together from the beginning. It was a love affair on stage and with the audience, a perfect distraction on the freakish election night. The set was peppered with songs from all points in their career, including an in-between song tribute to their fallen comrade, Tom Stevens by leader Griffin, who spoke some very kind words, and then led the crowd in chanting Tom! Tom! Tom!

Legendary rock musician/photographer Henry Diltz was there shooting and dancing. I felt honored to be rubbing shoulders with this luminary. He is a kind and friendly man. It was lovely and affirming to see his youthful passion for great music.

TVW is an intimate room with great site lines, and the sound was crisp, perfect for artists and the audience. It was fun to watch Griffin and McCarthy pass that beautiful blonde Rickenbacker 12-string back and forth between songs – they’re probably not doing that over at the Harry Styles gig at the Forum. It was over too soon when the show ended with their powerful anthem “Looking for Lewis and Clark” off of ’85’s State of our Union album.

I talked with Griffin briefly after the show while he was packing up the merch at the front door. He mentioned how fun the Outlaw Cruise was with members of Los Lobos sitting in with them. I was admiring Sid’s boots. They looked like some kind of real worn-out cowboy boots. Turns out, as he explained, they were real worn-out Beatle boots. He’s had ‘em for years, resoled (souled?) and heeled several times over. That they are a period correct American made copy. The guy who got them for him many moons ago was at this show. He hadn’t seen him in many years.

Drummer Greg Sowders was on the stage packing up with the rest of the band and I’m glad he did because he may have given Easy Reader a scoop. “We have a brand new record, which is called September November. We will be touring Europe next spring and then the US.”

When I mentioned I was writing for Easy Reader he said “I love the Easy Reader, there is one band member from the South Bay and that’s me.”

Sowders grew up in Atwater and moved to Manhattan as an adult.

LA institution Ben Vaughn  opened the show, a true all-around talent: writing/performing/collaborating/producing/DJ-ing and more. He’s got a bunch of wonderful albums, and songs out, and as a theme music composer you can hear his soundtrack compositions every day on TV on “That 70s Show” and “3rd Rock From The Sun.” and many other shows and films.

This night he brought Kevin Jarvis on drums who has more live and recorded credits than perhaps any other drummers in the world. Completing the trio was and 20 year LA music scene vet Teresa Cowles on bass and vocals. She is a highly in-demand live and studio musician with an impressive list of credits due to her solid, versatile bass playing and harmony vocals. Ben did his usual amazing job of taking the audience on an eclectic journey, cherry picking from his amazing repertoire — soulful rocking to cerebral wonderment and humor. If you’ve never listened to, or witnessed him, I suggest you do so very soon. Look for his mondo surf rock band The Everglades, which also includes Cowles at The Cinema Bar, in Culver City.

I caught up with Vaughn after his set. “I’m living the life of a semi-retired person, I’m not doing TV or soundtrack music any more, basically I’m playing live. I just did a tour of Spain, I’m still popular over there, which is really cool. It’s a great place to be popular. It’s been going on since the ‘80s. 1986 was the first record I put out and it did okay in America, but it did really well in Spain, and France. I started touring over there and there is still a loyal audience, and it is continuing into the next generation. When I’m playing in Spain I’m playing to a room that is under 30 and I’m like an old blues guy to them. I get recognized on the street in Madrid, it’s great, it’s really nice to have a tiny bit of fame, and to feel recognized on a small level. It’s the perfect size, and the perfect place because I don’t live there.”

“I just played in Philadelphia with my Philadelphia band whom I have been playing with for 40 years. That’s who I take to Spain with me. I have a radio show that is in syndication, The Many Moods of Ben Vaughn, and I have an album that just came out in April, on record store day, called The World of Ben Vaughn. I’m also writing and getting ready to record another album. I had a great time playing with The Long Ryders. I haven’t seen those guys since the ‘80s. I forgot how much I like those guys, and it is my first time at Venice West, it’s a cool venue.”

Before the music starts, there is happy hour every day at The Venice West,  from 6 to 7 p.m. and Garfinkle also mentioned, “We teamed up with a trivia producer and we love what she does (Clever Girl Trivia – Tuesday’s 6-8 p.m.) We started cranking that out and the locals just love it, it’s a really fun thing to do.” ER