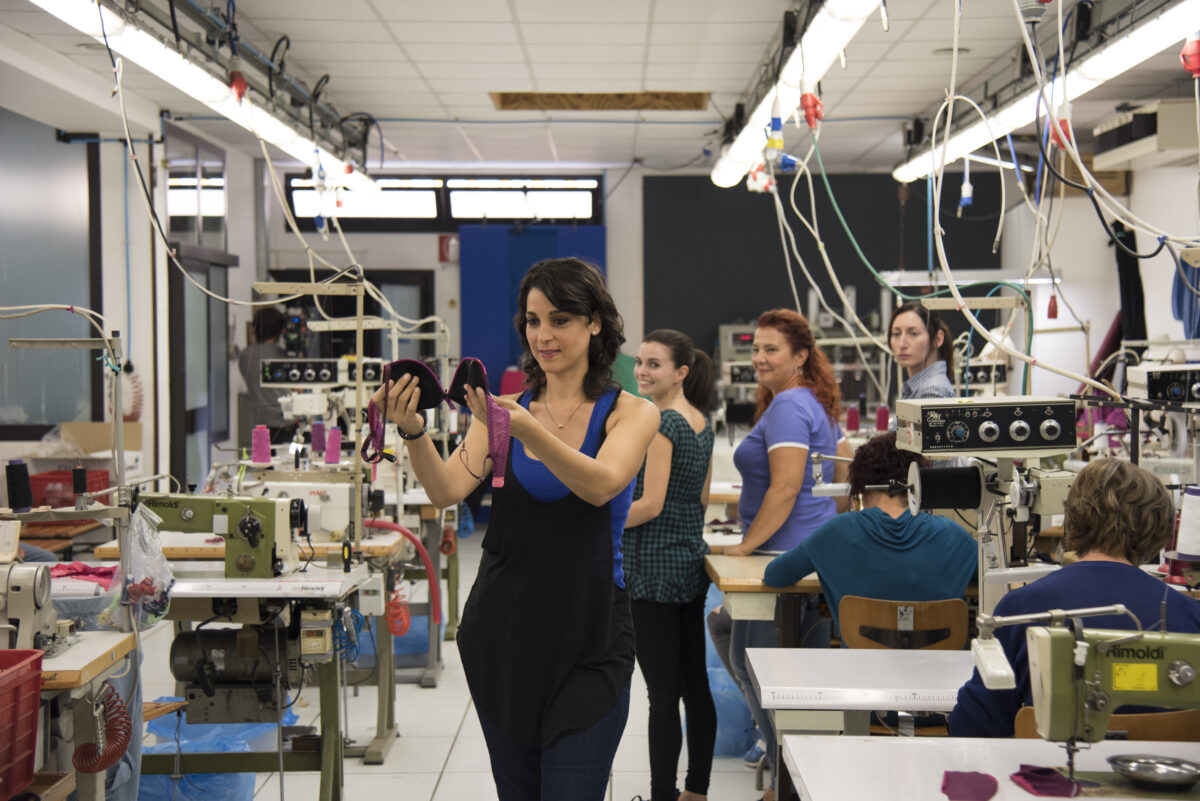 Donatella Finocchiaro as Armida in "Beate." Photo courtesy of Eskimo.

“Beate,” director Samad Zarmandili’s feature debut, is a fluffy shaggy dog story with appealing leads, an engaging story, and a fun, predictable ending. Billed as a comedy of nuns, factory workers, bras, and miracle workers it actually delivers on all of that with a dash of corrupt politicians and greedy priests to boot.

Written by Antonio Cecchi, Gianni Gatti, and Salvatore Maira, “Beate” tells the story of some intrepid women working in a factory that manufactures bras and panties. They are proud of their work and their design input and are relieved when their boss Veronica, who owns the factory with her husband, the town’s mayor, declares that these latest designs are about to be displayed in an haute couture runway show. Rumors had been flying that the factory was going to be shut down and all the work transferred abroad to save money. Surely with the success of the show, they will have job security. But no. It was subterfuge to distract them. The show was a huge success and resulted in important sales. What better time, thinks Veronica, than to move everything to Serbia and increase their profit margin.

Justifiably upset that they have been deliberately mislead, the women band together and strike against the factory. This is Italy and labor laws are tough. As long as they strike, the factory cannot be shut down and work transferred abroad.

Armida, leader of the workers, wants to be proactive. Yes, they can delay the action, but not forever. What can they do? They are fully capable of making the bras themselves and taking discarded scrap material isn’t exactly stealing.

Armida goes to visit her beloved aunt, Sister Prediletta at the Convent of the Holy Mantle for guidance. It was her aunt who named Armida after the Convent’s patron saint in hopes that a miracle will cure her niece’s club foot. St. Armida’s mummified body has resided in the chapel for more than a hundred years, tended lovingly by the nuns. Their main source of income is the shrine and the lovely lace embroidery work they do. Armida is stunned. This embroidery is exactly the finishing touch they need for their new garments to make the jump from underwear to boutique lingerie. A deal is struck.

The factory workers take shifts, some sewing and others picketing, as they begin their clandestine business. Helping them market their products is Armida’s boyfriend and factory handyman Loris. Loris is so successful at touting their product that the women must ramp things up. Breaking into the factory, they “borrow” the industrial sewing machines. Now all they need is a place to work.

At the Convent of the Holy Mantle, the very strict and humorless Mother Superior has had a stroke and young Sister Caterina has been appointed in her place. Sister Caterina, a timid mouse, finds her bite when she is informed by the Bishop and the local priest that the Convent needs some very expensive repairs and unless they can take care of the renovation within a very short time, they and their shrine will be removed to parts unknown. Sister Caterina allows Armida and the women to work at the Convent and comes to a financial arrangement with them in order to fund the renovations. She directs the nuns to assist with the embroidery. With the new factory churning out product, Sister Caterina begins the job of supervising the renovations with the money the convent is now earning. 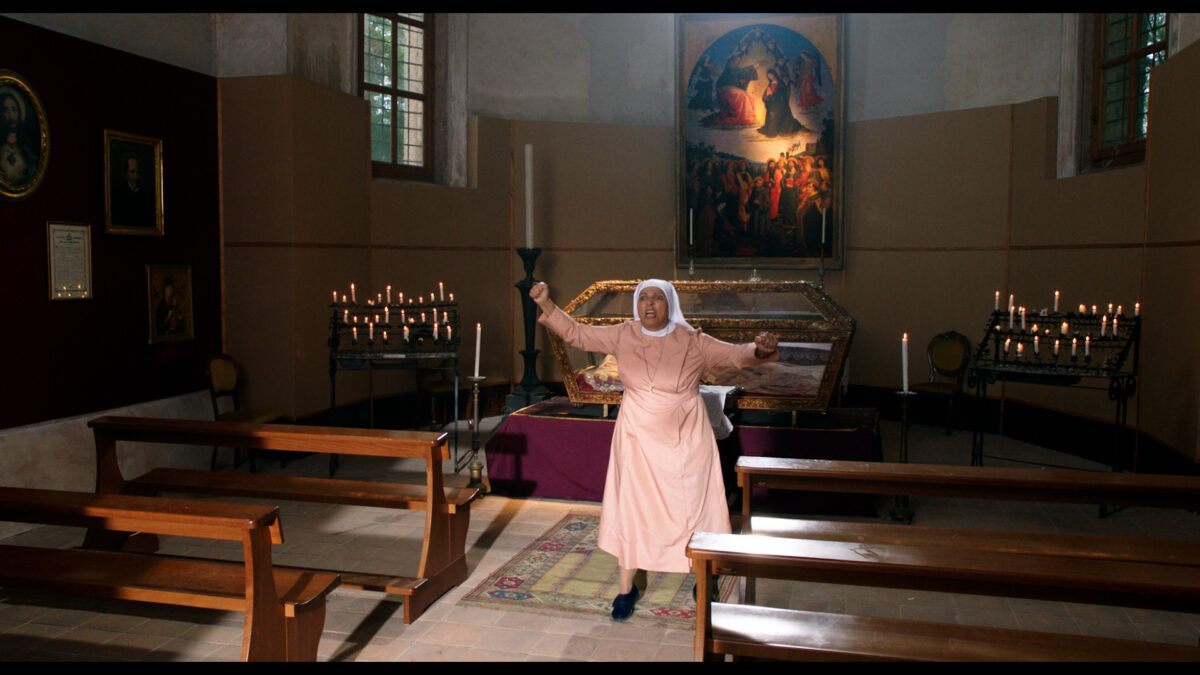 But wait…not everything is on the up and up. Sister Caterina stumbles upon the hidden plans of the Bishop. The patriarchal hierarchy of the church is not interested in repairing the convent; they want it torn down so they can profit from the Mayor’s new project – a luxury hotel on the site. Sister Caterina is determined to outwit them. She will finish the renovations and they will be unable to follow through with the resort. As if.

The women are pure of motive if not quite of deed. The church, government, and business hierarchy are duplicitous. Yes, I know, life is full of shades of gray, just not here. How will the good guys, I mean, girls, win or can they? You’ll just have to enjoy the mischief as plot points and characters careen down a slippery slope to its satisfactory ending. This is a comedy not a tragedy. It’s everything but the kitchen sink, not a kitchen sink drama.

The acting is good. No breakouts but all solid. Donatella Finocchiaro is the charismatic Armida. Felicitè Mbezelè plays Sister Prediletta as sly and unintentionally funny, the most difficult type of funny to portray effectively; and Maria Roveran as Sister Caterina grows a pair when she shoulders the burden of the convent in the absence of Mother Superior and shows much greater compassion and depth than her boss.

No, “Beate” won’t win any awards. The film is messy from structural, developmental, script, and direction standpoints. It doesn’t matter. Go with the flow, even if the flow is a bit choppy, and you’ll smile throughout.

In Italian with subtitles.