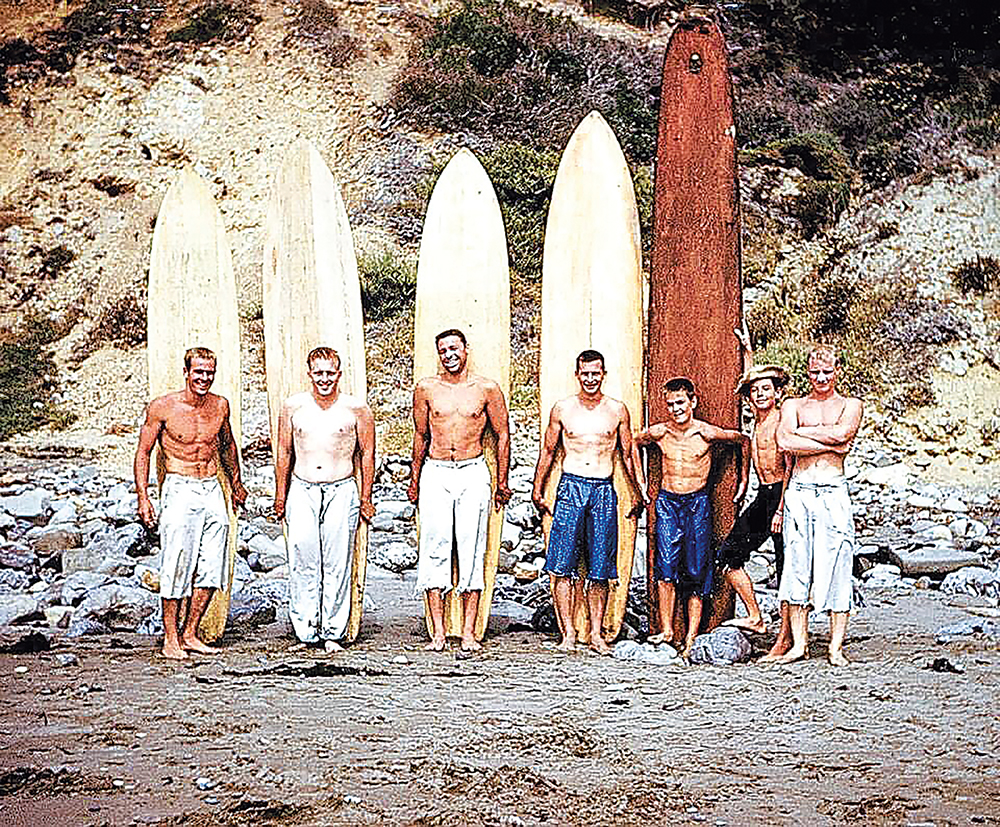 Mike Eaton (far left) and Phil Becker (in straw hat) with fellow Peninsula surfers, Eddie Clark, Ricky Burns, Richie Clark, Jared Eaton and Frankie Shinn at the end with the zinc oxide nose. The picture was taken at Bluff Cove by May Clark, Eddie’s wife, around ‘54 or ‘55, according to the Eatons’ sister Ann (Eaton) Medve. Photo courtesy of Steve Mangiagli

Phil Becker and Mike Eaton grew up on the Peninsula, across the street from one another, and retired near to one another on the Big Island of Hawaii. Between those periods, during the Gold Era of Surfing,  the lifelong friends became celebrated surfboard shapers.

“We all lived near Lunada Bay, across from the garbanzo bean or wheat field, depending on the season,” recalled their mutual, childhood friend John Van Hamersveld, who would also grow up to be an influential figure in surfing. Van Hamersveld was Surfing Magazine’s first editor and designed the iconic movie poster for Bruce Brown’s “Endless Summer.” The dayglow image shows three surfers, holding longboards, on the beach at sunset. 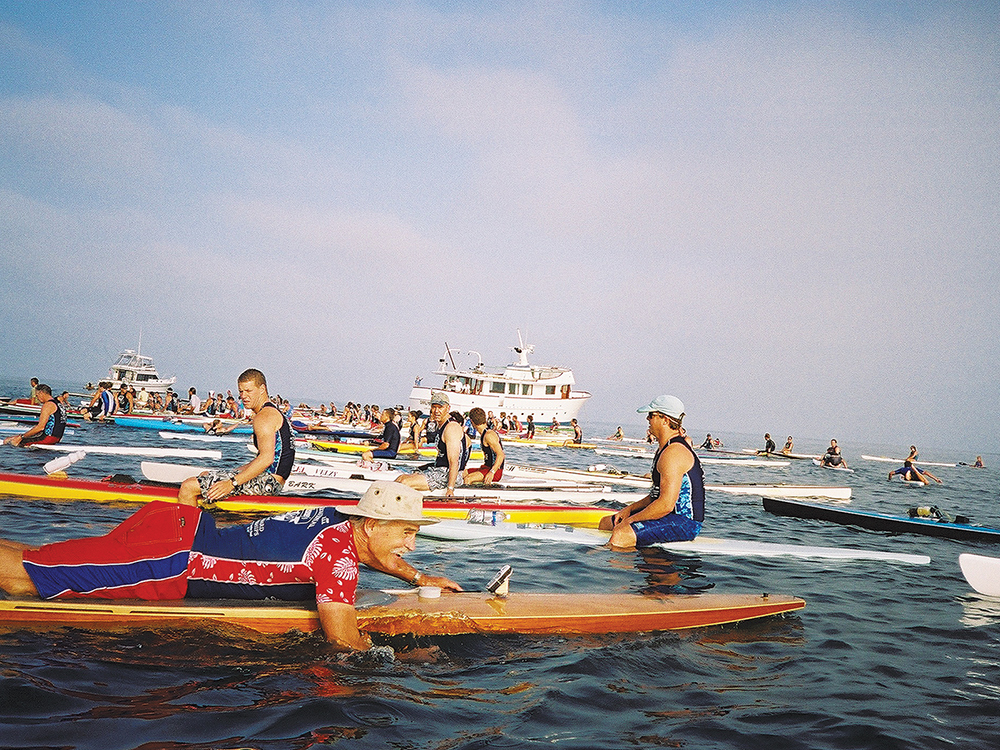 Mike Eaton at the start of the 2006 Hennessey’s U.S. Paddleboad Championships in Hermosa Beach. He is paddling a ‘40s era Tom Blake kook box, with a modern GPS on the deck. Photo by Kevin Cody

Becker was the most prolific shaper in surfing history. Eaton was only one or two shapers behind him. Becker shaped over 130,000 boards, and Eaton over 50,000 boards during their four decades long careers, before shaping machines.

“What set Mike Eaton and Phil Becker apart from other shapers was their perfect rails, which come from shaping thousands of boards,” said Mike Purpus, of Hermosa Beach, a top ranked professional surfer during the ‘70s.

“Phil’s thousands of mid length boards brought more joy and stoke to more people than any of the hot young-gun shapers,” Encyclopedia of Surfing’s Matt Warshaw said, upon learning of Becker’s death.

Eaton learned to swim and to surf from the legendary Tom Blake, inventor of the hollow “kook box’ paddleboard and the surfboard skeg. Blake taught swimming at the Palos Verdes Swim Club (now the Palos Verdes Beach and Athletic Club).

Eaton’s first surfboard was a Blake style, kook box built by his uncle. He attached bicycle wheels to an Army surplus stretcher so he could wheel the 75 pound board down the trail to Bluff Cove.

Becker’s first board was that same kook box. Eaton sold the kook box for $5 to his younger brother Jared and Becker. 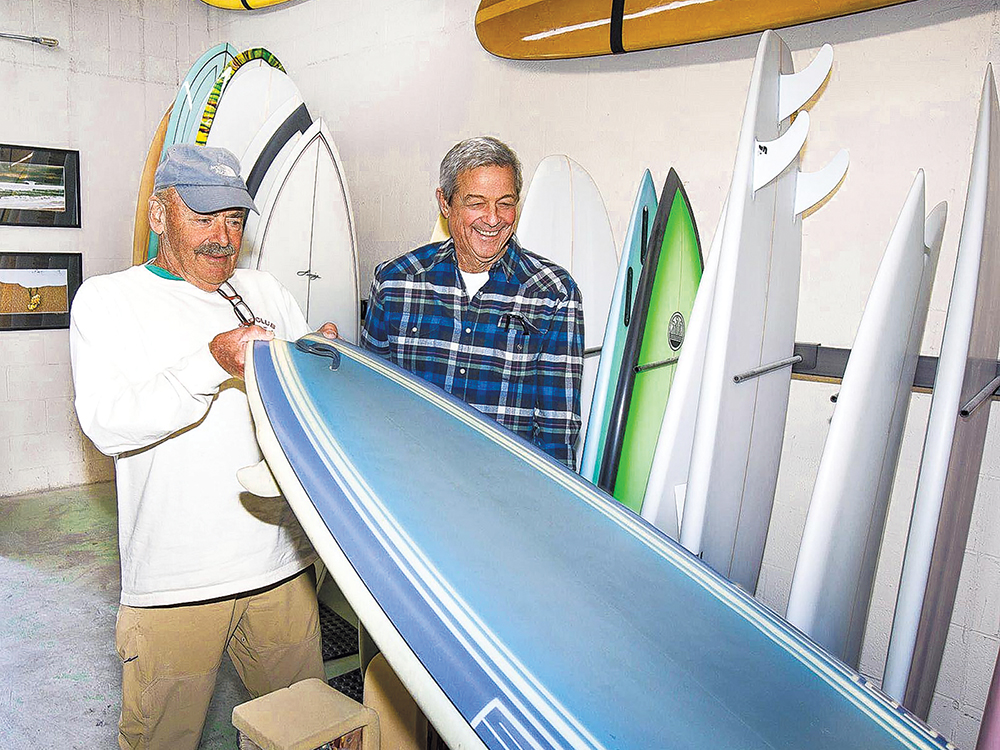 Shaper Phil Becker and glasser Steve Mangiagli examine one of their boards at the Hermosa Beach Becker store. Photo by Mike McIntire.

A rare, color photograph from the early ‘50s shows Becker, looking like Huck Finn, in a straw hat and cut-off jeans, with Eaton, who was five years older, looking like Adonis, holding up their towering boards at Bluff Cove.

Becker began shaping boards in his family’s garage during his teens, with guidance from pioneer surfboard shapers Hap Jacobs and Dale Velzy.

Eaton began shaping boards with Jack O’Neill, founder of O’Neill wetsuits, when he was in the Coast Guard and stationed in Santa Cruz.

When he returned home from the Coast Guard in 1957, he found work as a dolphin trainer at Marineland

“They asked if I knew how to train porpoises. I said, ‘As well as anyone else,’” Easton recalled in a 2019 interview with Boardroom Films.

“I had a small sailboat. I’d sail to work, from my home in Palos Verdes to the Marineland Pier.”

In 1961, Rick Stoner, another early Peninsula surfer, opened Rick’s Surfboards in Hermosa Beach and hired Becker to be his shaper.

Becker subsequently asked Eaton to help him shape for Rick’s. At the same time Eaton started shaping for Bing Surfboards. The two surfboard factories were across the street from one another on Cypress Avenue, in Hermosa Beach. 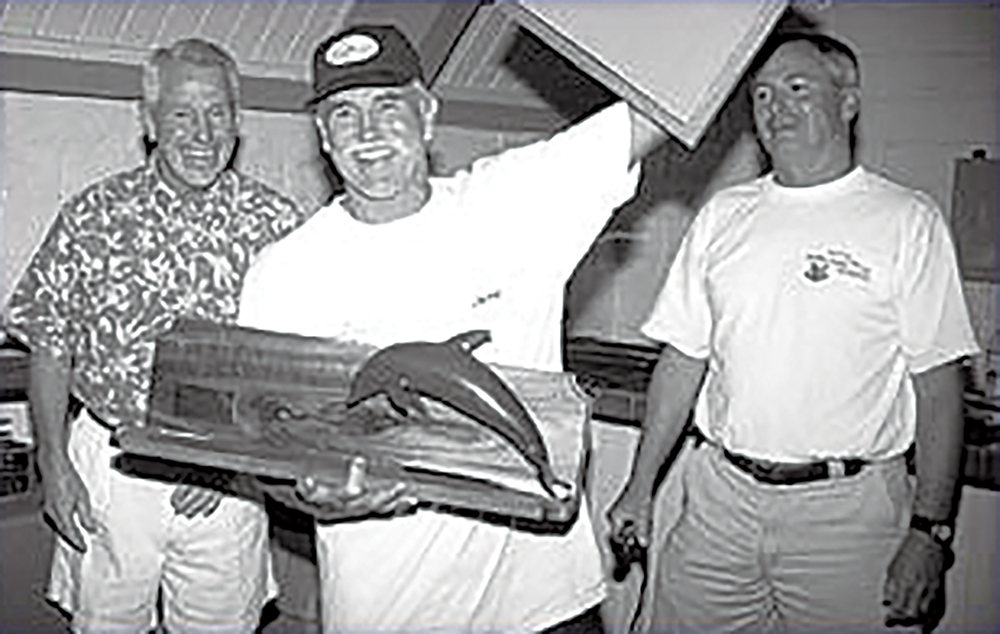 Mike Eaton, at age 65, holds up the Oldest Finisher’s trophy following the 2000 Catalina Classic. With him are Gibby Gibson, and Buddy Bohn, who resurrected the race in 1982. The trophy was carved by Bob Hogan, who previously held the oldest finisher’s title. Hogan completed the Classic in 1995, at age 63, four decades after having co-founded the race. Photo by Kevin Cody

In 1972, Bing sold to Gordon and Smith in San Diego. Eaton moved south and continued shaping Bing Boards until he opened his own shop in San Diego in 1978. Becker opened Becker Surfboards in Hermosa Beach in 1980, with another Peninsula surfer, Dave Hollander, and Steve Mangiagli, of Hermosa Beach.

During their three decade partnership, Becker Surf expanded to seven stores and over 150 employees. In 2007, Becker’s online holiday sales were second in the surf industry to Pacific Sunwear, a billion dollar company with 800 retail stores. The Australian surf conglomerate Billabong acquired Becker the following year.

When not shaping surfboards and surfing, Eaton shaped and raced paddleboards.

“Even paddling for a few miles gets you out on the water and divorces you from civilization,” he told Easy Reader newspaper in a 2000 interview, after competing in the 32-mile Catalina Classic paddleboard race. He first paddled the Classic in 1995 with his friend Bob Hogan, who had founded the race in 1955. Eaton was 60 and Hogan 63. Eaton paddled the Classic a second time, in 2000, when he was 65 because he wanted to be the oldest Classic finisher. But a few years later Skip Connor completed the race at age 67. So in 2005, at age 70, Eaton competed in the Classic a third time.

Water conditions were rough and Eaton finished last, among 53 paddlers

When asked about finishing last, he answered from the perspective of a lifelong waterman: “There are only two positions in the Catalina Classic. First and finish, you can make anything you want out of the stuff in the middle.”

Eaton, with his movie star looks, handlebar mustache and hotrods was as outgoing as Becker was reclusive. When Becker was named an inaugural inductee into the Hermosa Beach Surfer Walk of Fame in 2003, rather than attend the ceremony, he went to work. When inducted into the Huntington Beach Surfboard Shapers Hall of Fame, he sent Hollander to accept the award on his behalf. When newspapers called Becker for an interview, he would put Hollander on the phone, with instructions to pretend he was Becker.

“It’s just my nature,” Becker told surf journalist Sam George in a 1993 Surfer Magazine interview. “I made the boards as the orders came in and didn’t worry much about the rest of it.”

Becker’s and Eaton’s standing in surfing’s Pantheon rests on the quality of the work.

In the early 1970s, another Peninsula native Jeff Hackman, moved to Hawaii and became surfing’s champion.

“Hackman was sponsored by Surfboards Hawaii, but he liked Eaton’s boards better, so he had Eaton ghost shape his boards,” recalled longtime friend Tim Ritter, director of the Hennessey Series Paddleboard races. 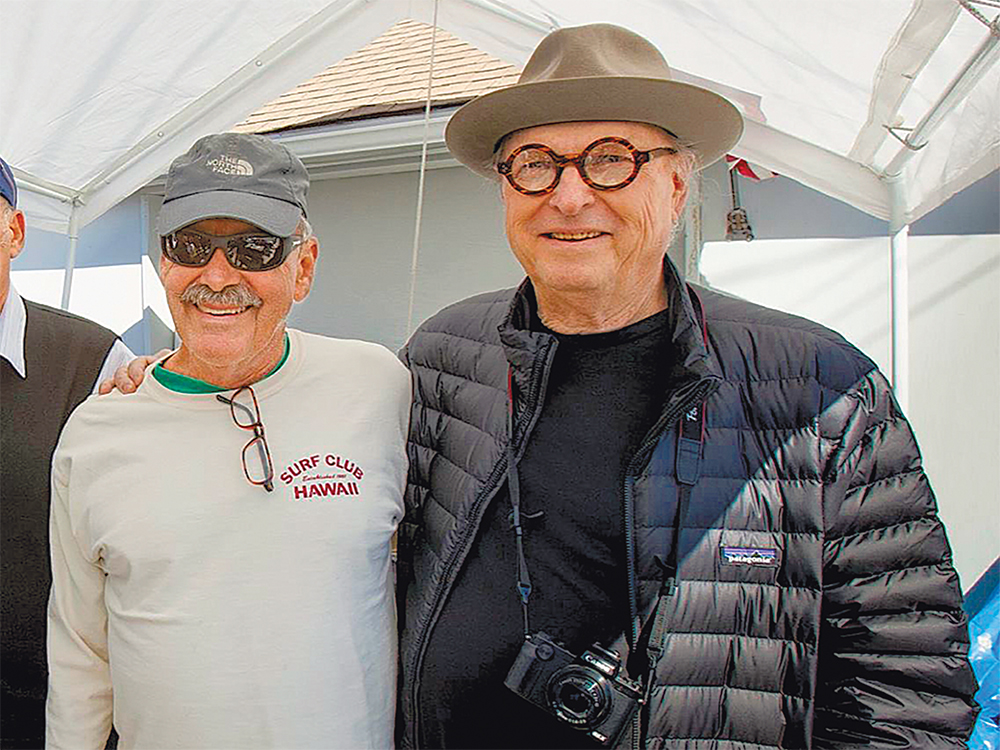 Hollander said of his partner Becker, “If history treats him wrong, Phil will be remembered as a great production shaper who didn’t get design feedback from team riders, because he didn’t believe in having team riders.”

“On the other side,” Hollander said, “Phil did one shaping appointment every afternoon. They were magical. The surfer got to meet Phil and Phil got to know the kind of surfer he was making a board for. Instead of feedback from a few team surfers, he got feedback from a few hundred surfers, of all abilities.”

“Phil’s thousands of mid length boards brought more joy and stoke to more people than any of the hot young-gun shapers,” Encyclopedia of Surfing’s Matt Warshaw said, upon learning of Becker’s death.

“They’re great for doing 300 or 400 identical boards. But they stifle creativity and I don’t like to compromise. We do custom work,” he said in a 2005 Easy Reader interview.