Behind the red curtain at the Hermosa Beach Historical Society Museum 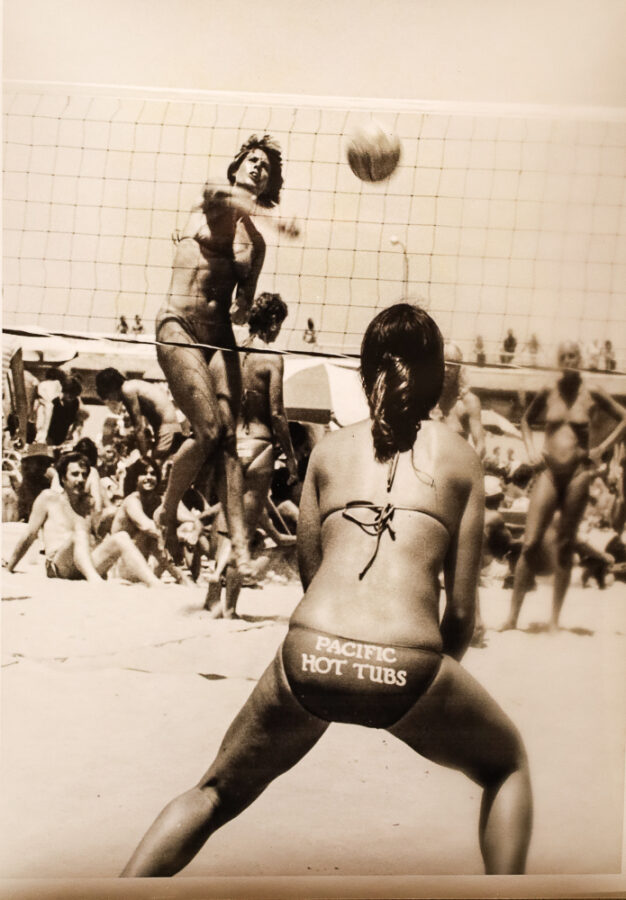 The player in the Pacific Hot Tubs bikini exclaimed, “That’s me,” when she saw this photo in the current Hermosa Beach Historical Society exhibit of photos by Robi Hutas.
by Kevin Cody

Historical Society Board Member Carol Reznichek, who was the volunteer docent that afternoon, asked the visitor why.”

“My friends told me there’s a picture of my butt,” the woman answered

The museum is currently exhibiting the photographs of Robbie Hutas. From 1968 until the early 2000s, Hutas photographed beach volleyball, typically from the back of the court. As a result, he photographed a lot of players’ butts — male and female.

Some of those photos, the Historical Society members determined, didn’t conform to “contemporary community standards.”

But they did have artistic merit, and were representative of Huta’s body of work. So, in keeping with the practice of other museums confronted with “community standards” conflicts, such as the brothel art at Pompei, the museum curtained off a room for Hutas’ prurient photographs.

Upon parting the red curtain, the visitor exclaimed, with undisguised delight, “That’s me.”

She pointed to an undated photo, which appears to have been taken at a Manhattan Beach Volleyball Open in the early ‘70s. The woman is crouched in anticipation of digging a spike by a leaping Nina Matthies. Matthies won seven Manhattan Opens, the first in 1972 and the last in 1986. She was inducted into the California Beach Volleyball Association Hall of Fame in 1994. The CBVA Hall of Fame is housed at the Hermosa Historical Museum.

The player waiting to receive Matthies’ hit is unidentified, except for the words Pacific Hot Tubs stenciled across the back of her bikini bottom. 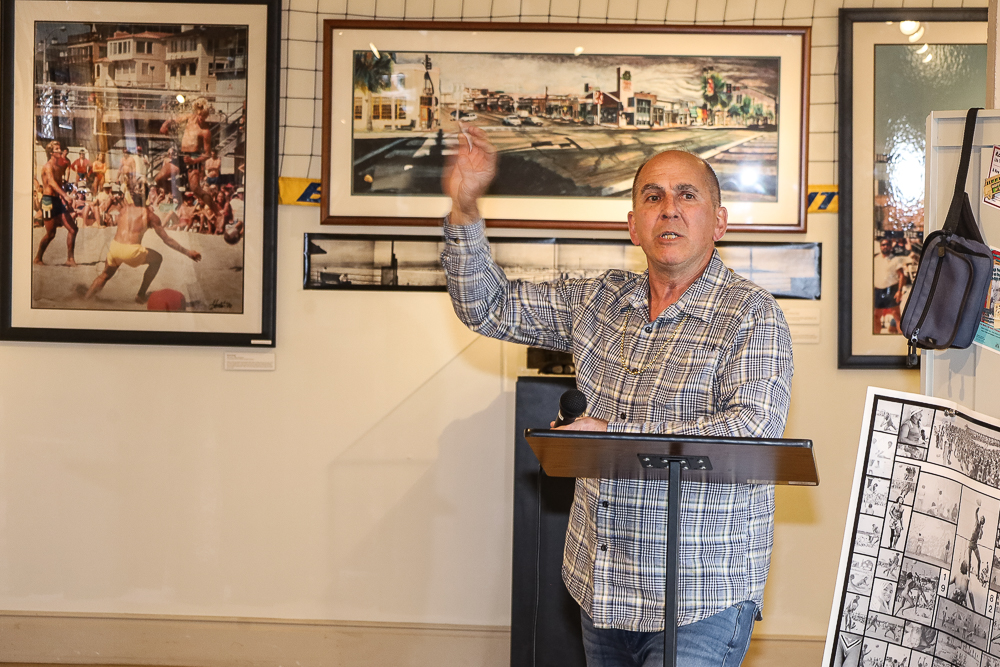 Director Mark Shoemaker welcomes supporters to the Hermosa Beach Historical Museum on Saturday. Behind him is an exhibit of Robi Hutas photographs. Photo by Kevin Cody

Rezninchek recalled the incident this past Saturday during a gathering at the museum to thank Team Hermosa, as its financial supporters have been known.

Henceforth, Rezincehk’s husband, Ricardo, told the gathering, Team Hermosa will be referred to as “benefactors.” The change in nomenclature, he explained, is to conform with the language of the American Alliance of Museums. California has just 27 accredited members. Hermosa’s has begun the process of becoming the 28th.

Accreditation will qualify the museum for grants for projects such as digitizing bound volumes of the Hermosa Review and Easy Reader.

Grants might also go toward docent tours of Hermosa 10 downtown murals. Ten years ago, the Hermosa Beach Mural Committee embarked on commissioning one mural a year, for 10 years. Mural Committee founding member Steve Izant told Saturday’s gathering that over $200,00 had been raised to complete the murals, none of it from the government.

The mural committee disbanded following last July’s unveiling of the 10th and final mural, “The Biltmore Hotel,” on the back of the former Bijou Movie Theater. But not before bequeathing care of the murals to the Historical Museum Society.

The Hermosa  Historical Society’s primary fundraiser is its annual gala.

Board member Jake Courtney announced that this year’s gala will be held Saturday, August 27 at St. Cross Church.

For more about the Hermosa Beach Historical Society and Museum visit HermosaBeachHistoricalsociety.org. ER