Bicycle sharrows, routes to be added citywide in Manhattan Beach 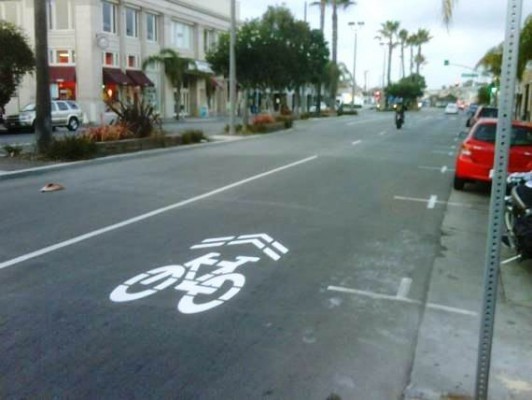 Bike route signs and shared lane markings, known as sharrows, will be added on several streets, including Marine, Pacific, Meadows, Redondo, and Ardmore avenues and Valley Drive. The additions were identified as “low hanging fruit” in fulfilling Manhattan Beach’s part of the South Bay Bicycle Master Plan, a regional plan intended to connect the cities of Manhattan Beach, El Segundo, Hermosa Beach, Redondo Beach, Gardena, Hawthorne, and Torrance via a comprehensive bicycle network. In 2011, the council approved the city’s portion of the Master Plan, which identified 31 miles of new bike routes, bike-friendly streets, bike lanes, and bike paths. But thus far only six miles of bicycle improvements have been added in Manhattan Beach.

What council approved Tuesday will not add any lanes or paths, only signage intended to remind car drivers that the roads are also intended for cyclists. The cost of the improvements will be $65,000.

Mayor pro tem Amy Howorth, who will become mayor at the next council meeting, said one of her priorities is to make the city more bikeable.

“I really want to commit to making this a safer community for people on bikes,” Howarth said.

Councilperson Nancy Hersman said that it was time to act on the city’s promise of six years ago.

“I think as a community, with the Beach Cities Health District, with the Blue Zones, we keep talking about becoming better at being healthier, riding our bikes and putting our cars away,” Hersman said. “I understand a lot of people say, ‘No, no, no,’ this is still a motorist’s town….but we do need to have our children have the opportunity to ride bikes to school.”

Charlene Dipaola of the South Bay Bicycle Coalition, the organization who advocated for the Master Plan, said the improvements will help everyone from students to people like herself who just want to be able to cycle safely to lunch.

“It will help connect our city,” she said. “Most importantly, it will provide safer routes to schools.”

Jon Chaykowski, who twice bicycled across the country to raise money for local schools, said sharrows are “harmless and helpful” and the more that are installed the safer cycling will be locally.

“It will also encourage drivers to know that California law says they have to give three feet between any part of a bike rider and their car,” he said.

Mayor David Lesser noted that the city faced opposition from residents six years ago who specifically opposed sharrows and signage as “visual clutter.” He said he approved of making the city more bike friendly but wondered if by approving sharrows and signs the council would make it harder to finally implement “more substantive” additions such as new lanes and paths.

“We had this chamber filled with property owners absolutely opposed to sharrows on their streets,” Lesser said.

Councilman Steve Napolitano likewise said he approved of better bikeability in the city but cautioned that the sharrows, which are painted in the middle of the roadways, may embolden cyclists to use that part of streets and further frustrate motorists.

Howarth said the bike route signs are small and carefully placed to minimize clutter, and noted that even as an only occasional cyclist, sharrows make her feel safer.

“What those green signs help with, it’s not what we used to refer to as ‘the spandex crowd’….Those bike route signs, I think, will be really helpful for kids going to schools,” Howarth said.