Big Miracle: a whale of a tale and a miracle of a movie [MOVIE REVIEW] 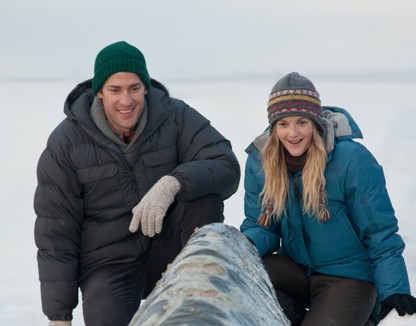 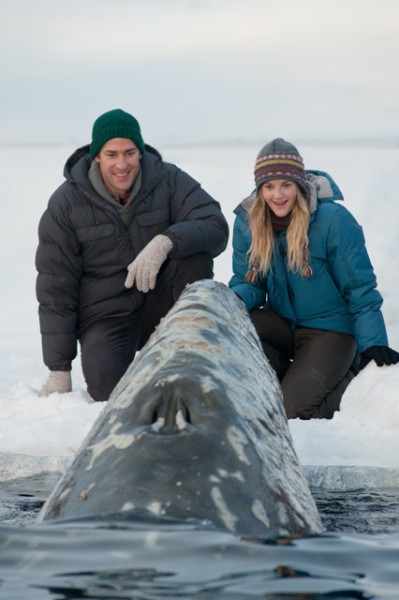 There are miracles for everyone in “Big Miracle.”

The film was written by Jack Amiel and Michael Berger, based on the book Freeing the Whales by Thomas Rose, and wonderfully directed by Ken Kwapis. Based on a true story, “Big Miracle” follows the controlled chaos and unlikely cast of characters who found a way to work together to free a family of California gray whales who had been trapped off the coast of an Alaskan town located above the Arctic Circle.

Adam Carlson, a field reporter for the Anchorage NBC affiliate, had just finished a series of human interest stories in Barrow, Alaska, a small town made up of Iñupiat tribe natives. Filming some snowboarding tricks at the icy coastal edge, his attention is diverted by the sight of the breaching of a whale through a small hole in the ice. Investigating further, he is told by the townsfolk that a family of whales has been caught by the early onset of winter and was trying to survive. The natives explain to him that the whales are doomed and that the native town council will more than likely vote to kill the whales both for food and as a part of their ancient cultural and ceremonial tradition.

Carlson films a report on the dire situation of the whales, nicknamed by him as Fred, Wilma and Bam Bam, and sends it off to Anchorage. In one of those moments of serendipity, both for Carlson who longs to work in the lower 48, and the whales, his small piece is picked up by the national news. Tom Brokaw, it turns out, was a sucker for a good animal story. Kwapis masterfully incorporates actual archival footage of the reporting into his storytelling and we are treated to the actual news reports by Brokaw, Rather, Jennings and others.

Carlson is soon joined by ex-girlfriend Rachel Kramer, the local representative of Green Peace, and a huge contingent of international television reporters. His small story has captured the imagination of the world. It has also captured the attention of oil baron J.W. McGraw, who eventually realizes his financial assistance will go a long way toward reshaping the image he has as a defouler of the Alaskan wilderness. More importantly, however, this story has captured the attention of Ronald Reagan, president of the United States, who convinces the governor of Alaska to provide the aid of the National Guard.

The story highlights the miracle of saving the whales as well as bringing together so many parties with opposing agendas to work in harmony for a cause. More miraculous, though, is that Kwapis succeeded in bringing together so many different story threads and so many recognizable stars, some in miniscule roles, and blend them into what could have ended up feeling like a TV movie instead of a first rate family film.

The primary story is compelling, the pacing brisk, the characters all show growth without undue sentimentality – a difficult task when the subject matter screams maudlin – and the audience is reminded of an event that captured the world’s attention for a couple of weeks. We are treated to views of the Alaska wilderness, an unforgiving natural wonder; and we learn a great deal about the Iñupiat natives, a people who strive to maintain their identity, a task made more difficult when the outside world crashes into them, judgmentally condemning them for their hunting of ocean creatures (including whales). But even more delightful is to see so many favorite actors, some of whom you’ll know and others of whom you will recognize, having so much fun in a film that could have failed in so many different ways and instead triumphs.

John Krasinski, Adam Carlson, is a true star who understands the meaning of “works and plays well with others,” for he captures and holds the screen with his sweetness and warmth and exudes chemistry with his co-stars, from Ahmaogak Sweeney as Nathan, to Kristen Bell as a vacuously ambitious LA newscaster and Drew Barrymore as Rachel Kramer, a role in which she is not afraid to appear shrill and unbending before she mellows. John Pingak as Malik drips with a quiet strength whose presence shores up the understanding of his native culture and young Ahmaogak Sweeney as Nathan whose believable wide-eyed innocence entrances Carlson.

Ted Danson, J.W. McGraw, fairly bursts with malevolent delight at the prospect of drilling in the wilderness and using the whale incident for his own needs, until, gradually and remarkably, it is for the needs of others than himself. Special mention should be made of the wonderful Kathy Baker as his wife who quietly rolls that first snowball of an idea to help that becomes an avalanche of good will.

There are so many others with roles from critical to delightful. Dermot Mulroney, in his second frigid Alaskan role, is fine as a National Guardsman, as is Vinessa Shaw as the Reagan aide who convinces the president to act (and whose real life equivalent married the real life equivalent of the National Guardsman). Tim Blake Nelson brings his usual quirky groundedness to the role of a naturalist, Rob Riggle and James LeGros are incandescent scene stealers as two brothers from Minnesota with a novel deicing machine. Filling out the amazing cast are Stephen Root as the governor and John Michael Higgins as a glory-hogging LA newscaster.

And do not leave before the end of the credits or you will miss a fleeting glimpse of a one of Alaska’s most prominent citizens in her brief role as a TV news reporter (You betcha!).

Sit back, have fun. You don’t need 3D in order to have a movie surround you.

Neely also writes a blog about writers in television and film called No Meaner Place.