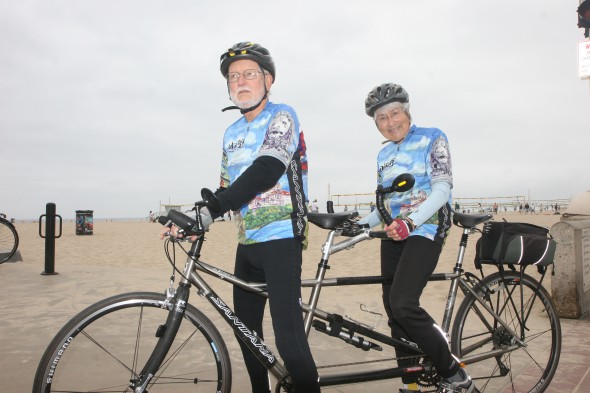 Dick and Lois Pio aboard their favored brand of locomotion. Photo by Robb Fulcher

Octogenarians Dick and Lois Pio have pedaled some 15,000 miles on their 30-speed tandem bicycle, but the stretch they never look forward to measures only about 500 feet, and it lies near their north Hermosa home.

And they’re not the only ones pedaling that stretch; it’s where the city’s seaside bike path jogs from the Strand at 24th to continue northward along Hermosa Avenue, before connecting with the bike path going into Manhattan Beach.

As it is, northbound cyclists must either brave the 500-foot stretch or remain on the Strand until they reach its north Hermosa terminus, where they must carry their bikes up 12 concrete steps from the Strand to the bike path entering Manhattan.

Dick Pio says both problems could be fixed by building a concrete ramp from the Strand’s terminus, connecting directly to the Manhattan bike path. The stairs would remain, for pedestrians, but cyclists would have no need for the 24th Street jog or the bike-carry up the stairs.

Pio has been pushing the ramp idea for five years, and he’s planning on bringing it to a workshop for the South Bay Bicycle Master Plan, 7:30 to 9 p.m. Thursday, June 23 at the Clark Building, 861 Valley Drive.

Some difficulties have been raised with the plan, including the question of how to slow down cyclists who would go southbound from Manhattan’s bike-only path onto the Hermosa Strand, where pedestrians, skaters and cyclists mix in a slower and more cautious manner.

“On weekends literally thousands of bikes with hundreds of walkers, runners and parents pushing baby carriages use the Hermosa multiple-use path,” Pio said.

Pio, a retired Hughes Aircraft engineer, showed photos he took over the Memorial Day weekend including children on bikes riding next to the traffic.

He also showed the city’s official bike safety pamphlet, which advises “NEVER ride against traffic on the road, in a bike lane, or on a sidewalk,” in red letters for emphasis. And he showed letters and emails he has written since 2006 to push for his concrete solution.

“Nothing has ever happened,” he said. “…It’s the obvious solution.”

Dean Francois, a former Redondo Beach public works commissioner and current president of Friends of the South Bay Bicycle Path, said he would like to see the ramp, but the matter is not a simple one.

Francois, who has been watching preparation of the South Bay and Los Angeles County bicycle master plans, said it’s not clear whether the authority to build the ramp would fall to officials of Hermosa and Manhattan or those of the county. The ramp would have to pass muster with the California Coastal Commission as well, and people with homes nearby would presumably have their say.

Moreover, the ramp would carry southbound cyclists from the bike-only stretch of the path in Manhattan onto the mixed-use Strand, and Francois said he did not see how the cyclists could be slowed down enough to blend safely onto the Strand.

Another solution could be to build a small ramp along the north Hermosa stairway so that cyclists could roll their bikes alongside the stairs instead of carrying them, after the fashion of some train stations, Francois said.

But a rebuilding of the stairway would trigger the Americans with Disabilities Act, presumably requiring wheelchair access up and down as well, he said.

Pio said the problem of slowing down southbound cyclists would have to be resolved in the planning of the ramp. Perhaps a gentle slope could be added, or small bumps could be built onto its surface.

Pio, 83, and Lois, 82, have lived in Hermosa 43 years and pilot their black Santana tandem along bike paths in the South Bay, Oxnard area, along the Los Angeles River, and even along the Rhine River to Amsterdam for their 60th wedding anniversary.

Dick sits up front where he does the steering, braking and gear shifting.

A Hermosa workshop for the South Bay Bicycle Master Plan will be held 7:30 to 9 p.m. Thursday, June 23 at the Clark Building, 861 Valley Drive. For more on the plan and other workshops see SouthBayBicycleCoalition.org.