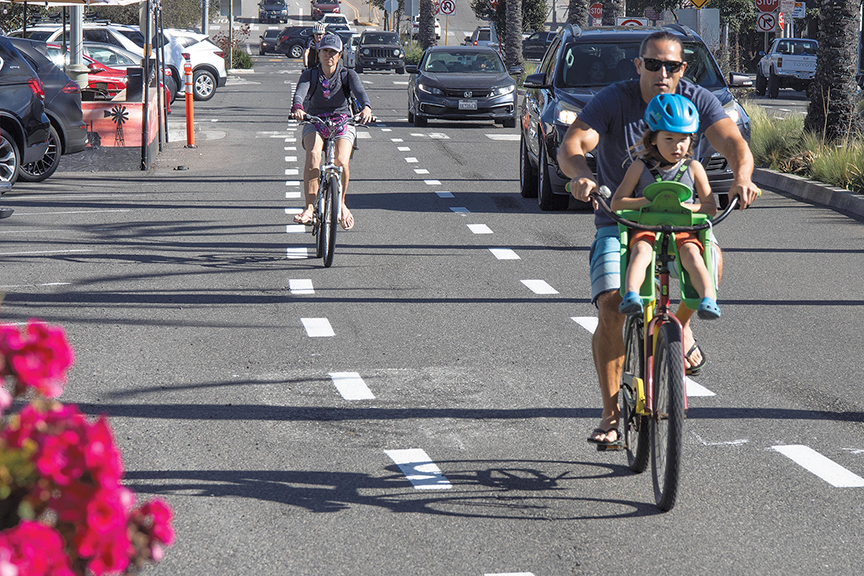 A year-long plan to re-design traffic flow on Hermosa and Piers avenues was completed Friday, more than a week ahead of schedule. New bike lanes and additional outdoor dining and shopping areas were added.

The changes are designed to assist local businesses to survive during the pandemic, said Mayor Justin Massey, who announced the project’s completion during his Saturday morning online “coffee klatch.”

The project involved re-striping traffic lanes on Hermosa Avenue, between 8th and 14th streets; and on Pier Avenue, between Hermosa Avenue and Valley Drive. Seven ADA-accessible parking spots were also added. Changes are to remain in place for the next six months, according to city officials. No permanent infrastructure, such as curb extensions, have been installed.

One car lane in each direction on the two streets has been eliminated to allow businesses to expand on-street decks and to create safe pedestrian zones. (Outdoor dining, now banned by the Los Angeles County Public Health Department, will resume when the COVID-19 surge subsides.) Sensors have been installed to count traffic flow.

Others were not so enthusiastic.

Resident Lorie Armendariz said, “Nobody wants the new stripes. In driving down Pier Avenue, there is already confusion as to whether or not cars are allowed to drive on the bike lane. And if they’re not, we’re going to have massive traffic jams. This was not well thought out.”

Armendariz is part of the Facebook group  Advocates for Hermosa Beach.

City Manager Suja Lowenthal responded to complaints about the loss of car lanes by issuing a statement, which said, in part, “We recognize drivers experienced some delays when the first weekend of the temporary lane realignment coincided with large crowds coming to Hermosa Beach to enjoy the summer-like weather at the beach. We ask everyone to please be patient as people adjust to the new alignment and to recognize that this is a temporary change designed to help our local businesses struggling to survive during the pandemic….We will continue to evaluate and make modifications as needed to keep traffic flowing and keep our businesses open.”

Lori Ford, owner of Gum Tree on Pier Avenue, noted, “I’ve seen a lot of conflict online about this, but I really think [the project] will be helpful.” Gum Tree is a gift shop with an “Aussie-inspired cafe,” according to its website. Ford said her business depends on pedestrian accessibility.

“I just hope this will help slow down vehicle traffic, on both Hermosa and Pier, because up to now it’s been a real problem,” she said.

Additional parking at the top of Pier Avenue is “all we need now, because we need people to be able to walk past our businesses.”

Council members have said the project will be reevaluated some time in July. ER