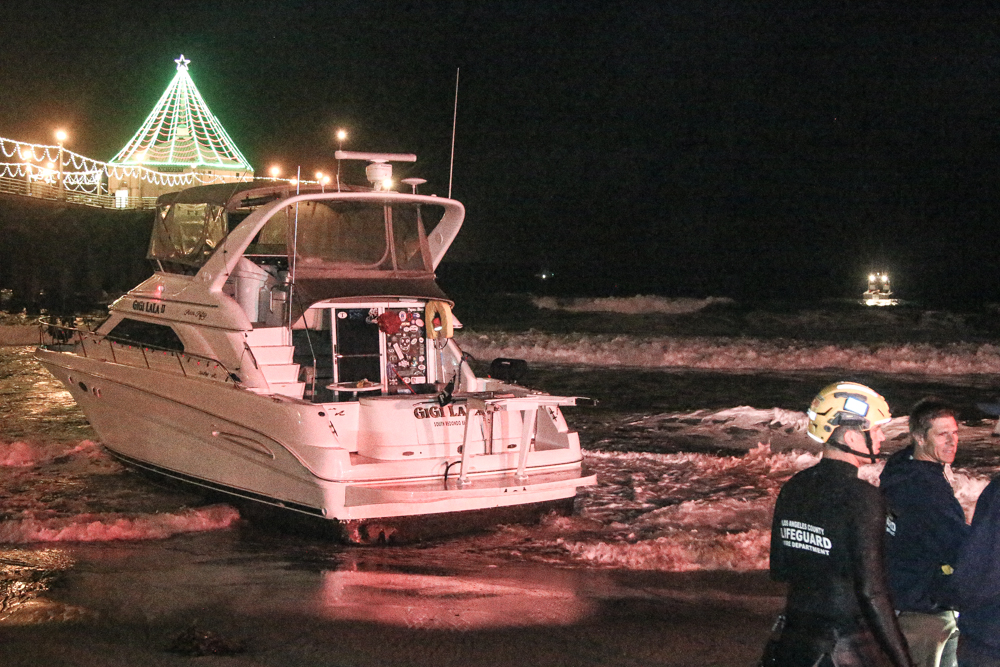 Gigi Gi La La II waits for Baywatch to pull it off the beach at the Manhattan Pier. Photos by Kevin Cody

Dana Lauren and and six of his friends anchored GiGi LaLa II, Lauren’s 45-foot Sea Ray powerboat, a safe 300 yards off the end of the Manhattan Beach pier Sunday night. The annual Skechers Manhattan Beach Fireworks show was about to begin. The evening was clear and there was a brisk, onshore wind, and the fireworks would be unusually colorful.

“The wind increases the oxygen in the air, which makes the fireworks burn faster and brighter,” fireworks operator Frances Marquez explained after the show.

But instead of enjoying the fireworks, Lauren and his friends became a part of the show, to the horror of Marquez, who was coordinating the fireworks launching from the pier, and the thousands of fireworks spectators on the beach.

“I saw the boat drifting in, closer and closer to the pier. We made sure none of our fireworks exploded over them. Then the waves picked the boat up and turned it sideways and pushed it onto the beach,” Marquez said. 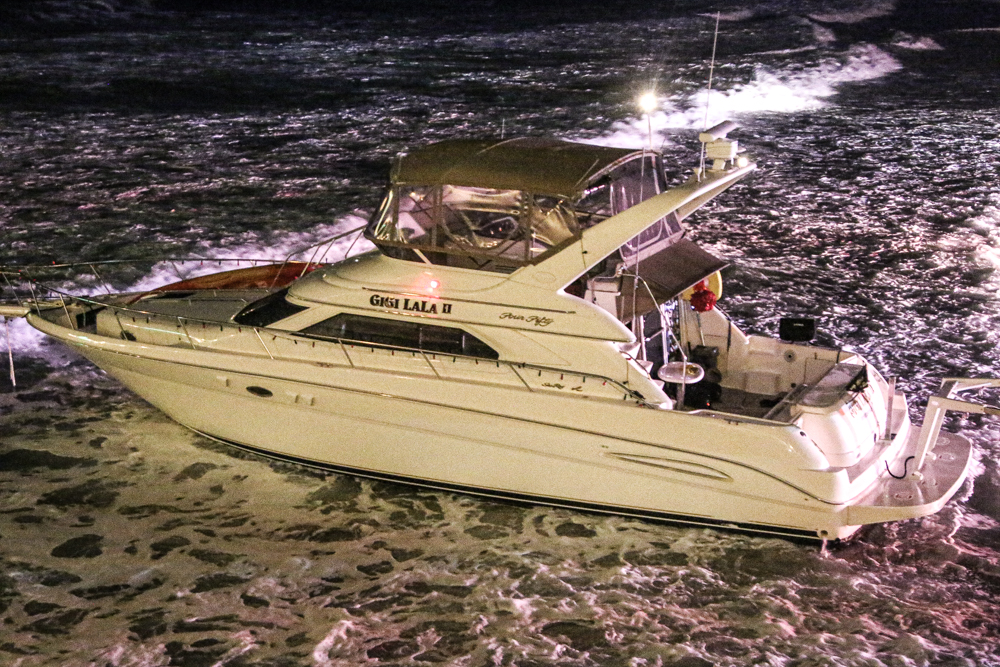 GiGi LaLa II missed crashing into the pier by less than 100 yards.

“Just before the fireworks began, my anchor alarm rang, indicating the boat was moving off its position,” Lauren said afterwards. “So I went to the helm and two of my friends went below to raise the anchor. But the windlass (anchor winch) jammed and when I drove the boat out to sea the anchor chain got tangled in the starboard prop.”

Lauren radioed for help over marine emergency station 16. The call was picked up by Redondo Harbor Patrol Officers Matt Bandy and Grant Currie. When they arrived at the end of the pier, aboard Harbor Patrol Boat 63, GiGi LaLa was inside the surf line and fewer than 100 yards away from the pier. Los Angeles County Lifeguards Ivan Wilkins and Spencer Parker had paddled off the beach to the boat. Wilkin boarded the boat and Parker swam out to Baywatch Redondo, off the end of the pier, for a towline, and then swam the line back to GiGi La La II. As the fireworks grand finale exploded overhead, passengers leapt from the boat and were helped to the beach by lifeguards.

Harbor Patrol Officer Currie also swam a tow line ashore. The two lines were just barely long enough for lifeguards to secure them to GiGi LaLa II’s bow cleat. Lifeguards then cut GiGi LaLa II’s anchor line and Baywatch Redondo and the Harbor Patrol Boat spent the next 10 minutes attempting to pull the now beached boat back out to sea. Finally the boat’s bottom screeched off the beach, bringing cheers from the fireworks spectators. 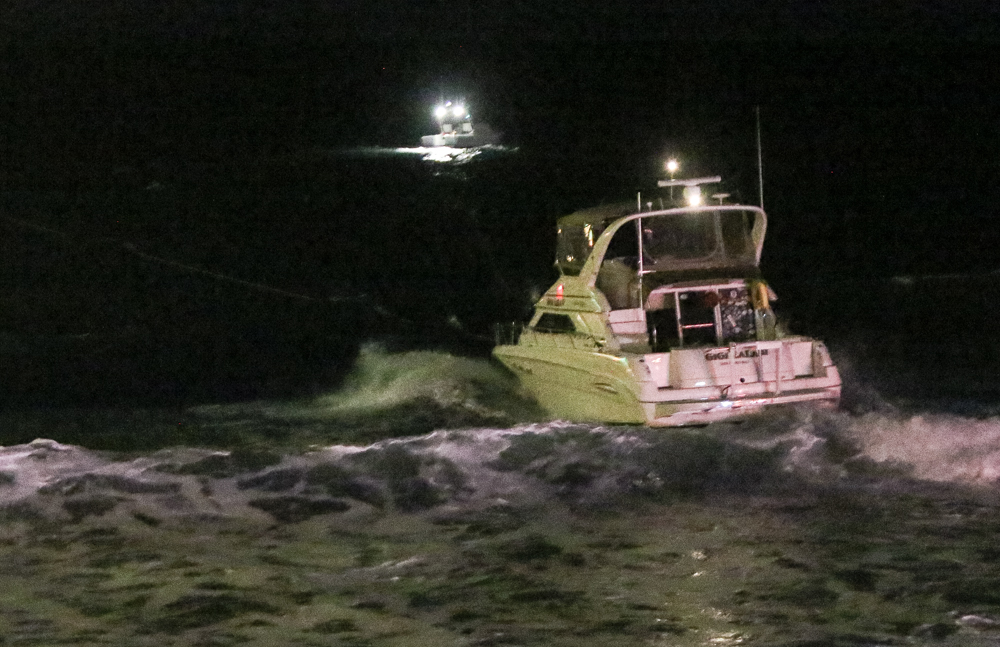 GiGi LaLa II gets a two back to King Harbor.

Once GiGi LaLa II was safely beyond the pier, lifeguards determined it wasn’t taking on water  and towed it back to its slip in King Harbor.

“The lifeguards and harbor patrol did a great job,” a relieved Lauren said.

Redondo Beach Fire Department Division Chief Jason May attributed the beaching to a combination of onshore wind, large waves, a broken windlass, darkness and the added distraction of exploding fireworks. He credited Lauren with using his port engine to keep the boat from a potentially tragic crash into the pier pilings.

Sunday evening’s boat rescue was the day’s second coordinated rescue between Los Angeles County Lifeguards and Redondo Redondo Beach Harbor patrol officers. Shortly after noon, Sunday, a sailboat entering the harbor radioed over station 16 that a man they had seen atop the breakwall had disappeared after being knocked down by a wave.