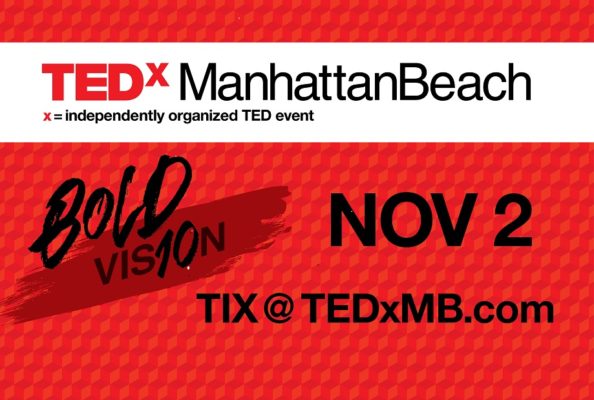 A bioremediation engineer, an amphibious housing architect, a robotics engineer, and a couple sleep scientist. A forgiver, an Alzheimer’s disrupter, an urban climate scientist,  an augmented reality storyteller, a music man, and a pair of sound healers (who also happen to be brothers and war veterans).

These are some of the speakers at this year’s TEDxManhattanBeach, and what they have in common is the title of this year’s event: “Bold Vision.” In truth, that title could apply to any of the last ten years’ worth of TEDxManhattanBeach talks, because that is what the event trades upon: bold ideas, shared.

“It’s reflection time, and we don’t have a lot of that,” said Kate Bergin, who has been the event’s lead organizer since 2011. “It’s brain food. It’s soul food. And people don’t get a chance to experience this every day.”

The event grew out of the TED conference that began in Monterey in 1984 intended to flesh out the convergence of three fields —  technology, entertainment, and design — which included a demo of the compact disc, the e-book, and 3D graphics from Lucasfilm. The TED talks grew in popularity in the early 2000s through their videos, which are always free online, based on the TED ethos “ideas worth spreading.” In 2009, the non-profit organization began granting licenses for smaller TED talks around the country and eventually the world. Manhattan Beach resident John Marsten obtained one of those licenses and launched the first local TEDx at the Joslyn Center in January 2010.

Bergin, who took over in 2011 lest the fledgling event die locally, notes that TEDxManhattanBeach is now the longest-running TEDx event in California, outlasting TEDxUSC and TEDx CalTech and beginning three years prior to TEDxUCLA. Videos from TEDx Manhattan Beach have indeed spread ideas worldwide, led by the 10 million views (the 10th most of any TED talk) garnered for a talk given by a 12-year-old app developer from Manhattan Beach, Thomas Suarez, in 2011.

“We have approximately 30 million views from all our talks,” Bergin said. “This is serious. We are really doing this.” 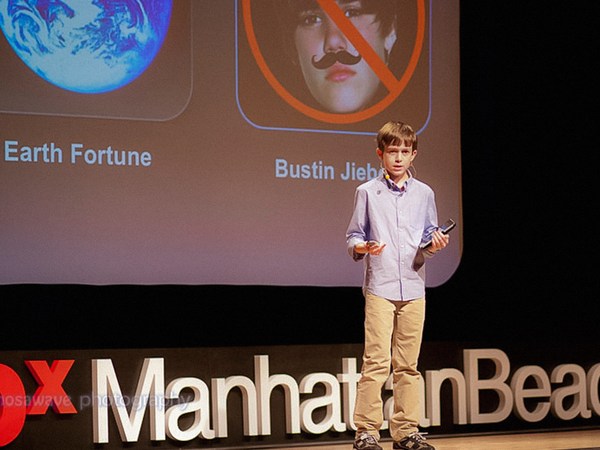 Ideas from the talks have had local, regional, and even global impact. In 2011, 2012, and 2013, TEDx Manhattan Beach brought Fab Lab Makerspace, a mobile hands-on education lab that began at the MIT Media Lab in which Science, Technology, Engineering, Math (STEM) principles are taught through art (STEAM). Now all MBUSD elementary schools have MakerSpace programs on campus.

“We drop seeds of ideas, and it’s up to the community to water them,” Bergin said. “We have seen a lot of these ideas grow locally.”

Sleep researcher Wendy Troxel’s 2016 talk, “Why School Should Start Later for Teens,” resulted in later school start times locally and helped inspire legislation passed just this month in Sacramento which will push back school times in middle schools and high schools statewide. That talk, Bergin said, also reached communities in Thailand; a Thai teenager wrote TEDxManhattanBeach in thanks for not having to wake up at 5 a.m. daily.

Another talk, “The Power of belief — mindset and success,” given by Eduardo Briceno in 2012, is now on the curriculum for all 2,000 freshmen annually at the University of Notre Dame.

“We are on the national stage. We have a global impact,” Bergin said. “TEDxManhattanBeach — I mean, it really is something. You do this because you think sharing good ideas will make our community a better place, and it does, but it also makes the world a better place. I didn’t get into it for that, but it’s amazing to see the impact we have.”

Bergin and a committee of about 20 local residents work on the event year-round. By now, she has become a curator of talks, with a network of people helping her find people who not only have a story to tell but one that has a big idea embedded within it. Each event features 12 to 15 speakers, who Bergin works with to hone their talks to about 10 minutes.

The event also includes interactive experiences and healthy food, as well as a special dinner afterward with all the speakers.

“We are preparing this amazing event for one day, getting everyone together to hear speakers, to explore interactive experiences and try some healthy food and meet people and talk about ideas,” Bergin said. “Everyone leaves feeling like their brain or soul is just a little more full than when they walked in in the morning.”