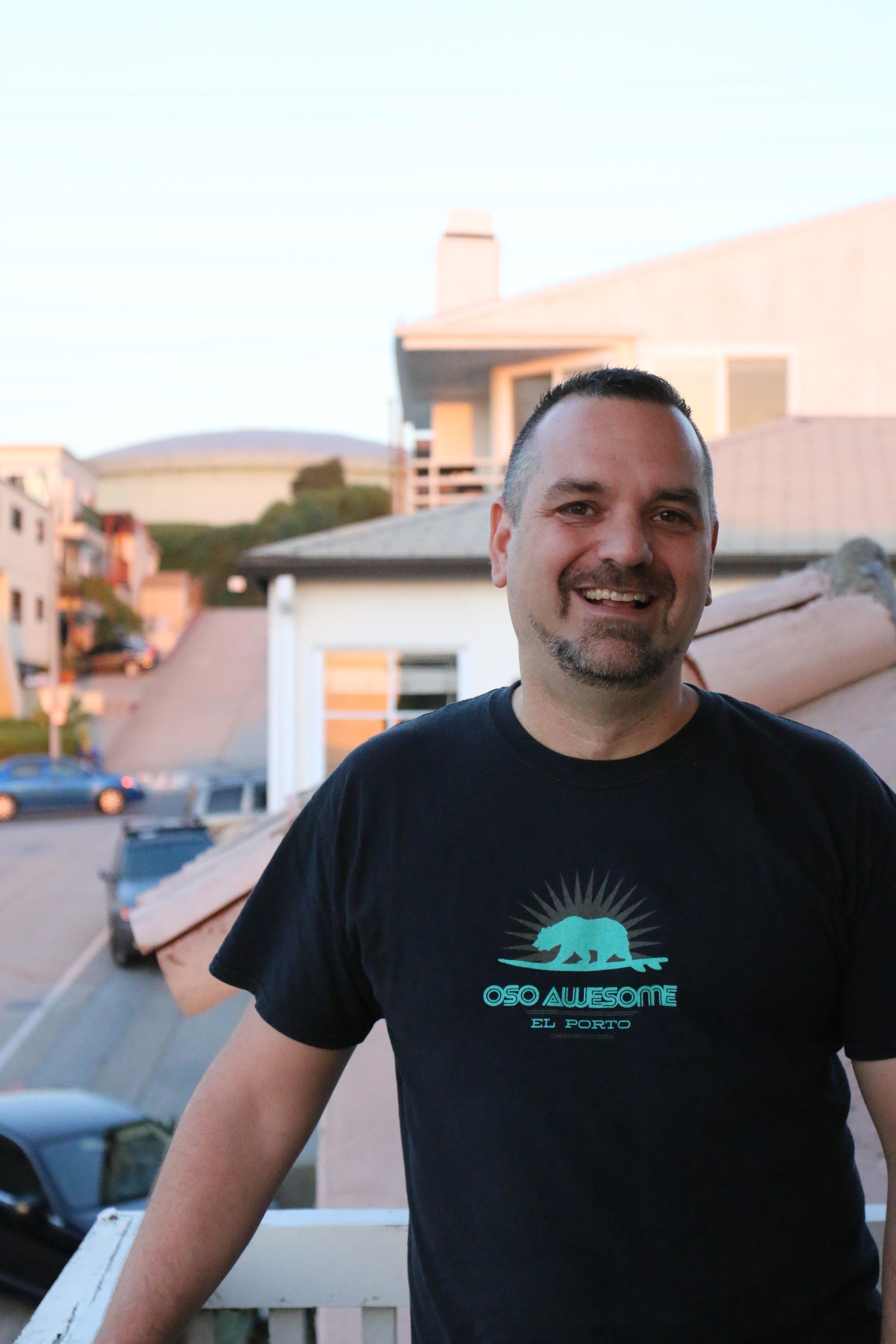 Jon Berry outside his El Porto apartment, wearing a t-shirt from his brand Osoporto. Photo by Caroline Anderson

The smokestacks don’t bother Jon Berry, who can see them from the living room of his second floor apartment on 44th Street. As long as it’s not cold and there’s no construction going on, he leaves the front door open so he can see them while sitting on his couch.

“I love those stacks,” he said last Friday as he watched their red lights blink at twilight. “It’s the character of the neighborhood. It’s not pristine and perfect.”

Berry, 47, tries to capture this aspect of the neighborhood in the art, clothes and home goods that he designs under his brand “Osoporto”—“porto” as in El Porto, and “oso” as in the Spanish word for bear, or as in, “(That’s) oh so (El) Porto!”

Now known to some as North Manhattan Beach, the neighborhood between Rosecrans Avenue and 45th Street used to be unincorporated until its southern neighbor annexed it in 1980.

Berry launched his project a year and a half ago with a Kickstarter campaign that funded his first round of T-shirts and sweatshirts and startup costs like a Manhattan Beach business license and website. The line is a creative outlet from his day job doing graphic design for things like the Olympics and the opening sequence to the reality show “Toddlers and Tiaras.”

These days, his contracting work is all video. But when he started out as a new art school graduate, everything was done by hand. So he usually starts his Osoporto designs on paper.

The idea for his favorite piece, a poster depicting the “Swim/Surf” sign typical on the beach, came to him in his sleep. When he woke up, he scribbled it down in his notebook.

Surfing is a common theme, although Osoporto “wasn’t intended to be a surf brand.”

“Surfing is part of the fabric of El Porto,” he said. “You don’t have El Porto without surfing.” 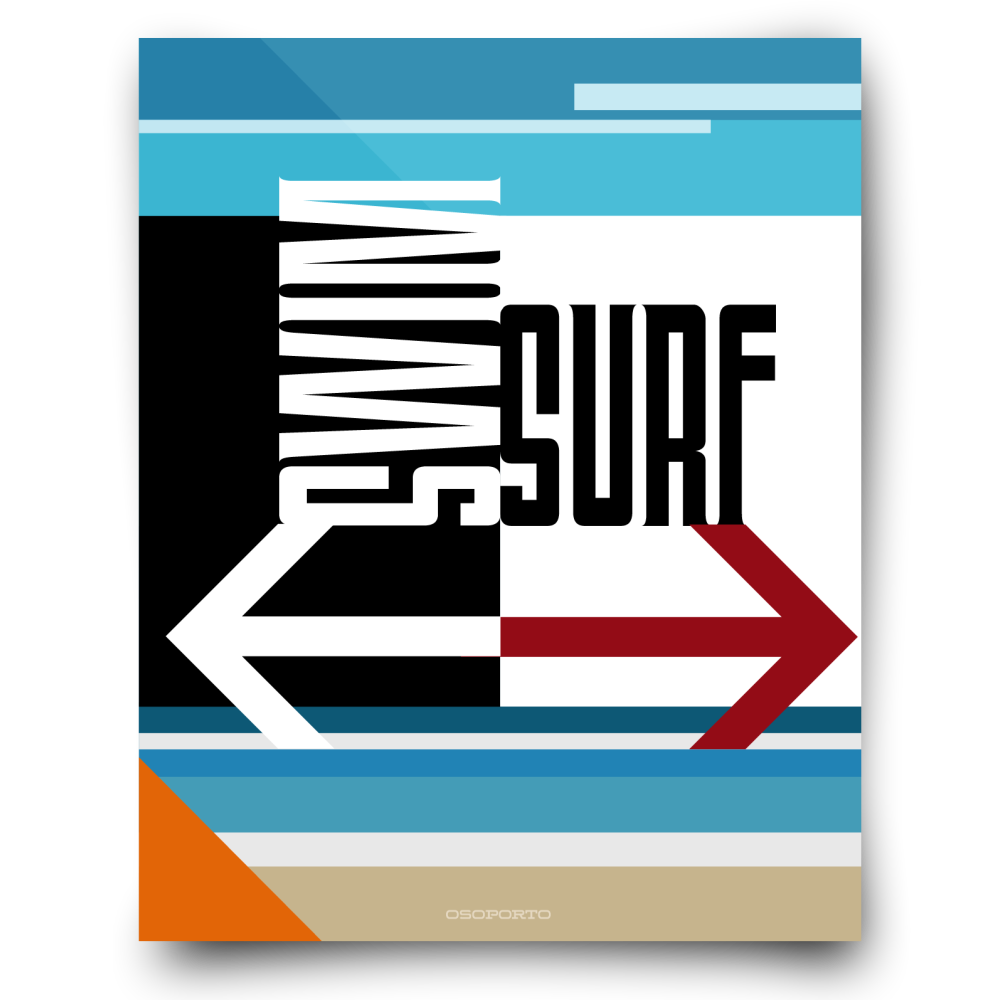 And there’s the bear, which he called “accidental.”

“More than anything, it’s the California bear,” he said. “It’s a theming vehicle to give me something to design around. Also, people seem to like bear stuff.”

His latest piece is a series of collages of photos from his Instagram account, which has 2,405 followers. Strips of similarly-colored photos of things like doorways or wooden fences around the neighborhood are stacked horizontally, appearing to show one cohesive image. He described the concept as a “Mark Rothko-esque version of photography.”

“What I love to do is to show the beauty of the old, the existing, the run down,” he said. “I love El Porto — it’s rough around the edges, it’s old school. It is what it is.”

The Instagram account has become a project in itself. Berry spends several hours every day on social media, posting photos of the beach, surf condition updates and photos of his line. Since his stuff is only available in one store as of now, Motion Bicycle Establishment in Hermosa Beach, most of his customers find him online, he said.

A few local companies silkscreen his various products, which include mugs, pillows and soon, hats. One business had also been filling orders that came through his website, Osoporto.com, but it got to be too expensive for the small quantities he produces. So now he fills orders himself from his two-bedroom apartment, which is scattered with boxes of t-shirts.

About two thirds of his customers are local, he said, and the rest come from places like Ohio, New York or Australia. He guesses they have some connection to the place, whether through family or a past visit.

Berry, who is originally from Virginia, discovered El Porto 11 years ago through a work friend after moving to Los Angeles for a job with ABC.

“I was looking for places and I wanted to be near the beach,” he said. “I came, looked around, and it just felt right.”

Even in the time he’s lived there, he said, things have changed.

“There was a lot less fancy stuff,” he said. “The neighborhood is rapidly changing. The little beach houses, bungalow side of El Porto — not mansions and martini bars. It’s the other side of the tracks of Manhattan Beach, which is what we like about it. Hopefully it doesn’t lose its character.”

He’s not holding his breath, however.

“I figure at some point I’m going to get priced out,” he said. “Rents have increased a lot. I’m waiting for the shoe to fall.”

The description for the Osoporto Twitter and Instagram accounts seems to anticipate this loss. Or maybe it’s already happened.

“Where the bear meets the surf,” they read. “Art, apparel, & more from the lost beach town of El Porto. Locals don’t use the N(orth) word.” ER