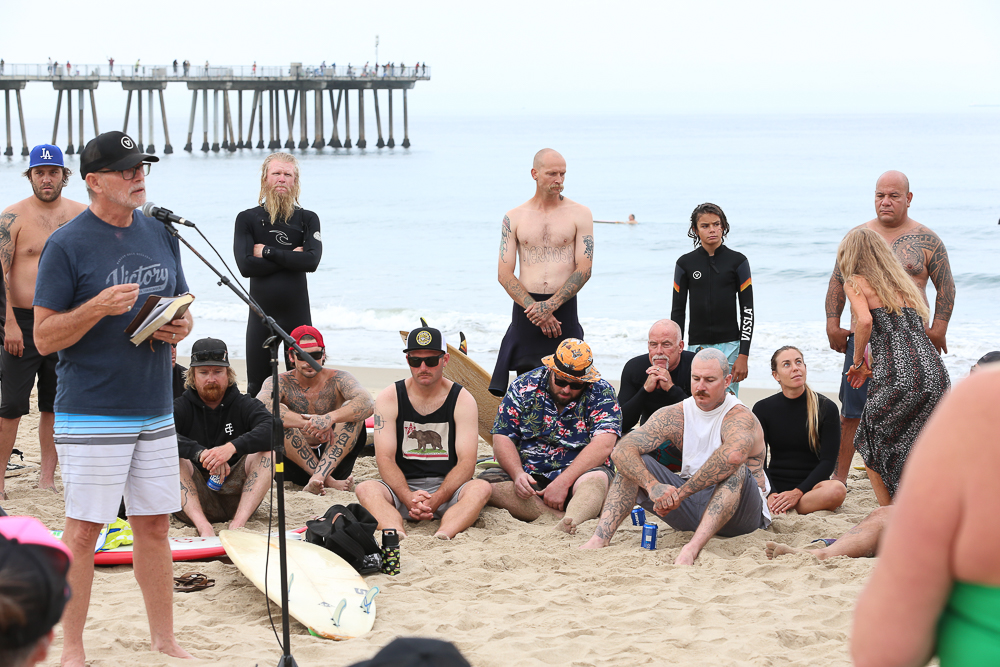 Editor’s note: Steve Vargas, a lifelong friend of Andrew Ryan, delivered the following eulogy at Ryan’s memorial paddleout Saturday morning on the beach at 14th Street in Hermosa Beach, where Ryan grew up surfing. Ryan took his own life on Thursday, June 9. He was 35. The punk song “Bro Hymn,” from which Vargas quotes in his eulogy, was written by Pennywise bass player Jason Thirsk, who also took his own life, in 1996, at age 29.

As the memories of our childhoods, and the times we spent hanging out continue to flash through my mind, I replay the song once again.

To All my friends, present past and beyond/ Specially those who weren’t with us too long/ Life is the most precious thing that you can lose.

Ever get that feeling you can’t go on/ Just remember whose side it is that you’re on/ You’ve got friends with you till the end. 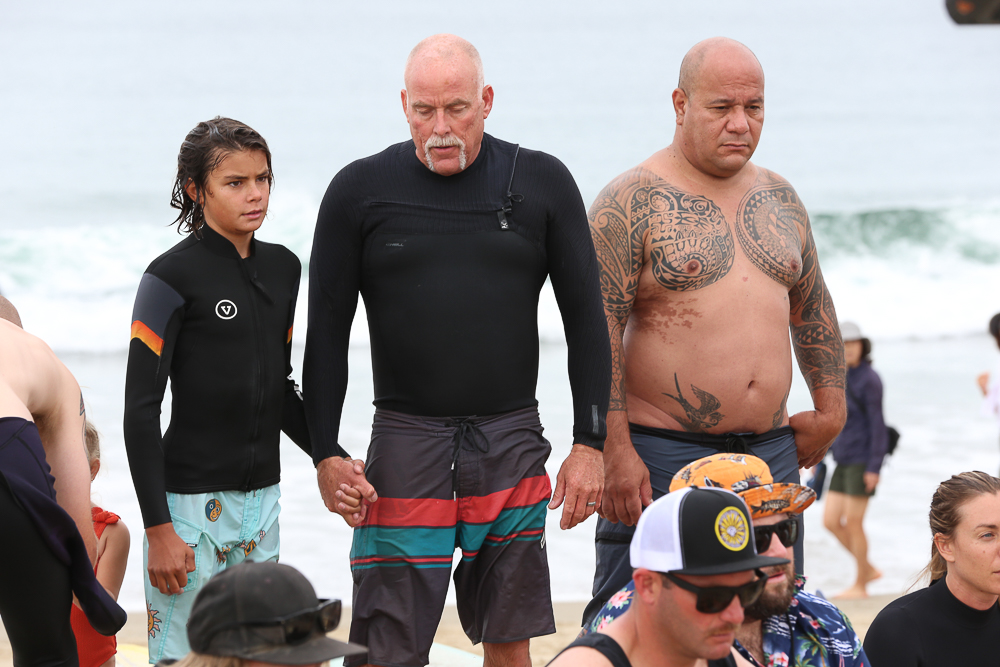 Elias and Ian Mozian and friend..

Sure, people grow older, and we go our separate ways. But Andrew, and I never stopped being friends. You can’t just take away the memories of the formative years where all the good, and the bad parts of life become reality. It’s an experience and closeness that is as thick as blood.

If you’re ever in a tough situation/ We’ll be there in no hesitation/ Brotherhood is a rule we cannot bend.

My friend is gone. He took his life, and I failed him. We all failed him.

With all the life experiences I have today, I wish I could have transmitted some wisdom to you, Andrew. I wish I wasn’t so distant. I wish I could have shown you what the other side, past the feeling of hopelessness, looks like. But I was too far away, not just physically, but mentally, as well.

I’m bombarded by these thoughts as a shout from the top of my lungs the wailing cry of this chorus. I’m pissed. I’m pissed because I know what it’s like to be stuck, like Andrew was. But I also know there is a different path.

I’m balling my eyes out during the next verse.

If you’re feeling too close to the bottom/ You know who it is you can count on/ Someone will pick you up again.”

But there’s been too many times where we picked a brother up when he’s down, and we’ve given him the wrong remedies, the wrong solutions, the wrong kinda fix…. The same ones we are taught, ignorantly, and carelessly about. A drink, a drug, to not feel the pain. That pain that takes over our lives if we keep pushing it down. But that’s what we offered Andrew. We picked him up, and gave him that poison.

We can conquer anything together/ All of us are bonded forever/ If you die, I die/ That’s the way it is. 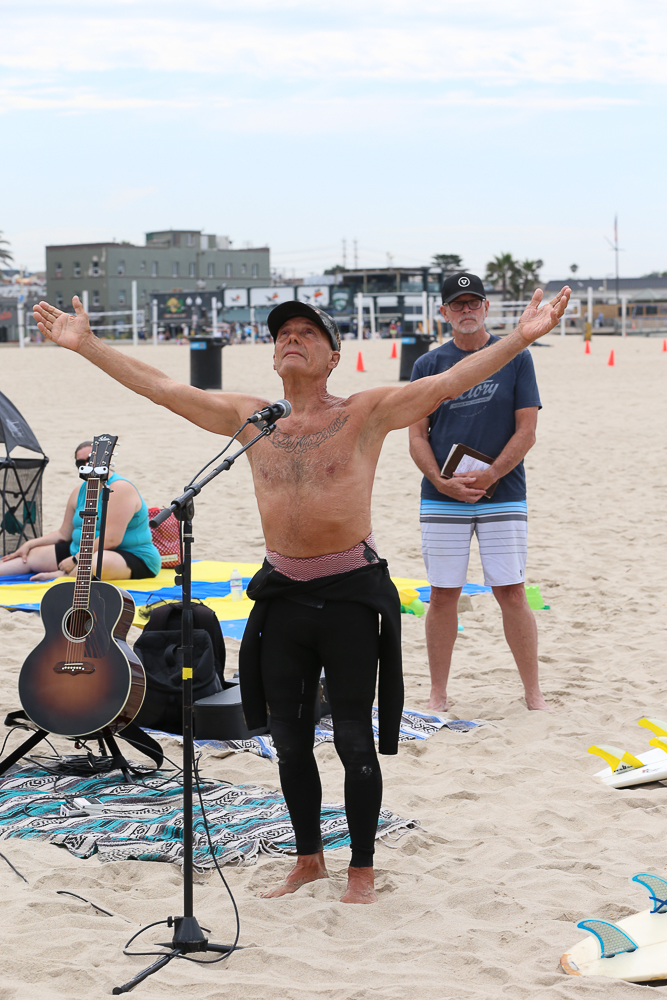 A piece of me died on Thursday, June 9, when Danny called to tell me our beloved brother Andrew died. He told me what had happened, but it was unthinkable that the thing Andrew, James, Danny, Kenny and myself had discovered as being the craziest thing to do as kids — climb the light tower at Clark Baseball Field and shotgun a beer as a right of passage. Decades later, it would be where Andrew decided to commit the ultimate sacrifice. It’s baffling, but I get it.

When Babe Ruth visits Benny ”The Jet” Rodriguez in a dream, he says, “Heroes get remembered, but legends never die. Follow your heart kid, and you’ll and never go wrong.”

Well Andrew, my brother, today you get to be both. You get to be remembered as a hero for holding true to what you believed in. And today I nominate you as a legend that will never die. We will tell our stories about Andrew Patrick Ryan, the savage Hermosa Beach local and the way we lived as kids in that house on 8th and Cypress. You will live on forever, in glory.

Today we memorialize our Brother Andrew, born March 2, 1987, a true Hermosa Beach local with more might and more clout in his claim to this tiny town than most of us here today will ever have.

My guess is he knew he was the last of our kind. He knew change was coming, but that it would be too difficult for him to make the switch. He was in total control over when the game was over.

I say this to us all:

“I wish I could have …” is only just a statement, so save it. Save it for someone who is still suffering and make that “I wish I could have” a reality. Look at the people around you today and think about the way you are carrying the hope and camaraderie to others. Make sure it’s an idea founded on righteous intentions for longevity, rather than some short term satisfaction. Question yourself next time the universe presents you with the opportunity to be a pillar of hope and maybe, just maybe, Andrew’s fate might not be repeated by someone else we love.

To all my friends, present past and beyond/ Especially those who weren’t with us too long/ Life is the most precious thing you can lose/ While you were here, the fun was never ending/ Laugh a minute was only the beginning/ Andrew Patrick Ryan, this ones for you. ER