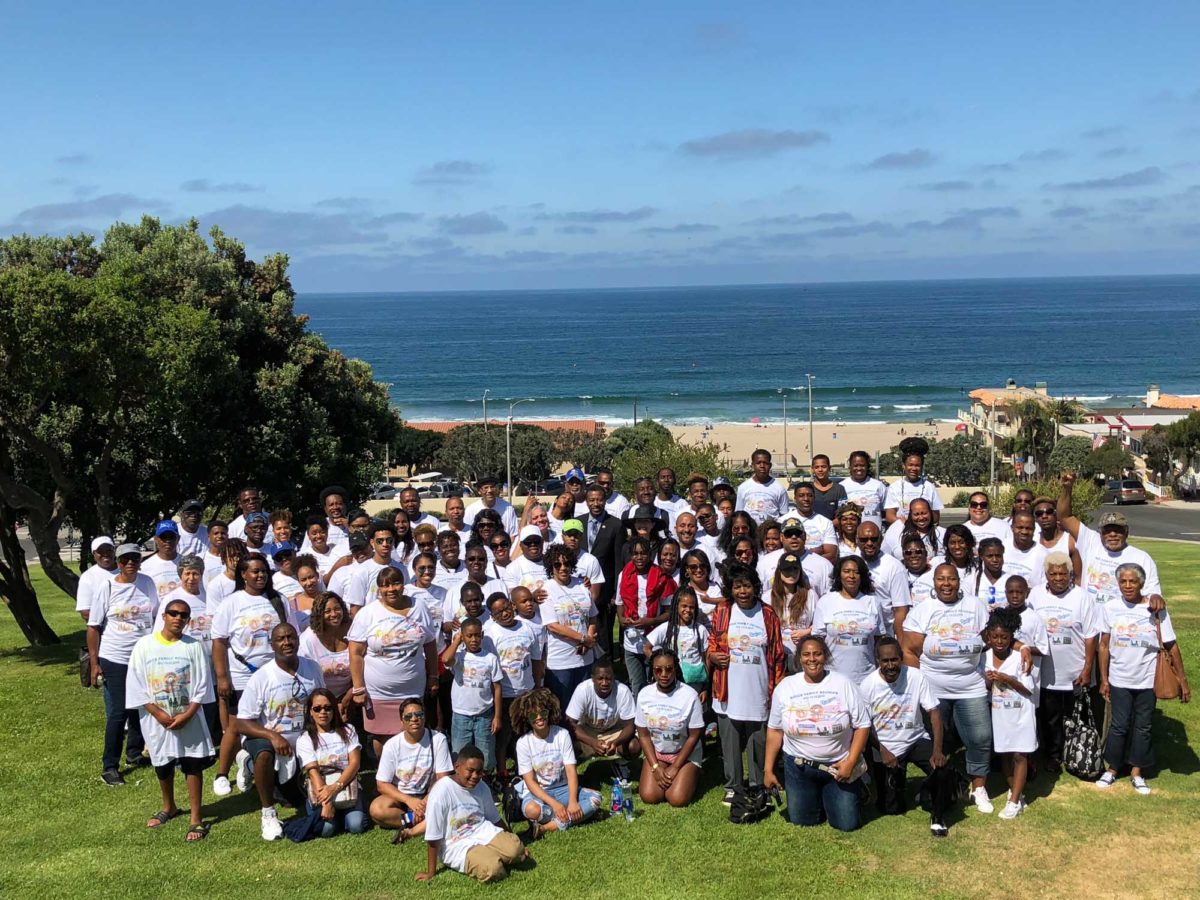 They came from Texas, Kansas, Arkansas, Florida, Michigan, and the District of Columbia. A few arrived from Northern California, and several just drove down from Los Angeles. Most had never seen the hallowed plot of land their family proudly owned in Manhattan Beach nearly a century ago, but they’d heard the story of Charles and Willa Bruce, who built a beautiful oceanside resort for African Americans only to face threats from the Klu Klux Klan and the finally the taking of the land by city fathers in 1924.

But on a beautiful Saturday afternoon in July, more than 130 members of the Bruce family congregated at Bruce’s Beach and felt more joy than sadness.

“It definitely was bittersweet,” said Patricia Bruce-Carter, who organized the family reunion. “It was a sad story because I understand there were other blacks and they just moved down the street —  there was a place where they could go and live. But the Bruces were like, ‘The hell with you. We are getting out of here.’”

“It’s unfortunate. A lot of that went on during that time,” she said. “Of course, everyone knows that was a while ago, and of course, you still have your prejudices. But you have to keep a positive attitude. You can’t let that get in the way of your life because you will just shorten your life if you meditate on that.”

Mayor Amy Howorth and former mayor Mitch Ward were at the park, now known as Bruce’s Beach, when the family arrived for its reunion on July 14.

“Two buses pulled up and people just spilled out —  all these joyous, shouting kids running around,” Howorth said. “It was awesome because the place was just filled with descendents of the Bruce family. It was just super cool.”

Ward was almost single-handedly responsible for the City Council’s decision to rename the park, which for decades was known as  Bayview Terrace Park and then for a few years Parque Culiacan —  names which also whitewashed the property’s tangled history. In 1912, the year of the city’s incorporation, developer, and city founder George Peck went against local norms of racial exclusion and set aside two beachfront blocks for purchase by African Americans; Peck likewise developed Peck’s Pier, off 34th Street, which was among the only piers on the Southern California coast open to blacks. The Bruces newly arrived from New Mexico, bought the Strand-front property for $1,225; they established an inn called Bruce’s Lodge, a cafe, and a dance hall. The area became known as Bruce’s Beach, one of the few places on the coast where black families could vacation. It was a place of great celebration among Los Angeles African American community, thousands who regularly rode the Red Line south to enjoy time at the beach. But some local white residents objected, and a KKK chapter reportedly attempted, unsuccessfully, to burn the resort to the ground. Residents petitioned against the development, and in 1924, city trustees voted to use eminent domain to seize the land, ostensibly to make it a city park. No park was built on the property for the next 30 years.

In the summer of 2006, after a Leadership Manhattan project revived the park’s history, the council considered renaming it to more fully convey its history. At a July meeting, Ward, the first and so far only African American elected official in city history, found himself the only member of council in favor of calling the park Bruce’s Beach.

“I’m a minority up here in more ways than one,” Ward told his colleagues, recalling how much it meant to him when he became a property owner in Manhattan Beach. “I feel bad this council does not have the foresight of Charles Peck.”

Ward was able to turn the tide, and in March the following year, the Park was renamed in a ceremony at Bruce’s Beach. Bruce-Carter, a distant relative of Charles and Willa Bruce, said that day remains one of the most meaningful in family history.

“I was there for the ceremony with one of my daughters and two of my grandchildren,” she recalled. “That was a beautiful day. It was almost like God came down and sat on the grass with us. A day to remember.”

Eleven years later, the larger Bruce clan had another beautiful day. Most the family were staying at the Four Point Sheraton in Culver City; they chartered two buses that Saturday and toured some of LA’s iconic spots —  including the Forum, Hollywood, Venice Beach — before arriving to Bruce’s Beach Saturday afternoon.

“Because most the relatives, they’ve heard of Bruce’s Beach, but this was their first chance to use it personally,” Bruce-Carter said. “It was a really big deal, and people love it. That’s a beautiful spot in Manhattan Beach.”

Howorth wrote about the reunion in her weekly newsletter and said it was the most response she’d ever gotten.

“I was surprised so few people remembered [the history],” she said. “I think it resonates because we live in divided times, and there are lots of arguments over monuments and about how to live with uncomfortable history. Something like the renaming of Bruce’s Beach speaks well of a community that is willing, to be honest. And maybe part of that also comes from understanding the history, thanks to the efforts of people like Jan Dennis and the Manhattan Beach Historical Society. This is a part of our history; this is how it was. We should not be proud of what took place, but in this way, we can acknowledge the good of what was there, and acknowledge the African American history right here in our midst. If we understand that, and what happened at the beach, we can learn from it.”

Ward will be honored at the next council meeting, on August 7, for his role in bringing this history to greater light.

“Mitch has a legacy,” Howorth said. “If I could go to bed at night and say Bruce’s Beach was my legacy, that would be a really good legacy.”