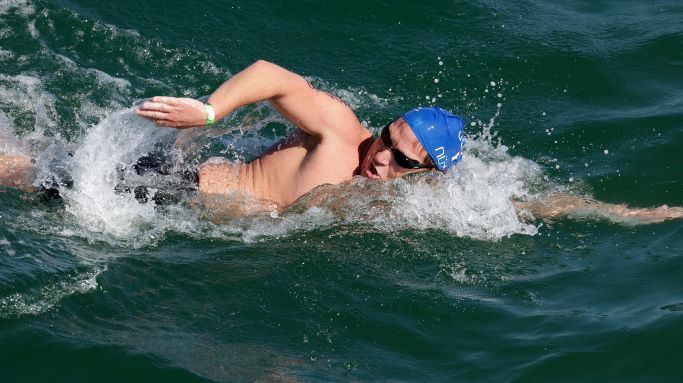 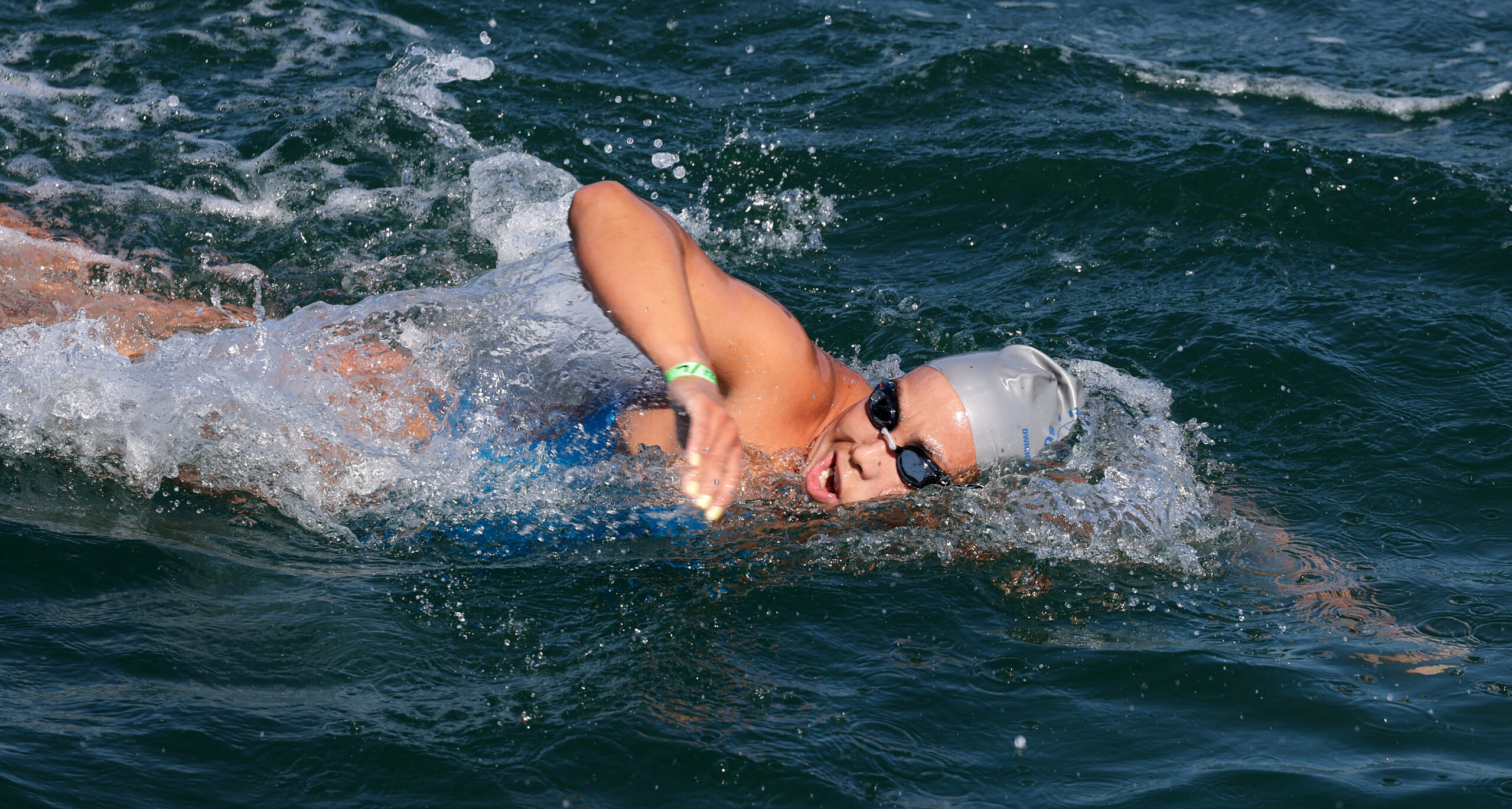 The big digital clock at the finish line of the Dwight Crum Pier to Pier race read 1:36 when Brooke Nojina of Hermosa Beach half-walked, half-stumbled through the narrow trailway to the holding pen just north of the Manhattan Beach pier.

When she was about 10 feet up the fenced-in trail, her two children, Kainoa and Keina, excitedly ran up to greet her.

“Mom, mom, congratulations,” son Kainoa yelled, trying to catch her attention. “You made it. You finished the race.”

Then he proudly let slip a stunning revelation.

“She just started swimming seriously a few months ago,” he confided.

His sister chimed in: “We’re really excited and proud of her.”

For her part, Brooke, 42, a bit woozy after her herculean effort, said it was a dream come true.

“I just wanted to finish the race,” she said. “I can’t believe I actually did it.”

She had started training for the 2.2 mile race a couple of months ago at the urging of some swimming friends. She had been doubtful that she could swim the 2.2 miles from the Hermosa Pier to the Manhattan Pier without the fins she got used to during her early  training sessions. But when she finally completed a practice pier-to-pier swim without the fins she decided to enter her first swim race ever.

“I said to myself, okay, I can do it now that I’ve done it without fins,” she said. “So I entered the race on the very last day you can register…. And now I feel so good.”

That triumph of the human spirit over physical obstacles and mental doubts is what the 60th running of the Pier-to-Pier race is all about.

Oh, sure, Ryan Bullock and Kelsey Cummings won the overall race in the male and female divisions as usual – both LA County lifeguards have been dominant for most of the last decade. But the scene with Brooke Nojina and her family was repeated with endless variations over more than two hours Sunday morning.

Everywhere you looked swimmers were celebrating their achievement under blueberry skies and a relentless, broiling-hot sun. Intoxicated by the endless endorphins generated by their struggles in the churning ocean water, exhausted-but-exhilarated swimmers staggered onto the beach, and climbed their way up the beach-front berm like Teddy Roosevelt charging up San Juan Hill. Many of them stumbled and fell but got up and kept going, then hurtled themselves into the eager arms of waiting friends and family.

Race announcer Dick Douglas, who has called every Pier-to-Pier race since 1981, used his microphone to keep reminding everyone of the more than 1,300 entrants from 35 states what a major accomplishment they had just achieved.

“Look at all these people coming up the hill on the final sprint,” Douglas said from his perch above and to the right of the finish line. “What a great sight. Every one of these racers gave it their all. You just swam two miles and you’re right to feel good about that.”

Indeed, they were all feeling good as swimmers as young as an 8-year-old girl and as old as an 81-year-old man emerged from the choppy water and raced up the shoreline towards the big red finish line, each of them wearing an ankle bracelet programmed to record their time as they crossed the final electronic barrier.

In its own way, Bullock’s story after finishing with a time of 38:11 – well over his course record of 35:42, set in 2019 – is just as inspiring as Nojina’s never-too-late-to-start-swimming story.

A licensed audiologist back east, he traveled to La Jolla, near San Diego, more than a decade ago for an audiology conference.
“Right then I knew two things, that I wanted to live in Southern California and that I wanted to be my own boss,” the 38-year-old Arkansas native said moments after winning the Pier to Pier for the seventh time in the last eight years it has been held (it was canceled in 2020 due to the pandemic.)

Today he lives in Redondo Beach, has a solo practice in San Pedro called Harbor Hearing and gives himself whatever time off he needs to train with the Los Angeles Peninsula Swim Club at the Plunge in Torrance.

Kelsey Cummings, who won the race for the fifth time in the last six years, said the conditions were worse than usual.

“It was really choppy out there,” the 29-year-old said, moments after emerging from the water with a time of 39:52.

She too credited her master’s swim club with keeping her sharp enough to dominate the prestigious Pier to Pier race. 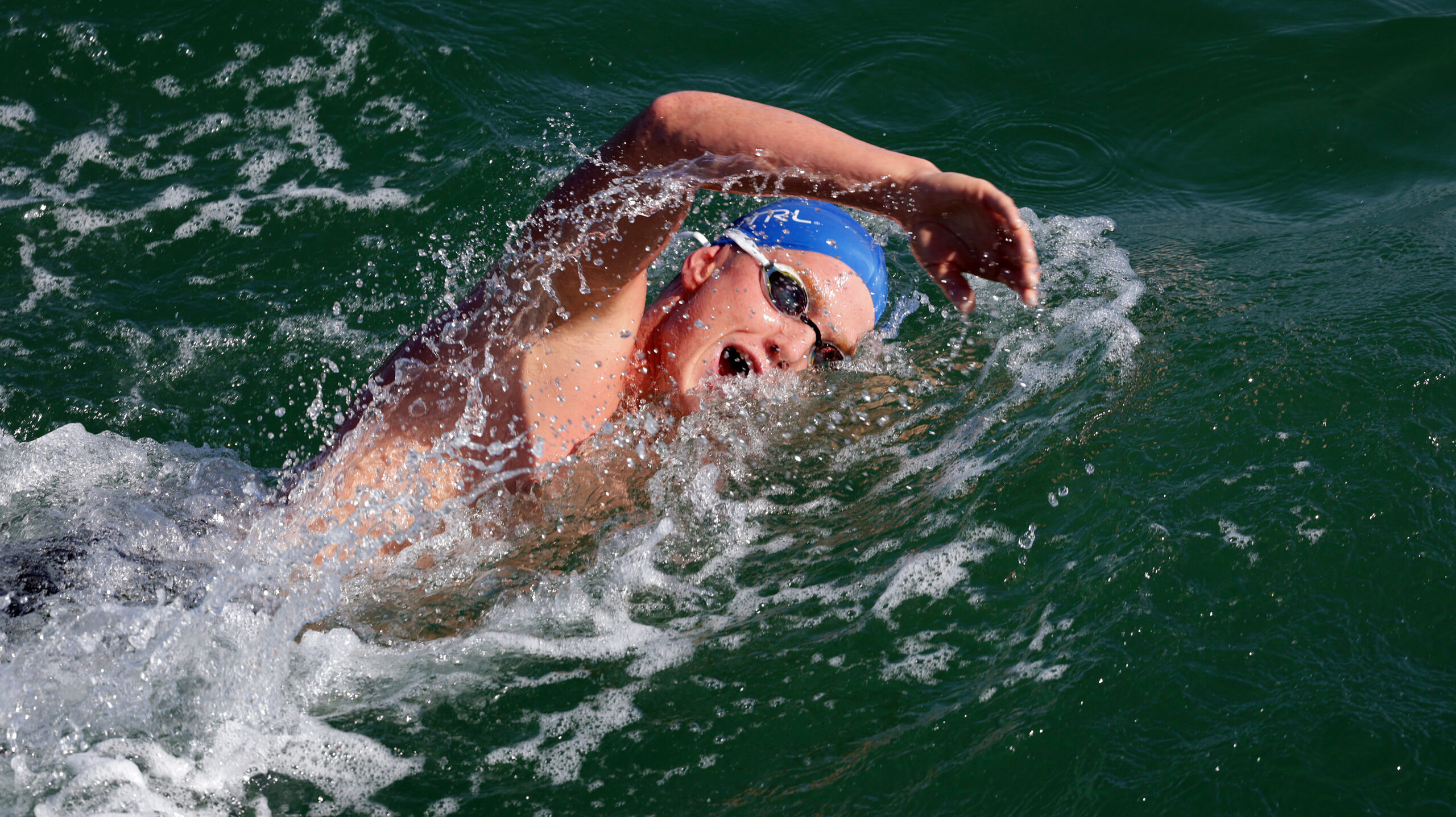 Alexander Cole, 17, a senior at El Segundo High, finishes second in the Dwight Crum Pier to Pier Swim, in a time of 39:09, less than a minute behind Ryan Bullock’s winning time of 38:11.

While stories of perseverance and resilience were everywhere in the post-race gatherings of competitors and their families, no one got more love and respect from swimmers and fans alike than Steve Hyde.

The 73-year-old Masters swim coach showed up promptly at 9 a.m. so he could get a front row seat at the finish line. He had dozens of former students in the race, and he himself had competed in the race many, many times over the year, including 2020.

But last fall, on his way to an open water race in Oceanside, he suffered a stroke that has affected his ability to walk and talk. His son Jason was at his side Sunday, making sure that he was comfortable and that he could be understood by the long line of people who came by to pay their respects and thank him for all he had done for the swimming community over so many years.

As the liquid line of swimmers snaked its way around the Manhattan Beach Pier and headed in a final sprint for the shoreline, he was asked who he was rooting for to win the race.

He pointed to the crystal-blue ocean stretching over the horizon and murmured one word: “All.” 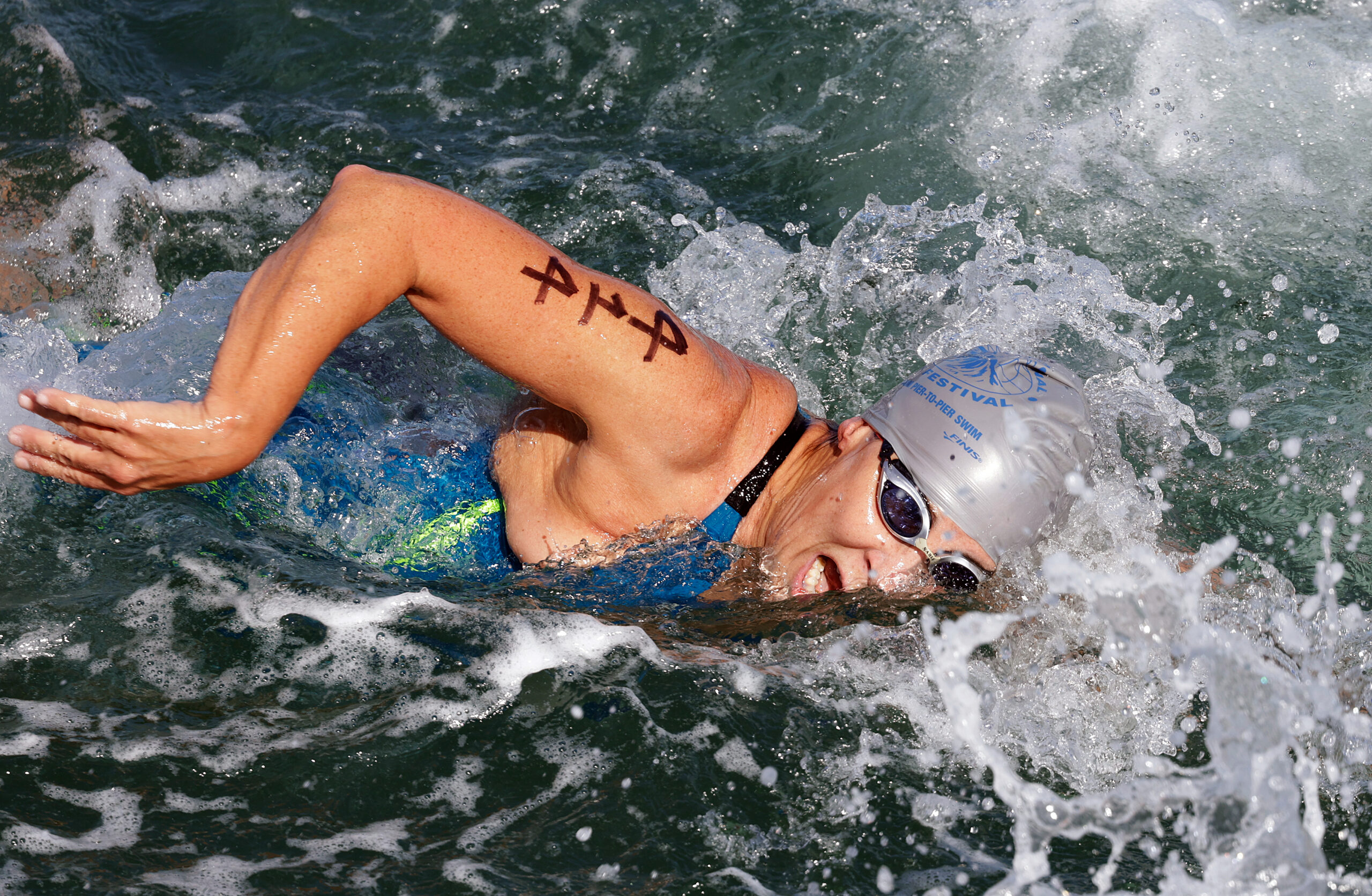 Amy Dantzler placed first in the 55-59 women’s division and was fifth overall in a time of 1:23. 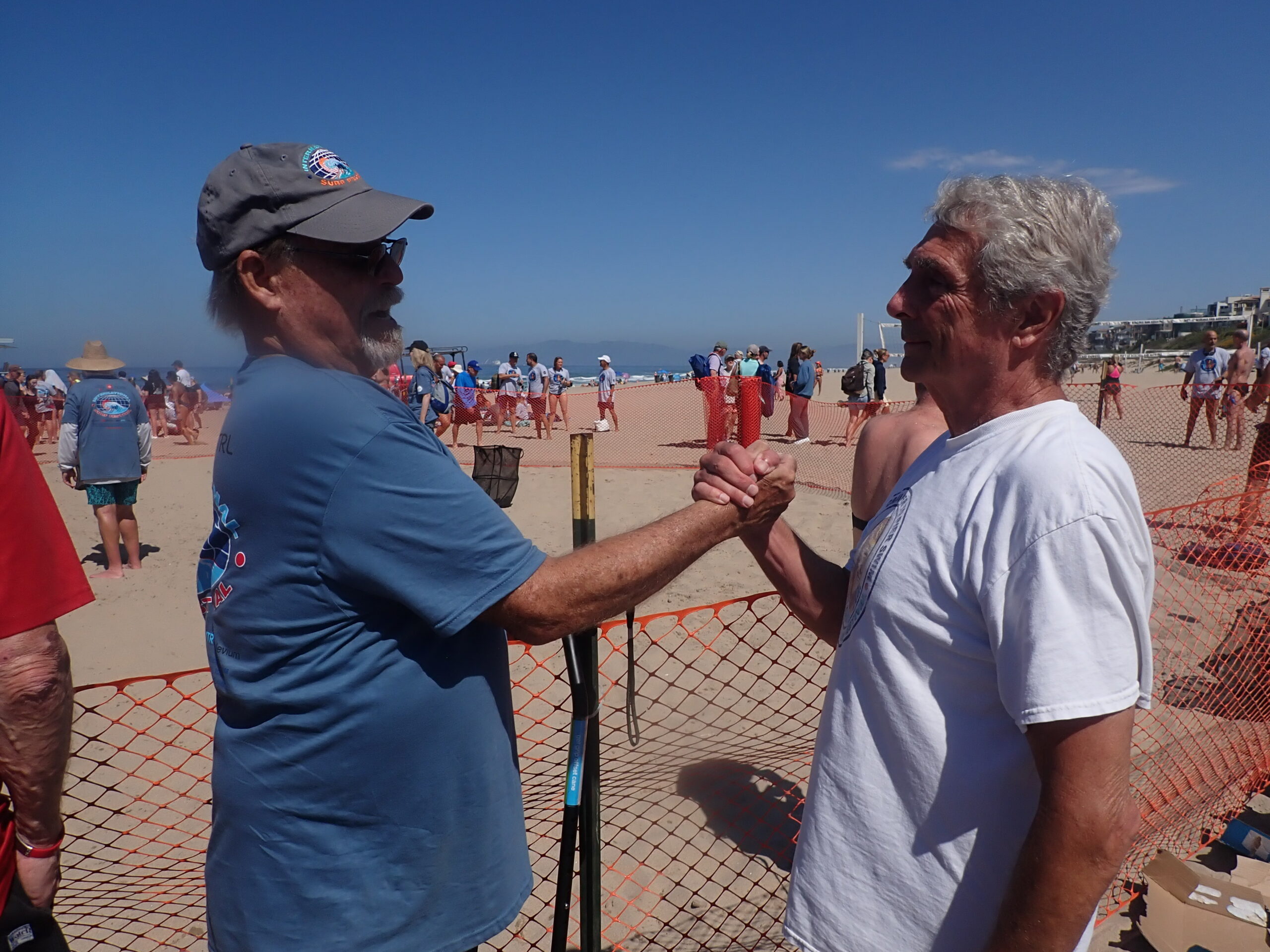 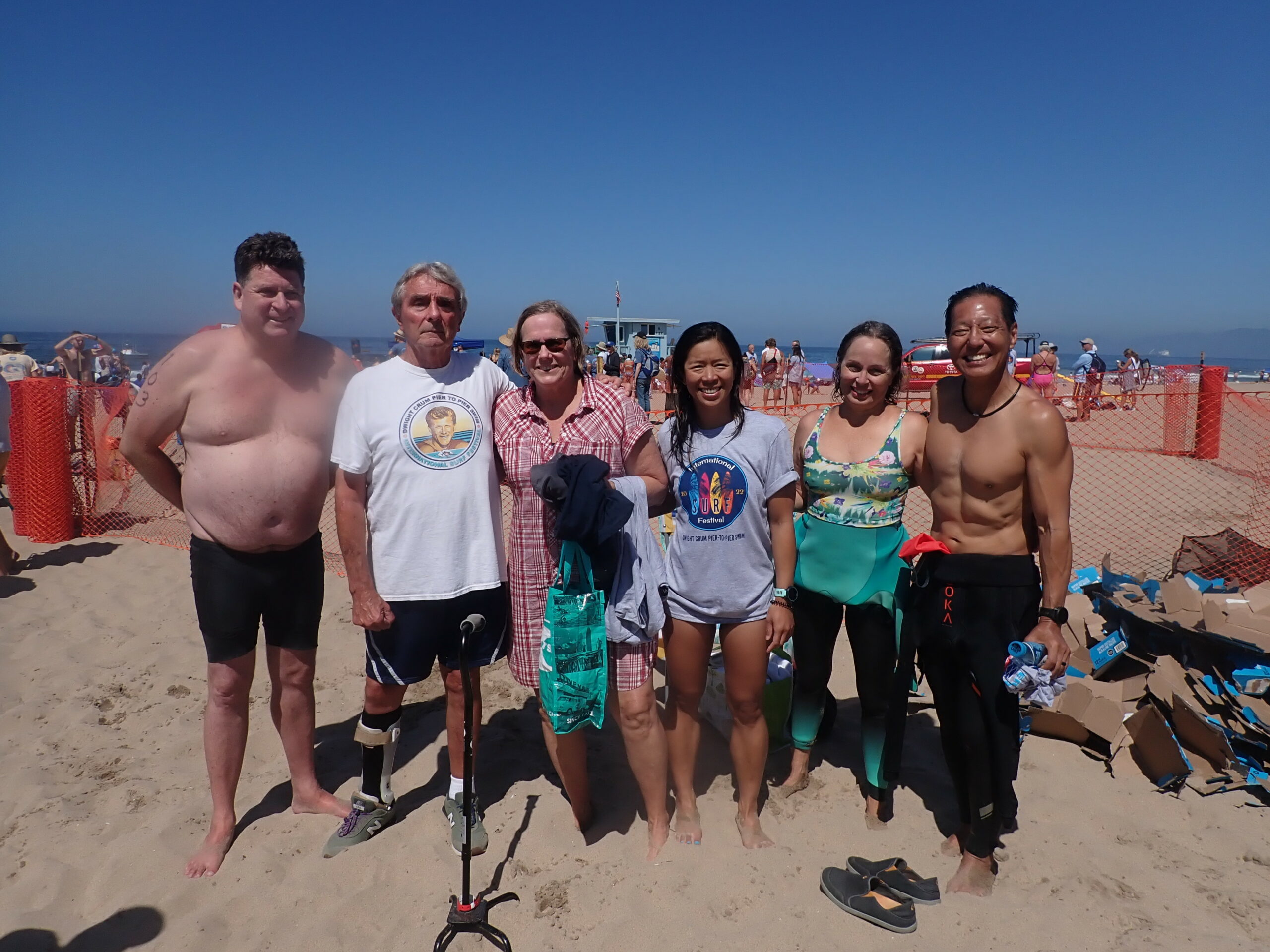 SOBA swim coach Steve Hyde with some of his swimmers at the finish of the Dwight Crum Pier to Pier Swim (left to right) Dave Neilan, Beverly Baird, Kylee Timso, Janna Colaco and Al Agena.