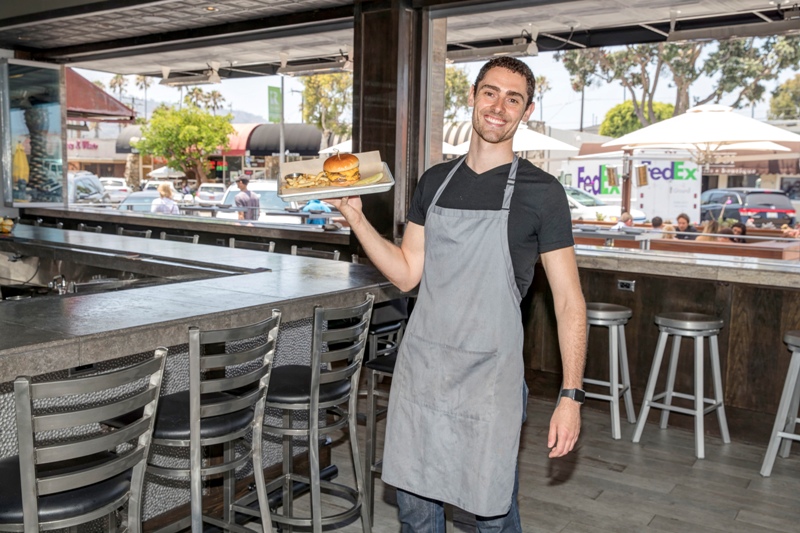 Rebel Republic’s Matthew Konen with a Rebel burger. The restaurant’s rebranding and its sidewalk dining have helped reinvigorate dining in Riviera Village. Photo

Like clockwork, the incredible weather has brought thousands of residents and tourists out to local beaches, marinas, and piers. Hotels and restaurants continue to fill up in areas like south Redondo Beach, with its unique and diverse offerings. When businesses succeed, investors take notice. But a limited amount of commercial property on the market has compelled investors to find more creative ways to succeed on the waterfront and in Riviera Village.

The good news for Redondo Beach is that sales tax revenues have been increasing by over 5 percent annually for the past five years. Residents are winning as well, with single family home prices south of Torrance Boulevard growing at a pace close to 9 percent annually over this same timeframe. Commercial lease rates have been climbing at an even faster pace.

Harbor Drive has changed substantially. The removal of the Herondo wall on the Hermosa border and the widened bike path have opened up access to the area. The addition of Shade Hotel and the substantial remodeling of The Redondo Beach Hotel, Portofino Hotel & Marina and the Crowne Plaza have boosted occupancy and room rates there. Chart House and Bluewater Grill continue to perform well and Kincaid’s and Cheesecake Factory remains top-performing, local restaurant.

Harbor Drive and the pier area may see even more dramatic change with the 50-acre AES power plant real estate in play and the possible redevelopment of the waterfront. It is unclear how these two projects will evolve over the next few years, but if developed, there is no overstating their impact on the business community.

The Pacific Coast Highway corridor and the Riviera Village are also undergoing changes, though incrementally. The success of Rock and Brews with their opening over four years ago appears to have been a catalyst for some of the change. Since then, the Village has seen the addition of four Italian restaurants and the popular Suburbia. Mickie Finnz rebranded to Rebel Republic with success, especially after the addition of an experimental outdoor dining deck. The Source and Chicago for Ribs will be opening soon.

Zazou has been prosperous on Catalina Avenue for 20 years. Nonetheless, they decided to make a major change after noticing that many locals go to other beach cities for dinner. Sara Gabriele, co-owner of the planned new restaurant, said they want to “tap into a younger clientele that appreciates high quality food in a laidback setting.”  Zazou will close at the end of August and the new concept will open within a few months.

After over 20 years in Manhattan Beach, Chris Davidson of Mama D’s made the decision to open up at the former Thai Thani restaurant on Pacific Coast Highway  earlier this year. Business has been so good for them there that he shared he “regrets not opening up in Redondo a long time ago.” Their success prompted him to start opening for lunch this weekend. Davidson appreciates the fact that “so many people walk to the restaurant from their homes,” which reminds him of “the good old days of families having fun together”.

Long-time resident Barbara Reger picked up on the desire of other locals for “something different” and decided to take over the former Snow Zone spot on Pacific Coast Highway. The remodel for this Napa-inspired crafted barbeque eatery and market begins tomorrow for an opening in a few months.

Tony Cordi can be reached at tony@theinnategroup.com.