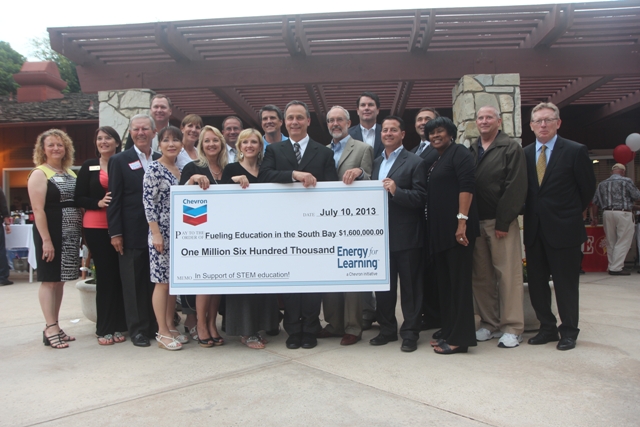 Chevron last Wednesday hosted what has become its annual mixer for the El Segundo and Manhattan Beach chambers of commerce. But the event, held at Chevron Park near the El Segundo refinery, included one very unusual element in the mix – the company announced it would give $1.6 million in grants to local Science, Technology, Engineering, and Math (STEM) education programs.

“Education is fundamental to maintain our state’s competitiveness,” Semanicik said. “And as a California company we take great pride in our local STEM partnerships.”

“As superintendent of El Segundo schools, I feel it’s only fair, in the spirit of full disclosure, to admit we have home court advantage when it comes to Chevron,” he joked, noting that since 2009, Chevron has “single-handedly invested $1.3 million in El Segundo students,” notably transforming the high school’s woodshop into a state-of-the-art modern engineering lab in which 300 students each year “put into practice their love of science, technology, engineering, and math.”

Not coincidently, El Segundo engineering students have won national robotics competitions, and Chevron has itself hosted a “Real World Design Challenge” that has helped make El Segundo an epicenter of sorts for science learning.

“As if all this were not enough, Chevron’s contribution supported the development of the district’s virtual environment, allowing students to access applications from outside the network and build a wireless infrastructure in preparation for the transition from text books to tech books,” Yantz said. “In short, not too bad for the big kid down the block, who always is keeping an eye out for all the kids on the block.”

Mike Matthews, superintendant of Manhattan Beach Unified Schools, noted that nearly every area superintendent was at Chevron Park for the mixer.

“As a superintendant of schools, I’ve had a chance to work around many places, and I’ve seen a lot of businesses who have promised to [support] the schools,” Matthews said. “But I have never seen anybody, or any organization, quite like Chevron. That is why every superintendent is here….We are all here because we believe so much in what Chevron has done. They make a true difference.”

Matthews said that dollars invested in local schools reverberate far and wide– such as the team of Mira Costa students whose experiment was performed on the Space Shuttle last year. He also echoed Yantz’s comments regarding state budget cuts.

“The state has left us in the dark in many areas, but thanks to Chevron, they have single-handely transformed us,” he said. “We have visitors from around the state, around the nation, and from other countries around the globe visiting Manhattan Beach, saying, how are you using this technology? How did you get the [resources] to do that? And the first thing we say is, ‘Because of Chevron.’ We are a national leader in technology because of Chevron, and we are proud of that.”

“If all companies operated like you, it would be a better world for all our kids.”

“Join me,” he said. “Give these incredible educational leaders a well-deserved round of applause for all they do in building tomorrow’s leaders.”

“It’s hard to express,” Fisher said. “I mean, it’s amazing what Chevron has done over the years. They are a great community partner in El Segundo, but look what they are doing for the whole South Bay.”

“They are walking the walk. They are the pacesetter.”