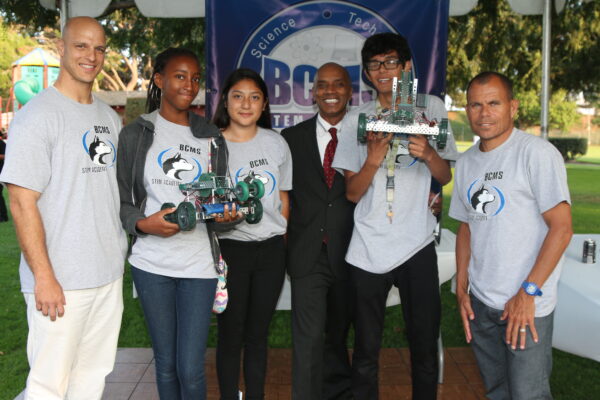 Bud Carson Middle School principal Mark Silva and his students brought robots they had built in class to Chevron Park in El Segundo last Wednesday. They were at the park to express their appreciation for the $90,000 check the refinery presented that afternoon to Hawthorne Superintendent Dr. Helen Morgan for her district’s middle school STEM (Science, Technology, Engineering, Math) programs.

“Building robots designed on computers, performing medical detective work, working with 3D printers and  space simulators — none of this would be possible without Chevron’s support,” Silva said. 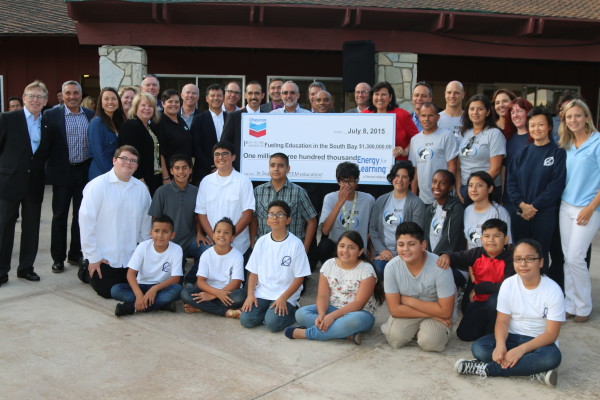 During his thank you to Chevron, Wunder noted that the country will need four million more engineers simply to take the place of retirees among “the graying engineering workforce.”

He said that DaVinci Schools are addressing this need, in part, by encouraging girls to study science.

“Girls lose interest in the sciences in the third grade unless they are encouraged. DaVinci’s first two valedictorians were girls. One went to Brown and the other to Stanford,” he noted.

Chevron El Segundo has contributed $1.3 million during the current school year for STEM programs at 16 South Bay school districts. It has contributed over $8 million to local schools in the past six years. ER