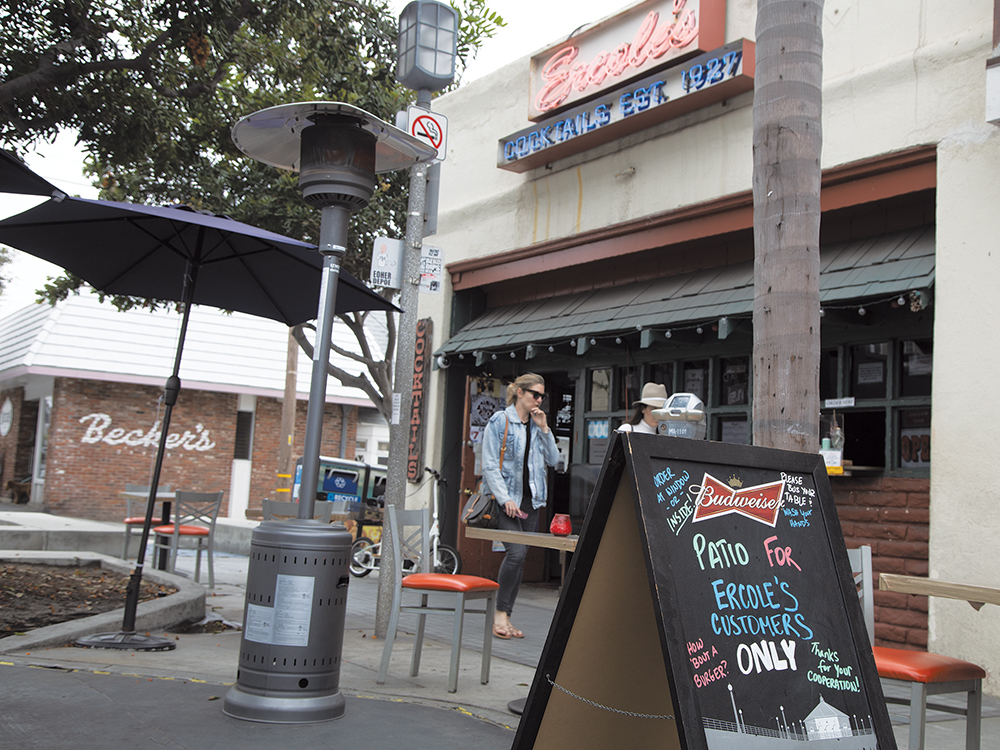 Ercoles outdoor dining is maybe the simplest of all the “parkettes” granted by the City, but its owners say it has been essential to the Manhattan Beach institution’s survival during the pandemic. Photo by Kevin Cody

The Manhattan Beach City Council spent much of the last 14 months grappling with how to handle the pandemic locally. Now, as the pandemic wanes but its impacts linger, the Council is faced with a new set of challenges.

On Tuesday night, at its first meeting conducted in-person since March of last year, the Council considered charging local restaurants $4 per square foot for public right of way “parkettes,” used for the construction of outdoor dining decks during the pandemic.

The concern that compelled the discussion wasn’t just financial, although a staff report indicated that the City is losing $734,597 annually due to the 78 parking spaces taken from public use by the dining decks —  a figure that includes parking fees, citations, and ongoing maintenance expenses.

The other issue is that, absent a per square foot fee, the use of the public right of way by restaurants could violate California law if it is deemed a gift of public funds.

“No one’s here trying to be an extra burden on business,” said Councilperson Steve Napolitano. “But there is this state Constitution that we’re all under, that requires us to not provide a gift of public funds. And that’s why we’re here tonight talking about this.”

At its last meeting, the Council extended the use of the dining decks for all but those located west of Ocean Drive through Labor Day weekend. The decks west of Ocean Drive, in the pier area, will be closed on July 5, because the City will need those areas for public safety staging for summer events, such as volleyball tournaments.

But since the use of the decks was extended, Governor Gavin Newsom has signaled that full indoor dining will be allowed by June 15. It’s believed that the COVID-19 state of emergency will remain in place, which may give cities cover for the use of public spaces for private use. Additionally, the California Coastal Commission issued waivers for the use of parking spaces in coastal zones for dining decks. How long that waiver will last is unclear.

Restaurant owners, however, told the Council that the pandemic and its effects on businesses are far from over.

“I’d like to have any council member or any citizen who wants to sit down and look through our books see how much money we’ve lost over this period of time and how long it’ll take us to get this money back,” said Ron Newman, co-owner of Baja Sharkeez. “They’ll probably give us free parkettes after we show them everything. I’ve never seen a city that is looking at closing everything down and blaming all the traffic and everything else on the parkettes. What has happened is we were closed and there was no business, and now we are open, and there’s business.”

Mike Simms,  co-owner of Simmzy’s, Tin Roof Bistro, the Arthur J, and MB Post, said that among other challenges, restaurants have not been able to find enough workers.

“I understand that there’s a net benefit for the restaurants. We should incur a price or a fee,” Simms said. “But I’m not going to be able to have a net benefit from outdoor dining until I can get staffed up. Currently we are unable to open two days, Monday and Tuesday, at MB Post because we’re short staffed and we’re unable to open Tin Roof Bistro for lunch business because we are unable to hire. From all indications, this isn’t going to free up until September when the federal stimulus money ends, as well as full time school goes back to back in session.”

Staci Clark from Ercoles said that high end restaurants might be able to afford a dining deck fee, but more humble eateries are struggling simply to survive.

“Just as a small town business, I’m not even sure we would even be able to have a parkette or even be able to stay open at that type of a price,” Clark said. “Our items can’t even compare to the income in the other restaurants that we have. Our meals are $10 hamburgers.”

David Slay, owner of Slay restaurant, said that a lot of customers are still not comfortable dining inside.

“They don’t want to sit inside yet,” Slay said. “They’re not comfortable. We are seeing it every day. There will never be 100 percent occupancy. People will not want to sit on a banquette, three feet away from another table, much less two feet…. We are going into a different time.”

Downtown landlord and seven-decade resident Susan Bale said she felt compelled to make a rare appearance before council to argue for businesses, many whon have had to make rent deferral arrangements to stay afloat. She said some restaurants spent $50,000 to $75,000 to construct the decks, and suggested that if it’s a budget issue for the City that the $6.6 million in federal relief be used in part for this purpose.

“I believe that the way that the city responds to outdoor dining will constitute a critical measure in determining whether this is truly a small business friendly city,” Bales said. “Most restaurants have had less than a handful of good days of operation after one year of either no or limited revenues.”

Some downtown residents argued that it’s time to bring down the dining decks. “It’s now a fact that the restaurants will be able to go back to 100 percent occupancy without any limitations on June 15,” said Carol Perrin, head of the Downtown Residents Group. “This is a very changed circumstance that mandates this council reversing its prior decision to allow the outdoor dining platforms streaming through Labor Day. This major change renders moot tonight’s discussion regarding how much to charge the restaurants for emergency outdoor dining areas. It also can’t be ignored that each restaurant is committed with a maximum capacity limitation, and you can’t have 200 percent capacity, indoor and outdoor…. The council should no longer prioritize the restaurants over the residents and over other downtown businesses and over the devastating effect the platform’s are having on our culture.”

Resident Suzanne Lerner recalled that when she owned a business downtown a decade ago her cost was over $9 per sq. ft. She argued that the decks are degrading the downtown experience for everyone.

One restaurant owner, Bob Beverly of Shellback Tavern, weighed in on the matter via Facebook. He did not agree with his fellow restaurateurs.

“The small town character of Manhattan Beach has degraded into an overcrowded, terrible parking, litter-strewn mess with incredible traffic over the last year,” said Beverly, whose  decks are among those west of Ocean Drive, and thus will come down July 5. “As a restaurant owner I want to say thank you to the residents for allowing us to use public space. Now is the time to return the parking to the residents.”

Manhattan Beach Chamber of Commerce CEO Kelly Stromansaid that no nearby cities with dining decks are dismantling them or charging fees. She also noted that all businesses, including restaurants, will face increased costs with new regulations expected to be announced this month that will require businesses to implement a range of COVID-19  procedures.

“Cal OSHA will be voting in new regulations that will be mandated, and important for all employers to follow, which are going to change the rules of engagement a little bit, once again for employers,” Stroman said. “And the governor is not lifting the state of emergency or the emergency order on June 15. He is just simply changing the blueprint. And LA county will be following that…. So I think that’s very important for people to realize we are not out of this yet. The pandemic is not over. magically, on June 15.”

Mayor Suzanne Hadley said that prior to hearing from businesses over the past week, including a prominent downtown retailer, she had favored implementing at least a $3 per sq. ft. fee. But she changed her mind. She said there was a good reason why other cities are not levying such fees.

“Because I think they know something that we should know: that this pandemic isn’t over,” Hadley said. “We are not out of the woods. This isn’t a giveaway to our businesses. Our businesses are the community that are downtown, and this outdoor dining is what our community wants.”

Hadley noted that City Attorney Quinn Barrow opined that so long as the state of emergency remains in place, the use of parkettes would not constitute a gift of public funds.

“I still think we’ve got to gut this out through Labor Day,” Hadley said.  “I don’t want to nickel and dime our businesses. The hole is too deep, and the challenges are still there. We’re in an emergency order. They have new costs, they can’t hire anybody, and their customers don’t want to eat indoors. So let’s listen.”

“I can’t even imagine, in my personal life and my family’s personal life, what the last year would have been if we had owned a restaurant or business,” Franklin said. “I remember walking through downtown when it was just literally a ghost town. I mean, for months after month after month of just no activity. Bless the hearts of our business owners and restaurant owners. You know, they kept their staff on as much as they could, and they made personal sacrifices and still are…How frustrating to finally get a bit of a green light and you can’t hire enough people to work. I mean, come on —  it’s just obstacle after obstacle.”

Napolitano suggested that given the uncertainty surrounding just what the Governor’s new orders would mean on June 15 that the Council just just wait and see.

“This issue is just one of contradictions,” Napolitano said. “It’s like tonight, right? We say that this is our first post-COVID meeting here in this room, and we’re saying that the pandemic is still going on at the same time. I’ve heard that government and especially us as a city, we’ve been the solution. But we’ve also been the problem. This now presents a problem. I think that I’d like to keep it simple: I’d like to just table this until after June 15 when we know with more certainty what the issues are that everyone is facing, that we know what Cal OSHA comes down on.”

His colleagues unanimously supported this approach and agreed to revisit the matter on July 6. Councilperson Richard Montgomery took exception, however, to any notion that the City had not squarely supported its businesses throughout the pandemic, starting with the loss of $734,597 in revenues and including the loan program it launched to help small businesses. He said this could not go on indefinitely.

“The rules we follow, we can’t pick and choose which ones you want to follow…There’s no clear path here. We’ll table it,” Montgomery said.

“But that doesn’t mean we can disregard our fiduciary duty to everybody else in the city…There has to be risk involved in every business. And somebody to help them out, yes. To a point.” ER