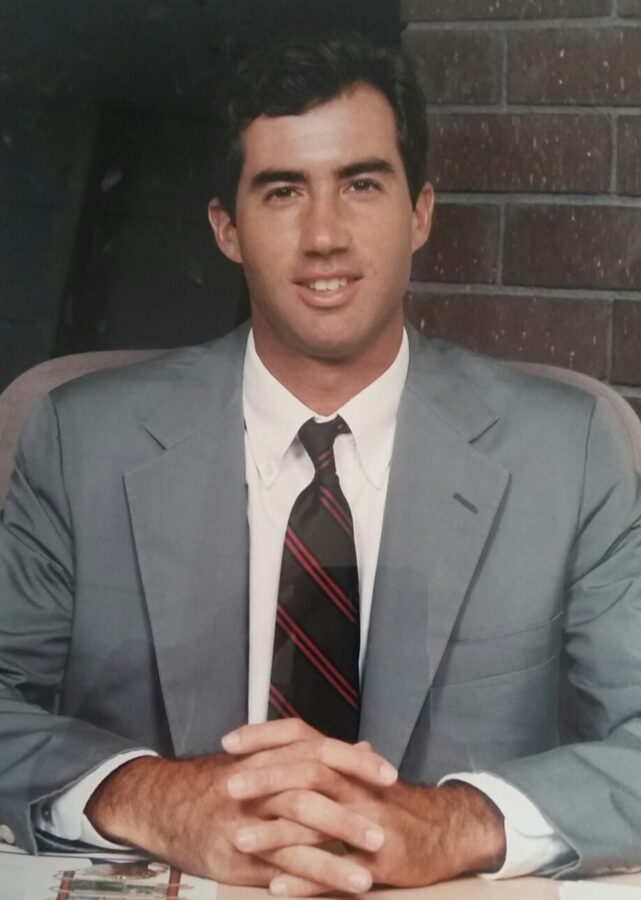 Steve Napolitano became mayor at Tuesday night’s City Council meeting for a record sixth time. His colleagues voted unanimously for Napolitano to take his turn in the mayoral rotation.

“This is where I announce my Sarcasm Initiative,” Napolitano said, moments after taking the gavel from Councilperson Hildy Stern, who served as mayor the previous nine months and led a Kindness Initiative recognizing acts of kindness within the community.

Napolitano was 26 when he was first elected in 1992 and remains the youngest person to ever serve on the council. He initially served three terms, left in 2005 to become a deputy for Supervisor Don Knabe, and then after an unsuccessful run to succeed Knabe was reelected to the council in 2017 and again last year.

Napolitano is an education law attorney and lifelong Manhattan Beach resident. His reason for running for council 30 years ago was to have a say in his hometown, which he saw changing from the sleepy little beach town he’d grown up in.

“I wanted to make sure I had input in the town I grew up in and loved,” Napolitano said after rejoining the council in 2018. “I saw little homes being torn down and big homes being put up, and I thought people weren’t being listened to who were concerned about that transformation.”

“It’s good to be the mayor, not because of any power or glory,” he said. “Anyone who has held this position knows the limits of the title. It’s good because the mayoral rotation is tradition, and it’s good to have traditions. Basically, every council member gets to take a turn, so none of us gets too big a head about the thing. It’s a nice reminder that we’re all here to serve the community, the whole community, whatever title we have.”

If Napolitano’s intentions have not changed, the political arena in which he serves has. It’s something he made note of in his remarks Tuesday, the growingly bitter partisan divide that has emerged in the community. He urged people to see their commonality more than their differences.

“A lot of things have changed over the years, some for the better, some not so much,” Napolitano said. “We will always have disagreements as a council and as a community, but it’s how we deal with them that will define us moving forward. I’ve never been asked by so many people about what can be done to fix the partisan divide in our community. And my answer is always the same. We can accuse, point fingers, and assign blame. Or we can listen, understand and acknowledge. We can hide behind keyboards and computer screens and make endless posts on NextDoor. Or we can meet and talk and hear each other out. We can become more divided or more united. It’s a choice and it’s up to all of us to make the right one.”

Within minutes of Napolitano’s remarks, the public comment portion of the night’s agenda quickly devolved into an outraged fight over Councilperson Suzanne Hadley’s email the previous week announcing her opposition to the Measure A parcel tax. In it, she playfully pictured supporters drinking wine and imagining ways to flummox voters, ending with, “Hand me another beer.”

What began as one caller on Zoom criticizing the tenor of Hadley’s letter quickly turned into roughly a dozen callers, each saying they hadn’t intended on speaking at what was largely a night of celebration with the mayoral transfer, by turns defending and criticizing the councilperson as well as the Measure A campaign itself. One caller suggested Manhattan Beach was veering towards communism. When it ended, Napolitano doublchecked to see if anyone else wanted to speak.

“Anyone else from the public?” he asked. “All right. We’re all coming together.” ER