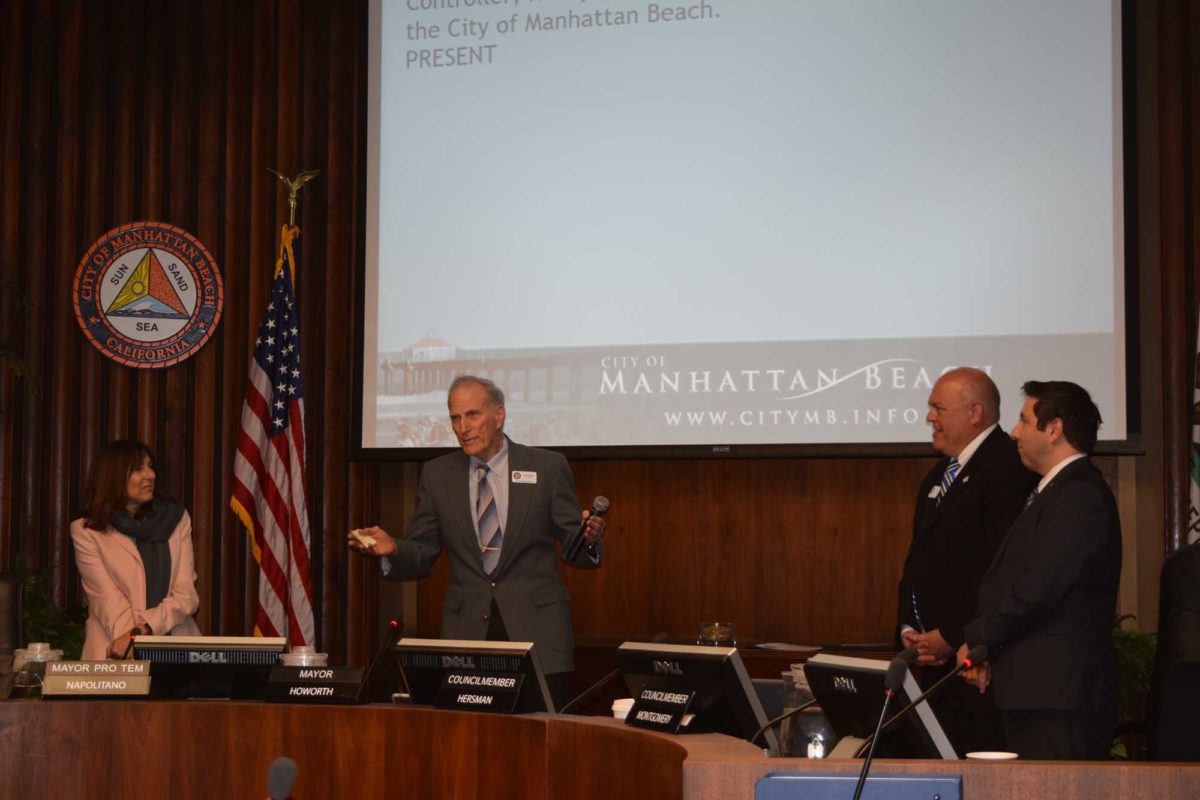 Henry Mitzner (center) says a few words after City Council honored his 45 years of service (and counting) to the city.  Mayor Amy Howorth is on his left and City Manager Bruce Moe and acting finance director Steve Charelian are on Mitzner’s right. Photo by Kendra Davis/City of Manhattan Beach

When Henry Mitzner starting working for the City of Manhattan Beach, Richard Nixon was president, Apollo 17 had just returned from the moon, and City Hall was located in a bunch of trailers. It was March 12, 1973. The city was still rebuilding after the earthquake of ‘71 and the country was in the throes of space mania.

“And we haven’t been back to the moon since,” Mitzner said at the March 20 council meeting, where he was recognized for his four-plus decades of service. “So 45 years is a long time. And I tell you, looking at the council —  I don’t think any of you could have voted when I first came here.”

Mayor Amy Howorth called Mitzner “one of the all-time greats.” City Manager Bruce Moe, who worked 29 years alongside Mitzner in the finance department, quoted one of many “Mitzner-isms” at last month’s State of the City: “When it’s bad out there, it’s good here; when it’s good there, it’s great here,” referring to the local economy.

“I counted on Henry to fill my brain with these Manhattan Beach sayings,” Moe said “But I can’t overemphasize exactly what it’s meant for me to work with Henry. Henry truly has this community’s best interest at heart and is always there to say, ‘I work for 36,000 people and what’s right for them —  not what’s right for me, what’s right for them.’ Henry has got these ethics, this work ethic, this honesty, and integrity that frankly, you don’t get anywhere.”

Acting finance director Steve Charelian said Mitzner has been “someone to look up to” at City Hall.

“You talk about honor, integrity, and your good name, and we live by that philosophy,” Charelian said. “You also taught me the workweek doesn’t end on Friday —  sometimes on Saturday — so I appreciate your work ethic… And I always tell you, you’re still young in your career because you can’t break Vin Scully’s record at 67 years.”

Howorth said longtime City Hall watchdog, the late David Wachtfogel, told her when she ran for office to first talk to Henry “because he knows where the bones are buried.” In addition to a city title and a city coin, she presented Mitzner with chocolate.

“He’s so special, and it’s so special that he’s here,” Howorth said. “… He’s an engineer, he’s a renaissance man, he loves Broadway musicals and Ohio State football, so you know that I’m quite fond of him. But it’s more than just somebody sitting at a desk for 45 years. It is somebody bringing his a game and raising all of us up all the time. And chocolate ice cream, whatever it takes, we’re going to keep you here as long as we can.”

Mitzner said he couldn’t help thinking about all the people he has seen come and go, including six finance directors and nine city managers.

“I think since I came here, something like 5,000 persons has come and gone,” Mitzner said. “I guess I’m still here. I made it through that time.”

He singled out the new city manager for praise.

“I just want to say that I had the pleasure of working with Bruce Moe for 20 years…And I can really say that I would not be here if it weren’t for Bruce,” Mitzner said. “So that’s it.”