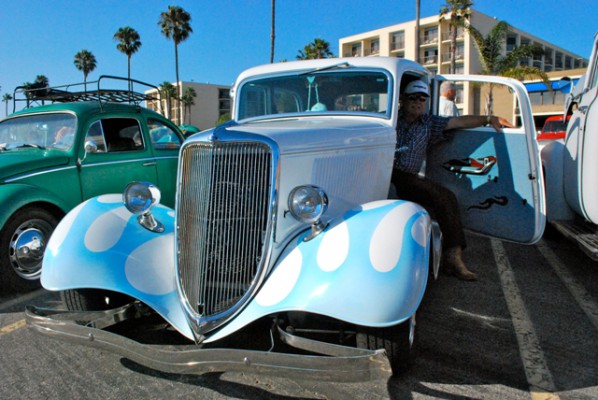 Larry Neville, who organizes "Cruise at the Beach" on Friday night at Ruby's in Redondo Beach, shows off his 1934 Ford Sedan Deluxe. Photo by Carina Glasser

Larry Neville, who organizes “Cruise at the Beach” on Friday night at Ruby’s in Redondo Beach, shows off his 1934 Ford Sedan Deluxe. Photo by Carina Glasser

At 3 p.m. every Friday the parking lot at Ruby’s Diner is transformed into a car lover’s paradise. Vintage Cadillacs, Buicks, Corvettes, and every car in between drive to Ruby’s “Cruise at the Beach.”

The car show began in 1997 with only 12 to 15 cars. Now, close to 250 show up every week. People from across the South Bay come to show off their cars, or drool over something they wish was parked in their garage.

“It’s open to everyone,” said Larry Neville, the car show’s coordinator. “You don’t have to own a pre-1970 to join the show.”

Neville took over the car show in 2003 after helping as an assistant for five years. He has two passions: golf, and his own classic car that he brings down to Ruby’s every Friday.

“I bought it in ‘98 as a rust bucket and it took me almost four years to put it together,” he said. “There were only two years that they made this car with suicide doors, and I have always wanted them for looks.”

When he’s not running the car show, Neville works as a sales representative at Plaza Golf. To pull his love for golf into his car he added a golf club frame around his license plate that reads ‘Larrs34’

“My nickname is Larrbear,” he said, “I even have three paw prints on the back of the car that represent my three daughters.”

All the car enthusiasts that show up share the need to show off their ride.

“You can bring any car you want down here as long, as it’s nice,” Neville joked. “In the old days these cars had personalities – there are muscle cars, street rods, hot rods, and trucks. Each one of them with their own qualities.” 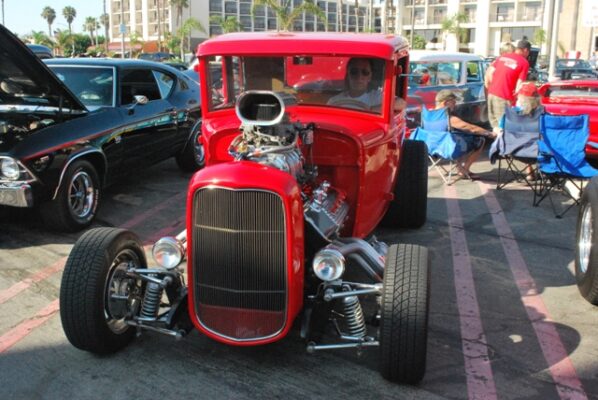 Like Neville, many of the car owners that attend the show have developed an intense passion for this hobby.

“Some of these guys have four or five cars,” he said. “A lot of them built the cars of their dreams.”

“It’s bright, shiny, and loud,” he declared. “I did everything on that car except the paint.”

“I have come to this show since it started,” Desimone added. “We all have a common interest in cars and that makes it pretty fun.”

Desimone owns four classic cars and two classic motorcycles. He knows just how passionate people get when it comes to collecting cars.

“We all get so wrapped up in our cars,” he said. “Staying up late designing and spending all the money to make them perfect.”

Although he enjoys bringing the car to shows, his favorite thing is just driving it.

Desimone loves cars from the 30s so much his phone number even ends in 1930. He loves classics for their unique qualities and design.

“How can you be interested in the cars today? All of the shapes are pretty much the same,” he said. “You can change the color, put in a louder speaker or change the wheels but the shape is still common. But when these cars were built it was all about being unique.” 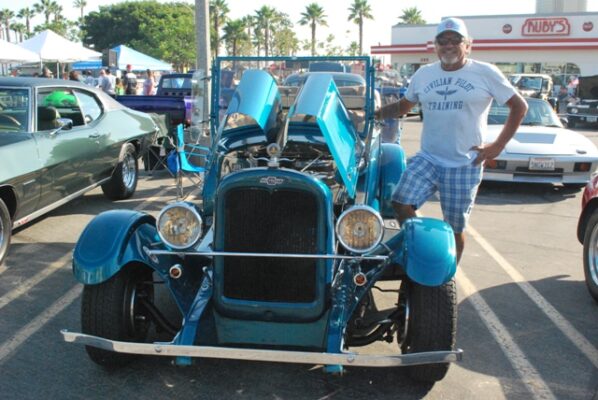 If there’s a show by the beach, Gil Talamantes will probably be there with his candy blue 1925 Chevy Touring Sedan.

“I have lived at the beach my whole life,” he said. “I hate to go inland for car shows…I would drive to Pismo Beach or even Del Mar for a car show at the beach.”

Talamantes has been coming down to Ruby’s for a few years now. He takes one of his four classics each week.

“I like coming down here because it’s a great environment,” he said. “It’s a wholesome family entertainment and I love when I can take my family down here.”

The wide variety of cars always peaks Talamantes interests and each week he sees something new.

“You can take one model car and do 50 things with it,” he said. “Cars are like houses, there is always something you want to fix or make better.”

Talamantes bought the Chevy as a project for he and his grandson. He wants the pass the hobby down and plans to get his granddaughter a car too.

“I’m going to make it safe and then let him customize it with flames or whatever he wants,” he said. “It will be his.” 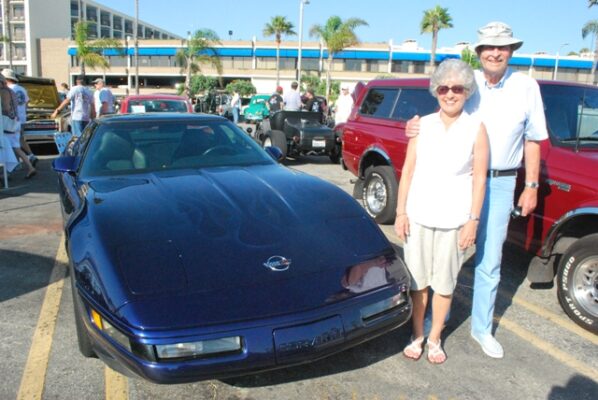 Bonniegay Bacon, with her husband, Walt and her 1995 Corvette Coupe. Photo by Carina Glasser

“This is my car,” proclaims female owner Bonniegay Bacon with a sweep of her hand. “It’s a girl’s car, and I was the one that asked for the ghost flames,”

Bacon drives a 1995 dark blue Corvette Coupe, ghost flames and all. She likes to come down to Ruby’s with her husband Walt.

“I’ve had this car since it was a year old and I’ve been bringing it down here for a couple years,” she said. “I love the car show and all the different cars, not just the Corvettes.” 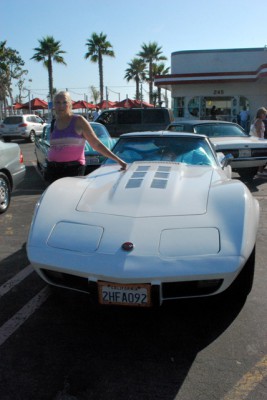 Jackie Harkey and her 1976 Corvette Stingray. Photo by Carina Glasser

Fellow female car owner and friend Jackie Harkey comes to see her friends as well as the cars. Harkey drives a white 1976 Corvette Stingray and she loves it.

“I’ve been coming down here for about ten years,” she said. “I like the music, the food, all my friends.” 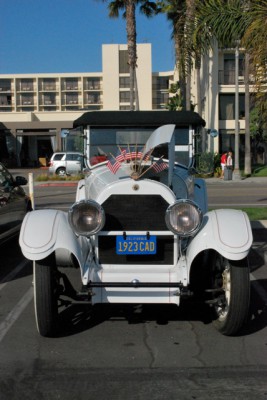 Across the parking lot was another pair of female car owners who met and became friends at the Ruby’s car show.

Tina Welch the owner of a baby blue 1970 Chevelle and Fabulous Phyllis the owner of a white 1923 Cadillac meet every week at the car show to enjoy each others company and the cars.

“I have just always liked classic cars,” Welch said. “I’ve been down here for about three years and we go to a couple other car shows together.”

Despite the fact that they are some of the only female owners at the show, they are anything but intimidated. Welch even admits to having as many or more pictures of cars than of her grandson.

“I say I have too much testosterone,” Phyllis said. “I like cars and I channel surf.” 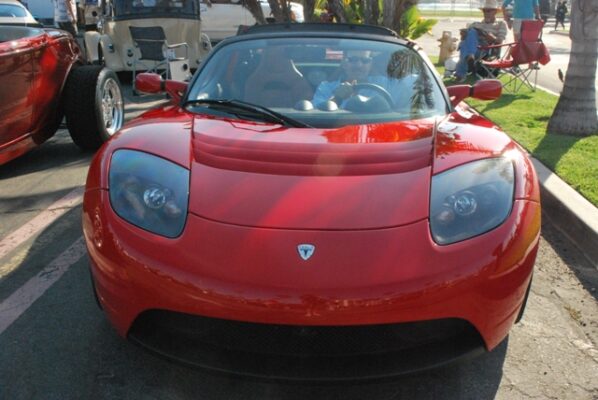 Randy Jackson and his Tesla Roadster. Photo by Carina Glasser

One thing you don’t see much of at the Ruby’s car show are electric cars, let alone electric sports cars.

Randy Jackson owns a bright red Tesla Roadster, which is a completely electric sports car. The electricity generated by the solar panels on the roof of his home charge the car.

“The Tesla has a range of 240 miles,” he said. “The longest trip I’ve takes is down to San Diego on one charge.”

He started bringing the Tesla to Ruby’s last year. He says most people like it, but some feel it doesn’t belong because it isn’t a classic.

“I use it like my cell phone, charge it at night and use it during the day,” Jackson said. “I never worry about running out of electricity.” 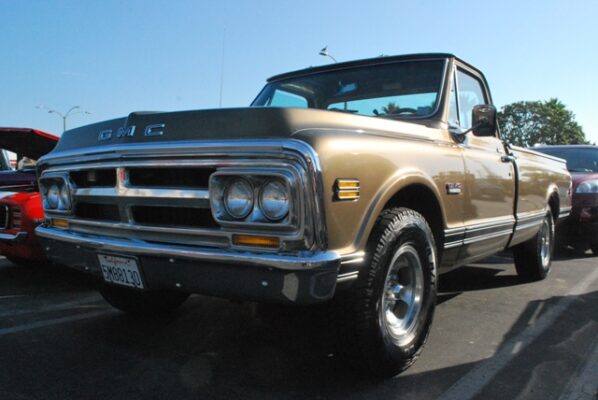 Another thing you don’t see much of is teenage car owners.

Seventeen-year-old McKenzie Jeffery was the youngest car owner at the car show. He loves his 1970 GMC Pick Up Truck.

Jeffrey is currently a junior at Redondo Union High School and he acquired the truck from his grandpa last year.

“I had to work hard in school, that was part of the deal I made with my grandpa,” he said. “I was hoping to get it by the end of high school, but I got it early.”

Not only does he bring it down to Ruby’s, but he also gets to drive it to school every day.

“People think it’s a clean truck and that I take good care of it,” Jeffery said. “A lot of people at school are jealous.” 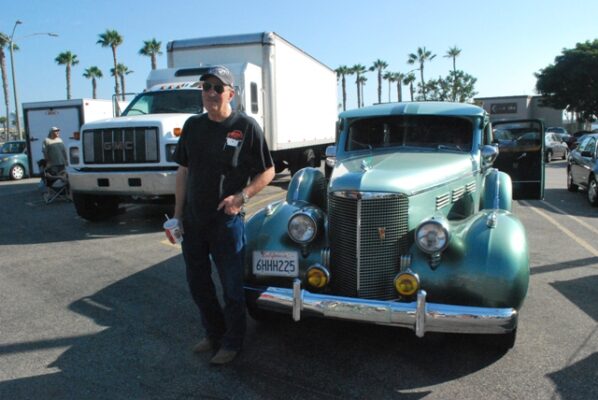 When Richard Tupper parked a 1938 Cadillac Fleetwood Limousine in the parking lot a crowd immediately gathered around it.

“I have had that car for 20 years and it needed to be restored,” he said. “The original length was five feet shorter but we stretched it.”

This classic was one of four that he brought with him that day. Tupper actually owns 109 classic cars.

“I used to walk to school in the late 50s and early 60s and I saw all these old cars go by that the rich kids had,” Tupper recalled. “I told myself if I ever get any money I’m going to have all those cars, and so I did.”

Many collectors hope to own four or five cars, maybe ten if the find money, time, and space. Tupper’s 109 cars are in the rarefied upper echelon of car collecting. He said he goes through a lot of polish.

He keeps his cars in two air-conditioned warehouses in Gardena. Tupper even turned one warehouse into a drive-in movie theatre. 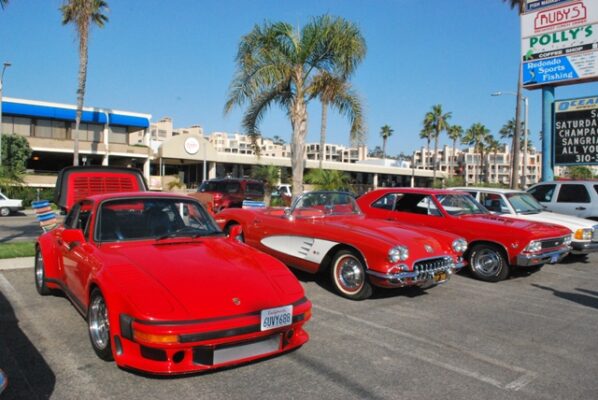 Every car he owns is 1959 or older and he works on them himself. Tupper’s favorite car color is red. He owns about 25 red cars. Three of those red cars accompanied the Cadillac Limousine to Ruby’s last Friday.

His collection will keep growing. His intention is to bring a different car to Ruby’s every week.

“I would never sell them,” he said. “They are like my children.”