Climate change could result in  a beachless Manhattan Beach 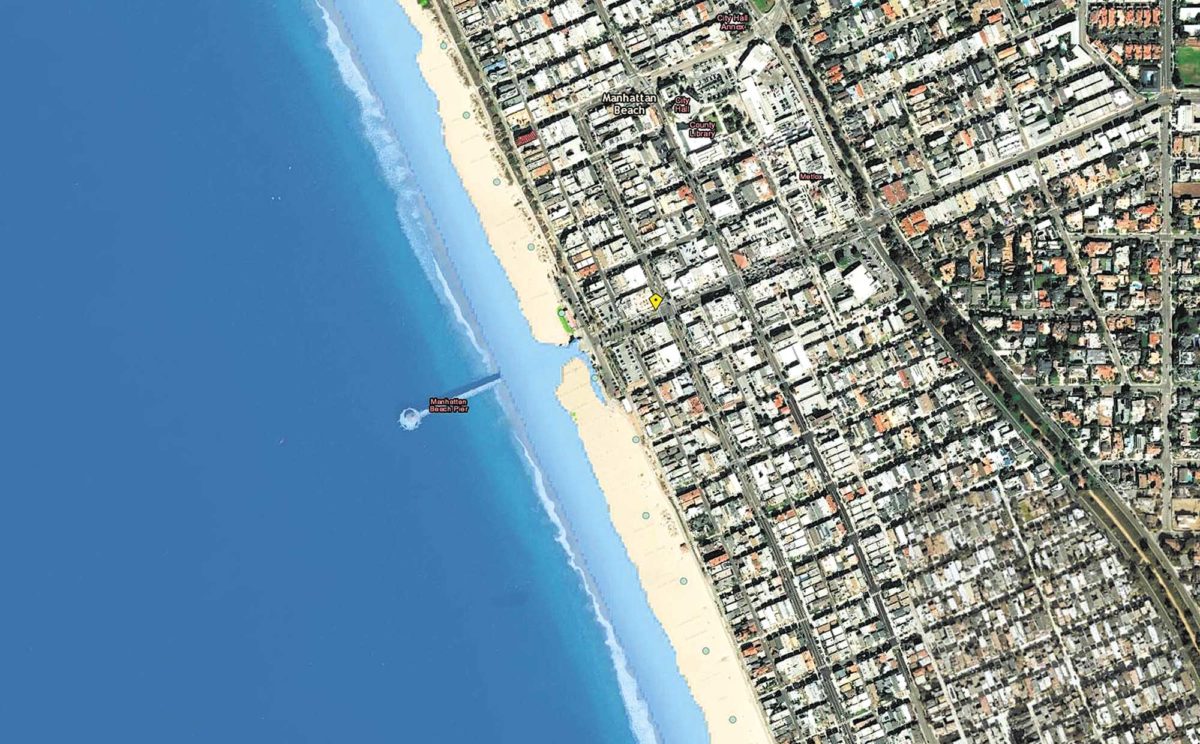 What Manhattan Beach will look like during a 100-year winter storm, which now happens with greater frequency, with three feet of sea-level rise. Current trends show a six feet sea level increase by 2100.  Model projection from the USGS Coastal Storm Modeling System

A week after delivering a buoyant State of the City address and a day before the end of her mayorship, Mayor Nancy Hersman Monday night led a town hall meeting on climate change that included an ominous look at the future of Manhattan Beach’s defining trait, its beach, and suggestions from a panel of experts about how to address an unfolding environmental catastrophe.

Hersman, whose tenure as mayor has been characterized by a thoughtful geniality and a longer look at the city’s history, confessed that prior to being elected to city council she’d given little thought to climate change. That has changed. She now drives an electric car and has solar panels on her house.

The facts of climate change and the devastation its effects will wreak globally and locally, the mayor said, are startlingly clear.

“We can’t ignore climate change any longer,” she said. “That is the purpose of this town hall.”

Hersman said that while attending the U.S. Conference of Mayors in Washington D.C. in January, she heard horror stories from several mayors whose cities are already being severely impacted by climate change. The mayor of Layfayette, Arkansas reported that his city historically had one major flood every 100 years; the city endured three major floods last year alone. The mayor of Baton Rouge, Louisiana lives in what was previously a no-flood zone; she was flooded out of her house for a year-and-a-half.

“What I took away from the conference is that we are far from alone in this climate challenge,” Hersman said. “It is being dealt with across the country and around the world. We all need to do our part to mitigate and adapt to our changing climate. And we need to work on this now.”

Juliette Hart, a researcher for the United States Geological Survey and former member of Manhattan Beach’s sustainability task force, began her presentation with forceful visual evidence of the changes that have already occurred in the earth’s climate. A series of slides showed a color-coded map of the Earth beginning in 1880 and proceeding to the present day. The globe began mostly blue and ended swathed in burnt orange. The colors represented changing global surface temperatures anomalies; NASA researchers say that the mean global temperature has increased 1.8 degrees Fahrenheit since 1880, a trend that has hastened dramatically over the past two decades.

“These are actual measurements. They are not models,” Hart said. “This what we have actually observed….In the last twenty years, we’ve seen this exceeding runaway warming. So the Earth is warming. Period. That is clear.”

Hart said that the conversation about climate change tends to be about the future — hot areas will get hotter, wet areas will get wetter, sea levels will rise, desertification will damaging crop growth, and ecosystems will change.

“But I would say this is already happening. We are seeing this today,” Hart said. “Everyone is seeing this. We don’t have to look very far.”

A slide showing Greenland’s ice mass reducing 281 gigatons a year was followed a few slides later by another showing sea-level rise along the Pacific Coast of North America. “Sea level rise is local,” the slide read. Hart then discussed a state report titled “Rising Seas in California: An Update on Sea Level Rise Science” which projects sea level rises between 2 and 12 inches by 2030, between 5 and 24 inches by 2050, and between 17 and 66 inches by 2100. Yet another slide used existing data tracked by the National Oceanic and Atmospheric Administration to show that already observed sea-level rise is tracking on the higher end of projections.

“That means the City of Manhattan Beach and all these communities by 2030 may be looking at a foot of sea-level rise,” Hart said. “By mid-century, two feet. By end of the century, potentially up to six feet of sea-level rise.”

Hart and her team at USGS are tasked with using existing data to model what the future will look like on the California Coast. She said that the impacts of sea-level rise go far beyond just the rise itself, but what it will mean for extreme weather events and so-called king tides.

“When communities are asked to think about sea-level rise, they have been sort of planning for just sea-level rise,” Hart said. “They’ve been thinking like, ‘Oh, by mid-century my house is okay because this is where the sea level is going to be. It’s all good.’ But what hasn’t been happening up until very recently is thinking about that additional level of exposure that happens when you have a big wave event and a big high tide.

“The water will go further up the coast. As it hits the cliffs and the bluffs, it’s going to erode the bottom of them and potentially lead to them collapsing. There are beach and safety issues. The water doesn’t go only over, it goes under, so there’s intrusion of saltwater into our groundwater tables…Lots of unfortunate kinds of things come along with [sea-level rise].”

Hart said that naturally occurring king tides, the extreme high tides that go far up the beach on average eight times a year (and last year at one point carved a channel almost the length of the Manhattan Pier), are a window into what the future will look like.

“This extreme high tide, which happens a few times a year,” Hart said, pointing at photos of the king tide reaching far up the beach, “will be a normal high tide twenty years from now.”

Hart said that the city is more fortunate than many coastal cities in that its ample beaches provide a buffer. But her message was clear: that buffer is about to drastically shrink.

“If you start to look at sea level rise and these big wave events,” she said, “now we see we are starting to lose some of the beach.”

Next week: What the city is doing to prepare, and what residents can do.