Colin Powell in Redondo Beach in 2005 speaks about Iraq, Putin, China, and Palestine 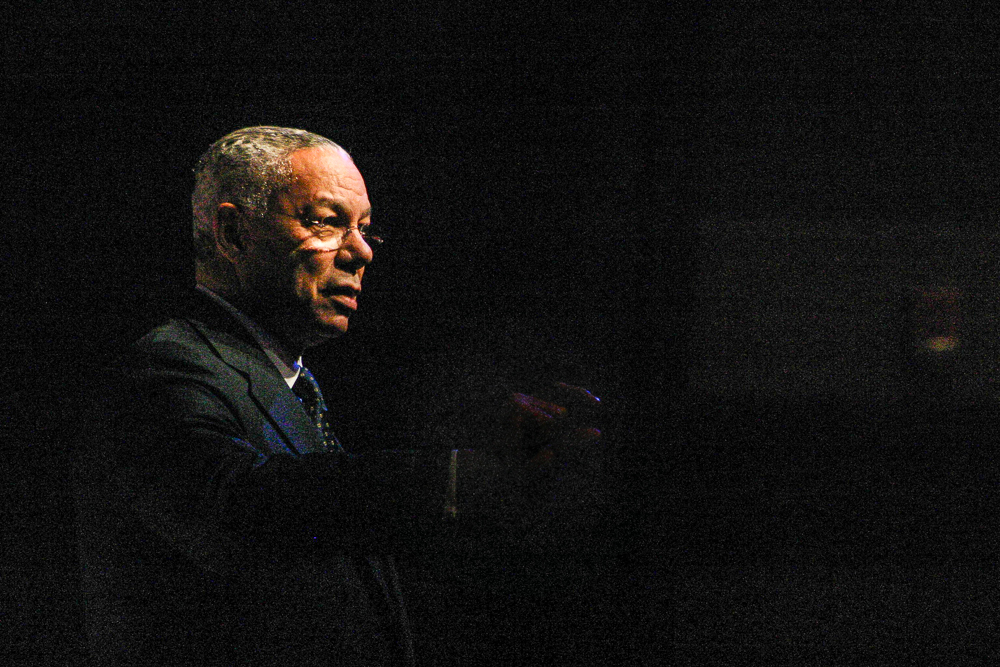 Powell passed away Monday, at age 84, of complications related to COVID. Though he had been vaccinated against the disease, his immune system was compromised by cancer and Parkinson’s, his family reported.]

“If you had been President would you have invaded Iraq?” Colin Powell was asked following a long, insightful and frequently humorous speech about U.S. foreign policy last Sunday.

Did the President lie?

Why the chaos following the invasion?

Can we win in Iraq with a volunteer army?

Why had he told Barbara Walters this talk to the UN about Hussein’s weapons of mass destruction was a “blot on my record?” 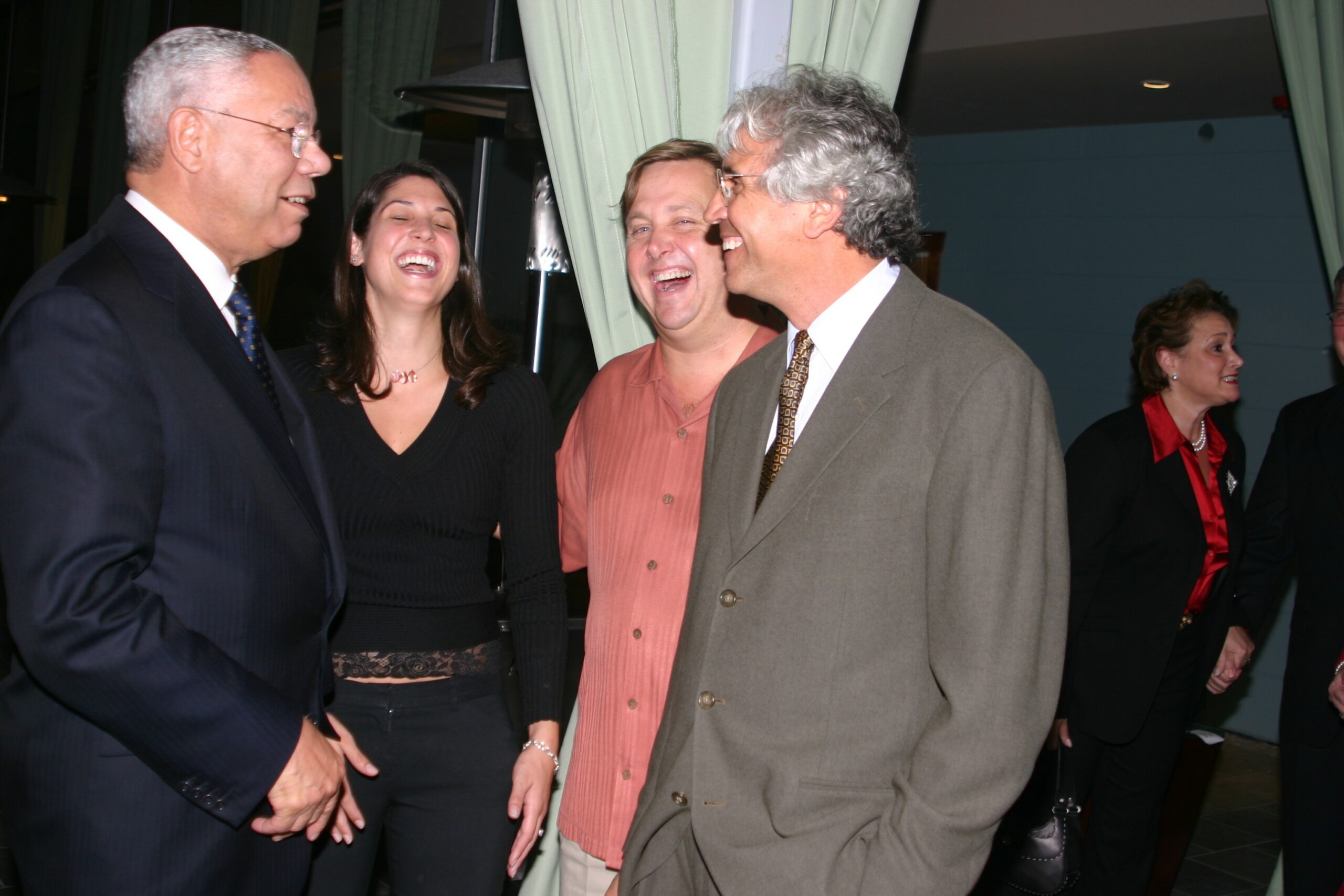 Colin Powell with Andrea and Michael Zislis and Andrea’s father Milo Bacic at the Zislis’ Shade Hotel, prior to Powell’s Distinguished Speaker address in 2005. Photo by Kevin Cody

Powell’s responses to the questions were uncharacteristically brief.

“In 2001 Saddam was shooting at our planes, so Clinton bombed him,” Powell said.

“President Bush was cautious about Iraq. My mission was to make sure sanctions stayed in place.

“Then 9/11 came and we went into Afghanistan. Then the President turned his attention to Iraq. What if terrorists hooked up with Iraq? The president started to make preparations.

“I told the President the consequences of an invasion, that it meant a long military presence. Let’s try to solve this diplomatically.”

“We took it to the United Nations for a resolution condemning Saddam, and asked for inspections.

“A few months passed and the president decided military action was needed.

Then, Powell, reverting to the language of an Army General, and intimating at why he does not seek the presidency, aid he told the President, “I don’t quit on long patrols.”

The chaos that has followed the invasion, Powell said, resulted from the U.S.’s failure, “to take advantage of the opportunity to put in place a system of order.”

The answer to the current situation, he said, is, “Build up the Iraqi forces, and keep the political process moving along.”

He cautioned against the illusion that this week’s vote on the Iraqi constitution will end the turmoil.

“We will be engaged in Iraq for a long time,” he said.

“We must stay the course. We can’t get weak knees, and walk away.”

But staying the course, he acknowledged, is complicated by the U.S.’s reliance on a volunteer army.

“I’m concerned about the size of the volunteer army. It’s being asked to do more than it’s designed to do. By next year we need to reduce the number of troops in Iraq. We can’t keep sending the same troops back.

“We need to increase the authorized size of the Army. But Iraq has cast a pall over the recruiting environment.

“Enlistment rates are down and divorces are up. We have a married army and families are starting to say to their servicemen and women, ‘You’ve done your share.’”

In response to the question about the “blot on his record,” Powell distinguished himself from the President he served with a clear, unambiguous statement.

“I’m sorry, I was wrong, but I didn’t lose sleep over it. The stockpiles of weapons of mass destruction were not there by the time we made that judgment in 2003.”

Which was not to say that he and the President lied when they cited weapons of mass destruction as justification for the invasion.

“Saddam wanted us to believe he had weapons of mass destruction… It was his intent to get those weapons,” Powell said. 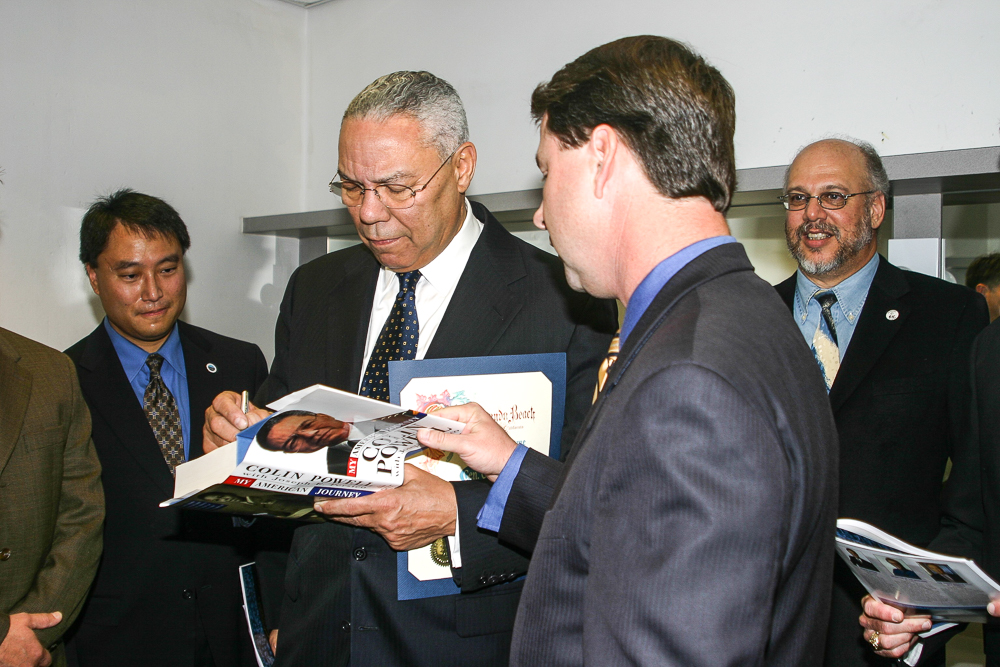 Colin Powell autographs his biography for Redondo Beach City Attorney Mike Webb, during a reception at the Shade Hotel, prior to Powell’s talk to Distinguished Speaker subscribers at the Redondo Beach Performing Arts Center.  Lookin are are Councilmen Mike Gin and Don Szerlip. Photo by Kevin Cody/Easy Reader

Powell’s observations about U.S. foreign policy in other parts of the world was more positive.

“Every nation in our hemisphere, except Cuba, is a democracy. We’ve tripled the amount of aid to sub-Saharan Africa, though we need to send more.”

“For the first time in 200 years, Europe is not facing war. No ‘ism’ is threatening its democracies. NATO has grown from 16 nations during the Cold War to 26. The Warsaw nations want to join NATO because they know their security rests with the U.S.

“The Germans and the French may disagree with us. I wasn’t too happy with the French. But they were there for us in 1776. We’ve been married for 230 years and been in marriage counseling for most of that time.”

Powell contrasted today with 1959, when he was sent to Europe as a young Army lieutenant.

“I was the platoon leader at Fulda Gap. My commander said to me, ‘See those two trees. Put your 40 soldiers down there and when the Russians come, stop them.’

“28 years later, I was sent back to Europe as commander of the 75,000 troop Fifth Corps. We were facing the same Russian 8th Guard at Fulda Gap.

“Then Russia changed the script. The script called for the leader of the Soviet Union to be a short, fat, bald guy with a homely wife, and an ill fitting suit. Mikhail Gorbachev wore French ties, great suits and had an affable, lawyer wife.

“Unlike previous Soviet leaders, Gorbachev looked reality in the eye and saw his country was living a lie. It needed economic development.

“We were suspicious when Secretary of State George Schultz, and I went to Moscow to prepare for President Reagan’s visit.

“I’m thinking, ‘You’re still a Commie.’ He sees the expression in my eyes, leans forward, smiles and says, ‘Ah, General, I’m so sorry. You need to find a new enemy.’”

“There’s a reason he’s fluent in German. He was a spy in Germany.”

Powell said he gives Putin high marks for rescuing Russia from the chaos it was descending into under Yeltsin. But he questioned Putin’s “understanding of freedom and democracy.”

“When I visited him last January I told him I had written an article critical of him for Izvestia [a Russian daily once edited by Nikita Kruschev’s son-in-law, Alexei Adzhubei]. He didn’t like that.”

“He packs the legislature, abuses the rule of law to go after people, and attacks the media.

“But we can’t lecture Putin. He is going to do what he thinks is necessary.”

“Russia’s leaders haven’t grasped the idea of a market economy. All they sell is oil. They make so much money on oil that it’s become a trap. It’s stopping them from diversifying.

“In 1976, Mao died. China’s new leader Deng Xiaoping looked reality in the eye and saw Mao was wrong. Power does not come out of the barrel of a gun. It comes from economic growth. Xiaoping said, ‘I don’t care if it’s a black cat or a white cat, as long as it catches mice.’ Now, China is our major economic competitor.”

Powell said his biggest concern with China is its relationship to Taiwan.

“If Taiwan moves toward independence, China will go to war. The U.S. must play a balancing role to keep that from happening.”

As evidence of a new, positive era in U.S. China relations, Powell recalled the 2001 incident when a Chinese fighter plane hit a U.S. reconnaissance plane. The Chinese pilot died and the U.S. crew was taken captive by the Chinese.

“The Chinese ambassador called and told me we have a crisis. The wife of the Chinese pilot had gone on CNN demanding that China be tough, and the Chinese couldn’t ignore public opinion.

“The ambassador told me the U.S. must apologize or his leaders would lose face. I said we didn’t do anything wrong, and that China should apologize. He said, ‘No, you apologize.’

“We went back and forth for one and a half days.

“Finally, the ambassador called back and said, ‘We are very close. Please, just apologize.’ I said, ‘No. But we are sorry.’

“He said, ‘I’ll get back to you.’ Then he told me his leaders were happy, but could we say just a little more.

“I said, ‘We are very, very sorry. That was it. Our relationship has been on the upswing ever since.

“We don’t like their human rights record, or their political system. But their response is ‘You don’t have 1.3 billion people.’

The only area Powell expressed pessimism over during his prepared remarks was the Palestinian state.

“Every president since World War II has broken his pick on this one. Arafat was impossible to deal with and Sharon is tough.

“The Israelis’ pull out of the Gaza strip was a positive step,” he said, but now the fear is “Palestine will become a terrorist state.”

Powell said that in his travels the anti Americanism he encounters is attributable almost entirely to U.S. policies toward Iraq and Palestine.

“There is still a reservoir of good will toward the U.S., but we need to be less preachy, less full of ourselves.

“We are a trusted nation, which is why people bring their problems to us. When I talk to people overseas, after venting, they ask for a green card,” he said. ER