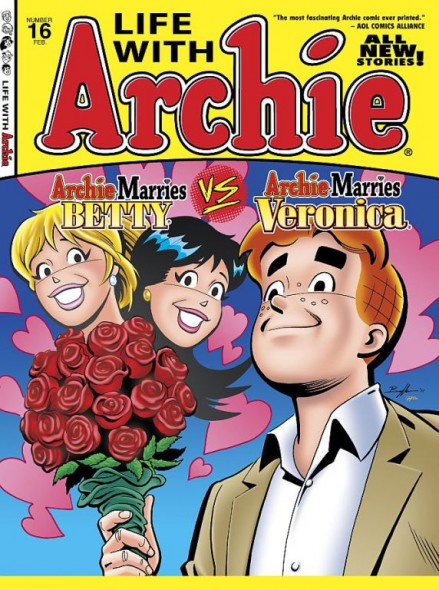 An Archie flip-book reveals the alternate realities of a marriage with Betty or one with Veronica. 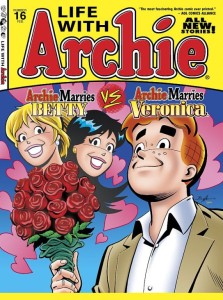 An Archie flip-book reveals the alternate realities of a marriage with Betty or one with Veronica.

Editor’s note: Our resident comic book geek helps find the perfect gift for that special someone, ages 3 to 103, who wears a Batman T-shirt (or onesie), and would run through a hedge to see “Sonic the Hedgehog,” or go through hell to meet “Hellboy.”

Happy Holidays everyone! Like geeks, comic books come in all shapes, sizes and ages. For your convenience, I’ve grouped this year’s picks by age:

SONIC THE HEDGEHOG (Archie Comics) & MEGA MAN (Archie Comics): I don’t know how the kids of today have learned about both Sonic the Hedgehog and MegaMan, but little ones are obsessed with these books. Even though they’re based on 20-year-old videogames, both titles are fun, contemporary and filled with colorful, exciting artwork that has an anime cartoon influence.

TINY TITANS (DC Comics) The perfect way to introduce your young ones to the wonderful world of super heroes!  TINY TITANS features the playground adventures of pint-sized versions of Robin (of Batman & Robin fame), Superboy, Kid Flash and others. Whimsical, funny and a fast bedtime read.

LIFE WITH ARCHIE (Archie Comics) It’s an age old question — will Archie pick Betty or Veronica? Well, in this flip-book, he gets to have his cake and eat it too! Each side of the magazine shows “what would happen” in Archie’s future if he married Betty or if he married Veronica. Two totally different outcomes, both fun for the whole family.

AMULET (Scholastic) From the publisher that brought us the all-ages favorite BONE, comes something a little — darker. After a family tragedy, young Emily, Navin and their mother move to an ancestral home to start a new life. However, the mother is kidnapped by a tentacled creature and taken to another world through a door in the basement, and Emily and Navin must travel to this fantastical land to rescue her! Soon to be a major motion picture starring Will Smith’s kids.

DC’s NEW 52 (DC Comics) Last September, DC Comics re-launched their entire superhero line with #1 issues. By the time you read this, the fourth issues will be dropping, and while they’re not all winners, some of these titles are some of the most exciting stocking stuffers you can find.

Highlights include BATMAN by Scott Snyder and Greg Capullo — a riveting, detective-oriented take on the character with fantastic artwork, WONDER WOMAN by Brian Azzarello and Cliff Chiang — a reinvention of the Amazon princess with a distinctive new look, AQUAMAN by Geoff Johns and Ivan Reiss — Aquaman?! But he kinda sucks right? Just don’t say that to his face or else you’ll learn firsthand what a bad-ass the king of the seven seas really is! JUSTICE LEAGUE OF AMERICA by Geoff Johns and Jim Lee. Johns and Lee are the star talent behind the entire re-launch and Justice League is the flagship book for the line. Blockbuster entertainment, big explosions and artwork from one of the industry’s top artists – watch how this new Justice League came together for the very first time! 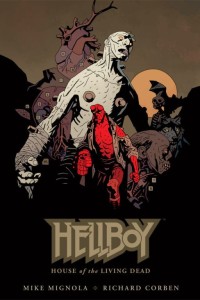 BATMAN: ARKHAM CITY (DC Comics) Based on the hit videogame and written by the game’s creator Paul Dini, Arkham City bridges the storyline of Arkham Asylum (the videogame) to the smash hit videogame Arkham City, and is the perfect gift for fans of the game. Get those kids off the joysticks and make them read!

UNCANNY X-FORCE (Marvel Comics) Wolverine! Deadpool! Psylocke! Archangel! Some of the edgiest “X-Men” characters come together to kill a reborn Apocalypse. But there’s a hitch — Apocalypse has been reborn as an innocent child! Riveting storylines from Rick Remender and some of the prettiest eye candy from the pen of Jerome Opena make this one of the best books on the stands.
Life Sized Geeks

HELLBOY: HOUSE OF THE LIVING DEAD Graphic Novel (Dark Horse Comics): Hellboy is dead. Long live Hellboy! This new graphic novel flashes back to Hellboy’s drunken romp days inMexicoduring the 1950s. Of course, it’s only natural for Hellboy to make a living as a luchador (masked Mexican wrestler) but the real fun happens when he enters the ring to fight the Frankenstein monster. Written byManhattan Beach’s own Mike Mignola with gorgeous yet creepy artwork from the legendary Richard Corben.

THE NEW TEEN TITANS: GAMES Graphic Novel (DC Comics) Decades in the making, this book re-teams Marv Wolfman and George Perez with the characters they made famous, The New Teen Titans! This is to comics what a Robert Plant/Jimmy Page reunion is to rock and roll. If your loved one was a collector in the 1980s, chances are he/she was collecting The New Teen Titans.

Coffee Table art books make fantastic gifts as well.  Here are some of this year’s best:

REBUS by James Jean (Chronicle Books) Best known as the cover artist for Vertigo’s FABLES, James Jean is an accomplished oil painter, and this 256-page tome collects some of his best work.

ART of MARVEL STUDIOS Box Set: This box collects the production and development artwork for the four MARVEL movies produced to date: Iron Man I & II, Captain America and Thor. All four books are hardcover and feature a fantastic look at all the hard work involved in bringing these titans to the silver screen. The box also includes a first-look poster for next year’s surefire Hollywood hit, THE AVENGERS!

STAR WARS: COMICS (Abrams Publishing) Wash away the bad taste of the latest changes George Lucas made to Star Wars with this eye-popping hardcover. The book collects some of the best Star Wars covers and pages from the 34-year history of Star Wars comics, but the real treat is the exclusive artwork that Lucasfilm commissioned from the top artists in the field to offer up their interpretations of this iconic galaxy. Also worth mentioning is last year’s STAR WARS: VISIONS (Abrams Publishing) that featured artists from outside the field of comic books.

And there it is! Even though places like Borders are shuttering their doors and folks want to fiddle with a Kindle, we’re very fortunate in the beach cities to have the buying options PAGES! a Bookstore in Manhattan Beach, Mysterious Galaxy near the South Bay Galleria, and of course The Comic Bug for all your comic book needs.

Give the gift of comics! Better than socks…