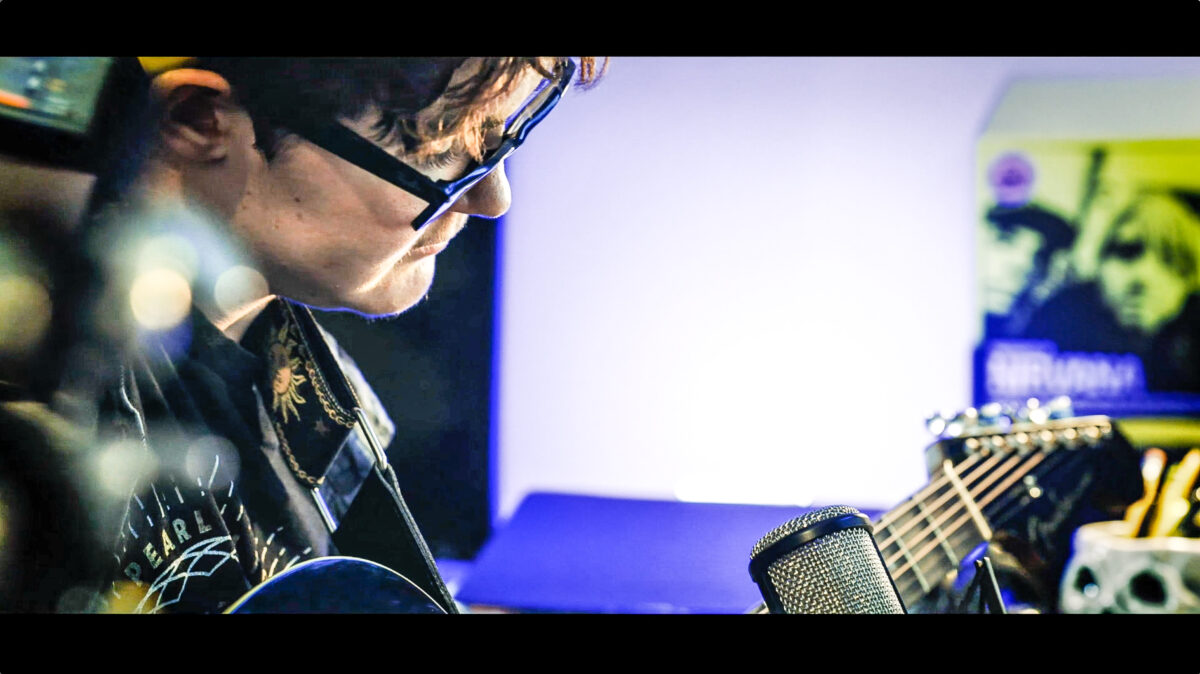 In a way, Jones is your typical 19 year-old, South Bay kid. In a way, he isn’t. He is preparing to attend CSU Long Beach this fall with plans of majoring in English composition. He is getting ready to go back into the recording studio to work on his fourth single. And, at the age of five, Jones was diagnosed with Duchenne Muscular Dystrophy (DMD).

“I’m working on a song about a porcelain doll,” Cooper said. ”It’s a broken doll with chipped paint that has been glued back together.  It started as a perfect doll, but under the surface it is even more broken than it seems.  My first release, ‘She’s Gone,’ is an alternative rock song about serial killer Ted Bundy.  It has its roots in negative influences, but I’m trying to incorporate imagery into the lyrics that aren’t too obvious and are not too easy to decipher.”

People who have seen Jones perform at the Lighthouse, Patrick Malloy’s, Tower 12, and Standing Room quickly recognize there is a depth to his music beyond the punk/pop melodies and catchy lyrics that will stick in your head.  His musical influences range from The Beatles to David Bowie, Nirvana to Alice in Chains, and Radiohead to Smashing Pumpkins.

In 2019, Jones was challenged by friend and rock star Jim Lindberg of Pennywise, to write, perform, and record his original songs.  When the pandemic began, Lindberg began mentoring Jones.

“After doing weekly Zoom songwriting sessions for nearly eight months, since the start of COVID, I could tell Cooper was really excited about the prospect of going into a professional recording studio and hearing his songs come to life,” Lindberg said.

“Salem blew me away,” Cooper said, “by how professional she was in getting her tracks laid down in just one or two takes.”  Also joining them was local bass player Slater Heidrich.

“It was a ton of fun to be in the studio,” Jones said., “thought the mixing process was challenging due to COVID restrictions. I was nervous at first, but once I got going I was surprised how easy it was.”

“It was extremely gratifying,” Lindberg said, “to watch Cooper grow as a musician through the process and become part of the long and storied history of songwriting coming out of the South Bay.  I can’t wait to see where he takes it from here.”

The musical challenge that Cooper accepted is a healthy diversion compared to the physical challenges he battles every day. DMD (Duchenne Muscular Dystrophy) is a particularly nasty form of Muscular Dystrophy, affecting mostly boys.  It is a degenerative disease that is increasingly debilitating. Despite this, Jones remains strong and clear, his songs are crisp and deliberate, and he maintains a positive attitude.

“There have been many breakthroughs in gene therapy within the past 10 years,” Cooper said. He is hopeful science will catch up to him.

Reflecting on his situation, he said,, “Songwriting is something I can fully participate in, outside of sports.  It’s wonderful to find something that I not only enjoy but excel at. I’ve come to realize that I have a passion for music and I’ll always be able to write songs.”

”This musical journey has helped so much with Cooper’s confidence,” his mom Cathy said. “We owe so much to our South Bay community.  It’s a very special place, where everyone takes care of each other.   Jim Lindberg who has been there for us since the beginning.  He’s a great friend and he is largely responsible for lighting the fire under all of us, providing endless encouragement.”

Another South Bay musician  Jones has started to work with is Tom Watson. The guitarist has played in  Toxic Shock, Slovenly, Overpass, The Red Krayola, and with Mike Watt of Minutemen.

“Working with Cooper has been a blast,” Watson said. “He has a very clear picture of what he wants to get done.  His songwriting and guitar playing improve every time we meet up.”

This summer, Jones and Watson will record their first song together.

“Tom has pushed me into playing more lead guitar,” Jones said. “He’s totally different from my other music teachers.  Tom is more of a noise kind of guitarist who doesn’t follow traditional rules.”

Jones’ upcoming gigs include  Epipalooza (@Epipalooza_LA), benefiting those with epilepsy on June 19 at South Bay Customs in El Segundo. Additionally, he will be playing at a fundraiser on July 10 that benefits the Center for Duchenne Muscular Dystrophy at UCLA.

”I’m very lucky to have the opportunity to do something I enjoy,” Jones said. “I know there are a lot of other people out there who haven’t had the same opportunity that I have.”

Jones’ songs can be purchased through most major online outlets. For more information visit the site: cooperscure.org. ER