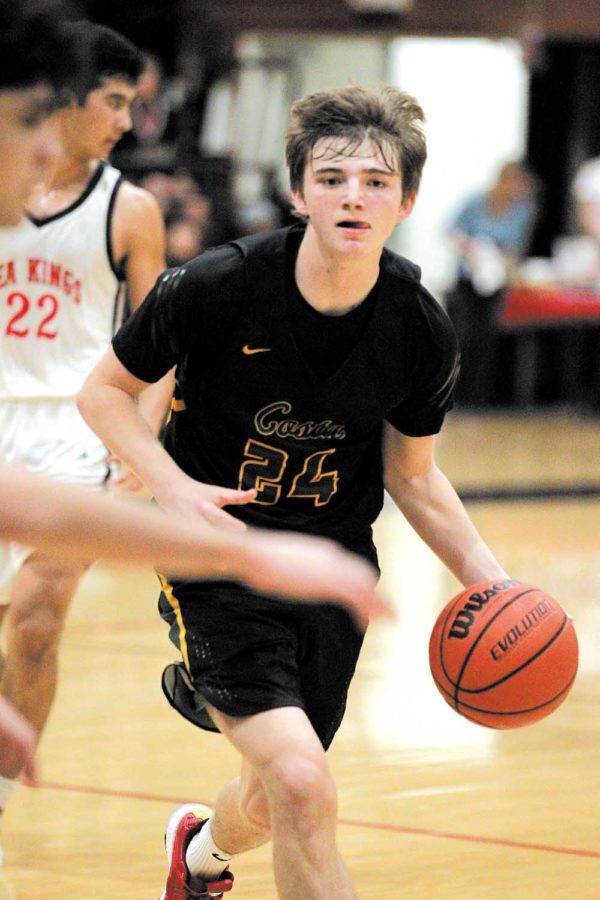 Mira Costa freshman Will Householter led his team with 20 points and 10 rebounds in victory over Palos Verdes High. Photo by Ray Vidal

It only took two games over four days for the Mira Costa boys basketball team to send an unspoken-but-unmistakable message to seven-time defending Bay League champion Redondo: you better take us seriously this year.

After suffering through too many years of Bay League non-contention while their backyard neighbor dominated the rivalry and the league, the Mustangs knocked off pre-season favorite Peninsula 56-44 last Tuesday and then scraped by another pre-season powerhouse, Palos Verdes, by one-point Friday night in a 50-49 nailbiter.

Tuesday night, Costa improved its record to 3-0 by defeating Leuzinger. Redondo fell to Palos Verdes High Tuesday, leaving them with a 2-1 record. Next Tuesday, the two rivals will play at Sea Hawk Pavilion in a game that may determine the league champion. The second rivalry game, the last game of the regular season on Feb. 6, could be decisive. It will be played on Costa’s home turf.

What was most impressive about the Mustang’s two wins in four days was the different ways they went about beating two teams that were projected to overwhelm them with their size, depth, and experience.

Against Peninsula, the Mustang’s senior leader and best shooter, pint-sized guard Tyler Antrobius, had a career night and drilled six 3-pointers on his way to a personal best of 30 points. The game took place in the Mustang’s personal playpen, the Manhattan Beach Middle School gym, which was never intended to host varsity-level games and tends to make visiting teams uncomfortable with the screaming fans right on top of the court.

But four days later, when Antrobius had a sub-par shooting game against PV and was even subjected to an “overrated” chant by the home crowd while he was shooting free throws, freshman Will Householter stepped forward to lead them with 20 points, 10 rebounds and several loose balls that he recovered on sheer scrappiness and will power alone.

“It shows that we don’t rely on anyone player to carry us, that we have a bunch of guys who can put up points on any given night,” said second-year Mustang Head Coach Neal Perlmutter, who is attempting to replicate the quick chumps-to-champs turnaround he pulled off at West Torrance a few years ago. “We go 12 deep and they all can play on this level.”

The PV game was played in front of a loud and demonstrative Sea King crowd that expected their team to continue its winning ways with several veteran leaders, including bruising forward William Engstrom.

Engstrom led the Sea Kings to a quick 7-6 lead in the first quarter, but the Mustang’s depth helped turn it around. First Dylan Black, a freshman who is emerging as the team’s second-best shooter behind Antrobius, came off the bench to drill a corner 3-pointer. That was followed by another trey from a bench player, junior guard Alex Cortez.

The second quarter began with the score 13-13 when Householter caught a sweet pass from senior point guard Max McCalla for a nifty layup and junior forward Richard Kick hit a free throw. Then Antrobius stole the ball, raced coast-to-coast for a soaring layup and nailed the foul shot — despite the heckling — for an 18-13 Costa lead.

The two teams exchanged the lead several times before Black hit yet another trifecta for a 22-20 Mustang lead. Householter added a three-pointer of his own and Costa clung to a 27-23 halftime lead.

The second half displayed all of Householter’s emerging talents. Just 6 feet tall, he’s not the Mustang’s best shooter, or even their second best. He’s not their best passer or ball-handler — McCalla is. But he is their best defender because he’s willing to stick his nose into the rebounding scrum and he has the quickness to check his man all over the court. On offense that same quickness enables him to turn the corner and get to the bucket on drives, plus he has an uncanny nose for loose balls and rebounds that seem destined to end up in someone else’s hands but instead end up in his.

It was 34-33 Costa at the end of the third quarter, and the noise and the tension in the packed Sea King gym grew as the game roared to a climax. Tied at 42-42, Antrobius – whose shot wasn’t falling – made two great passes for scores, first to McCalla and then to Householter for a 46-42 lead.

After scoring a bucket, Engstrom fouled McCalla as he brought the ball up-court and the crowd groaned at the call. McCalla calmly swished two foul shots and the lead grew to 48-44.

PV scored again, and again McCalla was fouled and sank two foul shots for a 50-46 lead. “Max’s foul shots at the end were huge for us,” Perlmutter said. “That was great senior leadership.”

With the always-intense Perlmutter loudly reminding his players not to foul, they kept their hands to themselves and watched as PV sank a 3-pointer at the buzzer for the final one-point margin.

When the homeless Mustang basketball program moves into its new $38 million athletic complex next fall, both the boys and the girls teams will have a future as bright and shiny as the new building. The boys team features three freshmen in key roles: Householter may already be its best player, Black shows all the makings of a dead-eye shooter and 6-foot-3 Jude Harris looks like a future post monster. 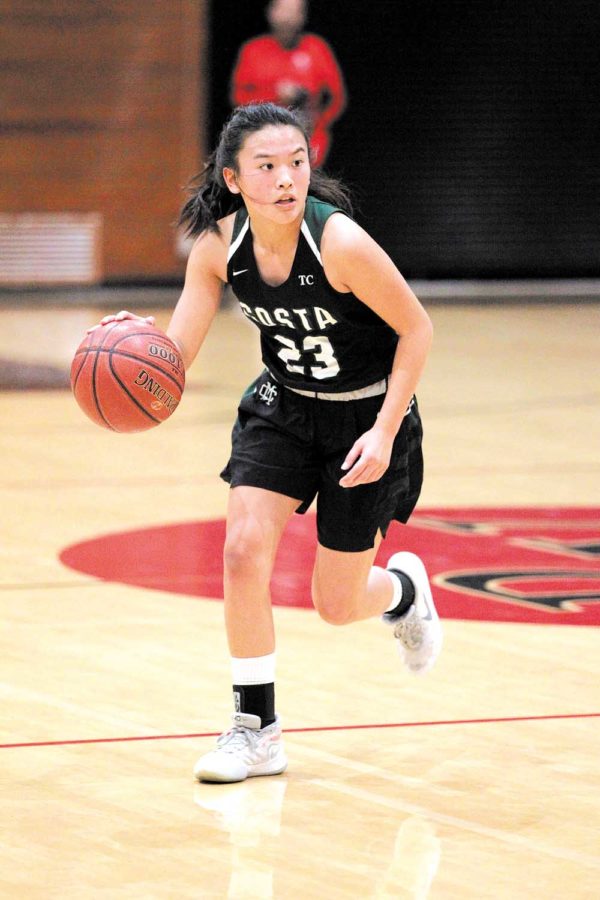 Costa frosh Maile Nakaji led her team to an 11-6 record with victory over Palos Verdes High. Photo by Ray Vidal

And the girls team — which beat PV to run its record to 11-6 – is led by freshman Maile Nakaji, a 5-foot-5 point guard with a smooth handle, sweet jumper and the quickness to get to the hoop whenever she wants to. 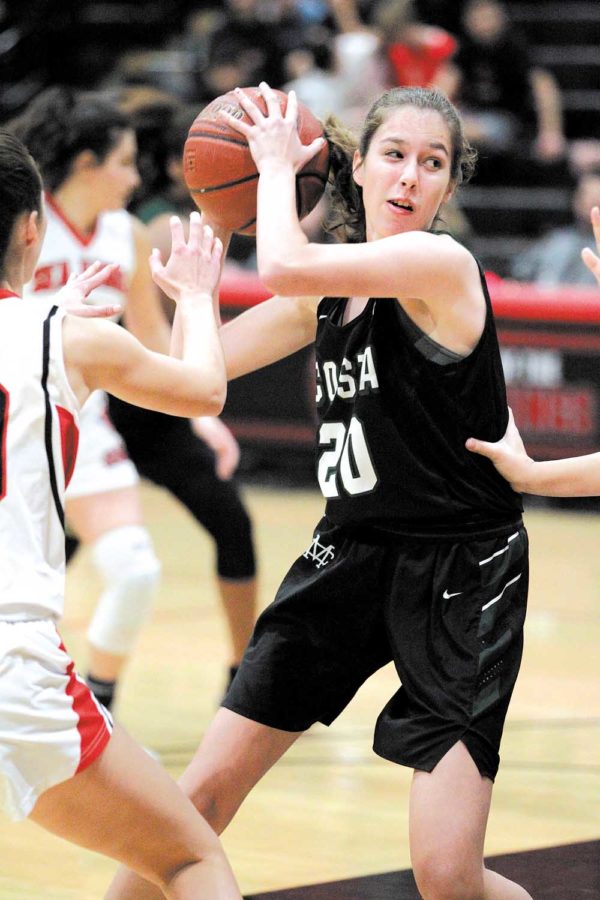 Sophomore Winslow Smith is one of the Mustangs four promising sophomores. Photo by Ray Vidal

The Lady Mustangs also feature four talented sophomores – post players Winslow Smith and Hannah Gedion as well as wings Bella Blum and Cara Susilo – who will give them a solid foundation for years to come.