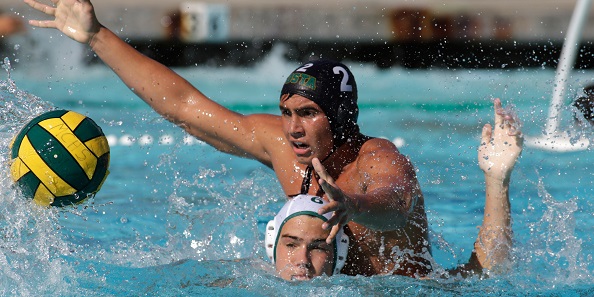 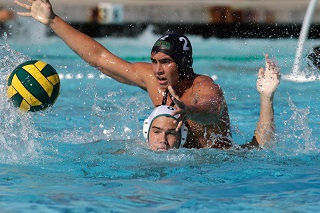 Senior Alex Nahabed, top, is one of four team captains leading Mira Costa in it quest for Bay League and CIF titles. Photo

Coming off a 10th-place finish in the 32-team America’s Finest City tournament in San Diego last weekend, Mira Costa’s boys water polo team is prepared to make a run for another Bay League title but there is a new challenger hoping to dethrone the Mustangs and perennial power Palos Verdes.

Redondo is off to a fast start this season with two tournament championships and should be in the mix for the league title. Mira Costa is ranked No. 16 in the combined CIF-Southern Section Division 1 and 2 poll and hosts Redondo (No. 3, Division 4) on Thursday, Sept. 28 at 3 p.m.

Mira Costa went 3-2 in the AFC tournament routing Ocean View, 17-1, losing a 6-5 heartbreaker to Carlsbad then rebounding to defeat Los Osos 7-6 and Poway 13-9 before falling to Damien 9-6.

“The AFC tournament was fun and we played well,” said Jon Reichardt who is in his 20th season as Mira Costa’s head coach. “We learned a lot and starting to play more like a team.”

Reichardt, who has led the Mustangs to four CIF titles in six appearances in the finals, expects a close game with rival Redondo.

“In order for us to play well against Redondo we need to play great defense and keep up our team play. I’m not surprised about about Redondo’s start as they have a lot of quality players plus they are in Division 4 so they should win that championship with no problem.”

Chalk, an attacker, is a three-year varsity starter and, at 6-foot-6, Matt makes his presence known as the Mustang’s goalkeeper.

The Mustangs will then compete in the South Bay Tournament Friday and Saturday, Oct. 6-7. 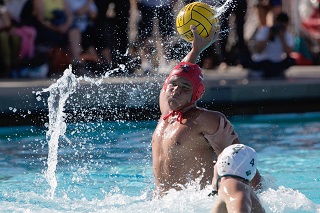 Redondo finished 20th in the AFC tournament losing to Redlands East Valley 9-1, defeating South Pasadena 7-3 and Grossman 7-6, the dropping a 9-2 game to Punahou (Hawaii) before losing to Temescal Canyon 9-8 in overtime.

“I’m very proud of our team,” Redondo coach Chris Murin said. “In the finals, we came from three goals down when Blake Vogelsang shot with no time left on the clock to sene the game into overtime.”