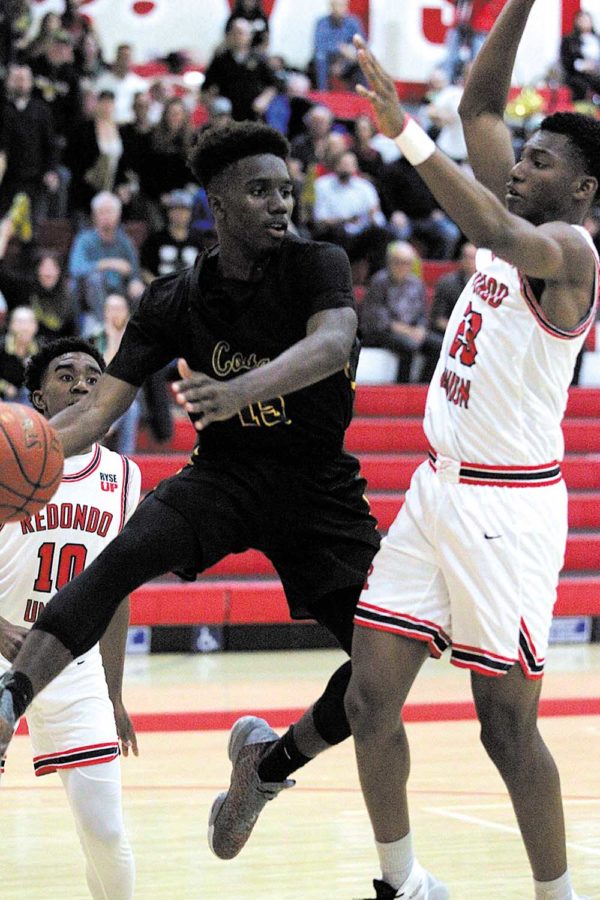 Mira Costa’s Matt McCammick will play key roles in the Costa-Redondo rematch Thursday night, as he did in last month’s back-and forth thriller. Costa prevailed 52-48. Photos by Ray Vidal

Mira Costa and Redondo Union will head into their Thursday night boys basketball showdown at Da Vinci High in El Segundo with even more motivation than is customary for a rivalry game. (The game is at Da Vinci because Mira Costa’s new gym is under construction).

Redondo is still smarting from its four-point loss to the Mustangs last month – the first win for the Mustangs over the Sea Hawks, after 14 straight losses, since 2012, while Mira Costa will be looking to make history by completing an undefeated 10-0 season and grabbing its first Bay League title in 20 years.

For his part, second-year coach Perlmutter said the final record isn’t as important as winning the league title for the first time in a long time.

“It really doesn’t matter if we end up 10-0 or 9-1,” he said. “The important thing we’ve done is send out a message: there’s been a culture change in Mira Costa basketball, and it’s a new day in the Bay League.”

With three freshmen, one sophomore and three juniors in its 10-man rotation, the Mustangs are set up to compete for Bay League championships for years to come.

When Mira Costa coach Neal Perlmutter heard Leuzinger’s Amound Anderson — the Bay League’s top scorer – was not playing Friday night he knew the good news could quickly turn into bad news. He warned his players that the unexpected news could hurt their intensity and effort, the two traits that had carried them to the top of the league with a 7-0 record while Leuzinger lagged near the bottom with a 2-5 record. 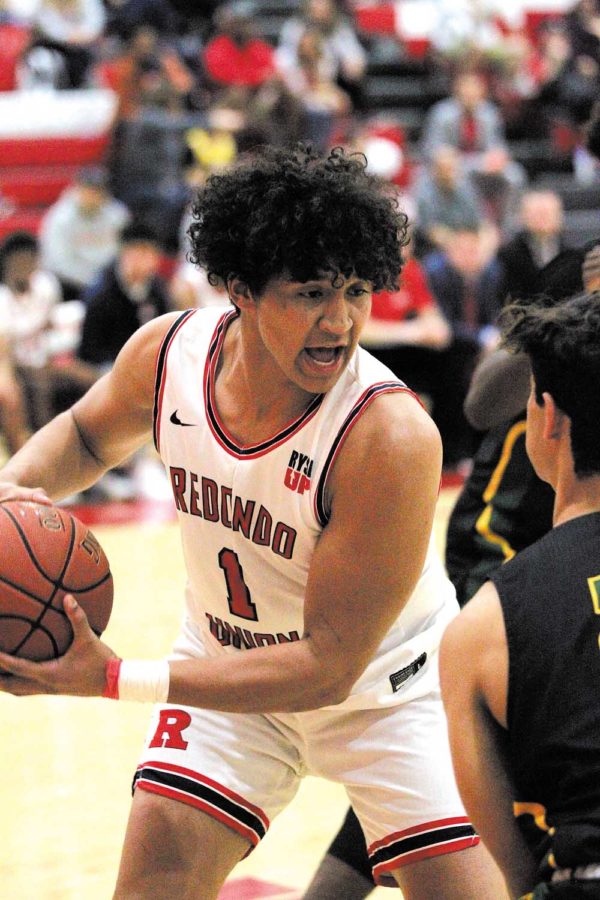 “I told the kids not to relax, not to take it easy, just to play our regular game,” Perlmutter said moments after his team defeated Leuzinger 64-47 Friday night. “But they played lackadaisical anyway, missed a bunch of layups, and played lazy defense, just like I feared.”

Indeed, at first, the Olympians seemed inspired by the loss of Anderson, who was averaging 28 points per game before going down with what his coach Arturo Jones called “a really bad sickness. That’s what it takes to keep him out of a game. Amound is a tough kid and he loves to play.”

Leuzinger raced out to a 7-2 lead, forcing Perlmutter to call a timeout to settle his team down. But the Mustangs still played sluggishly, letting drivers blow by them and missing bunny after bunny even while they were controlling their offensive boards.

The Olympians continued their surprising charge behind the coach’s son, Amire Jones, a freshman point guard with a slick handle and solid jumper. Their lead grew to 17-9.

After yet another timeout, the Mustangs came out fired up and played like the team that has dominated the league, not the team that opened the game sleep-walking through the motions.

It started with a Matt Cammock power drive that cut the lead to 17-11 at the end of the first quarter. The second quarter opened with Mustang freshman Dylan Black nailing a corner 3-pointer followed by another freshman, Will Householter, coming out of the rebound scrum under his own basket and banking in a stick-back that cut the Olympian’s lead to 17-16.

Senior point guard Max McCalla threw a full-court pass to junior forward Richard Kick for a breakaway drive and just like that Costa had its first lead at 18-17.

With their defense dialed in and stopping Jones on every penetration, Householter hit a trifecta to build the lead to 21-17. The 12-0 run was completed when McCalla swished two free throws for a 23-17 lead that forced Leuzinger to call a timeout.

By then it was too late for the Olympians to regain their momentum. The game’s dynamic had completely turned around in that five-minute span.

The win was exhilarating for Perlmutter, his team and the legions of fans who made the short drive over to Da Vinci High in El Segundo to witness the Mustangs continue their push for an undefeated Bay League season, a feat that hasn’t been accomplished in more than 20 years – and a feat that neighboring Redondo had pulled off in five of the last seven years on its way to seven consecutive league titles.

With an 8-0 league record, Costa is now assured of at least a share of the league title, and only then if they lose their last two games – to Compton Centennial and Redondo – and Redondo wins its last two. That would leave both teams with an 8-2 league record.

Such a finish is remote, however, considering that Centennial is the league doormat and doesn’t have a single league win.

The Lady Mustangs, meanwhile, continued their own great season. They beat Leuzinger 54-36 behind the stellar board work of co-captain Kim Waller, the floor leadership of freshman Maile Nakaji and the long-range bombing of co-captains Skylar Herdman and Ella Erich. Their overall record now stands at 18-8.